Korean Behind The Bib Bib Gourmand

Passerotto from chef/owner Jennifer Kim is one of the newest recipients of the Bib Gourmand designation in Chicago. The restaurant just opened in May of this year, but "elegant presentation and delicious flavors make this a wonderful new Bib Gourmand in Chicago," state inspectors. It had been a goal of Kim's for the past three years to earn the distinction and she was ecstatic upon hearing the news. "Bib Gourmand really fits with the type of food and service that I'm creating," she says. "It's about accessibility."

Kim doles out Korean food with hints of Italian and Midwest influences, reflective of her upbringing. Menu highlights include bay scallops with homemade XO sauce, soy onion purée, and citron; Pelicana chicken with Calabrian chile, cauliflower, and carrot; and ddukbokki with rice cakes and lamb ragu. Though the menu includes some more traditional items, such as kalbi, Kim fought hard not make it a cookie cutter Korean restaurant. "Food is such an instrumental part of Korean culture," she shares. "Let's explore other parts of this cuisine." 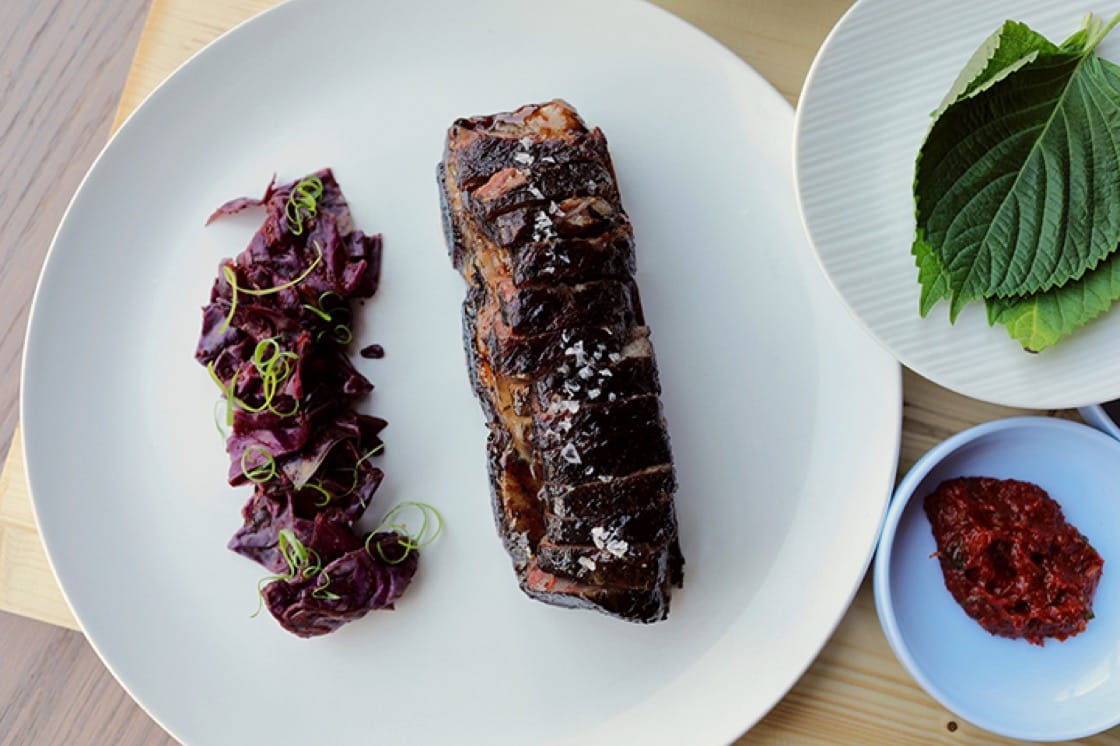 Kalbi is served with seasonal banchan and Mama Kim's kimchi.

As a first-generation Korean-American, she and her brother had certain expectations placed on them as to what their lives would look like. The Chicago-area native enrolled at University of Illinois at Chicago with the intention of becoming a pharmacist, but soon learned that pharmacy was not the path for her. Afterwards, she did some traveling, partying and soul searching to find her calling.

Somehow Harold McGee's On Food and Cooking found its way into her hands. "That was the first time I saw food as a science because I think up until that point I just thought of food as sustenance," says Kim. Pharmacy originally drew her interest because it was methodical and science-based, but then Kim's interest shifted to exploring careers in food. 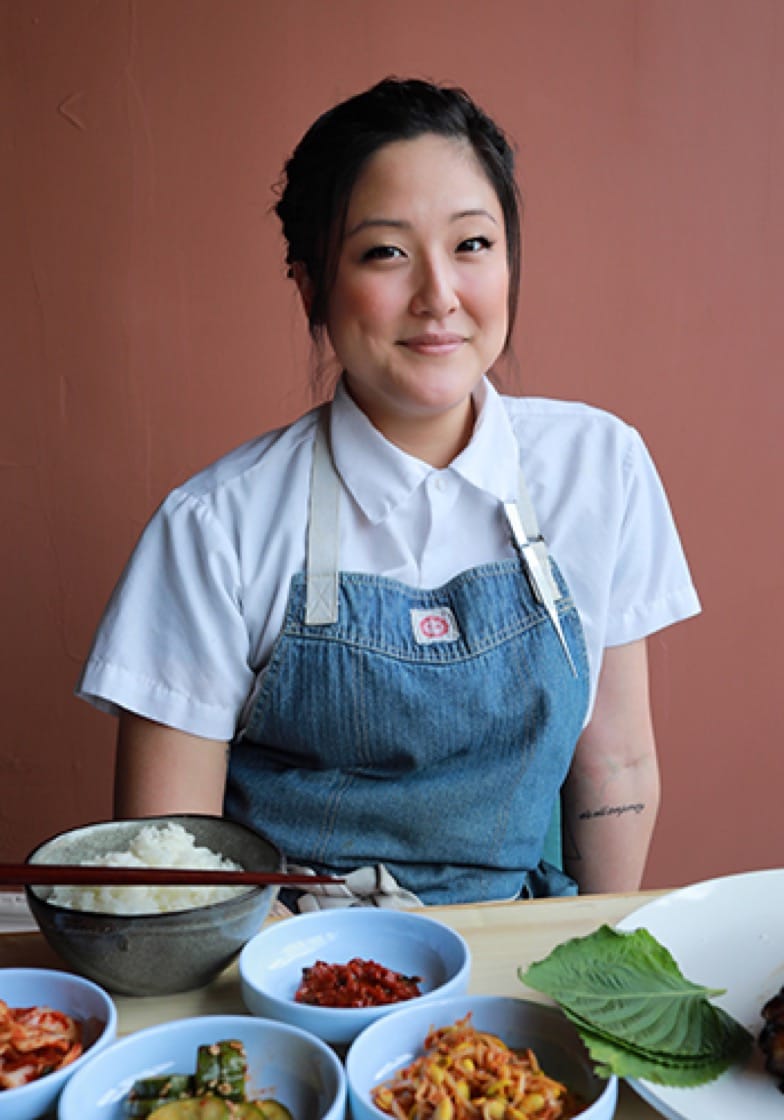 Kim entered Kendall College around the turn of the decade. "The minute I got into the kitchen it was like, 'this makes sense—this feels like home.'" She simultaneously started working under David Posey at Blackbird and stayed there through graduation for about two and a half years total. She then traveled to the south of France to spend a summer at the one-Michelin-starred Le Bistro des Saveurs to learn pastries—an area she felt she was lacking in at the time—and to experience a different culture, way of life and how kitchens operated in a different country. Upon returning to Chicago, Kim spent time at Avec and Nico Osteria before opening C Chicago and then Snaggletooth (both with Bill Montagne). Snaggletooth, which was always meant to be temporary and a learning experience, then lead to Passerotto.

Kim believes that every cook at some point wants to open their own spot—and she has known that she wanted to work for herself since she was four years old—"but you don't really have an idea of what that looks like [early on in your career]," she shares. "This is the restaurant that I always tell everyone took me all of my life to fully realize."

Kim's parents immigrated to the U.S. in the mid '70s and she spent her childhood in the predominantly white suburb of Schaumburg. "Growing up I've always had to struggle with having a dual identity [of being both Korean and American]," she shares. "You're taught to hide the aspects of yourself that make you different. That's followed me all my life and I've struggled with re-falling in love with aspects of myself that make me different." Kim continues, "This restaurant is me reaching the point in my life where I can be very proud of having both a Korean heritage and an American heritage."

Passerotto is Kim telling the story of how the food she's grown up with has changed and shaped her life. "It's so interesting to see how food changes generationally. [...] I ultimately wanted to share my family's story of what it's like to be Korean-American or an immigrant within this time and period." 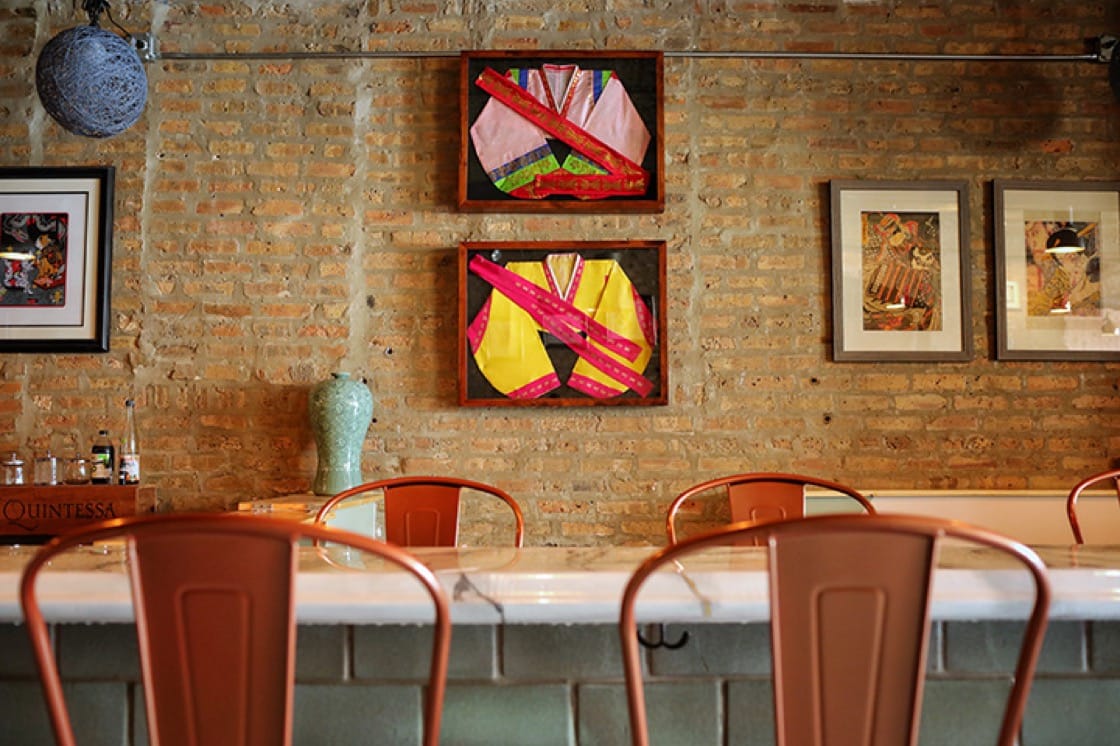 Passerotto is also for the neighborhood of Andersonville. "That neighborhood really understands what it means to support small businesses," which was of particular interest to Kim in that the restaurant was primarily self-funded. Additionally, Kim shares that Korean culture is very communal, so being part of a community that she and her team could stand behind and wanted to be a part of was vital.

And last, but not least, Passerotto is for her team. "As we talk about restaurant culture—and some of the very toxic and hurtful things that can happen within restaurant culture—we wanted to create an environment that is open, safe and very inclusive for all underrepresented and marginalized groups of people."

"Representation does matter. It's not about giving opportunities to certain communities of people, but creating opportunities for them to showcase talents and skills that they're not always recognized for." Kim built a team with that in mind and examined potential employees holistically "to hire just good human beings." 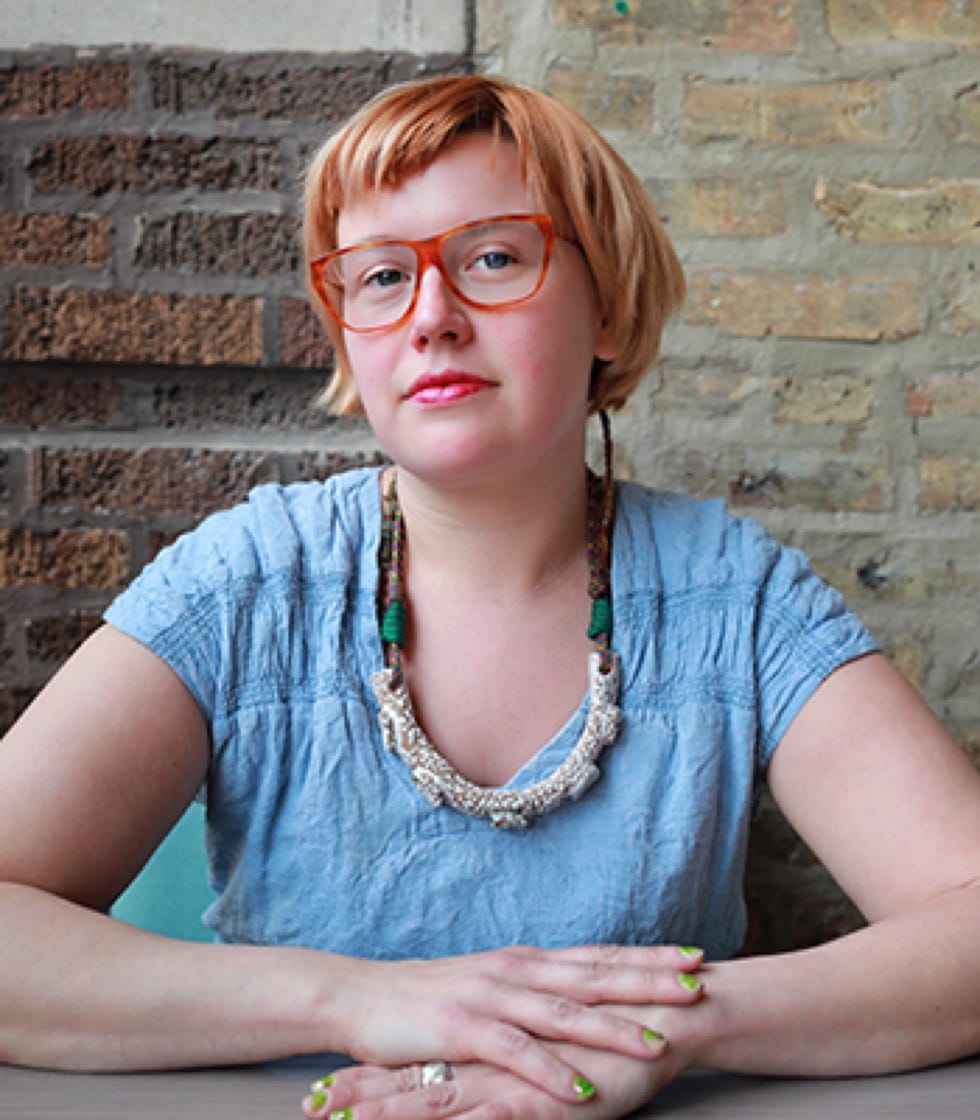 Kim's partner in day-to-day operations is general manager Tegan Brace (pictured right), whom Kim calls a "tour de force." The two share a common understanding of what they're trying to create. "When I met Tegan, I think that's when everything really started clicking for me." Kim continues, "I credit [Brace] with so much of the success of the restaurant because she's so good at her job (and such a wonderful person)."

Brace is a visual artist by training, but gained hospitality experience from a couple of Windy City wine bars, and has been with Kim since a few months before the restaurant's opening.

The kitchen staff is made up entirely of people that Kim has either worked with previously or knows to some extent. "With a restaurant that's so deeply personal, it's important that the people that work here also have an emotional connection to it as well. We're trying to create relationships with people through food, so it's easier to understand the message we're trying to convey for people that know me." (The four-person back-of-house team, including Kim, also happens to be all female—a "happy accident.")

When it comes to front-of-house staff, a similar story is true in that everyone either worked with Kim or Brace previously or is a friend-of-a-friend. This creates a certain level of honesty and trust throughout the entire team that is palpable to guests. "That's sort of what makes the space so special."

Though in the beginning the restaurant was very much a reflection of Kim's story, since opening it has shifted to be a more collective representation of the team's relationship with Korean food. "It's evolving into something that is bigger than myself and outside of myself."

"Cooking has always been the most rewarding thing in my life thus far, but having this space with these people is such a wonderful feeling." 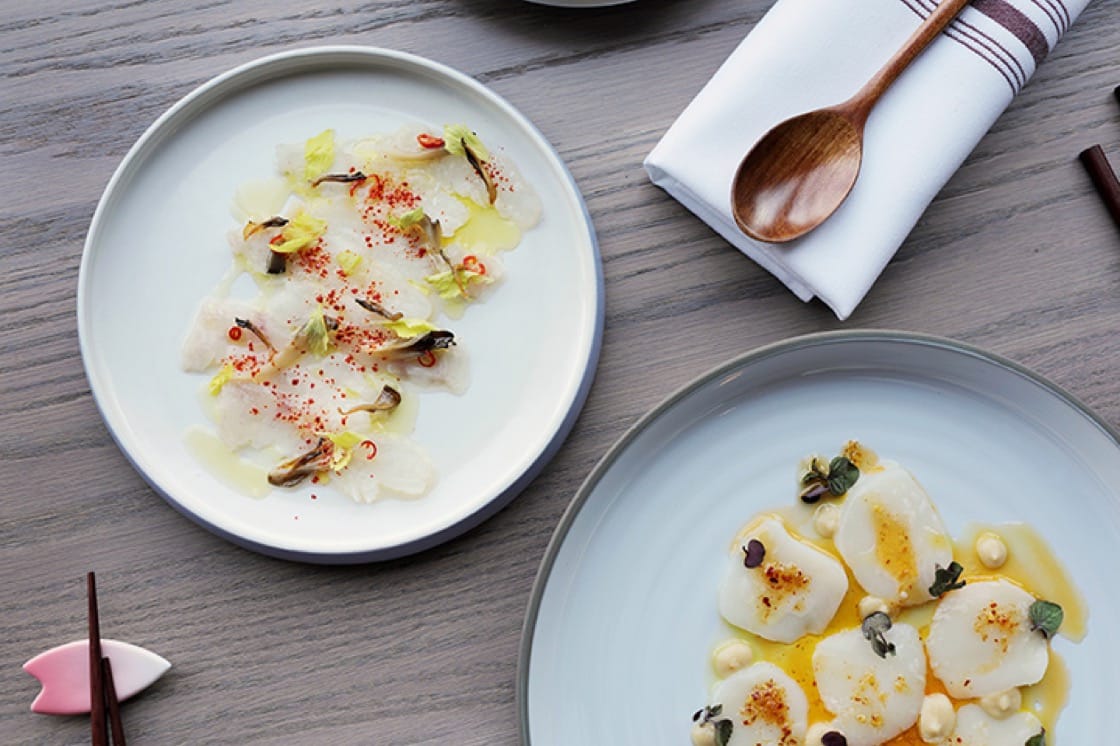 One of Kim's goals with the restaurant was to convince diners that wine can pair with Korean food. Guests sometimes arrive looking for the more standard beer or soju—"I don't even like soju. This isn't a karaoke bar."—but she doesn't feel the need to fit into American expectations of what a Korean restaurant should serve. "Having wine sets the expectation early on that this is not going to be a traditional Korean restaurant."

Looking ahead, her main priority is for Passerotto to be successful, but beyond that, Kim would love to explore opening up other spots with the people that she trusts and create opportunities. Kim credits Diana Dávila of Mi Tocaya for "really helping put a fire under my ass" in launching Passerotto. The two bonded over conversations about owning a business as a minority woman. "Sometimes no one will create opportunities for you so you have to go and create your own, but not everyone is fortunate enough to be able to do that."

"We have to start thinking about the next generation of cooks, and what are we doing to create opportunities for them?" On top of running a financially viable business, Kim is focused on making sure that she uses her success to help give more opportunities to people who may never be able to get them on their own.