There’s a plethora of food and drink to choose from at this new huge Manhattan complex.

After several years of construction, Hudson Yards—the largest and most expensive private real estate development in the history of the United States—has opened to entice both New York City’s elite and wide-eyed visitors alike. Spanning West 30th to 34th Streets and 10th to 12th Avenues, the mega complex was spearheaded by 78-year-old Stephen Ross, founder and chairman of New York-based Related Companies. Writer Carl Swanson describes Ross as the “Robert Moses for our age of concierge mega-urbanism,” in New York Magazine; a fitting description for someone making major waves in the city’s exponentially-growing landscape.

Construction officially began at the tail end of 2012 with groundbreaking at 10 Hudson Yards—you know that as the one with the terrifying open-air observation deck outfitted with the very scary glass floor; New Yorkers wouldn’t see a major change until September 2015 with the opening of the 7 train extension to its now final West Side stop of—tah dah, Hudson Yards.

Since then, the buildup has been quite the feat to watch—something I have personally witnessed from the West Side Highway running path. The first phase, unveiling today, is the end result of a mammoth 18-million-square-foot property carrying a price tag of $20 billion USD, all nestled on top of the Long Island Railroad rail yard.

Thanks to the hype, attracting local and out-of-state businesses was a non-issue. Warner Media is moving employees from their iconic Columbus Circle headquarters—where Ross currently works and resides—and taking up 1.5 million square feet at 30 Hudson Yards. And that’s just the tip of the glass iceberg: Dallas-based mega retailer Neiman Marcus is one of 100 retailers opening at The Shops at Hudson Yards, a first for them in the Big Apple. Lifestyle brand Equinox is opening their first hotel in June, “the complete manifestation of high-performance living[,] . . . a place where compromise simply doesn’t exist.” There’s some 4,000 residences and 14 acres of public open and park space. And there’s “The Vessel” by artist Thomas Heatherwick that resembles the likes of an unfinished honeycomb and has become the area’s unofficial mascot.

All of the glitz and grandeur also attracted many culinary powerhouses to the complex.

The #porrón was originally used in #Catalonia to share a drink (without sharing germs). #LittleSpanishTip: start with beer and leave the vino tinto to the expertos like our Cocktail Innovator, @miguel.f.lancha! It takes a bit of practice to get it right.

Chef and humanitarian José Andrés, along with Ferran and Albert Adrià, are stepping into the New York City dining scene with their eagerly-anticipated Mercado Little Spain, a 35,000-square-foot Spanish destination food hall featuring 15 dining options. Leña at Mercado Little Spain will be home to all things paella, grilled meats and live-fire cooking, while guests can nosh on impeccable seafood at the chef's counter in the aptly-named Mar. There’s a market to purchase Spanish ingredients and cookbooks. And there are xuixos—aka, deep-fried cream-stuffed croissants. (They may become the next Cronut® according to minibar executive chef Jorge Hernandez.)

David Chang is expanding into the neighborhood with Kāwi. Led by chef and Ko alum Eunjo "Jo" Park, the restaurant's name is taken from gawi, the Korean word for scissors; the cuisine will draw from both Park’s time in her native Korea as well as her past experiences at Ko. Snacks include soft tofu and caramelized soy and white pepper wings, while cured Long Island fluke with lemon dashi is featured on the raw menu. Rice cakes at Kāwi are made in-house daily and served two ways: spicy roasted, topped with chile jam, country ham and furikake, and wagyu ragu, featuring 28-day dry-aged beef.

Thomas Keller is also adding to his New York portfolio of restaurants with the opening of TAK Room. Per the restaurant’s website, TAK Room will serve “iconic dishes in an atmosphere that shines with style and glamour of a bygone era.” (Another outpost of Keller’s Bouchon Bakery has also opened in the retail space.)

Michael Lomonaco (of Porter House fame—also in the Time Warner Center) is offering up American fare at the new 275-seat Hudson Yards Grill—think a Pat LaFrieda beef-blend burger, a lobster roll and suckling pig. Sushi, a nod to his days at Windows on the World in the World Trade Center, will also be available. 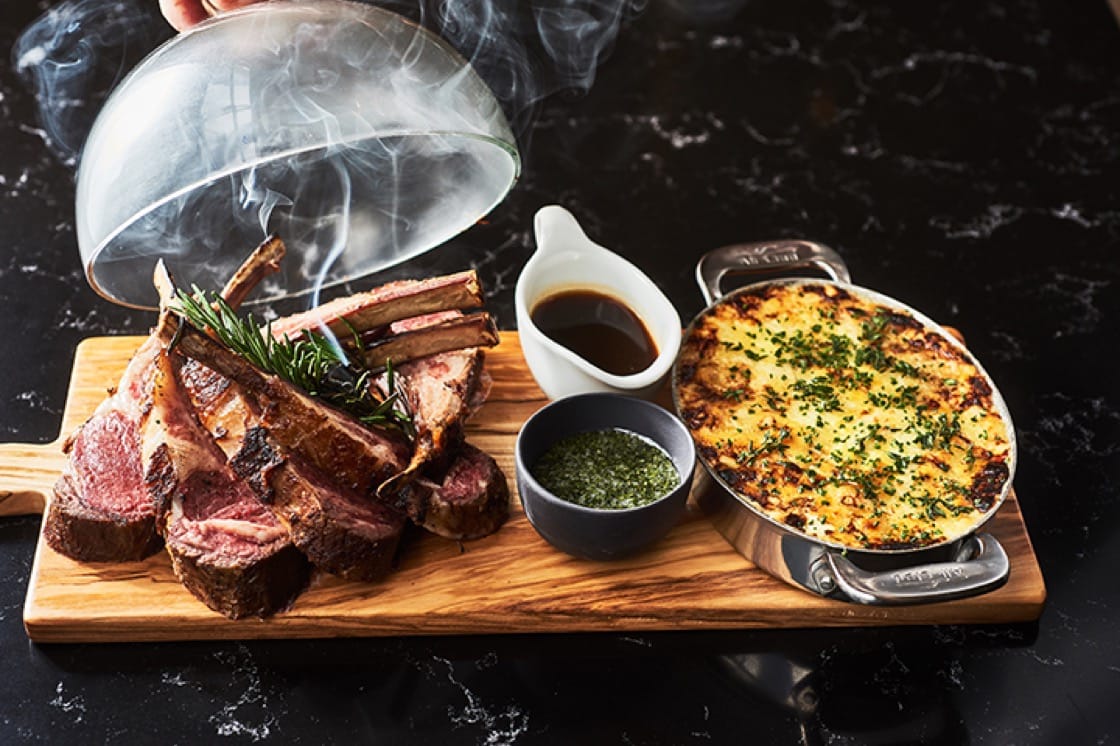 D&D London's Queensyard is located on the fourth floor of the mall. (Photo by Jennifer May.)

British restaurant group D&D London is expanding their New York footprint with Queensyard, hosting four different concepts similar to their recently-opened Bluebird restaurant (also in the Time Warner Center). Set on the fourth floor of the mall, the Cetra Ruddy-designed restaurant will feature a daytime café, kitchen with communal tables, cocktail bar with a heavy emphasis on gin-based drinks and a dining room with sweeping views of the Vessel. Dishes on the opening menu by executive chef Owen Sullivan include venison Scotch egg, peppercorn beef filet served over bone marrow and truffle toast and a housemade sausage-of-the-day to be carved tableside.

Greek mega-chain Estiatorio Milos, as well as fast casual eateries like David Chang’s Fuku, Shake Shack and Los Angeles-import and meat mecca Belcampo (welcome!) are also among the dining options here at Hudson Yards. (And there are three different food and beverage options up for grabs inside Neiman Marcus.)

The future for the property includes even more residential space as well as The Shed, a 200,000-square-foot exhibition space slated to open in early April, and an elementary school, proving this to be a small utopia in the middle of the concrete jungle. With so much to choose from, it’s no wonder that the media has kept an eye on this project—hopefully it lives up to the hype.