“I’m not trying to offend anybody. It’s supposed to be very tongue in cheek,” he says, of being a white man cooking traditional Japanese food in the Midwest at a restaurant named Gaijin, which translates to “foreigner” in Japanese. Though restaurants in Chicago have included okonomiyaki on their menus (Sunda, Ramen-San, among others), this will be the first restaurant in the area devoted to the dish.

Virant, who helmed MICHELIN-starred Vie in Western Springs, as well as Vistro in Hinsdale, Illinois, credits his wife for the inspiration to open a comfort food-style Japanese restaurant. She studied abroad in Japan during college and fell in love with okonomiyaki, a sort of savory pancake stuffed with various ingredients. When they started dating in 1995 while Virant was working as a professional cook, she asked if he had heard of it.

“Of course I hadn’t,” he says, “but I attempted to make it for her in the process of courting, and it’s just kind of become a part of our family.”

When his Chicago restaurant Perennial Virant closed in 2016, it seemed like the perfect time to spend some time in Japan.

Virant spent weeks traveling with his wife and kids, learning the differences between okonomiyaki in Osaka (cabbage, scallions, flour, dashi, egg, and other ingredients mixed together), Hiroshima (layered, rather than mixed, and with more cabbage), and Tokyo (where another version called monjayaki includes more liquid). 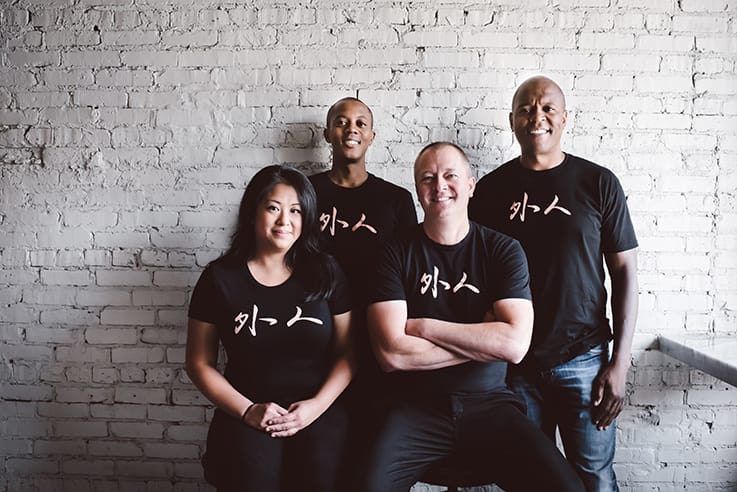 “It felt like an approachable composition that could work anywhere in the world,” Virant says. “Okonomiyaki means ‘have it your way,’ and in Japan they kind of refer to okonomiyaki as their pizza. Like here in the States where depending on where you are there are different kinds of styles. Okonomiyaki is pretty prolific all over the country.”

Guests at Gaijin will get traditional okonomiyaki batter with the option of a few American ingredients. Where in Japan okonomiyaki mostly uses seafood and pork as protein, Virant will offer chicken and beef as well. The menu will also include other small plates such as yakisoba, a stir-fried noodle dish; a few types of korokke, aka, Japanese croquettes; a miso-based soup with a minestrone influence; a short rib dish; grilled baby bok choy; a grilled steelhead dish with koji; and pickles made with local ingredients.

“Again, we’re taking that sort of Gaijin piece where something is very traditional, but then we’re going to make it our own with all the wonderful produce and stuff found in the Great Lakes area,” Virant says.

He also imported a shaved ice machine from Osaka that pastry chef Angelyne Canicosa will use to make kakigori, a super finely shaved ice dessert with sweetened syrup and sometimes condensed milk.

The drinks menu will include a small list of sakes, wines by the glass, and Japanese-inspired cocktails. Chicago-based Moody Tongue Brewing Company even created a Japanese-style lager Gaijin will offer on tap.

Traditional okonomiyaki restaurants give customers the opportunity to watch the cooks in action, and Gaijin will be no different. Virant imported a custom-made 12-foot teppan okonomiyaki griddle that guests can sit around at a 14-seat bar, and there will be smaller griddle units built into the tables.  “You’ll be able to watch it all unfold.”

Studio Inc. designed the interiors, which utilizes the Japanese concept of efficiency in space and storage.

“Deciding on incorporating the table warmers drove a large part of the layout,” says Bob Quellos of Studio Inc. “The trick was to still allow for flexibility for different groupings of customers. So there's a lot of coordination and anticipation of possible scenarios that needed to occur to ensure this tight restaurant environment functions successfully.”

“This is a dish families make at home,” Virant says, “so we have the communal dining type of thing happening. It’s not a high-end place.”

While Virant has been successful in both Chicago and the suburbs, he doesn’t think Gaijin could work anywhere but the West Loop. “It’s such a dynamic food and beverage scene, and being in the West Loop area made sense to introduce something relatively unfamiliar to a lot of people. To have the first okonomiyaki restaurant in the Chicagoland area, we really wanted to be in a place like that.”

Gaijin will open at the end of October at 950 W. Lake St. Prices will range from about $15 per person for lunch to about $30 for dinner. Carry-out and delivery will also be available.