The Best Mediterranean Restaurants in D.C.

Our inspectors recognized these restaurants as the best of the best.

Since its earliest days, Washington, D.C. has played host to swaths of European diplomats who bring their proud cultures and cuisines along with them. Designed by the French-American engineer Pierre Charles L’Enfant, even the city of D.C. itself inspires an Old World mindset, with wide tree-lined streets and plentiful parks and monuments.

It’s no wonder some of the best chefs of Mediterranean cuisine have chosen Washington, D.C. as their city of choice. Here are six Mediterranean restaurants recognized by our inspectors as exceptional.

What Our Inspectors Say: "Tucked into DC’s hip Shaw neighborhood, this charmer is low-lit and cozy by evening, with Sunday brunch offering a brighter ambience, care of jumbo windows and a lovely patio. Chef Robert Curtis is now at the helm, and the kitchen has veered in a new direction. The dishes reflect a global mash-up of ingredients, though with urfa peppers and zhug dotting the menu, it clearly leans eastern Mediterranean. Begin on the light side with a trio of spreads—zhug, tahini and carrot hoydari; then savor the richness of honey-drizzled foie gras. Fluffy gnocchi with a poblano-pork ragout is perfection, not unlike the Rohan duck, which shows off a definitive Mediterranean spirit thanks to lentils, spiced carrots, as well as harissa-spiced duck legs and meaty roulade."

What Our Inspectors Say: "If you took a few row homes, opened them into one large space, and then styled them with a modern maritime sensibility (draped netting with large glass jugs), you'd have Olivia. From its white painted brick to its Edison bulb light fixtures, Olivia has a relaxed and modern elegance. Feel like throwing a party? The cute private rooms with floral themes are just the place. Like the European-focused wine list, dotted with Sicilian, Greek and French bottles, the menu skips around the continent. Chickpea ravioli, with a melange of mushrooms for a twist on bolognese, displays creativity, while the Galician-style octopus carpaccio is another keeper. Wrapped in Serrano ham and thinly sliced to resemble charcuterie, it's both tender and flavorful." 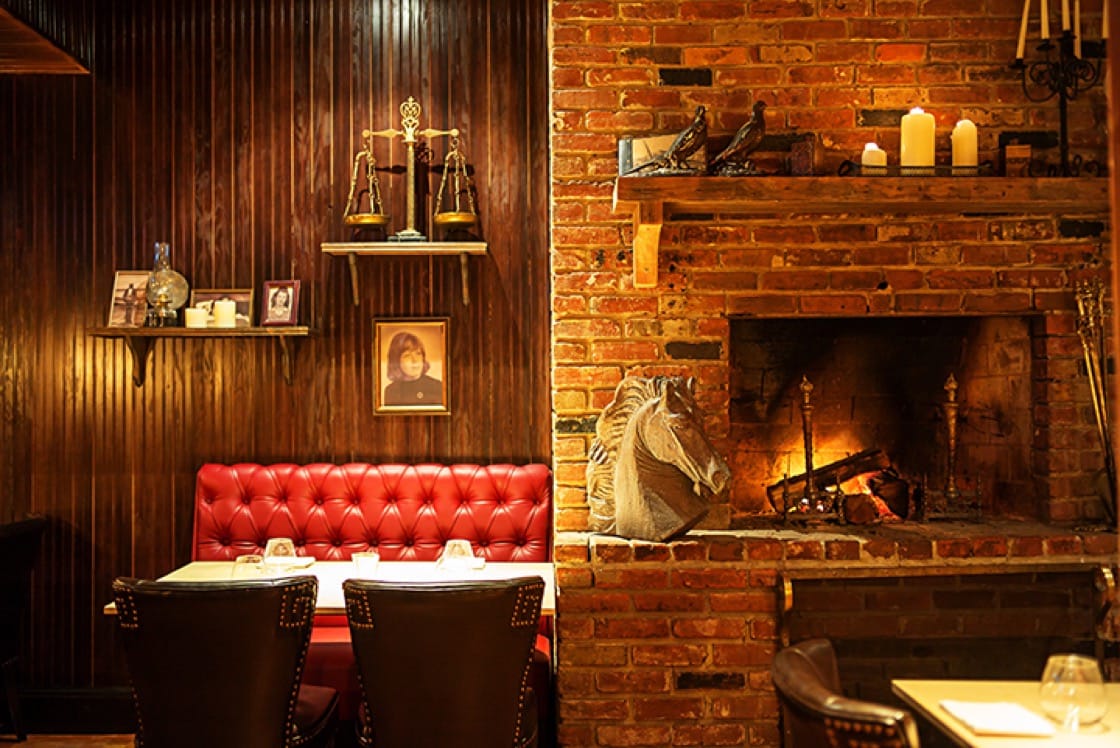 The interior of Iron Gate. (Photo by Scott Suchman.)

What Our Inspectors Say: “Blessed with one of the coolest dining spaces in the city (a former stable and carriageway tucked inside a historic townhouse), Iron Gate has a good thing going even before you take your first bite. Its cozy dining room features rustic dark wood beams, sleek leather banquettes and a roaring fireplace; while out back, a lovely—and lively—trellised garden patio stays heated and open nearly year-round. The good news is the food is just as exceptional—dinner features an à la carte menu with dishes that meander between Greek, Italian and Mediterranean flavors. Sesame-crusted feta finds perfect harmony in sweet and tart vin cotto and honey; while caramelized ricotta gnocchi gets a leg up from pork sausage ragù, chile pepper and a dusting of Parmesan.”

What Our Inspectors Say: “Climb the stairs of a historic Dupont Circle townhouse to find this diminutive restaurant with a focus on drama. The smattering of well-spaced tables and a hushed ambience fashion a very promising date night. Photos are verboten, which is no matter since you’re so busy having a good time in “real” time. The staff is relaxed, engaged and professional. That said, they provide precious little information on how each evening’s single prix fixe will unfold—there are no menus, and diners have a minimal glimpse of what is to come next. But relinquishing control to these capable chefs (and sommelier) is the only way to go, as the results are bound to leave you feeling uplifted. Meals begin with small bites that treat the palate to raw, cool and cooked flavors. These have included soft brioche topped with trout roe, sliced sea scallop crudo over a lobster reduction and sweet-savory warm Medjool dates filled with mascarpone and finished with a sprinkle of sea salt. From there, delve into a duo of wonderfully rustic house-made pastas, like ravioli filled with celery root and dressed with morels, favas and bits of lamb's tongue. Roasted kid goat with fluffy pita conjures the best of Greece.” 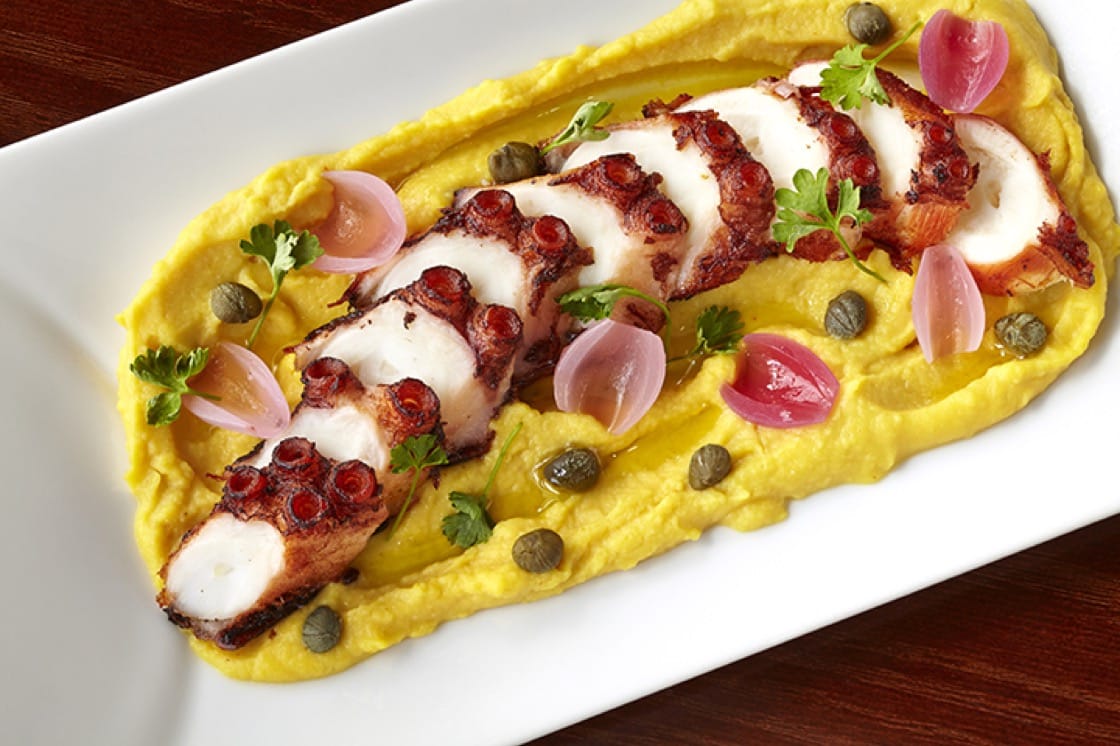 What Our Inspectors Say: “Powerhouse chef José Andrés' ocean-blue ode to the foods of Greece, Lebanon and Turkey means the mezze menu ranges far and wide, from flatbreads to kebabs to dips. Greek and Lebanese wines are given their fair due on the exceptional wine list. Zaytinya speaks to the ease and elegance of the Mediterranean—zero in on the grape leaves, garides me anitho and the Turkish braised lamb that tastes like the Sunday roast everyone deserves. The dishes show refinement and skill while still coming off as immensely personal. Despite the size, the large dining room is sectioned into cozy nooks; solo diners should head to the long bar. The warm service makes it feel especially inviting, likely accounting for the perpetual crowd (so make reservations).”

What Our Inspectors Say: "'Sababa,' which means 'cool' in Hebrew slang, is exactly as advertised. Sharing a wall and connected by a gorgeous zinc bar to Bindaas next door, this Mid-East ode is awash in Mediterranean tiles. But despite the hip digs, it’s all about food here. The fine-tuned menu features Israeli salads, dips and kebabs, but small plates are its heart and soul. Start with salatim, a five-salad starter. Then choose from dishes such as charred eggplant with herbed labneh, fried cauliflower with tahini and raisins or pomegranate-glazed chicken liver. The list goes on, but one thing to never skip is the hummus. It's so much more than the usual, that it's even listed as a daily special. Keeping in line with the sauce is their Israeli- and Greek-focused wine list."

Try this recipe from one of Chicago’s best Mediterranean restaurants.

The Best Mediterranean Restaurants in Chicago

According to our out inspectors, these three restaurants are the best for Mediterranean cuisine.

A popular dish from one of D.C.’s most historic restaurants, here’s how to make it at home.