Taiwan, the land of a thousand delicious small eats. On its streets, you would be hard pressed to choose from taro balls, gigantic chicken cutlets, pepper buns, bubble tea and of course, gua bao. Besides bubble tea, these fluffy meat-filled parcels are probably the most famous street snacks known outside of Taiwan. The locals all have their own favourites, several of which are listed in the MICHELIN Guide 2020 Taipei-Taichung, including Bib Gourmand establishments like Yuan Fang Gua Bao, Lan Chia Gua Bao, Yi Jia Zi, Shih Chia Big Rice Ball, Peng Cheng Tang and the MICHELIN Plate Shin Yeh Taiwanese Cuisine.

Sandwiches in all their forms are an ubiquitous food across all cultures: burgers in America, the Middle Eastern shwarma, Vietnamese banh mi. In Mainland China, you will find Fuzhou guang bing, Beijing braised pork meat pie, and Shanxi rou jia mo. Like its Chinese brethren, gua bao is a traditional Hokkien food said to have originated from Fuzhou or Quanzhou.

In Quanzhou, gua bao is known as rou jia bao (meat between buns) or hu yao shi (tiger bites lion). The custom of Huian people in Quanzhou is to eat these pork belly buns to celebrate the marrying off of a daughter. Gua bao is the Taiwanese equivalent, where it is also sometimes known as hu yao zhu (tiger bites pig). In the past, northerners in Taiwan would eat gua bao to celebrate the end of the lunar year (on the 16th day of December in the lunar calendar) because its shape was similar to gold ingots which symbolised wealth and luck for the new year. These days though, the delicious buns have become an everyday street snack. (Left: Gua bao from Peng Cheng Tang)

The globalization of gua bao has led to its evolution—sandwiched between the lotus-shaped buns now are every variation of filling, with all sorts of new combinations of ingredients. David Chang’s famous Momofuku buns are made with unctuous roasted pork juxtaposed with thinly sliced cucumber. Baohaus' version reflects its American roots with a melting pot of influences including Huang's grandmother's Hunan pork filling and a garnish of Taiwanese cilantro and peanut powder. Customers get a choice of fillings such as fried pork, chicken and radish with BAO’s buns and these are served with Taiwanese style hand-shaken drinks. 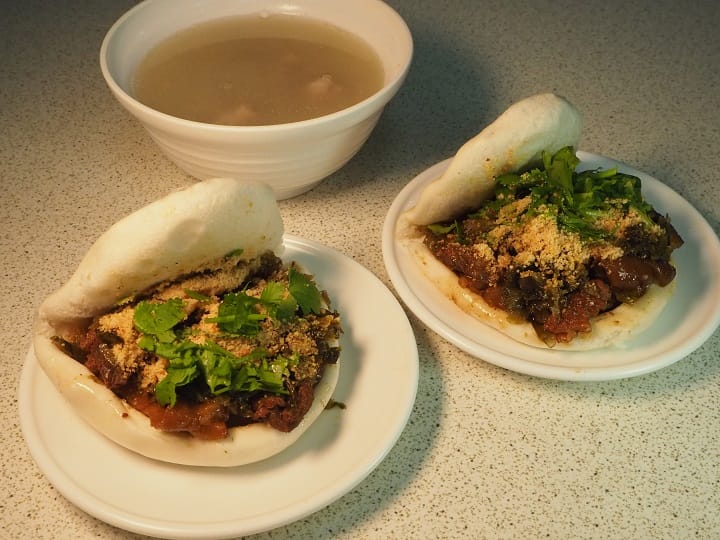 In Taiwan, you will find both traditional and modern versions of gua bao. While gua bao is traditionally filled with pork, cilantro, pickled vegetables and peanut powder and eaten with a lotus seed and Chinese yam soup, contemporary versions might feature Thai-style fried chicken thighs, Wagyu beef with mushroom sauce or Italian pesto chicken, and these might be served with craft beers or soda and sold at trendy cafes at much higher price point.

In the MICHELIN Guide Taipei-Taichung, you’ll find a number of recommended establishments for traditional gua bao. The newest restaurant in the list, Yi Jia Zi, features a mouth-watering, generous slab of pork belly meat. Lan Chia Guabao offers a variety of pork meat-to-fat ratio options for their customers who might prefer fattier or leaner cuts. 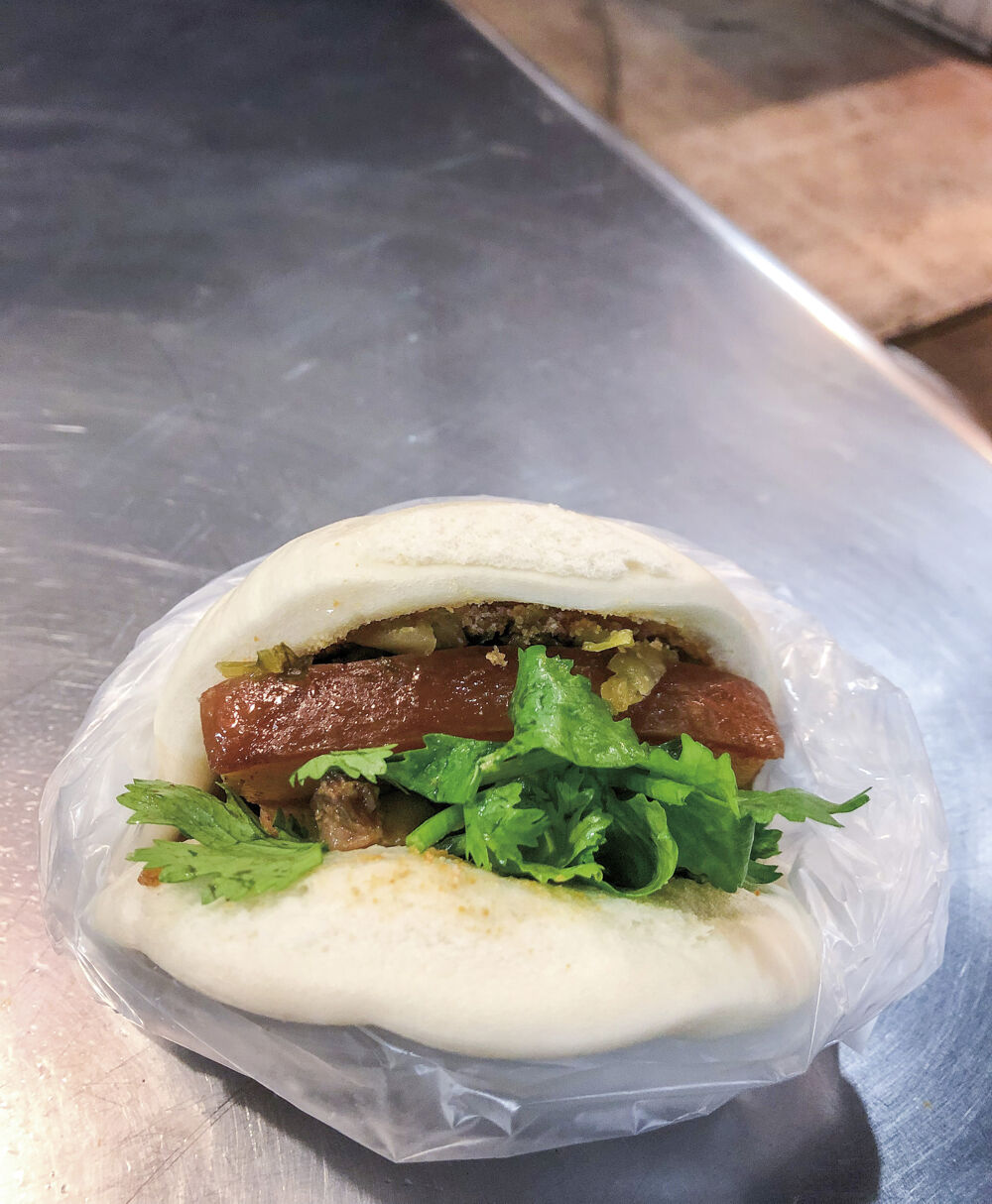 Founded in 1955, Yuan Fang Guabao (left) emphasizes the importance of pickled vegetables. The pickles are not stir-fried, but chopped and stewed, making them less oily and less tart, with a much cleaner taste. In addition, the ingredients are also unique, starting with a generous amount of peanut sugar powder, followed by pickled vegetables, pork and cilantro, and finished with another sprinkle of peanut sugar powder. The final sprinkling of peanut powder serves another purpose: to prevent any excess marinade from seeping into the bun and turning it mushy. 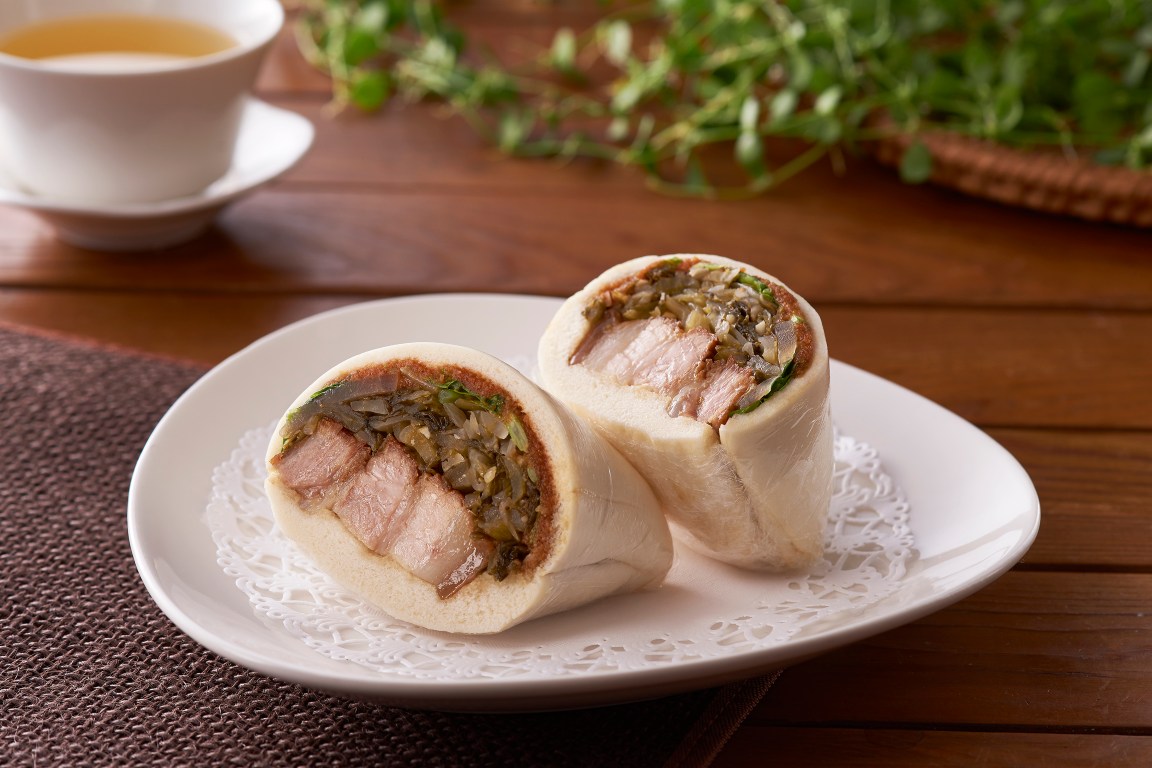 The gua bao at Shin Yeh Taiwanese Cuisine features the addition of sweet chili bean sauce, a common Taiwanese condiment which encompasses sour, sweet, spicy and salty flavours with a hint of bitterness. Peng Cheng Tang in Taichung offers a DIY version: all ingredients such as braised pork, homemade braised bamboo shoots, pickled vegetables, peanut powder and gua bao buns are all served separately on the table to allow customers to mix and match to their hearts content. Interactive and fun, the dish has become one of the most popular dishes in the restaurant.