Discover the Flavours of Lanna through Nam Phrik, Khao Soi and Khao Nueng.

There is no doubt that Chiang Mai is one of, if not the most, famous northern province of Thailand. One of Thailand's key cities, Chiang Mai has seen exponential growth over the past decade and now boasts a modern café hopping scene, making it a destination for many young urbanites and travellers to check-in at. Aside from galleries and cafés, Chiang Mai also maintains a unique charm of the olden days and the air of Lanna culture - a trait most apparent in its rich culinary offerings that are well-loved by local Thais and foreigners alike. The famous Chiang Mai dishes, or kap khao mueang, include Thai staples; such as, different types of kaeng (soup), khao soi (curry noodles), sai ua (sausage), lap nuea or lap khua, and an array of nam phrik (chilli dip) that are eaten with khao nueng (sticky rice) and vegetables.

Khao Soi
When it comes to a signature Lanna dish, one of the first that springs to mind is khao soi. While there is some confusion whether khao soi is a rice dish since khao means “rice”, khao soi is actually a type of curried noodles, and the rice, in this case, refers to the rice noodles that have been sliced to a medium broadness. This famous dish is believed to have originated from the Chinese-Muslin, or Chin Haw, merchants of the 19th century. Due to its Islamic roots, khao soi is usually enjoyed with chicken, or khao soi kai, and beef, khao soi nuea. The key to a delicious khao soi lies in the curry soup in which the ingredients consist of roasted coriander root, sliced ginger, shallots, dried chilli, and sliced turmeric. The key ingredient, however, is the roasted ground black cardamom seed that gives khao soi its unique aroma. When serving, khao soi is topped with crispy fried noodles, a slice of lime, pickled cabbage and chilli oil. 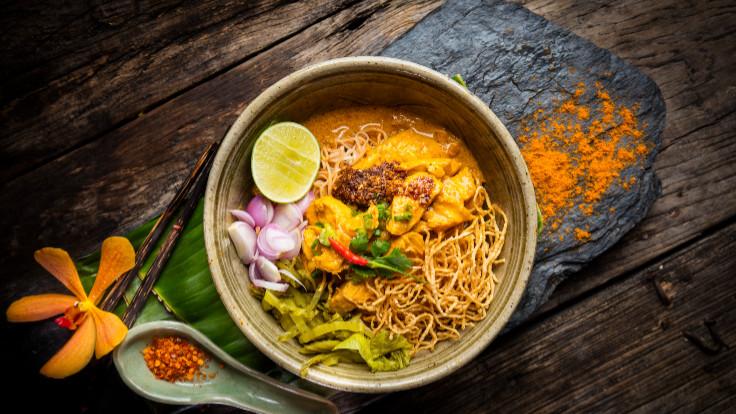 Nam Phrik
Nam phrik or chilli dip is one of the most local and basic elements of authentic Thai food. The charms of nam phrik come from the different variations in type, flavour and ingredients. From the fiery and drier nam phrik from the Southern region and the milder, more rounded flavours from the Central Region, one can distinguish between the different types of nam phrik based on its origin. The two most well-known nam phrik from the Northern Lanna region is none other than nam phrik ong and nam phrik num, which are enjoyed with fresh vegetables and crispy pork rind.

While the taste of most nam phrik may be too fiery for the untrained palate, nam phrik ong is a great introduction to the world of chilli dips to those who prefer a milder taste. The key to nam phrik ong lies in its star ingredient of tomatoes stir-fried with minced pork and dried chilli, which give the dish a distinct blend of sweet and sour flavours that can be enjoyed by children and adults alike. For those who prefer something spicier, a serving of nam phrik num with your Lanna meal is highly recommended. The name of the dish, nam phrik num, is directly taken from its key ingredient of phrik num or green cayenne chilli. Although called phrik chi fa by most Thais, phrik num is a Northern dialect for cayenne chilli, in particular, green cayenne chilli. Popularly enjoyed with fresh and steamed vegetables, crispy pork rind and sticky rice, nam phrik num has a unique smoky aroma from roasting the chilli, shallots and garlic. Together, the ingredients are ground and flavoured with fish sauce and sugar. 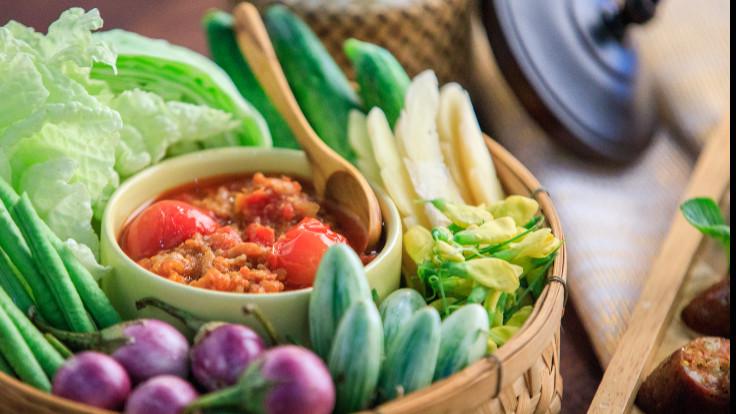 Khao Nueng
A Thai meal would not be complete without rice. In this case, it would not be complete without khao nueng, or steamed sticky rice. Aside from noodle dishes where the noodles serve as the main source of carbohydrate, Thai cuisine is always enjoyed with rice. Khao niao or sticky rice is called khao nueng in the North. Just as jasmine rice is eaten with a typical Thai meal, khao nueng is a crucial part of a Northern meal as it serves as the main source of carbohydrate. Believed to be more filling than jasmine rice, khao nueng goes particularly well with spicy chilli dips and lap/lap nuea dishes. To enjoy an authentic Thai experience, do as the locals do and opt for sticky rice when it comes to Northern and Northeastern cuisine. 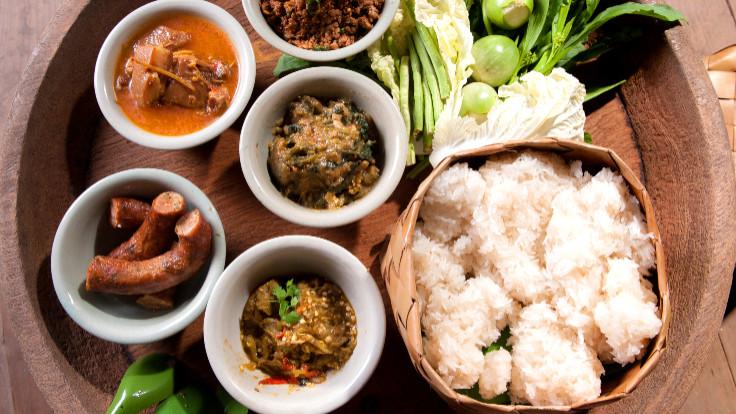 Chiang Mai is a distinctive city that combines the old with the new. It is a place where Lanna culture meets a stream of change and modernity and despite its growth into an urban hub, it still maintains a quaint charm where one is still able to feel traces of age-old traditions. Another star attraction of Chiang Mai is none other than its culinary scene. For those unfamiliar with Northern food, start with these local staples - a first step that will open the door to an array of more wonderful dishes that Chiang Mai has to offer.