From the popular som tum Thai papaya salad to the more adventurous dishes made with tadpoles, ant larvae and fresh blood, northeastern Thailand is definitely the place to be for dishes to jazz up your palates.

Known for its vibrant culture, northeastern Thailand or Isaan is also the region to savour some unique Thai dishes. Because it’s very hot and humid in the area, the cuisine relies heavily on the method of preservation and fermentation and the food is also characterised by local herbs, vegetables and spices.

Here are 10 dishes you can’t miss for a true taste of Isaan.

Also known as Thai papaya salad, there are many versions of this iconic dish, but the heart of this dish lies in the fresh, crisp green papaya slices that are mixed with the likes of local tomatoes, chilli, garlic and fish sauce. "The Isaan variation of som tum stands out with the use of tangy hog plum (makok) and crunchy white popinac seed (med kratin),"  says Chef Kornthanut Thongnum, Executive Chef and Founder of Somtum Der (MICHELIN Plate).

While som tum pla ra is an acquired taste, som tum Thai is much more accessible and has become more popular, especially in central Thailand. In contrast to the salty, spicy and pungent som tum pla ra, som tum Thai has a more sweet and sour taste, with the use of palm sugar and lime, balanced with the saltiness from the fish sauce and dried shrimps. Instead of the green seeds from white popinac, you’ll get to enjoy the crunch from roasted peanuts. Other variations of som tum include tum sua (mixed with rice noodles), tum kao pode (with corn instead of green papaya), tum tang (with cucumber instead of green papaya), tum ponlamai (with fruits), and many more. Som tum is usually enjoyed with steamed sticky rice or rice noodles on the side. 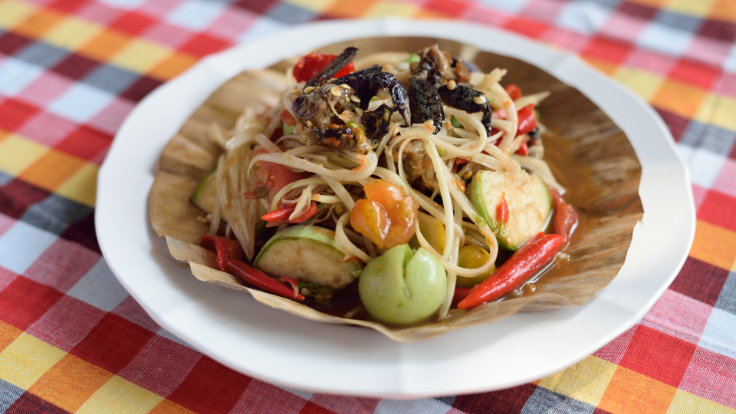 Another typical Isaan dish, larb is made with minced meat, cooked or uncooked, mixed with ground toasted rice, shallots, spring onions, mint leaves and seasoned with chilli, lime juice and either fish sauce or pla ra. The preferred meat used in the dish usually includes pork, duck, beef or chicken. In some areas, you can also find larb luead, where fresh blood is mixed in and other variation of meats depending on local finds. Like most Isaan dishes, larb is usually eaten with steamed sticky rice. Some places also offer a contemporary version of larb tord with similar ingredients as larb but shaped into meatballs and deep-fried. 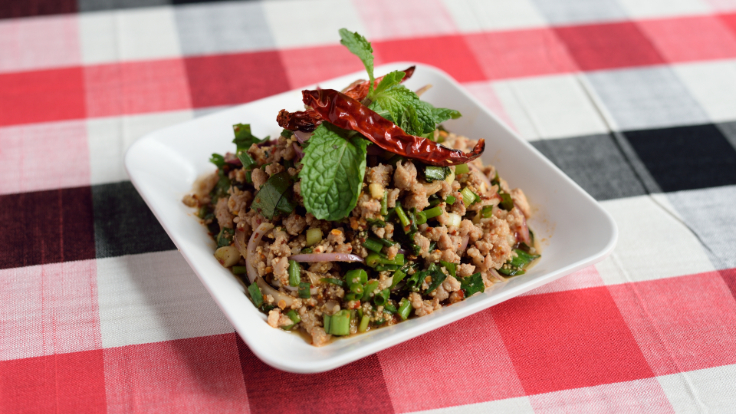 Koi is the Isaan region’s answer to tartare, and is basically raw meat salad, minced or cut into small pieces. It is typically made with red meat such as beef, water buffalo, venison, fish, shrimp and ant larvae, with similar ingredients as larb. Enjoy this dish with warm steamed sticky rice to complete the Isaan experience. 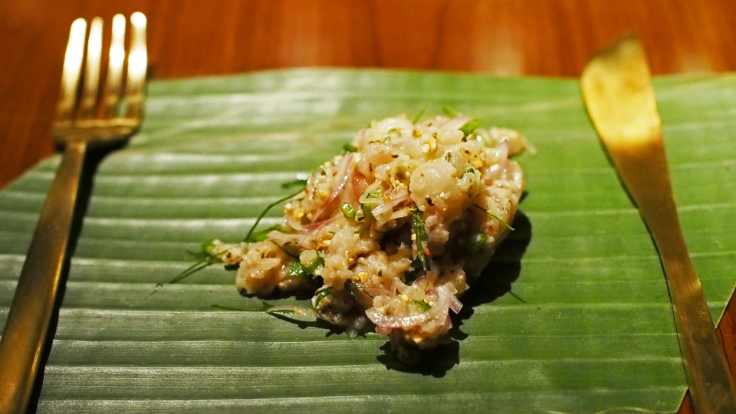 Om is an Isaan curry made with freshly-pounded paste and without coconut cream. Seasonal vegetables lie at the heart of this soupy dish, with several options of meat like chicken, frog, pork, catfish and pond snail. The base chilli paste is made with shallots, lemongrass and chilli, but the distinct aroma and flavours come from local herbs like culantro and lemon basil. In some recipes, the selection of herbs and vegetables may differ for each meat used in the dish. 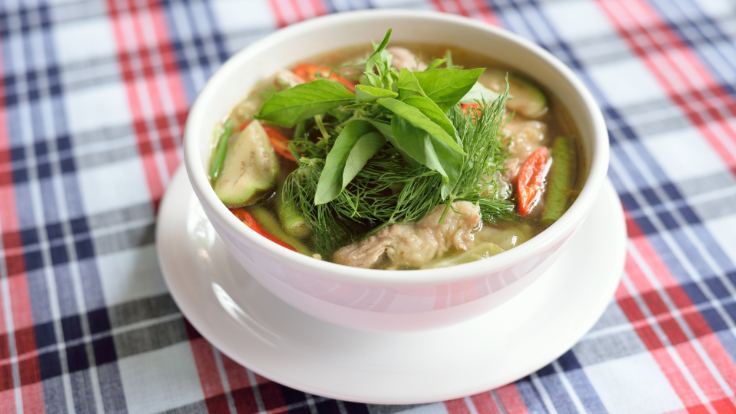 Called gaeng nor mai bai yanang (Tiliacora triandra) in Isaan, this dish is a distinctive northeastern dish. Like om, it doesn’t contain coconut cream and is simply made from freshly-pounded paste. Fresh bamboo shoots—the main component of the dish—need to be boiled beforehand to reduce its bitterness, while the dark green broth comes from yanang leaves. Besides chilli, the soup is seasoned with pla ra fermented fish and thickened with khao buer or pounded soaked and sticky rice. Additional flavours come from seasonal vegetables in the dish. 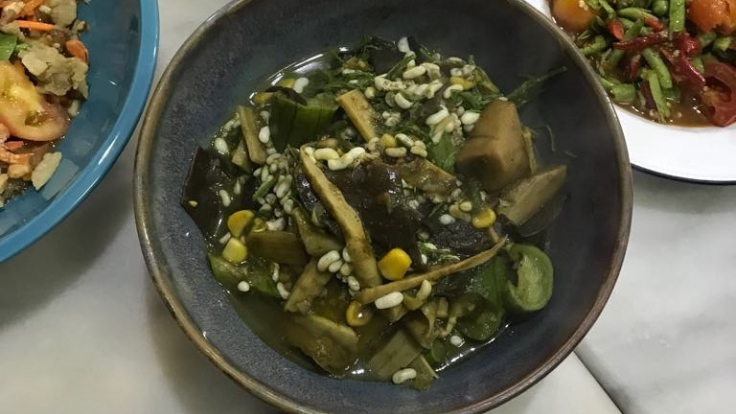 In Isaan, khao gee (pronounced kao jee) refers to a morsel of cooked sticky rice that is then shaped into elliptical balls or thin circles and then double grilled with a coating of salt and egg. Traditionally, the Isaan locals make khao gee during the winter as a way to keep the body warm. 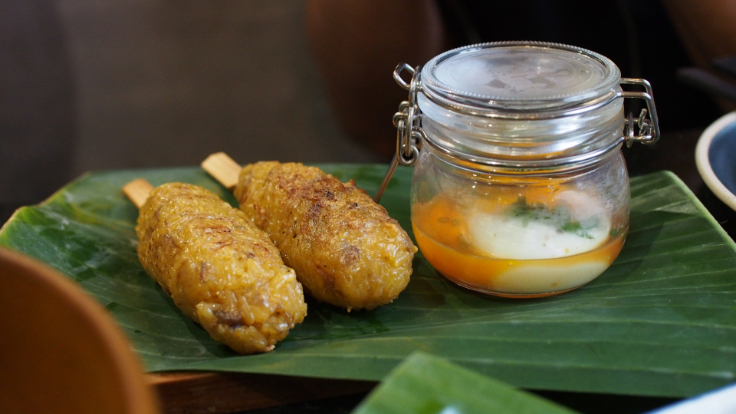 Isaan people make their sausages with a short fermentation period that’s enough to give them a slight tang. Locally known as sai krog Isaan, the sausage is made from pork meat and pork fat. Cooked rice is added to the mixture to kickstart the fermentation process which normally only lasts two to three days. Isaan sausages are already seasoned with garlic and salt, making it a handy snack to be enjoyed with fresh chilli, ginger and cabbages. 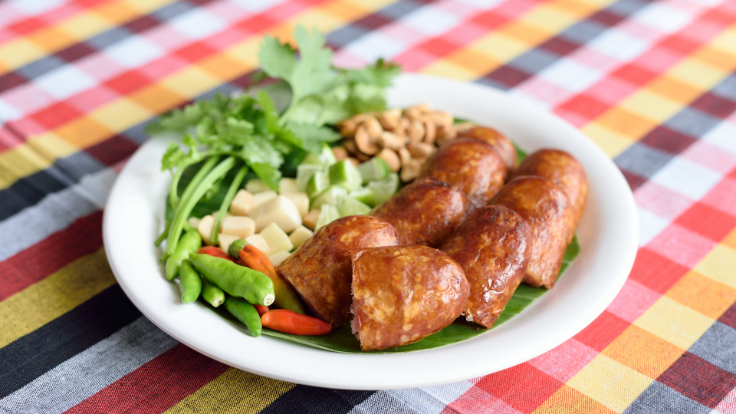 Pla means fish and som means sour in the Isaan dialect so you can be sure that pla som involves fish with a hint of sourness from the fermentation process that is part of its preparation. Pla som can be either whole fish, fillets or slices that are seasoned with salt and garlic, wrapped with seasoned cooked rice and left for a few days. Freshwater fish like java barb (pla tapien) is the most commonly used fish for pla som, and when ready, it is usually deep-fried or grilled. 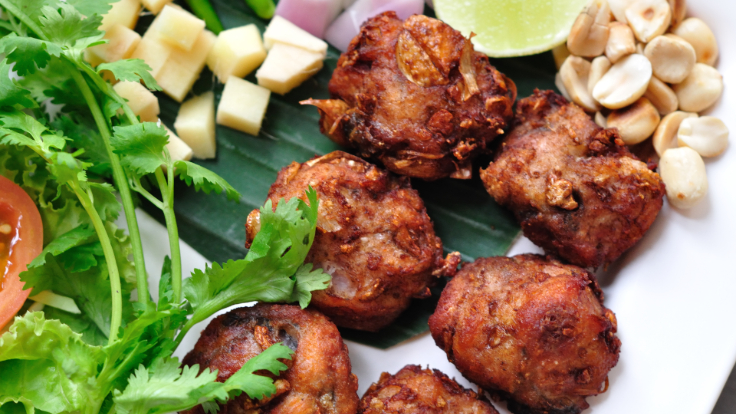 Mok refers to a cooking method that involves mixing meat or vegetables with curry paste, wrapping it in banana leaf and steaming or grilling it. While similar to central Thailand’s hor mok, the Isaan version does not contain coconut cream and has lemon basil as the star herb. The main component in mok can vary from several kinds of fish to tadpoles, ant larvae and fish roe, to vegetables like bamboo shoots, banana blossoms and mushrooms. 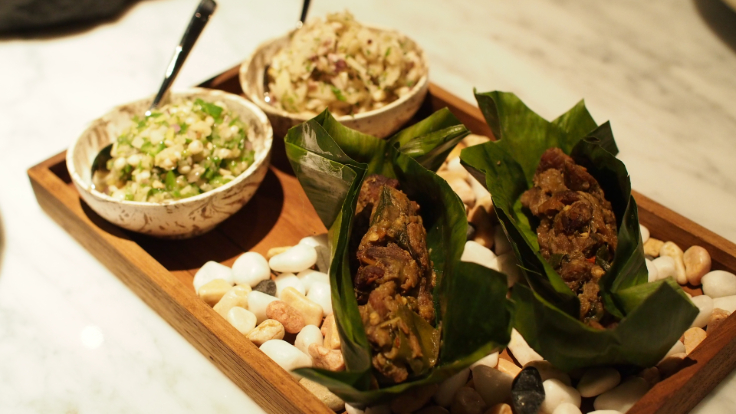 If you’re familiar with Thai relish “nam-prik” culture, jaew is its Isaan counterpart. Jaew is made as a dip to be eaten with the likes of steamed vegetables, fish and sticky rice. Lying at the heart of jaew is pla ra and chilli, garlic, shallots and a tangy ingredient like lime or local tomato. 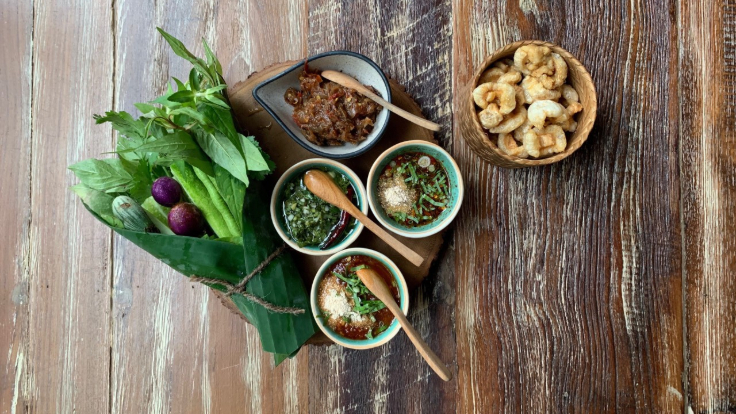 Here are the 5 best restaurants of Bangkok specialized in Isaan cuisine (or influenced by northeastern Thailand) and what our inspectors said about them.

Lay Lao (Bib Gourmand)
This Ari restaurant specialises in som tom salads that harmoniously blend the freshest seafood from Hua Hin with a pungent, North Eastern style kick. Featured dishes include fried squid, mussels with green papaya, deep-fried shrimp with garlic, and spicy som tom with raw mantis salad. Many dishes are the owner's own creations; she hails from Hua Hin and sources prime cuts of beef from a special farm.

Somtum Khun Kan (MICHELIN Plate)
Starting from a small shop in Mueang Thong Thani, and then winning a Som Tum (spicy papaya salad) competition in 1999, Khun Kan has earned his reputation through high quality dishes and great flavours. As well as its famous Som Tum, the menu offers a wide variety of authentic Thai and Thai-Isan cuisine. We recommend the grilled pork shoulder with honey and herbs, roasted chicken with crispy skin and the deep-fried minced shrimp with mango salad.

Somtum Der (MICHELIN Plate)
While other regional Thai cuisines are represented, Isan dishes from north-eastern Thailand dominate the menu at this cosy eatery in the busy Si Lom neighbourhood. The homemade grilled sausage and spicy herbal soup are standouts, but the big draw is Som Tum, the famous Thai papaya salad, served ten different ways. The team of Thai owners has other branches in New York City, Ho Chi Minh City, Tokyo and the most recent opening in Thong Lo, Bangkok.

100 Mahaseth (Bib Gourmand)
Specialising in 'nose to tail' dishes inspired by Indochina flavours, the ingredients here are sourced directly from the farm. Our favourites include the creamy and complex bone marrow with flavoursome Thai-style sauce, as well as the robustly spiced northern hotdog, which has a real kick. Interiors are rustic and industrial with a hint of Thai countryside, while the dry-ageing meat cabinet adds a sleek, modern element. 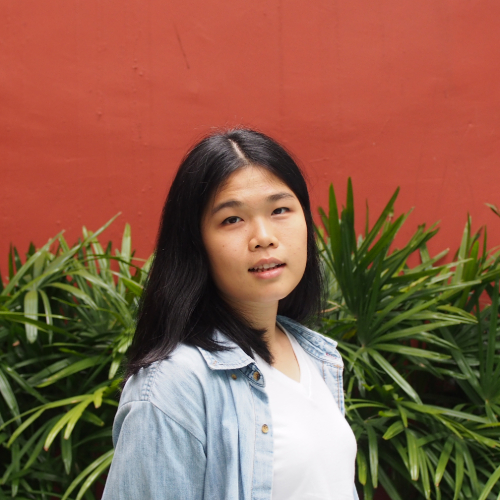 A psychology graduate, Natcha started her career in food writing right after university. Since then, she’s always been hungry to learn more about what she eats and thirsty for new flavors. As much as she enjoys exploring the world through food and drinks, you’ll often find her with a sweet tooth and appetite for craft chocolate.

Discover the capital deliciousness waiting to be found in Ayutthaya.