The inaugural MICHELIN Guide Taipei recently announced its first ever list of Bib Gourmand Restaurants in the city on March 6. Out of the 36 establishments in the list, eight joints specialise in beef noodles, a piece of the city’s living history that keeps evolving.

The of Origins of Taiwanese Beef Noodles

Many gastro-tourists fly all the way to the metropolis of Taipei with one goal in mind—to have a taste of the authentic beef noodles. There’re no lack of stories on how Taiwan’s most celebrated dish came about.

According to one of the theories, its prototype was canned beef from the wartime rations provided by the American army. The locals added the humble beef product to the noodles that they ate regularly. The practice caught on and was refined over the years.

Another hypothesis claims that beef noodles has roots from the Szechuan-style beef noodles that is widely sold in Gangshan, Kaohsiung, where the military dependents’ village was located.

In the provisional housing for those who fled from Mainland China after the civil war, the wives of air force personnel hailing from Szechuan created a spicy bean paste (or doubanjiang) which is the foundation of the broth of the Szechuan-style beef noodles. The condiments also originate from Sichuan, China.

Due to geographical difference, the Taiwanese version uses soy bean instead of fava bean that is used in the original recipe. And unlike Szechuan doubanjiang which is used as a marinade for roast beef, adding spicy bean paste to noodles is unique to Taiwan. 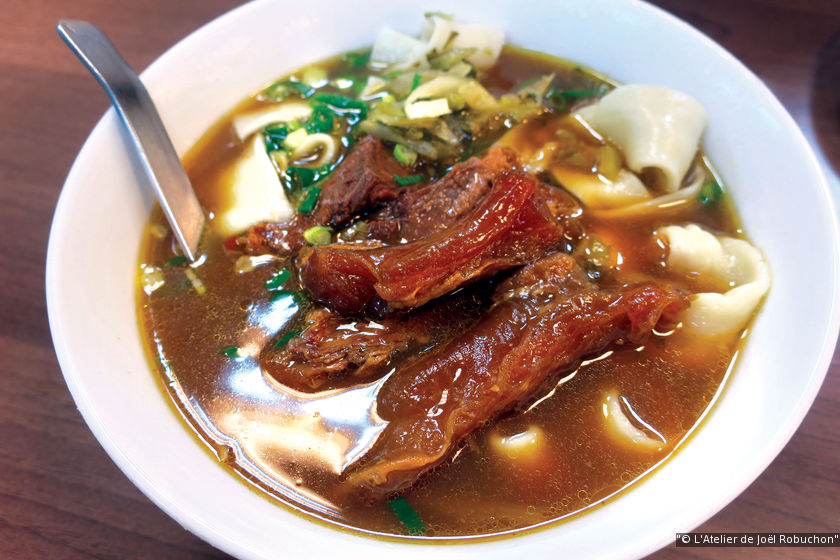 The Evolution of Beef Noodles

The older generation, who witnessed the first incarnation of Taipei beef noodles, would remember that the dish started out featuring beef innards. It was an era of thriftiness: retired army personnel from Shandong would take the unwanted offal from a butchered cow, make a stew out of it and serve it with noodles at their small stalls around train stations and parks.

More premium cuts of beef cuts weren’t used until the local economy took off. In Taiwan, the sweet and savoury beef tomato stew over noodles not only feed hungry mouths, it is an effective remedy for many homesick immigrating families.

Beef noodles were officially canonised into Taiwan’s gastronomic treasures in 2005, when the Taipei Beef Noodles Festival took place. The huge network of beef noodles shops in Taiwan suddenly became the spotlight of the city, and they didn’t waste any time to push the trend forward, bringing in more sophisticated ingredients and advanced cooking techniques to attract diners.

If beef shank is too “lowly” for your taste, there is beef rib, steak or even wagyu. These new inventions attracted new customers, but the fan base of the age-old establishment is strong as ever. 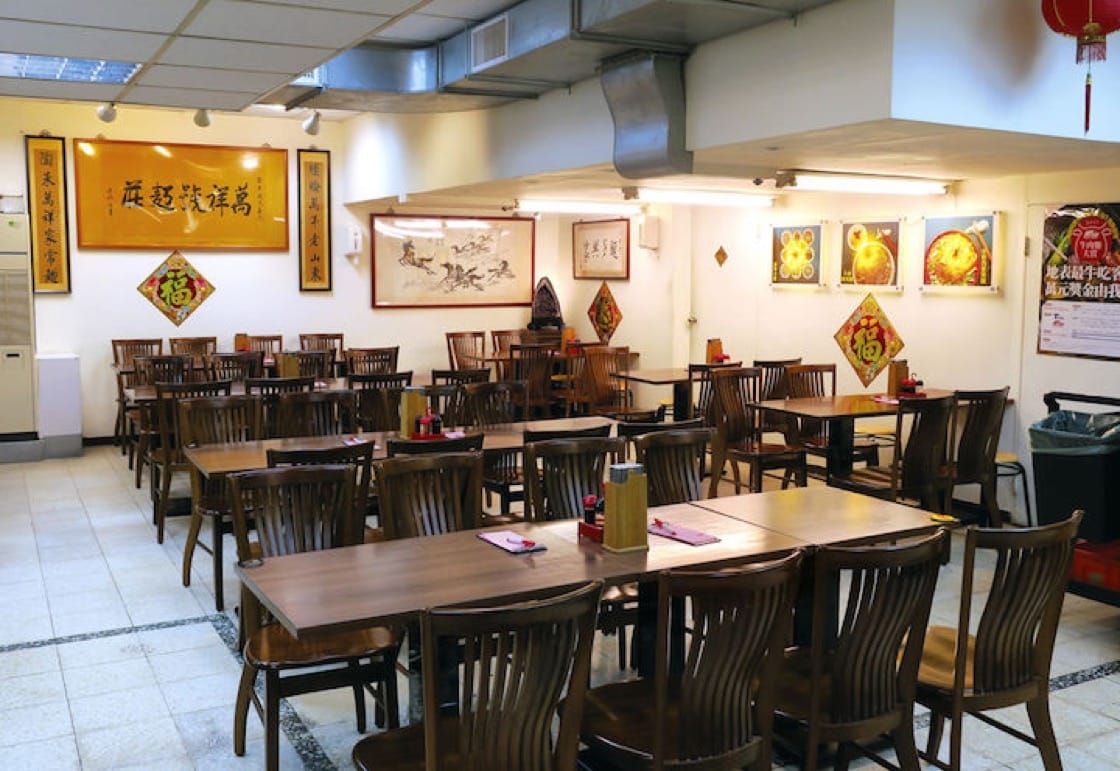 Lao Shandong Homemade Noodles has been cooking up traditional flavours for three generations.
One of the most iconic beef noodles shops is Lao Shandong Homemade Noodles, tucked away in the Wan Nian Building for nearly 70 years. Deservedly chosen as a Bib Gourmand restaurant this year, Lao Shandong homemade noodles treats nothing lightly, from the indulgent broth to handmade noodles to well-cooked beef. This mentality of concentration is what keeps the restaurant ahead of the competition after three generations.

In addition to old flavours, it also preserves the memories of many Taipei natives. Hunting for comic books and figurines in the Wan Nian Building, followed by a stop at Lao Shandong remains a popular practice among youths.

Another Bib Gourmand recipient is Lin Dong Fang Beef Noodles, which is one of the most famous beef noodles restaurants. Its broth is renowned for capturing the essence of a large amount of beef entrails alongside various medicinal herbal ingredients in Chinese culinary culture.

The soup’s aroma is imaginably deep and bright. On an amusing note, after handing the business over to his offspring, Lin Dong Fang’s father who first opened the shop, set up a new beef noodles restaurant on Zhuang Jin Road. It takes the herbal notes in the broth to an even higher level. 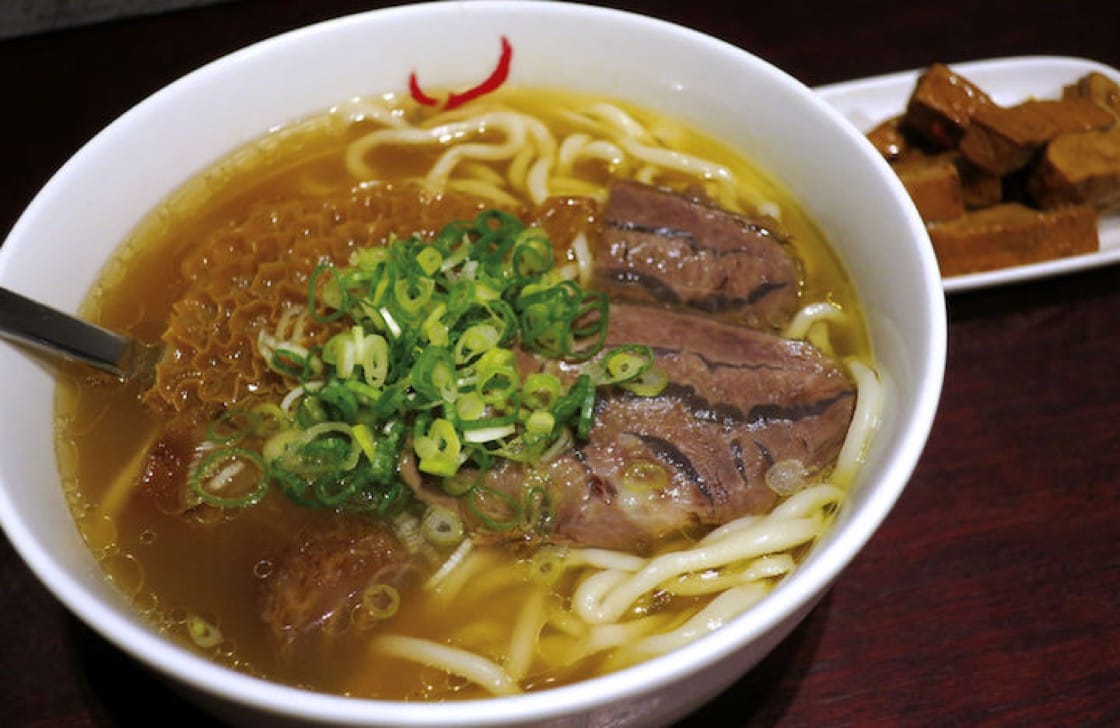 Having trained in a western restaurant, the shop owner prepares the broth using a western approach. The soup comes from a combination of a good amount of local cow’s bones and Australian short ribs. It makes up one of the joint’s most successful components, on top of an intoxicating spicy bone marrow oil.