A majestic Dutch colonial-style bungalow perched on top a coconut tree-fringed valley in Ubud, Bali, is upping the ante in the resort town’s burgeoning fine-dining scene.

Called Apéritif, the five-month-old contemporary global restaurant occupies a verdant vantage point in the luxury Viceroy Bali resort, which specially built the sprawling 1,000-square-metre complex for its ambitious fine-dining project. The 60-seat restaurant, which was set up at a cost of S$2.7 million (US$2 million) and took about 18 months to complete, is impressive. It boasts an imaginative menu, guéridon service, extravagant settings, an international team and a greenhouse that is home to more than 30 vegetables on the resort’s lush grounds.

Named after the European tradition of enjoying pre-dinner drinks and snacks, the restaurant aptly begins its meals with an aperitif. Lounge on a Chesterfield leather sofa surrounded by tall bookshelves in the bar which resembles a debonair gentleman’s club. Sip on local-inspired cocktails such as kemangi (lemon basil) cooler and negroni concocted with tangy tamarillo fruit.

After drinks, diners adjourn to the palatial dining hall straight out of the Great Gatsby, with expansive Palladian windows, monochromatic tiles and sweeping chandeliers. 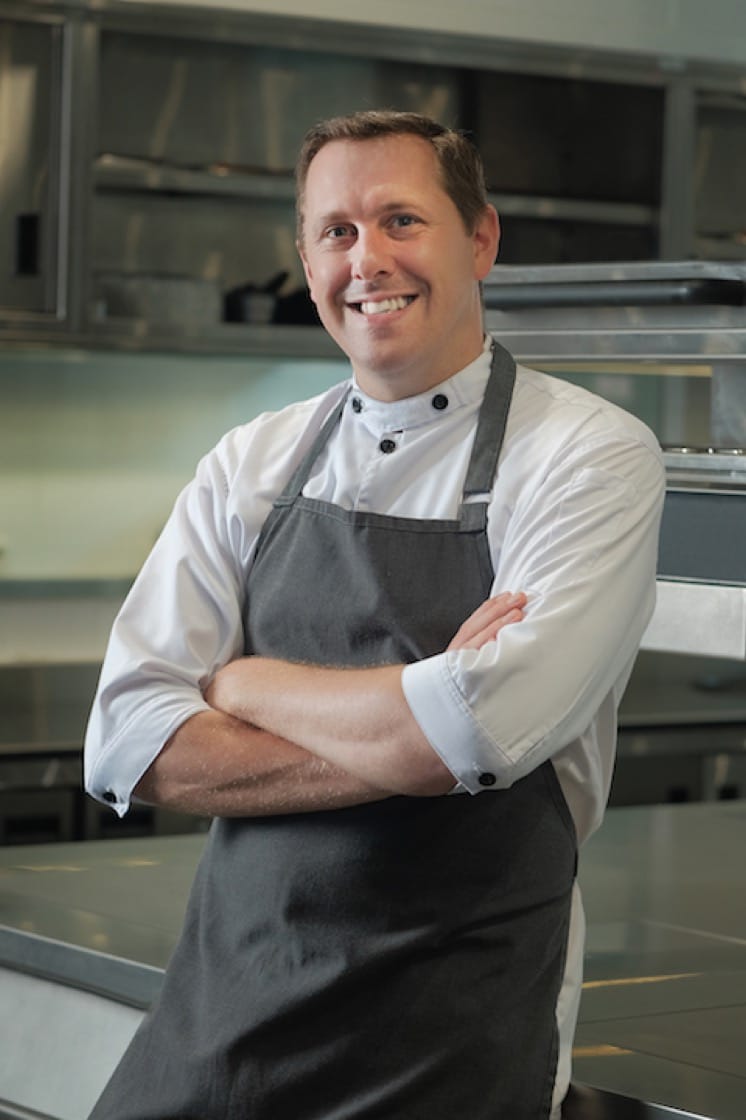 A step up to fine-dining

Despite its drinks-centric name, the spotlight remains very much on the cosmopolitan cuisine by Apéritif’s executive chef Nic Vanderbeeken (left), who waited five years for his passion project to take flight. Previously heading CasCades, the resort’s casual restaurant, the Belgium chef had craved a platform to channel his culinary energies and aspirations.

Vanderbeeken is building on the momentum of a wave of fine-dining restaurants in Ubud that includes Locavore, a pioneer of Indonesia’s food movement, which opened in 2013, and American pastry chef Will Goldfarb’s Room4Dessert, which became a Netflix sensation last year.

Vanderbeeken believes that the time is ripe to step up fine-dining offerings in Bali. He says: “Like Ubud’s more small-scale artisanal culture, diners who come here desire more than just ‘resort food’ They are well-travelled and highly knowledgeable about food.”

As a reflection of the diverse mix of tourists (most of them are from the United States, Europe and Japan) that Viceroy Bali receives, Vanderbeeken has opted for an open approach to his menu at Apéritif. While the building blocks of the dishes may stem from his training in French cuisine, it assimilates elements from Indonesia — spices such as galangal and turmeric (Vanderbeeken’s favourite) to creative riffs on gulai curry and rendang — and influences from other countries such as Japan, Peru and his home country, Belgium. 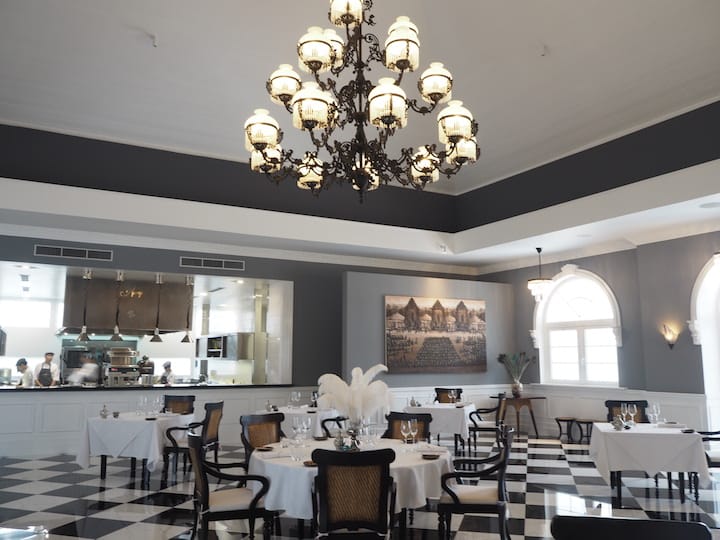 Apéritif's main dining hall looks straight out of the Great Gatsby, with expansive Palladian windows, monochromatic tiles and sweeping chandeliers. (Photo: Kenneth Goh)
Inspiration from across the Indonesian archipelago is sprinkled across the menu (from 1,350,000 Indonesian rupiah or S$130 for a 8-course degustation menu). The humble karedok (main photo above) is refined in a concentric assemblage pickled zucchini, daikon and spinach laden with a velvety tofu emulsion and peanut sauce. The star of the Papua Crab dish is the luscious gulai sauce — enlivened with spices like turmeric, galangal and lemongrass — that gels well with the naturally sweet meat of shredded blue swimmer crab.

The French classic duck magret is injected with a touch of flavours from ayam betutu (Balinese roast chicken), which is one of the island’s most well-known dishes. Instead of the traditional orange sauce, shallots, turmeric and candlenuts are used in the sauce’s bumbu spice mix, which lends it a sweet and savoury touch. The side of koji paste that is topped with fermented vegetables adds an umami element, while the duck consomme rounds up each mouthful with lightly sweet and herbal finish. 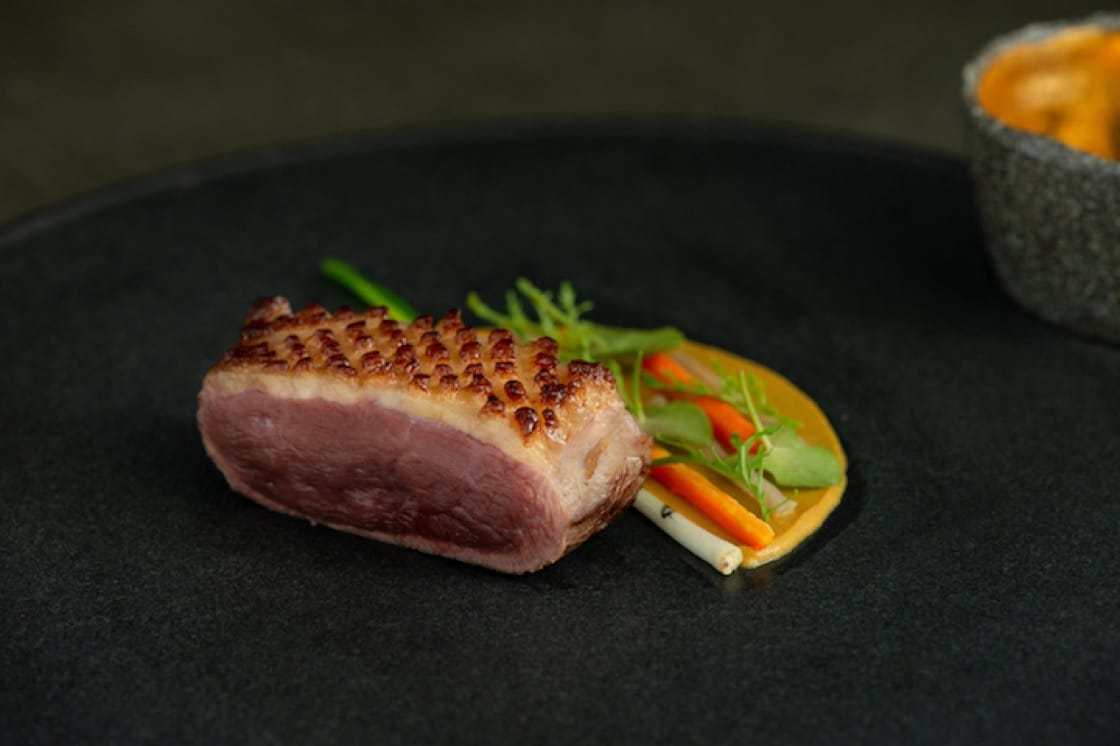 The French classic duck magret is injected with a touch of flavours from ayam betutu (Balinese roast chicken), which is one of the island’s most well-known dishes. (Photo: Apéritif)

Venison Wellington, which is another favourite among the Western tourists, has an indulgent core of the succulent meat wrapped in buttery puff pastry. The star of the dish is the sweet beef rendang sauce that is redolent of cinnamon and cardamom.

As a nod to his roots, there is the Martino that is inspired by Belgium’s Martino Baguette, a heap of beef tartare piled on bread. Vanderbeeken reimagines it as a tile of tartare jazzed up with quail egg, potato crisps and pumpkin meringue for some crunch.

On his eclectic global cuisine, Vanderbeeken says it gives him the flexibility of bringing in flavours from around the world. He adds with a laugh: “My mind works in a chaotic way and I like the freedom of tapping on flavours and styles from other cuisines.” He also favours more pickled and fermented flavours that inject some oomph into his dishes.

When asked about the restaurant’s hefty investment to create a fine-dining vibe despite the rise of casual concepts, he explains: “Call me old school but fine dining has to have a refined atmosphere, good service, quality on the plate and giving diners a refined experience.” 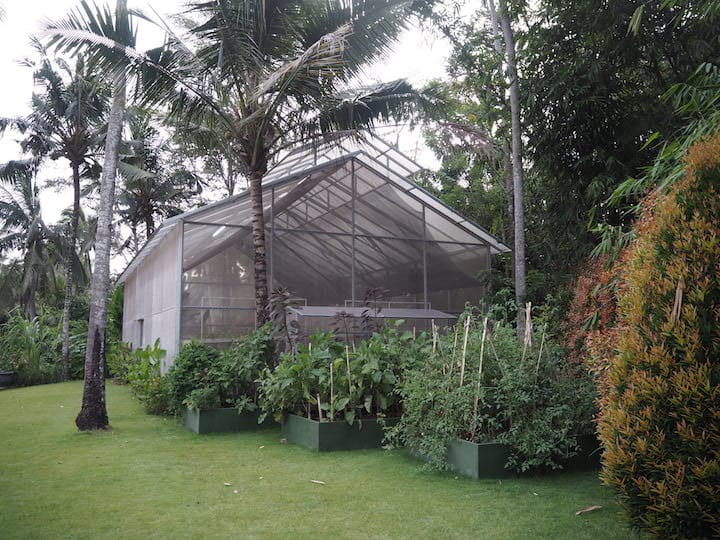 Standing Out In The Ubud Fine Dining Scene

Over the past five years, Vanderbeeken has seen a marked transformation of Ubud, a former dining backwater rising to a vibrant gastronomy hotspot in Southeast Asia. One of the early birds in the Ubud’s fine-dining scene was Mozaic Restaurant, which opened in 2001 and is known for its French cuisine infused with Indonesian flavours.

He recalls: “When I arrived in Ubud, the scene was still quite backwards. Molecular gastronomy was starting to pick up here, whereas it was starting to get passé in Europe.”

Over the years, an exciting slew of fine-dining restaurants injected some buzz into Ubud’s food scene. Five years ago, Locavore made a splash with its innovative tasting menus that mainly use locally sourced ingredients and influenced by European and Indonesian cuisine. Other establishments include BLANCO Par Mandif, which offers haute Indonesian degustation menus and Kubu Restaurant that serves Mediterranean-European cuisine in bamboo dining cocoons.

Vanderbeeken also notes that the growing number of guest chefs that have participated in cooking collaborations in Ubud, including Odette’s Julien Royer, have also boost its clout as a dining destination.

On what makes Apéritif stand out from the competition, Vanderbeeken says that it lies in the scale of investment and effort in creating an refined, albeit old-school, dining ambience, complete with weaving in a bar concept, white linen table cloths, bespoke ceramic tableware and silver cutlery, and sourcing for quality ingredients around the world to match its eclectic menu.

Unlike others, the restaurant is also not marketed with the Balinese requisite of rice padi fields and lush gardens, which drives the focus squarely on the restaurant. He says: “We are more open-minded about our cuisine as we take ideas from all over the world and present them in a setting that make people forget that they are actually still in Ubud.” 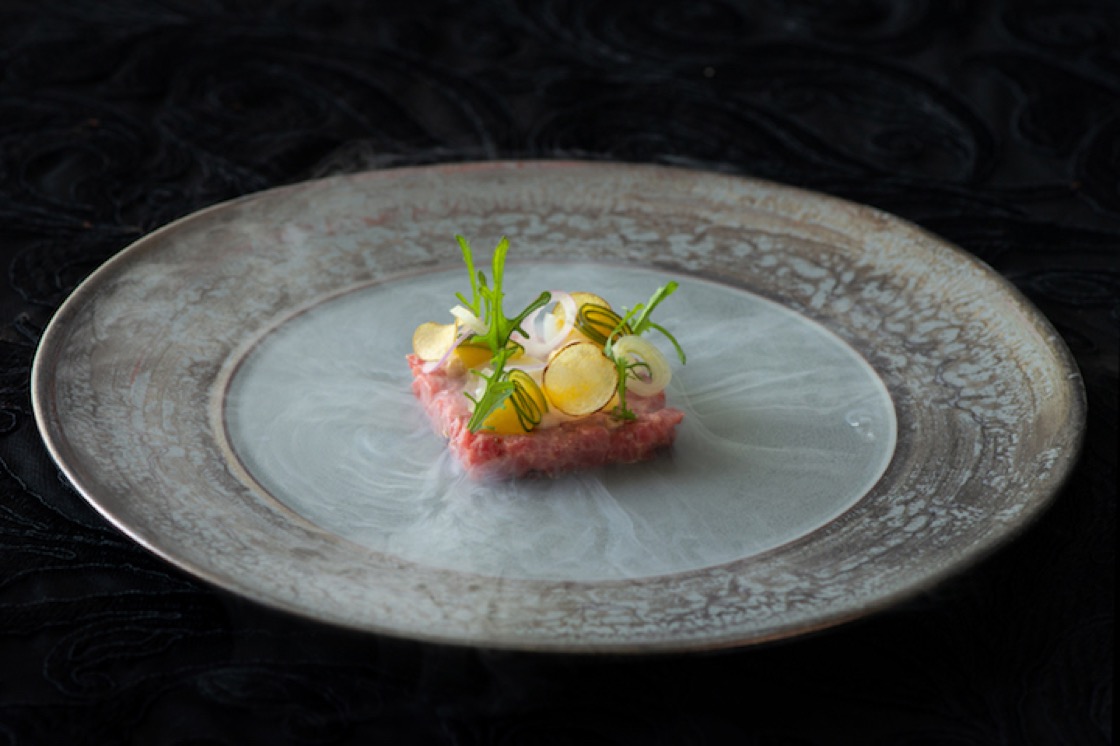 The Martino, which is inspired by Belgium’s Martino Baguette, is reimagined as a tile of tartare jazzed up with quail egg, potato crisps and pumpkin meringue. (Photo: Apéritif)

Facing challenges in the fine-dining industry

About 70% of ingredients that Apéritif uses are from Indonesia, including mainly vegetables and herbs from farms in northern Bali. He points out that the quality of local meat, such as venison and duck, and seafood, such as lobster, still do not make the cut and have to be imported. Having ready access to quality ingredients is one of the biggest challenges that Vanderbeeken faces in running a fine-dining restaurant in Bali. 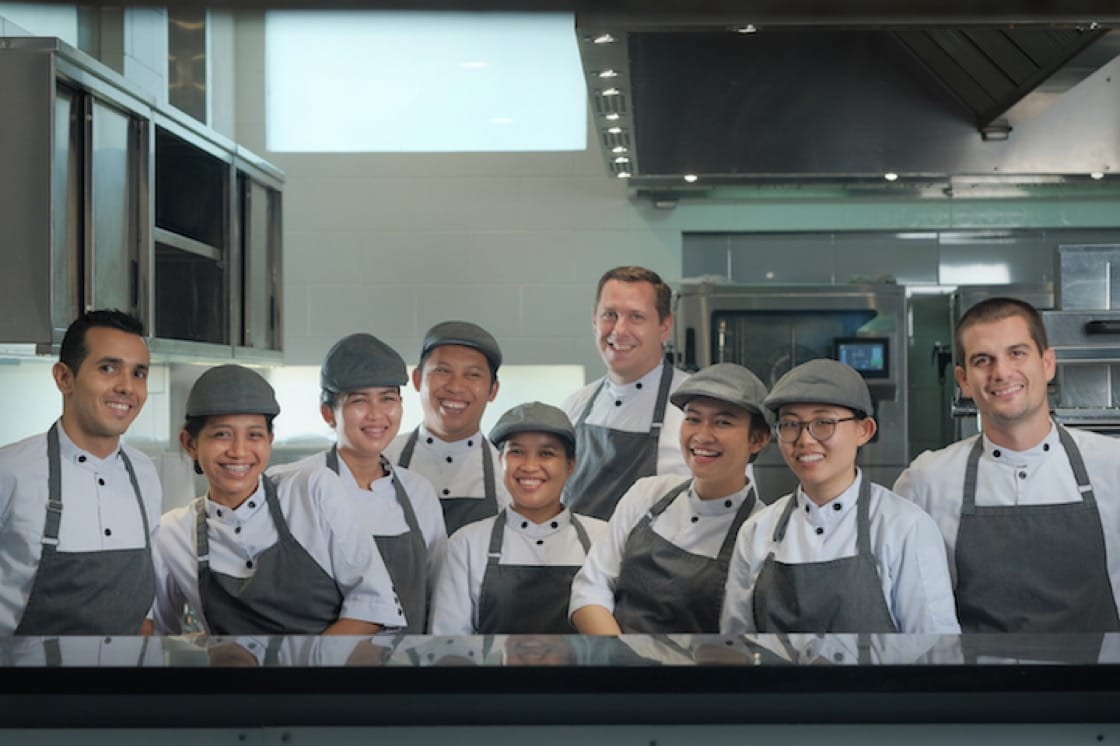 Finding highly skilled manpower in a nascent fine-dining scene is another headache for Vanderbeeken, as potential employees often lack finesse, passion and knowledge. His kitchen team is a surprising sight in Indonesia’s restaurant industry — his team of nine is predominantly made up of female chefs who are game to broaden their horizons. The team is supported by a regular flow of about six trainees. He adds that he has also been receiving requests from chefs around the world to work in Apéritif.

Despite the challenges, Vanderbeeken is optimistic that Bali is en route to becoming a bona fide dining destination.

He says with a smile: “I hope to build a community of chefs, who can share information and experiences. The quality of ingredients can improve when there is greater demand from more restaurants. I can feel that there is potential for the scene to grow and something exciting is happening here.”

The beauty of rendang is in harmonising the bounty of nature into a single mouthful.