Flanking the open-concept kitchen in the month-old French fine-dining Restaurant JAG in Duxton Road are six shelves that catch the eye of most diners. Placed cheek by jowl on the shelves are jars brimming with 40 types of herbs from the French Alps.

The eye-catching line-up comprises dried leaves and flowers in all shapes and sizes, from the grain-like thym citron and angelique to stalks of hysope flowers and bright crimson monarde petals. Open the jars and a wave of intriguing scents emanate from herbs such as the floral and apricot-scented coucou flower petals and ortie leaves that smell uncannily like a seafood stock.

The herbs, which are grown in the mountainous Savoie region in south-eastern France, are a cornerstone of chef-owner Jeremy Gillon’s multi-faceted French cuisine. The Normandy-born chef uses these herbs in creative ways in his menu — besides using them as garnishes, for seasonings and to flavour sorbets and canapes, he also makes vinegar and syrups from them.

Speaking to the MICHELIN Guide Digital, Gillon says: “When I cook, I already have the colours and flavours of the dish in my mind, so I use these herbs to match the flavour profiles that I imagine for my dishes.” 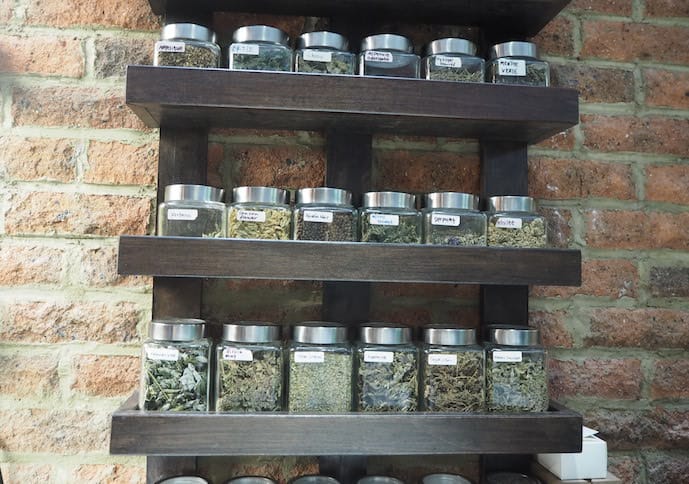 Chef Jeremy Gillon has brought in about 40 types of herbs from the French Alps. (Credit: Kenneth Goh)
The herb library takes pride of place in his new 25-seat restaurant-bar that took over the space that was vacated by contemporary Asian restaurant, Ards. JAG, which stands for Jeremy Anant Gastronomy, is a partnership between Gillon and restaurateur Anant Tyagi. The duo met at the now-defunct ME@OUE restaurant, where Tyagi was the assistant general manager and Gillon was the executive consulting French chef. The seeds for JAG were planted as early as four years ago as “we are friends and have the same expectations for service and food,”, shares Gillon.

For four years, the Frenchman shuttled between Singapore and France every six months as he double-hatted as a chef in ME@OUE as well as the one-Michelin-starred restaurant L'Epicurien in Le Montana hotel in Val Thorens in the French Alps. The restaurant closed in May 2016.

While working in L’Epicurean, he came across a herb forager who amassed a collection of herbs from the nearby mountains that have medicinal properties such as easing coughs and cold. Gillon’s interest was piqued and began experimenting with these herbs in his dishes. 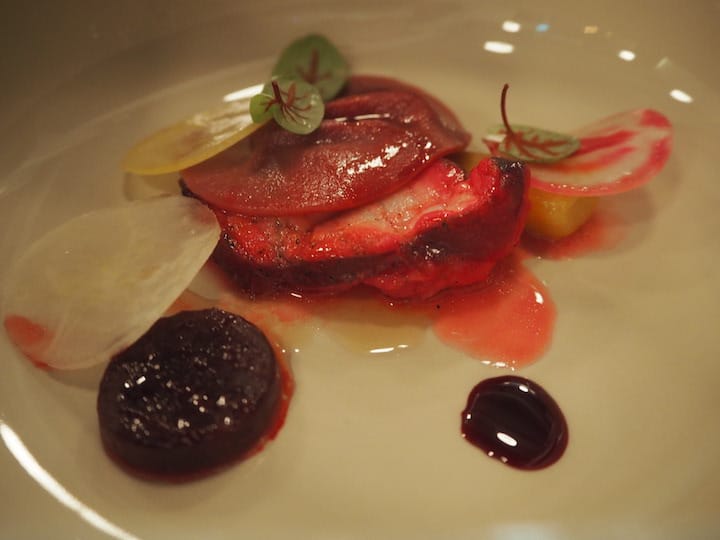 Chef Jeremy Gillon seasons his dish of beetroot-infused monkfish with sureau that is topped with a beetroot ravioli filled with monkfish jus. (Credit: Kenneth Goh)

One alpine herb he uses in his menu at Restaurant JAG is acchileé, which he serves on the side of his amuse bouche of an intensely-smoked egg yolk confit with different varieties of radish, horseradish cream, and watercress crumble and coulis.

Gillon explains that the bitterness of the acchileé serves as a bridge between the earthy nuttiness of the watercress, the crunchiness of the radish and the saltiness of the salmon roe. He also seasons his dish of beetroot-infused monkfish with sureau that is topped with a beetroot ravioli filled with monkfish jus.

He receives fresh batches of herbs every three months, but some of the rarer ones, such as monarde flower, are limited. In fact, his year’s supply of monarde is limited to one jar. “We need to be careful when using these herbs to plan for new dishes and cocktails,” he adds. “Whenever a new parcel of herbs arrives, it feels as exciting as receiving a present for Christmas,” he says with a grin.

Having access to a wide variety of produce and getting immersed in the Singapore food culture has kept him going in the Singapore culinary scene over the past four years. After his ME@OUE stint, he headed French restaurant Audace in Wanderlust Hotel for more than a year. In February, he served as the chef for French team at the PyeongChang Winter Olympic Games in South Korea before heeding the call to return to Singapore to start Restaurant JAG. 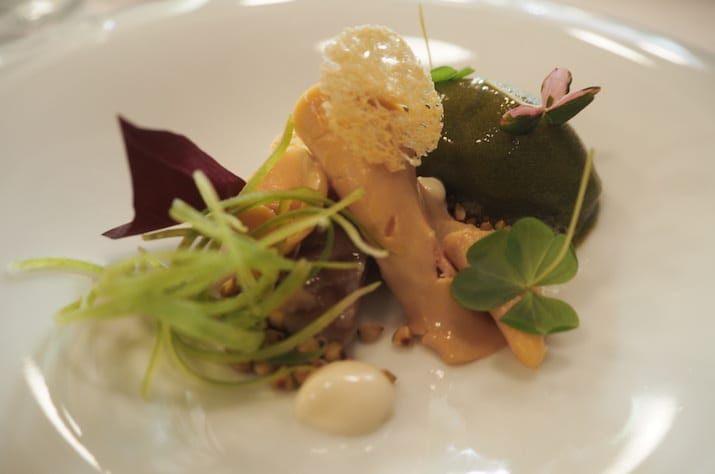 Foie Gras with smoked eel, green apple, sorrel sorbet and buckwheat. (Credit: Kenneth Goh)
Having a strong interest in local and Asian ingredients has spurred him to remain in Singapore. He says: “I love to discover and play with new produce and my dream is to work with a farm in Singapore that grows these herbs and continue learning about Asian ingredients.”

Despite Restaurant JAG’s fine-dining tag, Gillon points out the casual aspects of the restaurant: having lunch and dinner prix fixe menus that range from three to 10 courses (from $58++ to $218++) and an a la carte menu. Perking up the dining ambience is an energetic rock-pop soundtrack that pulsates throughout the cosy two-storey restaurant.

“We want to build a proper experience for people to try and appreciate our food. I believe that If you do it right and maintain the consistency of food quality and taste, there is a market for any genre of restaurant.”