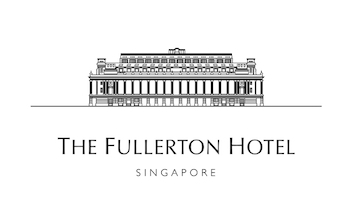 Memory is a powerful tool for chef Leong Chee Yeng.

The executive chef of Jade Restaurant at the Fullerton Hotel says: “My memory bank is filled with bits and pieces of the past, memories, flavours, artistic elements. Many a time, memories don’t just stop there, they take on a life of their own and will resurface at a certain point in time, like fireworks so splendid. For me, that’s exactly how I would describe creativity and that’s how I come up with inspired menus.”

The Fullerton Heritage Menu now available at Jade Restaurant is one such inspired menu — derived from the past with flavours of yesteryear.

The MICHELIN Guide Dining Out Series: Fuelling a Fire

A Menu From The Heart

“The Fullerton Hotel, now earmarked as a heritage building, used to be a post office,” Leong recounts. “Then, I used to come here to look for friends. We would fish by the river at night and have char kway teow, satay, chicken rice or tze char along the river. At that time, you still had a lot of hawkers peddling in the area and you would be having things like har cheong gai (prawn paste chicken) or hae biah (prawn crackers) along the river. These flavours are very close to my heart.”

The historic and beautifully conserved 400-room heritage hotel is itself a national treasure. Built in 1928, the then Fullerton Building was gazetted in December 2015 as a National Monument. Once home to Singapore’s General Post Office, the Exchange Room and Exchange Reference Library, it was also the prestigious Singapore Club at one point in time, playing a pivotal role in Singapore’s rich history.

Inspired by the heritage of the hotel, chef Leong, who joined Jade restaurant in September 2007 as chef de cuisine following an extensive and acclaimed career in Chinese gastronomy in Singapore and the region, took things into his hands.

The 52-year-old, who has always had a distinctive and personal approach to cuisine, carved out a menu from the heart, showcasing his expertise in kitchen techniques and knowledge of Cantonese specialties, as well as his own deep artistic sensibilities.

In fact, he sees himself as a bridge between the past and the present. 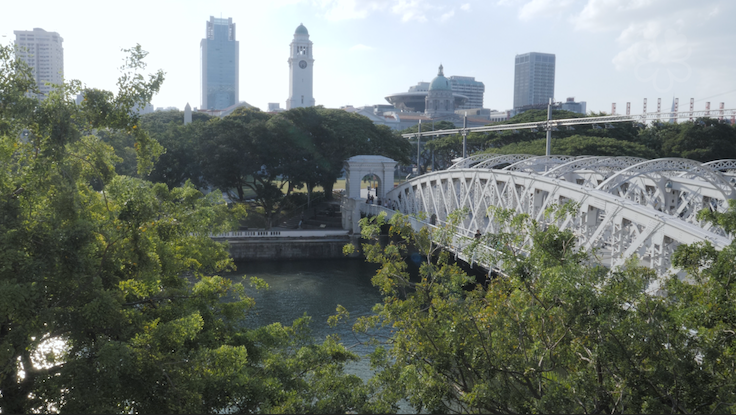 River Rhapsody, composed of Singapore Chilli Prawns, Stuffed Youtiao With Cuttlefish Paste In Sweet And Sour Sauce and Crispy Ha Cheong Chicken, is evocative of the sights and smells one would find along the Singapore River in the 1980s.

Perfection In Stone is inspired by the neoclassical architecture of the hotel and the chef uses a hot stone pot to serve up a comforting Fish Maw Soup With Fresh Crabmeat, dressed with tang oh (garland chrysanthemum).

Sampan Song brings to mind the bumboats that used to trawl the river. His rendition of these busy river scenes comes up in the form of a steamed silver perch, with aged bean sauce and a sprinkling of fried lard to add flavour.

Across The Generations is wok-fried Boston lobster with a duo of noodles. Sweet Notes of Home is yet another wistful piece, and essentially a medley of Almond Ice Shaving topped with Rose Jelly, Steamed Gula Melaka Sponge Cake and Pandan Puff Pastry.

The Art In Food

The creative-minded chef also wants to add art and exquisiteness to the dining experience at Jade Restaurant, which represents heritage, design and culture. “Food is part of my life and art weighs in heavily in my life. I enjoyed drawing a lot as a kid and my siblings loved art, and I found myself investigating creative processes like pottery, calligraphy, food carving and all sorts of artforms in my 20s.”

He started winning awards in art as well as culinary competitions.

“When I found that I couldn’t really find suitable plateware for the dishes I cooked, I consulted my brother who was into pottery and started making my own plates. So it was for a practical reason when I started out in art.”

He has not looked back ever since. 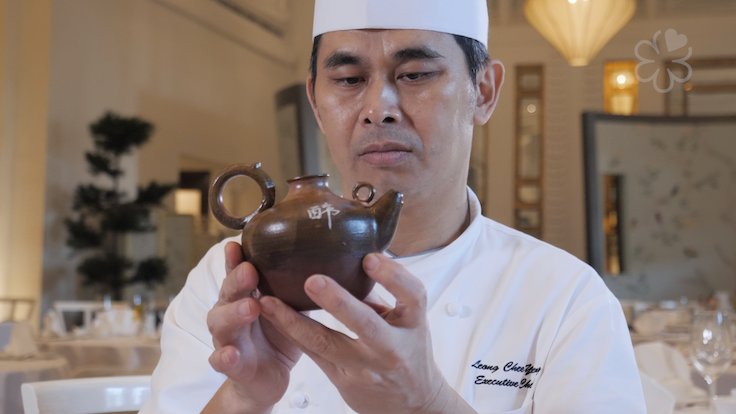 “I find that there’s a lot of complexity and challenges in pottery, especially when it comes to colouring. And I see a lot of resonance between this artform and cooking. In both crafts, I wanted to find my own way and put my name on it. Gradually, it became therapeutic to be on the potter’s wheel. I love to spend time thinking about cooking, ingredients, flavours and what kind of plateware I could use.”

He comes alive when discussing the differences and similarities between cooking and pottery.

“In cooking, temperatures go anywhere from 60 to 400 degrees. If you are behind the wok, the red and blue flames force you to act fast. But in the case of pottery at the kiln, temperatures soar gradually, starting from 20 to 1,300 degrees and you begin to see differences after two days. You have to keep watching the fire for over 30 hours, until you notice a white flame, sometimes going without sleep to add wood to keep the flames going. You have to be patient and be able to endure the process.”

He likens both cooking and pottery-making to be a refinement process and his creative style for both is rooted in traditional techniques but is also inventive and natural.

“For example, we see many Chinese restaurants featuring truffles and caviar on the menu. The crux is on us to find an appropriate way to use these ingredients without appearing to be responding to trends or being overly flamboyant, and for the dish to look and taste balanced.” 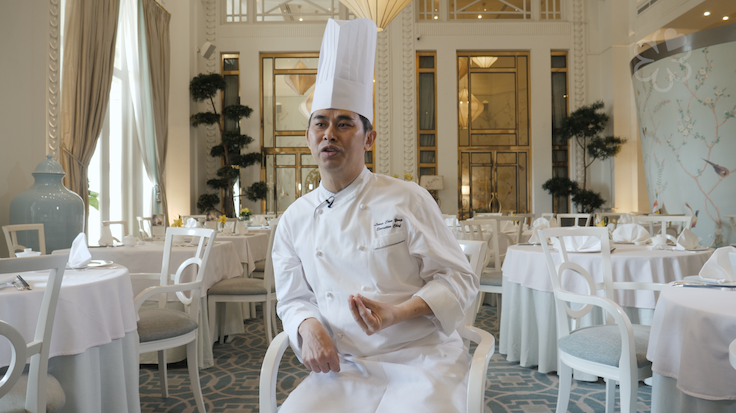 He recalls his first time setting foot in a kitchen in a pair of red clogs and realising he has found his place.

“Work in the kitchen entails long hours, takes a lot of energy out of you and requires strength — you have to persevere to stand your ground to be here for a very long time. But outside of the kitchen, you need to digest the work that is being done,” he says.

“The key is passion — if you have that fire inside, nothing can thwart you. You will keep thinking about how to better your technique your craft. Should you spend two more seconds to derive that wok hei? Has it got to do with the way the slicing is done? Or the fire, the tossing? You would inspect each and every process or detail and think of these even in sleep because you want to do better.”