He is not letting his paralysis get in the way.

Passion is the most common reason chefs give when asked why they decided to carve out a career in the kitchens. But for Singaporean executive chef Haikal Johari who heads one-Michelin-starred restaurant Alma by Juan Amador, this passion also gives him the drive to live.

The 39-year-old is wheelchair-bound. He was involved in an accident late last year which left him paralysed from the shoulder down.

Chef Haikal Johari, making the final checks just before dinner service.
“During my stay at the rehabilitation centre, I was still talking to my staff about new menus,” he says. “My mind was always at work. My body may not move but my mind was like, ‘I really wanna get back really, really badly.’”

This is in stark contrast to the days when he thought he had it all. Regarded as a celebrity chef in Bangkok where he was based, the father of two children had a daredevil streak that would take over whenever he mounted a super bike and raced around the track.

Advertisement
Advertisement
Today, chef Haikal is based back in Singapore and moves around in a wheelchair while being cared for by his wife. But he is not letting his disability hold him down: he still goes to work daily, squeezing in time for physiotherapy in between lunch and dinner service. He gamely takes on the challenge of maintaining the one-Michelin-star rating which was awarded to the restaurant when it was still headed by chef de cuisine Christophe Lerouy.

(Related: Flying The Flag: 8 Singaporean Chefs Fronting Singapore’s Michelin Starred Restaurants)
A menu revamp showcasing his creations was introduced soon when he took over the reins at Alma by Juan Amador. He also brought in chef Suffian Zaini, an old friend and colleague, to help him manage the restaurant in areas where he is unable to.

“Cooking actually helps me to forget the state I’m in,” he says. “I can’t walk but at least I can see, be in the kitchen and feel the adrenaline again during service time.”

It would seem like a prophetic fit, as Alma in Spanish means “soul” – and there’s certainly lots of it to be felt at the restaurant.

Watch the video for chef Haikal's remarkable journey of recovery and why cooking keeps him going: 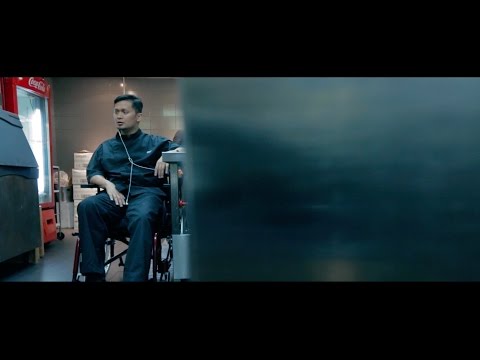 You've watched the video and heard chef Haikal's story, now why not dine at Alma by Juan Amador? Chef Haikal is our featured chef for the month of October, as part of the Michelin Guide Singapore Chef Showcase. He will be presenting an exclusive one-night-only dinner, where he will plate up original creations with culinary influences from around Southeast Asia. Book your tickets here.
Advertisement
Advertisement