A round-up of good eats and dining news from Singapore in May 2019.

This month, celebrate Vesak Day on 18 May, a holiday observed by Buddhists to celebrate the birth, enlightenment and death of Buddha, by learning more about your greens at Sprout, Singapore’s largest market. Check out three new Chinese restaurants — Zui Yu Xuan and Chao Ting that serve comforting Teochew cuisine, while Ho Fook Hei dishes up nostalgic Cantonese dishes. Can't get a seat at two-Michelin-starred restaurant Odette? Sink your teeth into a char-grilled chicken burger with garlic yoghurt sauce and “Frenchie” salsa created by guest chef Julien Royer at Burger Labo. 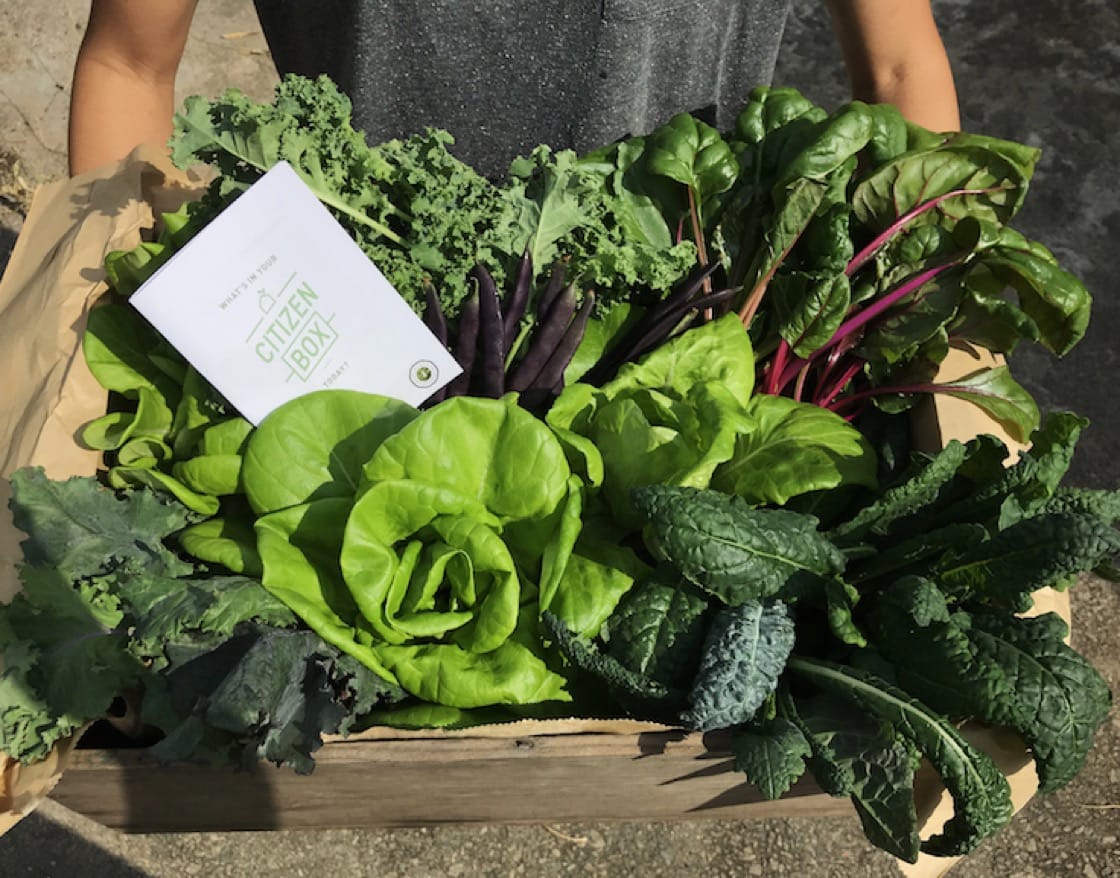 Visit Sprout For A Farmers’ Market Experience In The City

This weekend on 11 and 12 May, Suntec Singapore Convention and Exhibition Centre Hall 403 will play host to Singapore’s largest farmers’ market, Sprout. The second instalment of the farm-to-people festival will feature over 90 names in Singapore’s sustainable agriculture community and dining scene, such as farmers and growers, urban farming technology firms, specialty food and artisanal brands, as well as home-grown F&B establishments.

Graze on dishes by Plentyfull, Riverwalk Tandoor, Don8uri and The Dark Gallery, then shop for local produce, attend home-gardening workshops and cooking classes by chefs Han Li Guang and Emmanuel Stroobant of Michelin-starred restaurants Labyrinth and Saint Pierre respectively. Admission is free; sign up for the ticketed masterclasses and workshops here. 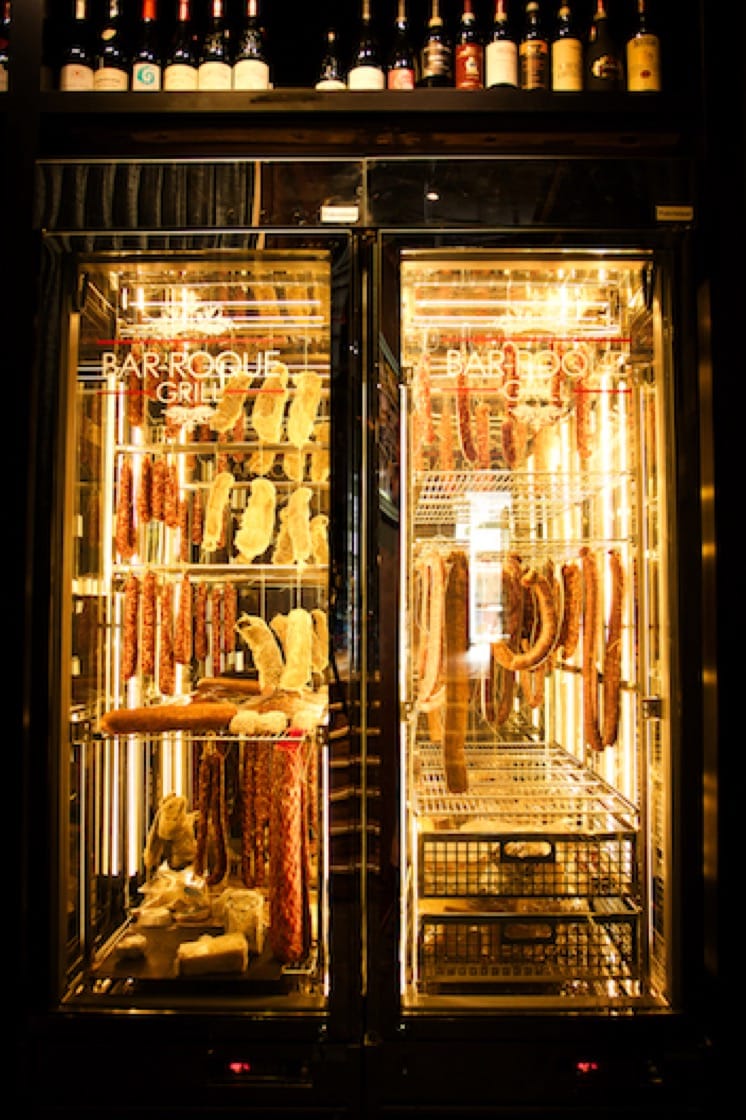 Bib Gourmand-lauded French restaurant Bar-Roque Grill & Bar will introduce its range of cheeses that are aged in the restaurant’s customised fridges next week. Paying homage to his ardent love for cheese, chef-partner Stephane Istel, who hails from Alsace, will introduce eight to 12 types of hand-crafted cheeses that are aged in-house. The cheese repertoire includes Tomme d’Alsace, which is washed with a light and fruity Alsatian wine and carries notes of mushrooms, grass and butter, Ossau Iraty, a cheese with notes of toasted wheat, roasted nuts, fresh grass and wildflowers. The cheese develops a subtle crunchy bite with time. Also in the pipeline are plans to roll out cottage cheese that is made from scratch.

Craving for something more robust? The fern-adorned Gres des Voges yields a slightly

orange-pink rind with a creamy, velvety interior and prominent aromas of mushrooms, garlic and milk. These cheeses are stored in fridges, in which the temperature, humidity and airflow can be controlled. Besides cheeses, Istel also cures his charcuterie, which includes chorizo, dry sausages, duck prosciutto and pork lomo. 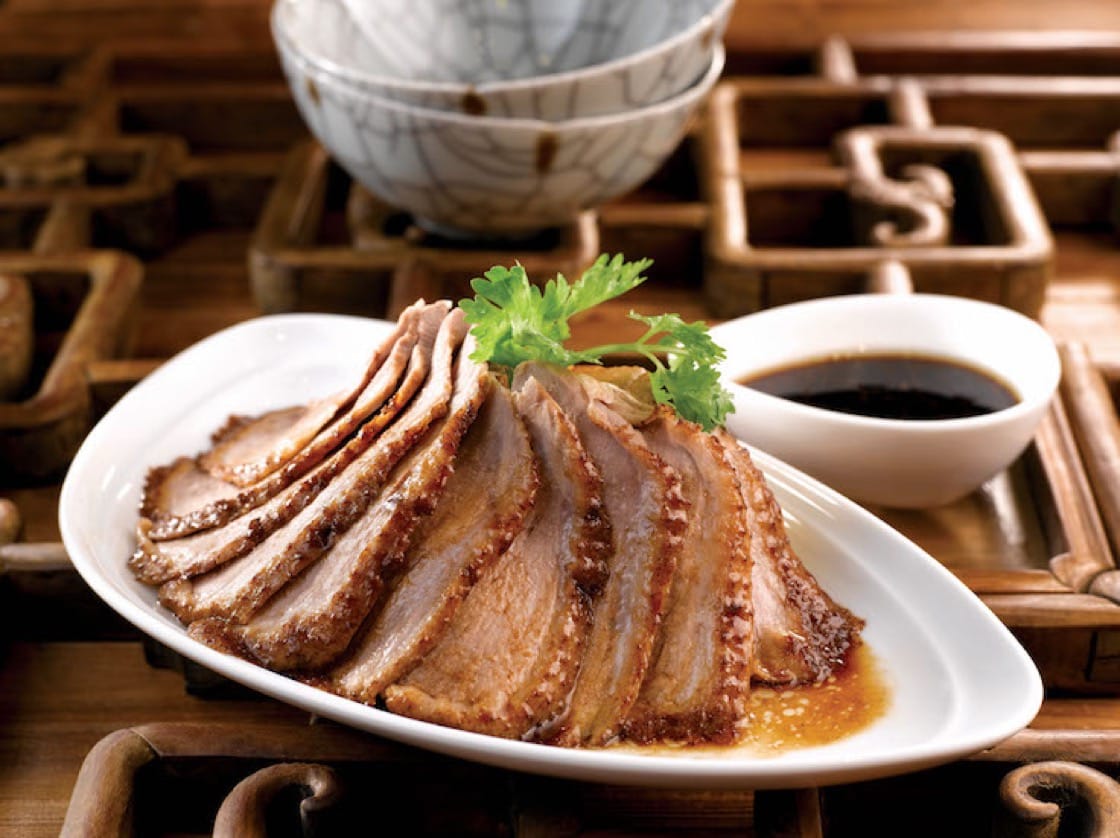 Housed within a two-storey heritage building in the historic Far East Square precinct is JUMBO Group’s newest restaurant, Zui Yu Xuan Teochew Cuisine. Step through the gates of the traditional Chinese doorway and enter the restaurant through a beautiful open courtyard.

The contemporary Oriental space sets the stage for the refined, authentic Teochew fare with signatures such as Deep Fried Liver Roll and Wok Fried Kway Teow With Diced Kai Lan and Preserved Radish, to the deliciously gooey Teochew Oyster Omelette and Teochew Puning Fermented Bean Chicken. For a meal on the go, pop by fast-casual sister eatery Chao Ting next door for a comforting bowl of Teochew pao fan, which is cooked rice simmered in a light, tasty broth. 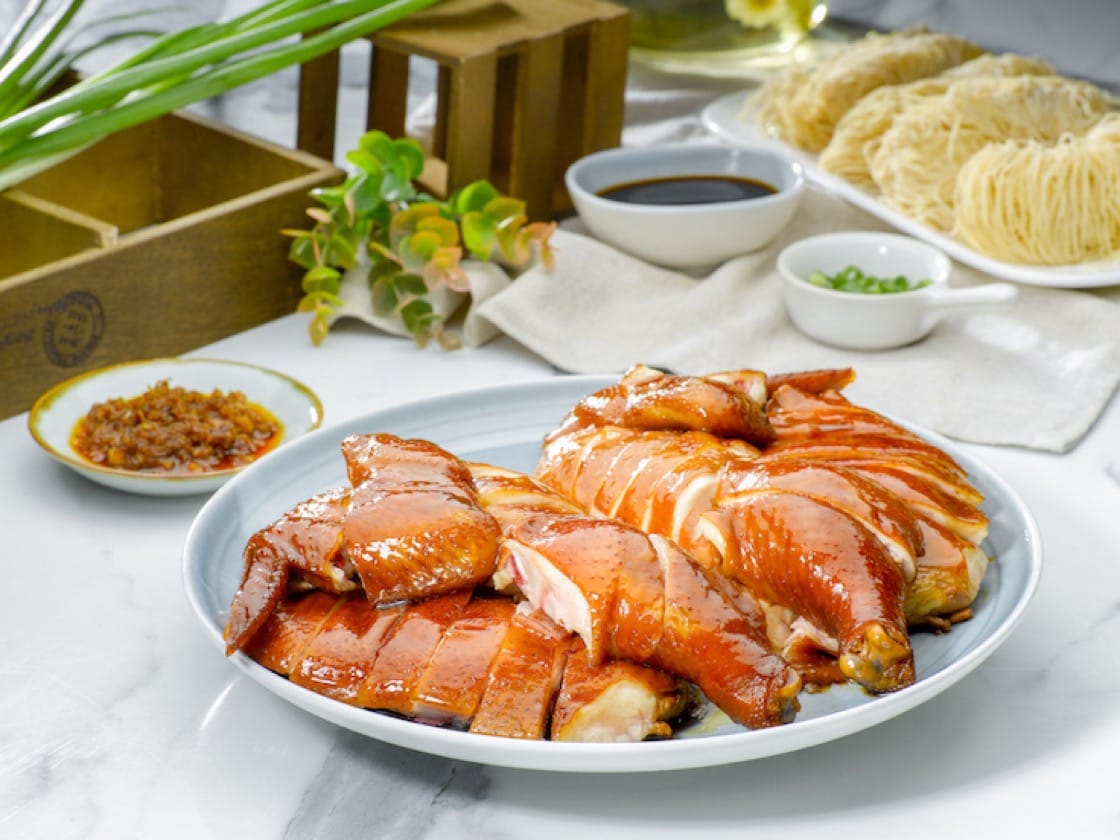 Chinese restaurant group Joyden Concepts has opened its debut casual eatery, Ho Fook Hei. The old-fashioned restaurant name translates to “prosperity and good fortune” in Cantonese. The restaurant puts the spotlight on time-honoured Cantonese dishes, such as its Specialty Rose Wine Soy Sauce Chicken, which is brined overnight and braised with its home-aged soya sauce — a concoction of more than 12 Chinese herbs and spices and rose wine from Hong Kong.

Can’t get enough of the chicken? Have it in the Specialty Rose Wine Soy Sauce Chicken Noodles, which is served with egg noodles custom-made by a Hong Kong noodle company. Other dishes to order include the Honey-Glazed Black Barbecued Pork that boasts a lovely caramelisation, cod fillet doused in old ginger sauce or Nonya assam sauce, and Cantonese congee cooked with red grouper fish fillet, pork balls or seafood. 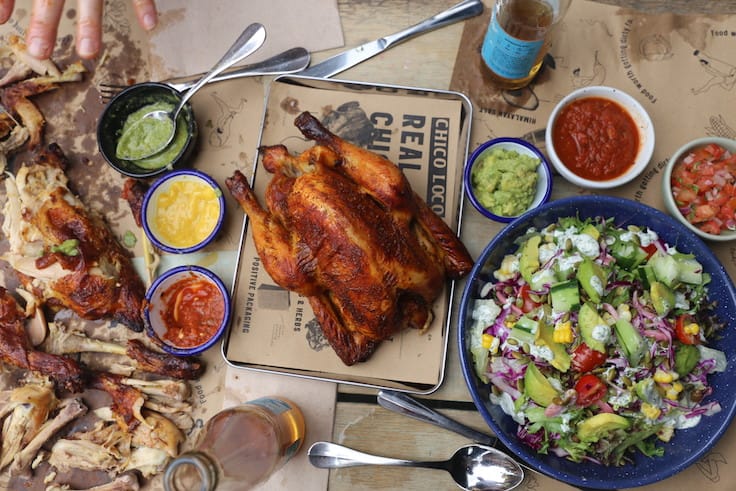 Mexican restaurant group The Loco Group has another feather in it cap with its fourth outlet, Chico Loco, which is aptly centred around spit-roasted chicken. The birds, which are antibiotic- and hormone-free, are brined in an umami marinade that is infused with agave nectar before they are basted with a house blend of 11 herbs and spices such as achiote, dried oregano and mustard powder. Then the chickens are roasted over fire to yield fork-tender meat with a smoky finish. The spit-roasted chicken comes in three sizes.

Side dishes include tomatillos and sesame, som tam-inspired Chicoslaw with mango and green papaya, and tortillas. Other chicken-centric dishes include the Huge Chicken Taco, which has spit-roasted pulled chicken, chipotle mayonnaise, guacamole, cheese and coriander piled on an open-faced taco. 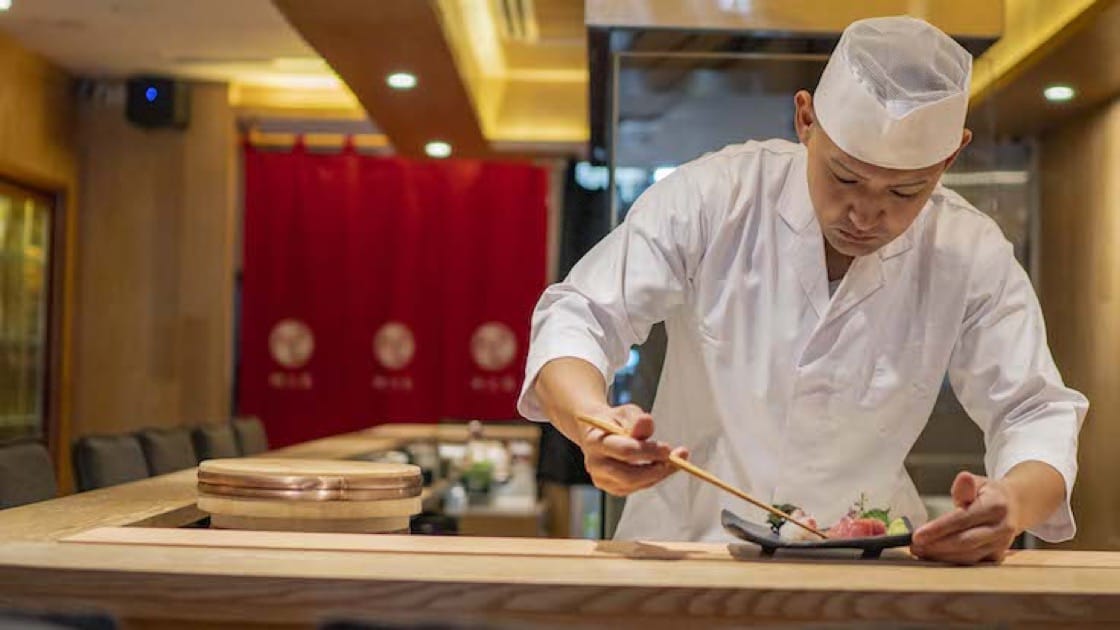 Love indulging in omakase meals but cannot afford the hefty price tag? Jimoto Dining is making Omakase meals, the Japanese tradition of chefs creating meals from seasonal ingredients, more wallet-friendly. The Omakase courses, which include an appetiser, sushi and dish of the day from the hot kitchen, uses cooking styles such as yakimono (grilled), agemono (deep-fried) and nimono (stewed). Omakase meals start from $55+ for a five-course Toki menu that is served from 6 to 7pm.

The sushi is a highlight here — it is made with Sasanishiki rice from Miyagi Prefecture that is seasoned with Chef Takahiro Sato’s secret vinegar blend. The 14-seat restaurant, which is housed in a Joo Chiat shophouse unit, is helmed by Sato, who used to work in Hashida Sushi here and Melbourne’s Kakizaki restaurant.

BurgerLabo Has Burgers Down To A Science

There are burgers, and then there are burgers where no stone has been left unturned in pursuit of perfection. Nekkid in Gillman Barracks has been transformed by The Naked Finn’s Tan Ken Loon into a little burger joint whose size belies its ambitions. Every component of the burger is a result of meticulous R&D, like the specially sourced buns that are made with micro-ingredients that help it hold up well and the intentional stacking sequence so the patty is the first thing you taste when you bite into it.

Tan has lavished the most attention to the soul of the burger — the patty. The Basic Burger boasts a 170g patty made from a blend of four kinds of beef: grass-fed Angus beef neck, Toriyama Umami Wagyu A4 tenderloin, Aomori Gyu ribeye and Sendai Wagyu A5 brisket. The combination makes for a beefy, juicy burger, even when cooked to the recommended doneness of medium-well. Other noteworthy offerings include a char-grilled chicken burger with garlic yoghurt sauce and “Frenchie” salsa created by Julien Royer of two-Michelin-starred Odette and a vegetarian Almost Burger with a patty made from a blend of plant-based Impossible meat and Omnipork. 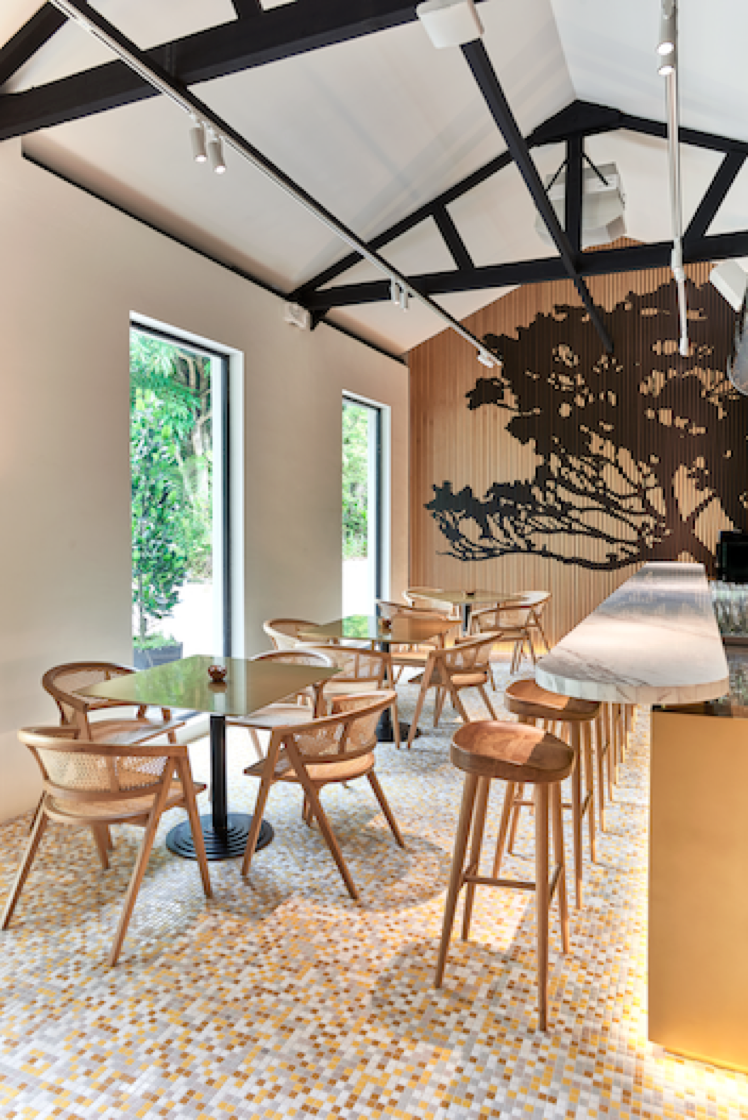 After having called the verdant Rochester Park home for more than a decade, Chinese restaurant Min Jiang has moved to an equally lush location in Dempsey Hill. The interiors, designed by celebrated architect Ernesto Bedmar, are a breath of fresh air: Soaring ceilings and glass walls let in streams of light, while the use of light wood, rattan and burnished brass tabletops give the space a romantic mod-Chinoiserie vibe.

At the helm is chef Goh Chee Kong, who has spent 17 years with Min Jiang. His updated menu of nostalgic dishes and contemporary Chinese creations are set to excite the palate. Other than Min Jiang’s signature of Legendary Wood-Fired Beijing Duck, tuck into heritage dishes like the Typhoon Shelter Squid And Soft Shell Crab, so named after the way fishermen

would deep-fry their catch with aromatics while taking refuge from a storm. The chef’s creative dim sum — dumplings shaped like goldfish and stingrays, glutinous rice “pumpkins” deep-fried to a golden brown hue and truffle vegetable dumplings stained blue with butterfly pea flower — are as photogenic as they are delicious.