If changing jobs during normal times is hard enough, imagine what it’s like when you take over a MICHELIN-listed restaurant, in the midst of moving across borders during a global pandemic on top of that. These international chefs in Singapore take it in their stride and have made the transition look smoother than expected at the same time. 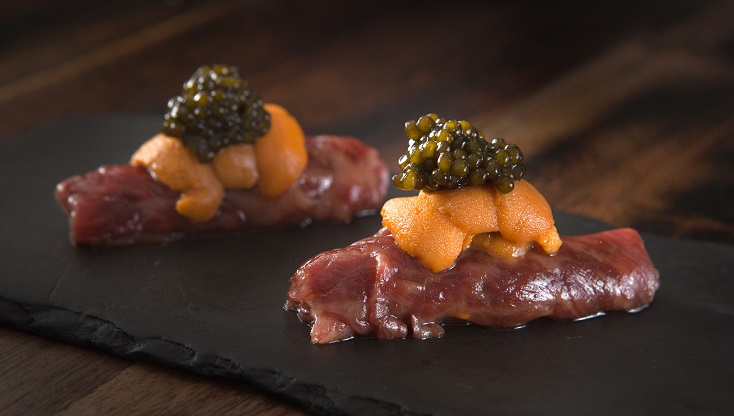 Burnt Ends' signature beef, uni and caviar. (Photo: Burnt Ends)
Burnt Ends
One MICHELIN Star, MICHELIN Guide Singapore 2019
Say hello to: Canadian-born Patrick Leano of Filipino heritage, who joined Burnt Ends in July
Previously: Prior to his Singapore move, Leano worked at MICHELIN Plate-recognised restaurants Coquille Seafood Bistro and Scarpetta in Shanghai. He replaces previous Aussie executive chef Jake Kellie, who worked for 2.5 years at Burnt Ends before moving to Adelaide to take on the head chef role at Leigh Street Wine Room.
Arrived in Singapore: In July, after being stuck in Hong Kong for three months while waiting out Singapore’s Circuit Breaker. “It was a great chance to unwind before starting a new job,” Leano reminisces. He’s known chef-founder Dave Pynt for 11 years, and during a visit during the Singapore F1 last year, Pynt filled him in about the job offer. 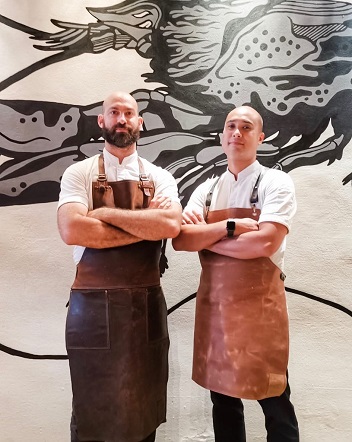 Dishes to look out for: Pork and lettuce that’s a twist on a Filipino classic, and warm, smoked kingfish ceviche marinated in fresh citrus. Dessert items bear the imitable Burnt Ends style, such as burnt honey financiers, smoked milk pannacotta and a highly complementary pairing of cheesecake and greengage plums, accentuated with shiso.
What’s next: “I’d say I feel about 50% settled in as I’m still trying to find out what I can and can’t do. It’s also about working with new people and learning about their personalities, getting used to guest requests and requirements. Facing the guests in an open kitchen is also something new to me,” says Leano. “There is a great foundation of classic dishes, traditional stuff and also Burnt Ends classics that we want to evolve. We’re not looking to retire them but to take them to the next level. We constantly think: How do we make them better? Are there better quality products that we can source? Are there new techniques with fire we can implement?” 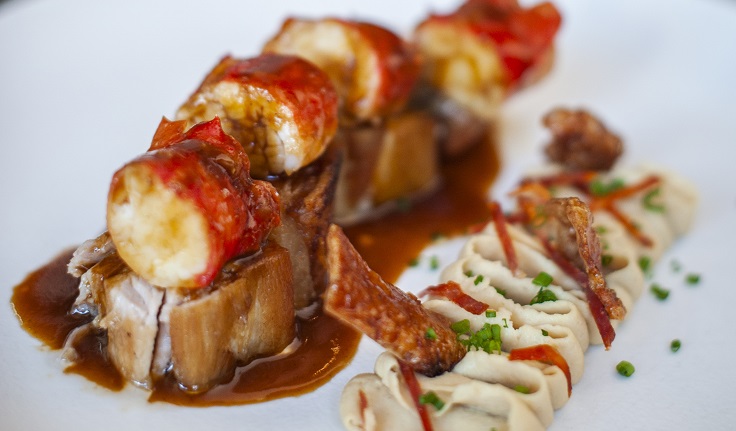 Say hello to: Barcelona native Juan José Carrillo, who arrived in Singapore in January 2020.
Previously: The St Regis Hotels & Resorts, Kuala Lumpur. Carrillo has big boots to fill, as he takes over from founding group executive chef from Jordi Noguera (who’s still part of the company as a co-owner). He also works closely with FOC Group’s ‘alma mater’ chef Nandy Jubany of one MICHELIN Star Restaurant Can Jubany.
More of Spain: The polished new menu was launched after Circuit Breaker, with about 70% of it completely refreshed. “After six years, we want to showcase more food styles and ingredients from all of Spain, not just Barcelona,” explains Carrillo. While many new and stalwart customers come back for the perennial favourites like croquetas and grilled octopus, there is now more variety for regulars, especially when it comes to the daily seafood display on ice, Carrilo’s pride and joy. Look out for oysters, scorpion fish, or wild caught New Zealand snapper. 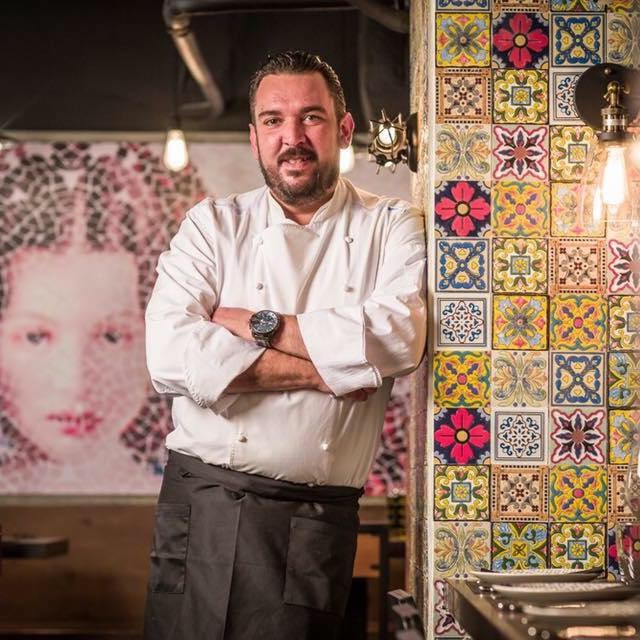 Dishes to look out for: Blue belly shrimp emphasise the pure sweet crustaceans from south of Spain, served with avocado mousse and green apple. The artisan cheese platter comes in an impressive vertical tower, while Alba white truffles make an arresting appearance on charcoal brioche toast. If you’ve not paid attention to salads before, the beetroot salad will change your mind with its perfect balance of strawberry, macadamia and smoked olive oil ice cream. Roast pork belly and glazed Alaskan king crab with chickpeas, chorizo and mar i muntanya sauce, is a Barcelonian dish where ‘sea meets mountain’, rendered in the piping of the chickpea and ‘peaks’ of crab meat. 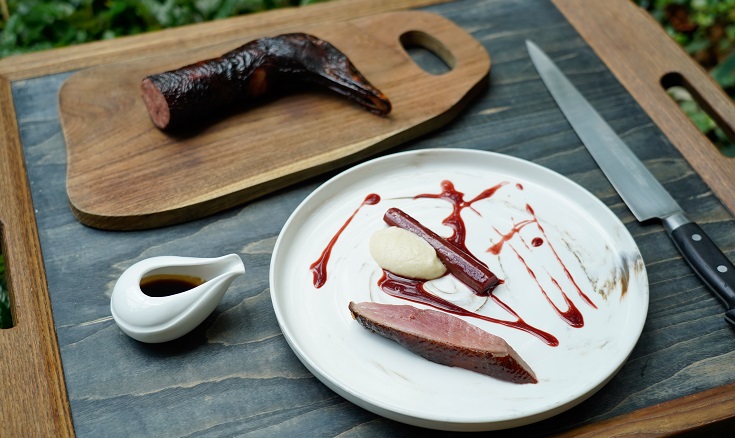 Say hello to: Aussie chef Michael Wilson, who joined Pollen in January. Also new is general manager Ashwan Suppiah, who joined around the same time.
Previously: One MICHELIN Star Phenix in Shanghai, where he was the founding executive chef. He replaces Steve Allen, who has returned to the UK.
A fully new concept: “Pollen now serves modern interpretive cuisine,” says Wilson, who has been working on the revamp for the past year. “I was recruited to execute my own vision and to push Pollen to reach its potential as a destination restaurant. To me, modern interpretive cuisine is about freedom, experimentation and imagination. Always evolving with the seasons, the cuisine is underpinned by a desire to celebrate fresh, quality produce sourced from around the world.” 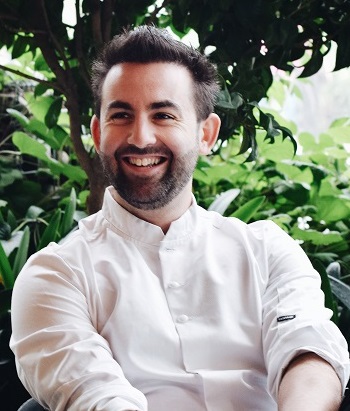 What to expect: There are now three menus; the Discovery menu ($118) offers three courses with canapés, pre dessert, and petit fours, while the Vegetarian and Chef’s Tasting menus (both priced at $168) are more extensive, offering eight courses.
Must order: The duck neck and foie gras sausage, served with a side of dry-aged duck breast. “The garnishes change with the seasons but the meat preparation stays the same throughout the year – diners can expect a whole caramelised duck neck stuffed with foie gras, duck leg and pork sausage meat, carved tableside,” Wilson describes. 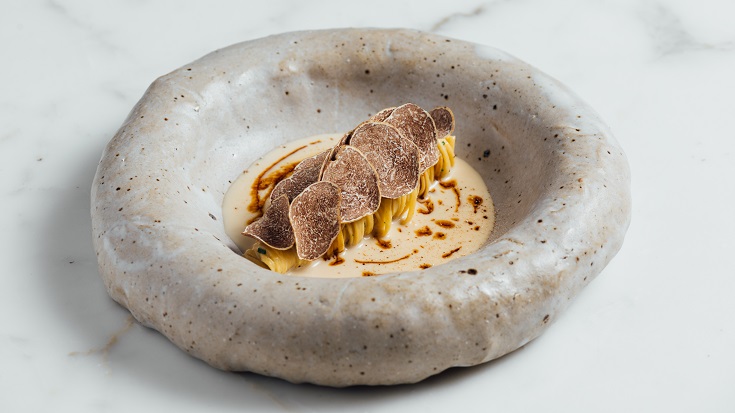 Say hello to: Piemonte native Matteo Ponti, who joined as chef de cuisine in late 2019.
Previously: MICHELIN Plate listed Forlino, where he worked for 2.5 years. He takes over from chef Kenny Huang.
Old soul: The fresh faced 30 year old chef is not short of fresh ideas, a boon at this progressive fine dining Italian restaurant which looks for quality ingredients from around the world. In the signature tagliolini, for instance, housemade pasta is tossed in a sea urchin, white wine and mirepoix sauce. His cooking may be modern and international, but is rooted in his mother’s kitchen and gardens, where he absorbed very traditional farm-to-table lessons as well as the art of sustainability where every part of the ingredient is used. “I want to create dishes that are as seasonal as possible, with memories, flavours and techniques that transmit emotions to my guests,” he explains. 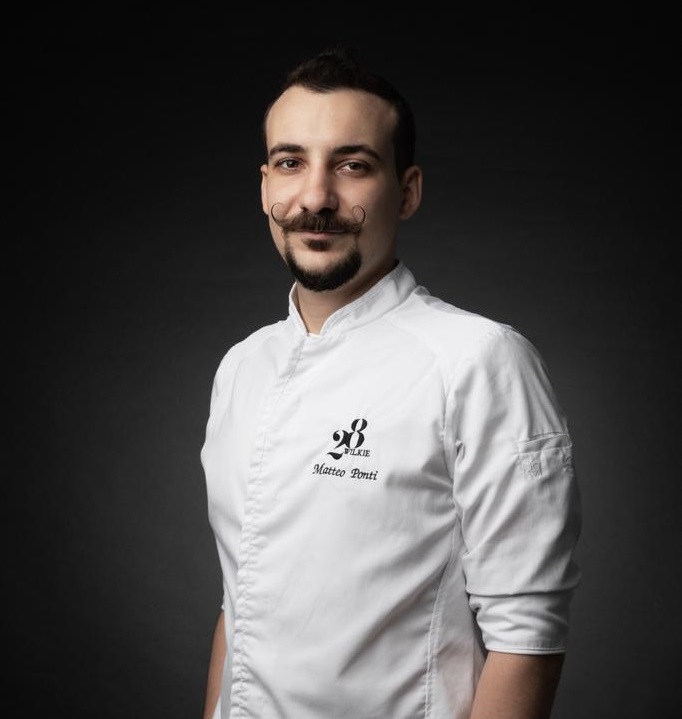 Dishes not to miss: There are two dinner menus, 5-course ($158) and 7-course ($198), that go by seasons. Ponti is particularly fond of playing with acidity, a reference to many of Piedmont’s sweet-sour sauces and use of vinegar. In the Ohmi A4 Wagyu Sirloin dish, he presents Roscoff onions (when in season) in four textures, including pickled slivers, a technique he learnt from his mother to preserve produce. While 28 Wilkie is also a caviar bar, Ponti uses the briny gems only when needed, such as in a topping for a perfectly delicate and silky chawanmushi.