American fast-food chain Five Guys, which is renowned for its burgers and gigantic sacks of peanuts that diners can help themselves to, will make its Singapore debut by this November. It will open in a shopping mall in a tourist-heavy shopping enclave in the central part of the Republic.

The chain will be brought in by home-grown lifestyle company, Zouk Group, which runs popular nightlife spot, Zouk. This will be the group’s first food and beverage concept in Singapore since it was acquired by the publicly-listed hospitality giant Genting Hong Kong in 2015. Last November, Five Guys opened its first outlet in Hong Kong, which is run by its parent company.

This marks the entry of yet another high-profile fast food chain in Singapore, in what is proving to be a bumper year for burgers. In April, American fast-casual restaurant chain Shake Shack opened to snaking queues in Jewel Changi Airport, which also saw the return of A&W after a 16-year hiatus. 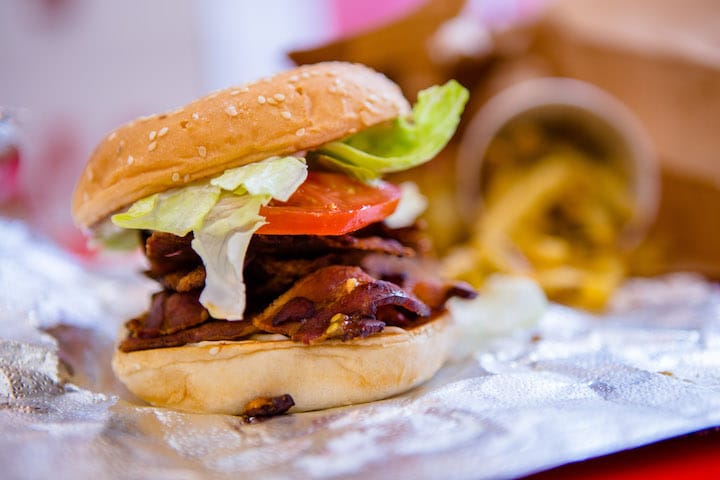 Diners can choose from 15 different toppings to jazz up their burgers at Five Guys. (Photo: Five Guys)
Fans of Five Guys, which has more than 1,600 restaurants in countries such as United States, United Kingdom and United Arab Emirates, will be pleased to know that most of its menu will be replicated in Singapore. The chain is famous for its burgers such as hamburger, cheeseburger and bacon burger, which feature grilled hand-formed beef patties sandwiched between sesame seed buns. Its selection of hotdog buns include Kosher Style, cheese, bacon and bacon cheese. it will also offer hand-spun vanilla milkshakes in flavours such as bacon and banana. Prices of the food will be at a similar price point to its Hong Kong outlet. The Singapore outlet will not be Halal-certified. As a Five Guys trademark, the outlet will be peppered with huge sacks of peanuts that diners can help themselves to.

Speaking to the MICHELIN Guide Digital separately, Andrew Li, chief executive officer of Zouk Group hopes to tap on Five Guys’ “cult-like following in the United States” that complements the Zouk’s predominantly millennial audience. He says: “Five Guys caters to a huge demographic, which covers the people that would go to Zouk, so we want to bring a well-rounded lifestyle journey, where people can eat, drink and club.”

Having a burger chain with a mass following has been part of Li’s growth strategy for the group’s nascent food and beverage arm. He shares that the group had also considered bringing In-N-Out Burger and Shake Shack into Singapore. He adds: “Burgers are accessible that cut across a wide range of demographics.”
Advertisement
Advertisement 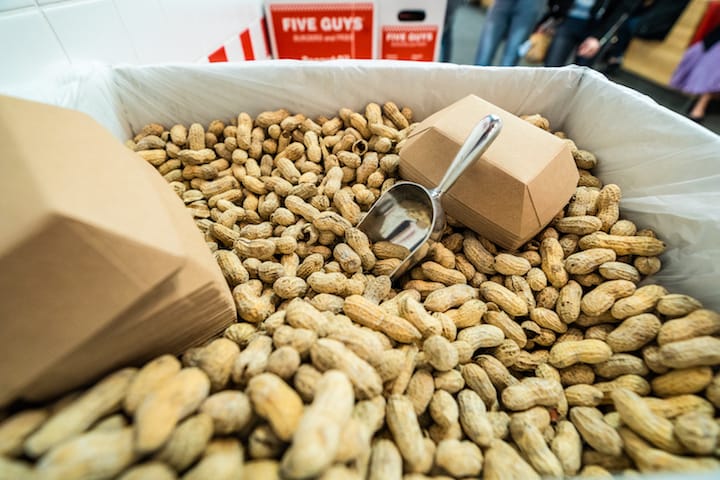 A Five Guys trademark, diners can help themselves to a free flow of peanuts. (Photo: Five Guys)
Singapore’s fast food industry is dominated by major players, such as MacDonald’s and KFC. On facing stiff competition in a saturated market, he says: “The food and beverage industry in Singapore is difficult, but if you provide a consistently good product and service with a strong branding, it gives you a footing that people will try the food for the first time at least.”

While Five Guys will not offer any new and localised products in Singapore, Li adds that the stand-out factor of Five Guys is that diners can play around with 15 types of toppings to customise their burgers and sandwiches. They include mayonnaise, grilled mushrooms, jalapeno peppers and mustard. To ensure consistency of food,  the Singapore staff will have to undergo a month-long training in its Hong Kong outlet, which will be the chain's training hub in Asia.

While plans to open more Five Guys outlets in Singapore are in the pipeline, Li remains cautious about expansion to gauge if the market can sustain a new entrant. There is also a possibility that the brand might expand to other entities in the Genting Hong Kong group, which also runs resorts and cruises.
Li, who is also the vice-president of lifestyle and F&B concepts of Genting Hong Kong, is ramping up the group’s food and beverage portfolio this year. It will also open FUHU Restaurant and Bar in Resorts World Genting in the third quarter of this year.

The contemporary restaurant, which is developed by Genting Hong Kong, will be fronted by chef Alvin Leung of Hong Kong's three-MICHELIN-starred Bo Innovation. Food-wise, the concept is British-inspired Cantonese cuisine, with dishes such as aromatic crispy duck and pancakes, sweet and sour pork, deep-fried garoupa with sweet corn. Li adds that there are plans to bring to the group's cruises and FUHU in Resorts World Las Vegas, which will be ready by the second quarter of 2021.

Other Newcomers In The Burger Scene

Besides Five Guys, here are some upcoming and recent additions to the growing list of burger joints. 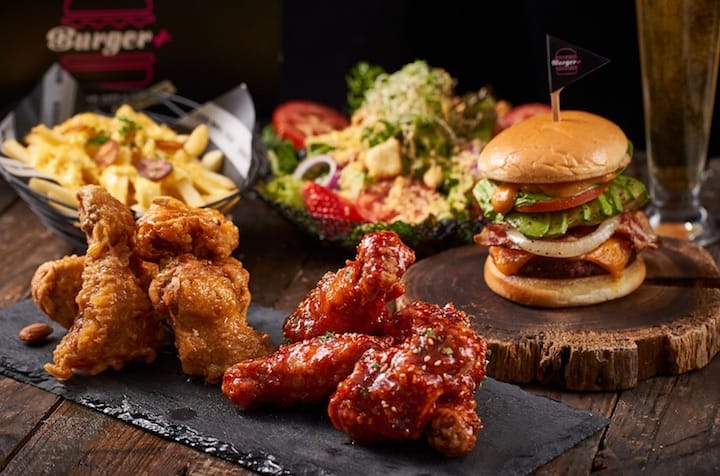 Opening by early July is home-grown burger joint Burger+, which shines the spotlight on Korean flavours. The bistro is run by Daniel Koh and his Korean partner Lee Mihyun, who is a burger enthusiast with more than 10 years of experience of working in international and Korean fast food chains. The menu features 11 burgers and hotdogs including the Bulgogi Burger, which has a US-imported beef patty sizzled in a bulgogi glaze and topped with caramelised onions and mayonnaise, and a Bulgogi Hotdog Bun.

Other burger flavours include the Fish and Avocado and Double Cheeseburger that is topped with a flame-seared slice of cheese. The 77-seat Burger+, which takes over the former premises of Pablo Cheese Tart, will also serve sweet and spicy Yangnyeom fried chicken and Korean craft beers. 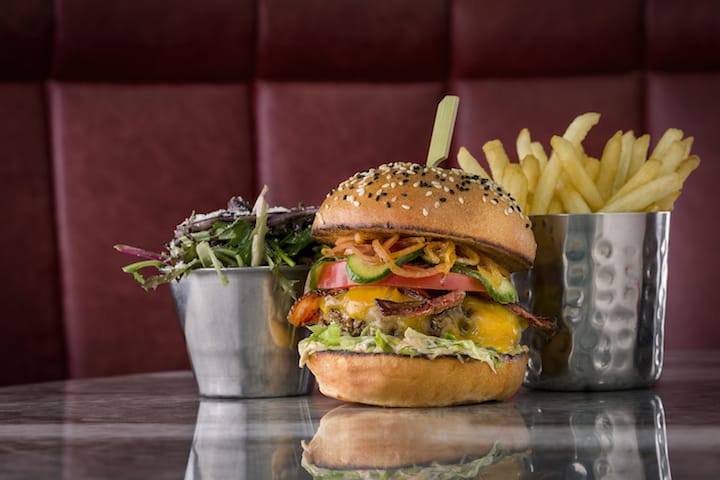 Renowned British restaurant chain Burger & Lobster made its highly-anticipated debut in Singapore last month at Jewel Changi Airport. The restaurant is famed for its Original Roll, which has chunks of lobster meat sandwiched in a toasted buttery brioche roll. Its live lobsters are flown in from Nova Scotia in Canada. There is an exclusive-to-Singapore dish, Sambal Glazed Lobster, which perks the lobster up with spicy dried shrimps and chilli.

If you prefer burgers, dig into its signature burger The Mayfair, which is named after the London neighbourhood, where it started in 2011. The burger comprises a juicy 170g grilled Nebraskan beef patty, house-made pickles, onions and a “secret” B&L sauce. Riding on the plant-based meat movement, there is also a burger made with the Impossible “meat”. The minced soya and beetroot-flavoured patty is cushioned in between pumpkin brioche, avocado, jalapeños and iceberg lettuce. 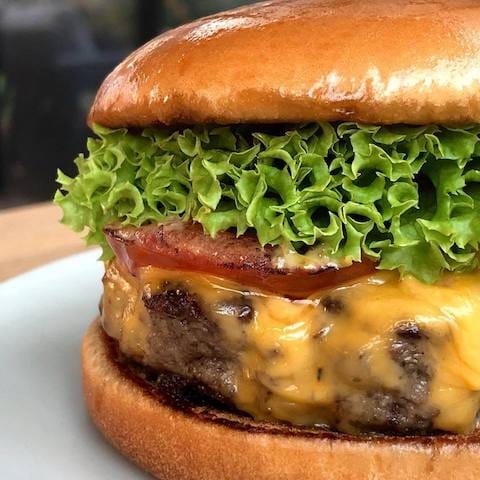 The Basic Burger from BurgerLabo is a blend of four types of meat. (Photo: Burger Labo FB)

Local restaurateur Tan Ken Loon of seafood restaurant The Naked Finn has gone in-depth into burgers. He has transformed its sister Nekkid into BurgerLabo, a burger restaurant that has got every element down pat, from the meticulously-sourced buns that are made with micro-ingredients that help it hold up well and intentional stacking sequence so the patty is the first thing you taste when you bite into it.

The beef patty in The Basic Burger features a 170g blend of four kinds of beef: grass-fed Angus beef neck, Toriyama Umami Wagyu A4 tenderloin, Aomori Gyu ribeye and Sendai Wagyu A5 brisket. The combination makes for a beefy, juicy burger, even when cooked to the recommended doneness of medium-well. Other burgers include a char-grilled chicken burger with garlic yoghurt sauce and “Frenchie” salsa by chef Julien Royer of two-MICHELIN-starred Odette and a vegetarian Almost Burger with a patty made from a blend of plant-based Impossible meat and Omnipork.