After the initial morning bustle of the wet market, Fengshan Market & Food Centre only comes back to life at dusk. Affectionately known to locals as Bedok 85, the sprawling hawker centre draws night owls from far and wide who flock there for a number of famous supper eats. Here, supper-goers tuck into barbecued seafood and fried oyster omelette, then line up for soupy bowls of minced pork noodles from either Xing Ji Rou Cuo Mian or Seng Hiang Bak Chor Mee — each with their own ardent fans, of course.

The line for Shi Wei Da starts at about 4pm, even before stall owner Ng Kim Song is quite ready for business. In the mornings and at lunch, the stall is run by his nephew who sells Teochew muay, or rice porridge with an assortment of side dishes. Come evening, Ng takes over the helm, hawking something different altogether. 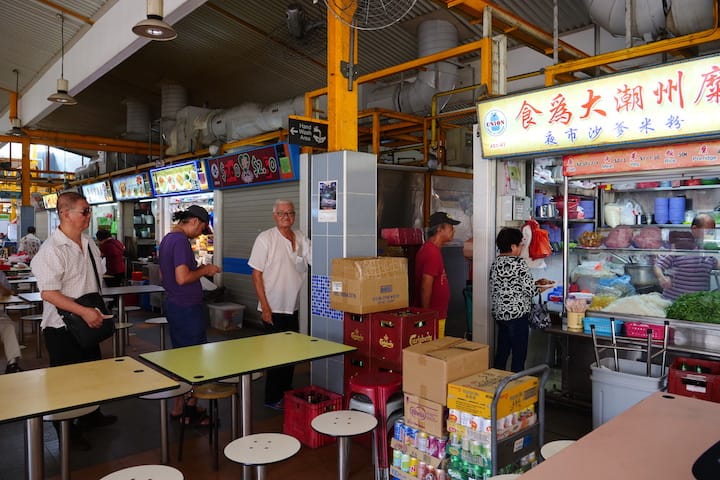 For the last 20 years, Ng has been cooking and perfecting the recipe for just one dish: satay bee hoon. This quintessentially local dish is said to be created by Teochew immigrants who married typically Chinese ingredients like pork liver, cuttlefish and rice vermicelli with the peanut gravy that accompanies Malaysian satay.

Ng says that he learnt the recipe from an old hawker while apprenticing under him. “It was tough work back then without modern conveniences,” he says in Mandarin. “I learnt to do everything by hand.” Today, he still makes every component of the satay bee hoon from scratch even though he is the only cook and manages every aspect of the stall on his own from taking orders to dispensing change. 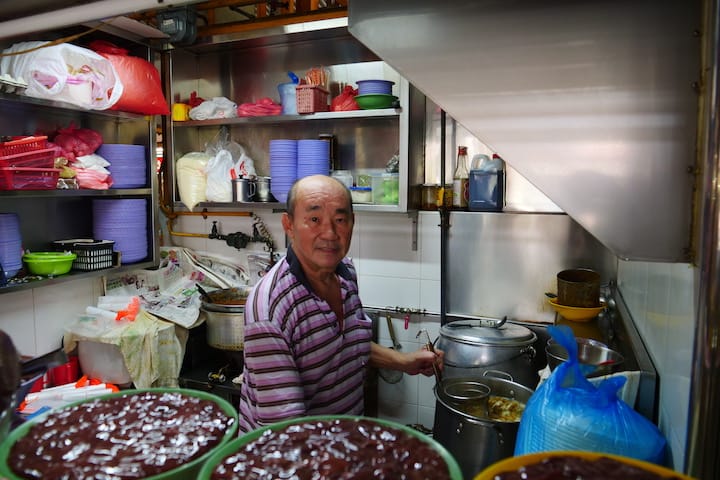 Ng helms the stall on his own and makes satay sauce from scratch (Pic: MICHELIN Guide Digital)
While pre-made satay sauce can be bought easily and cheaply from wholesale satay suppliers, Ng insists on spending his off days labouring over his, roasting peanuts, removing the skins and grinding the nuts before cooking the sauce down slowly with over a dozen other ingredients.

The result is a rich and nutty gravy that ties in all the flavours and textures on the plate. The sauce is sweet, savoury and spicy all at once, clinging on to smooth vermicelli and coating creamy slivers of pork liver as well as being absorbed deep into spongy slices of fried tau pok. It was this dish that caught the Michelin inspectors’ fancy and landed Shi Wei Da a spot in the Bib Gourmand selection of the MICHELIN Guide Singapore 2018. 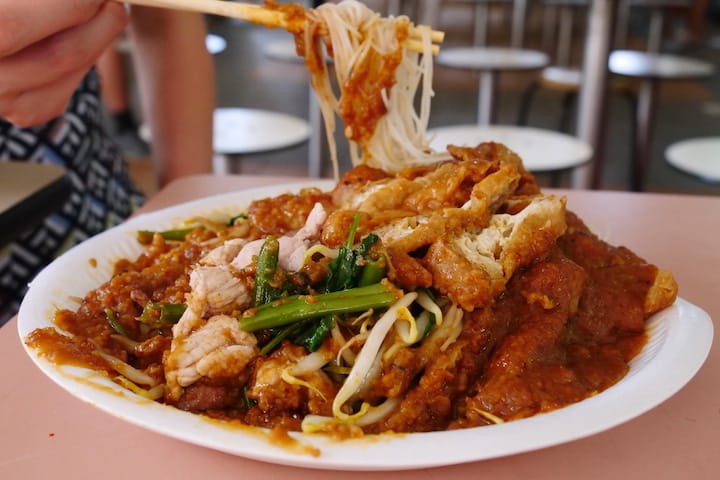 Ng omits cuttlefish from his satay bee hoon to keep his prices low (Pic: MICHELIN Guide Digital)
The Bib Gourmand list recognises restaurants and street food establishments offering quality cuisines at a maximum price of S$45 and Ng’s satay bee hoon comes in way below that cap at $3 a plate. Cuttlefish is the one ingredient that is conspicuously absent in his rendition of satay bee hoon. He’s chosen to omit the relatively expensive seafood ingredient in order to keep his prices low. “I don’t think my food is very good. It’s okay. People just like it because it’s cheap,” he says.