Thirsty for a good drink? We've got you covered in this new monthly round up of the hottest new bars in the city.

Singapore is one of world’s cocktail capitals for good reason: the infusion of global bartending talent and new bars popping up every other week makes it possible to hop from one bar to the next without ever feeling bored - or thirsty.

In that spirit, we’re kicking off our monthly round-up of new bars and clubs. After all, what’s a good meal – Michelin-starred or not – without a good drink? Whether its whisky, gin or infused beers you’re after, here are nine buzzing new bars in Singapore for you to check out this month. 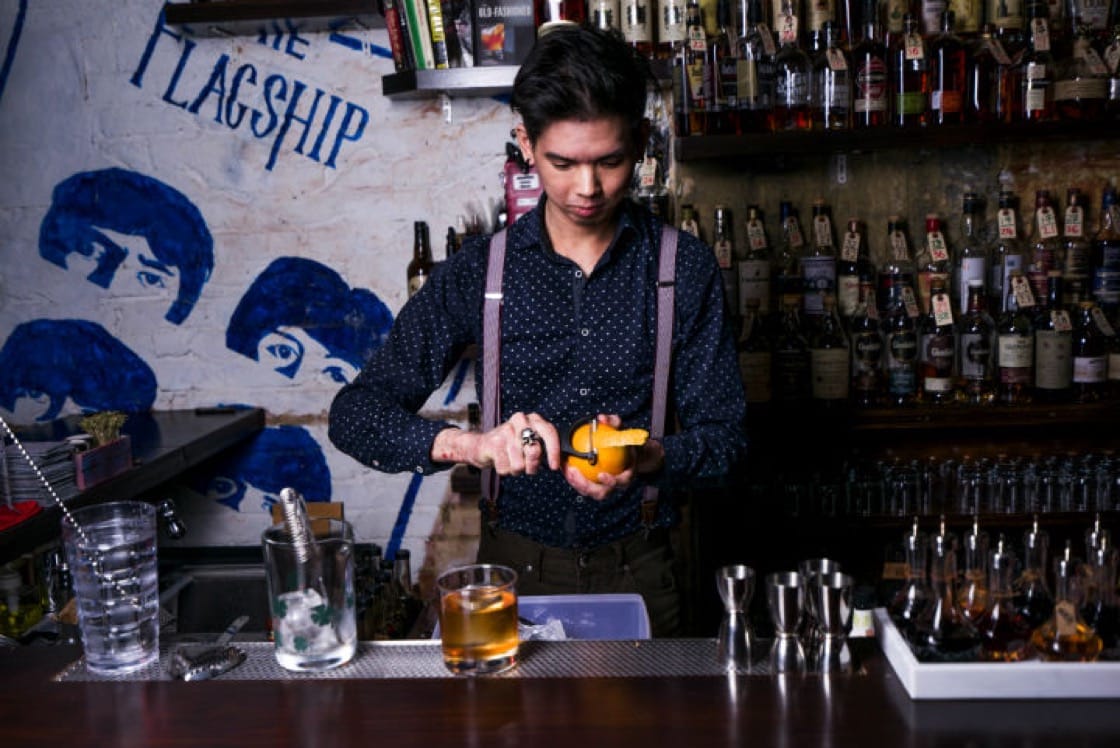 Flagship's head bartender, Jerrold Khoo
Flagship
If you’ve caught the Old Fashioned cocktail revival bug, one-year-old bar Flagship might just be your medicine. That’s because the 30-seater space along Bukit Pasoh has undergone a massive renovation from its former dive bar days and repositioned itself as a specialist on Old Fashioned cocktails and whiskies.

But far from a lengthy (and bewildering) list of Old Fashioned variations, principal bartender Jerrold Khoo has come up with four thoughtful concoctions. The Sherry Cask Old Fashioned is especially noteworthy for blending black sesame-infused syrup with Glendronach 12 Year Old Single Malt Scotch and aged bitters. Those who prefer brighter flavours can order the Apple Tree as apple bitters and cinnamon sugar is mixed with rye whisky. 20 Bukit Pasoh Road.

Cin Cin
Gin has been on the ascent for a while now and Cin Cin, a 75-seater bar at newly opened Oasia Hotel Downtown is one way for you to sample nearly 100 labels from across the world. Savour these spirits neat, or get the bartenders to whip up their cocktails: order the signature Cin Cin cocktail made of grapefruit bitters and Bulldog gin for something refreshing, or get a custom martini made. Simply choose your gin, pair it up with over 11 types of vermouth as well as 14 types of bitters for a drink that you can truly call your own. 100 Peck Seah Street.

Red Tail Bar
The people behind nightlife behemoth Zouk Club has unveiled Red Tail, the first fresh shoots as part of the entire club's upcoming move to Clarke Quay. But the bar is as different as it gets from its 25-year-old mothership on Jiak Kim Street, and prides itself on serving up craft cocktails inspired by nightlife spots around Asia. Think along the lines of Lan Kwai Fong in Hong Kong, Itaewon in Seoul, The Row in Kuala Kumpur and Jalan Legian in Bali.

Order up the Flower Stall, made of pisco, meczcal, crème de violette, maraschino liqueur and lemon, inspired by Lan Kwai Fong’s history of being home to flower vendors. Those in need of a pick-me-up can go for the Cold Brew Lover – made of dark rum, honey water, orange bitters and cold brew coffee, inspired by KL’s The Row, which is home to an abundance of cafes. #01-04, Block 3C, River Valley Road

(Related: 5 delicious things you may not know about rum) 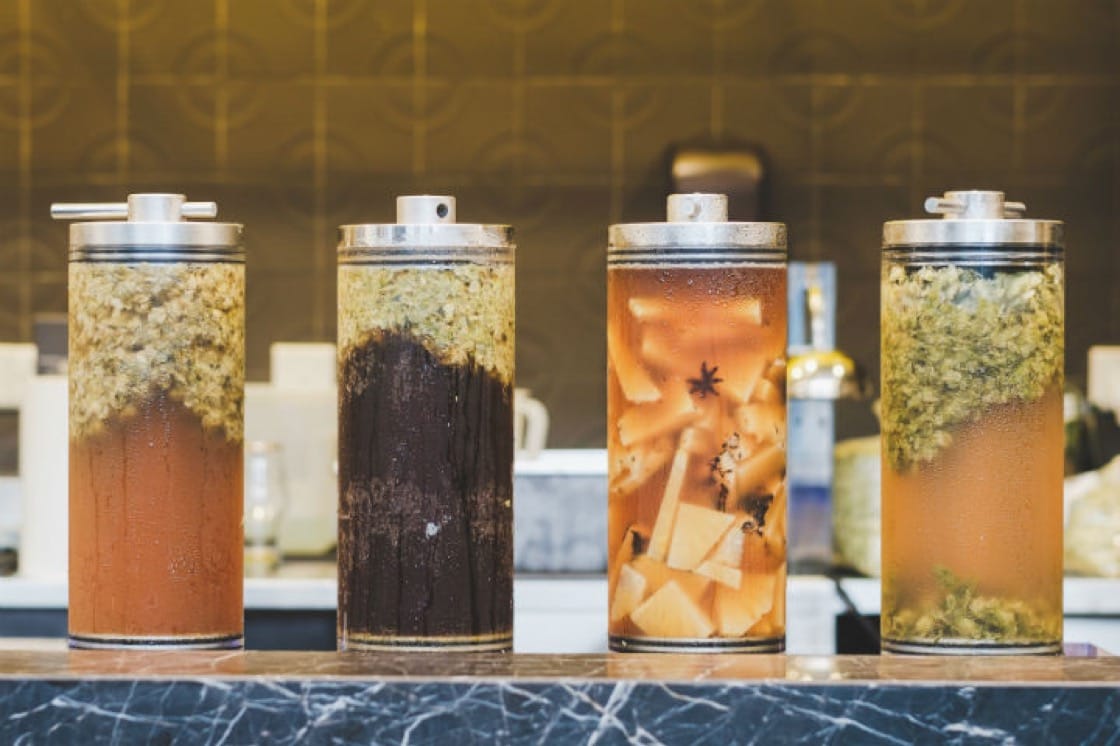 The Infusion Towers At The Alchemist Beer Lab

The Alchemist Bar
Those who claim not to like the taste of beer might want to do a rethink thanks to The Alchemist Bar. It claims to be Asia’s first infusion beer lab and boasts 16 towers where beers are infused with botanicals, fruits and spices – even coffee and chocolate.

The process works by first placing the ingredients into the fusion chamber before releasing compressed gas and then adding the beer. Barflies can expect whimsical takes on draft beers from sister outfit The Little Island Brewing Co, such as the Obama, which is made of stout infused with marshmallows, vanilla pods and mint leas, as well as the Ugly Sister Golden which sees ale infused with grilled pineapples and star anise. #B1-16 South Beach Avenue, 26 Beach Road.

Bourbon Street
Whiskey has been seeing a resurgence so it’s no surprise that its American rendition, which is primarily made of corn, is finally getting it’s time in the sun. Bourbon Street on Club Street not only showcases the spirit but also pairs it with soulful Louisiana Cuisine. House specials include The Big Old Fashioned as well as The Mint Julep, and if you find yourself a little peckish, there’s always the Chicken & Waffles to keep you satiated. 46 Club Street.

Skyline Club & Lounge
Just as we thought the age of rooftop watering holes have come and gone, Skyline Club & Lounge, the newest kid on the (really high) block proves us wrong. What’s more, it’s a 4,000 square foot space that includes a hopping indoor club and outdoor patio at the Singapore Land Tower, plus a cavernous 7m high ceiling. This means you’re well-protected from the weather, especially if it rains. There’s also a happy hour from 5 to 10pm daily, when Moet & Chandon champagnes go for $108, Belvedere vodka for $148 and Macallan whisky for $190 – one more reason to knock off early and head home late. Level 45 Singapore Land Tower.

(Related: 5 things you need to know about barrel aging) 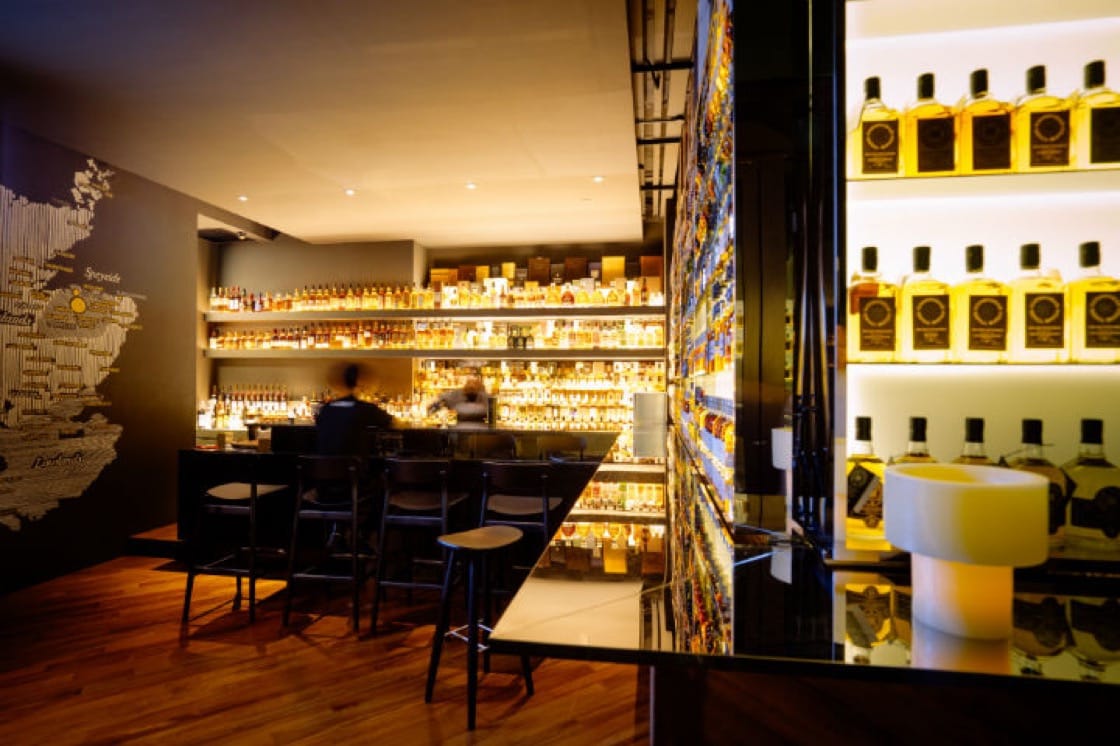 The interiors of Quaich Bar
Quaich Bar
Whisky bars are popular these days – so popular in fact that one of Singapore’s first whisky specialists has opened a second outlet. Quaich Bar has raised its shutters at South Beach Avenue, boasting sexy interiors by award-winning Spanish design studio Lagranja.

Tipple-wise, connoisseurs of the amber dram are in for a real treat as the bar stocks up over 500 types of whisky labels including the rare Springbank 16 Year Old Local Barley and the boutique-produced Kilkerran Calvados Single Cask. If whisky appreciation is new to you, fret not as the bar has a whisky tasting set where beginners are guided through five types of whiskies. #01-16, 30 Beach Road.

The Other Room
It seems like there’s always room for one more Prohibition era-style bar as The Other Room (pictured in banner above) is the latest addition to the genre. Mixologist Dario Knox, who also oversees FOC restaurant’s beverage programme, runs the show here. He has over 30 tipple types in store, each one cask-finished in different spirits and cocktails pay tribute to classic potions of yesteryear. Think along the lines of The Southern New York Sour of black tea with oak smoke meant to revoke 1880s Chicago and the King of Persia, a recipe said to originate in Persia but first written in 1787. #01-05 Singapore Marriott Tang Plaza Hotel.

Highball Singapore
While most Japanese-influenced bars here serve drinks in a highball glass (tall glasses which can contain the equivalent of two cocktails), none have thus far focused solely on it like the people behind Highball Singapore have. The bar at heritage cluster Kampong Bahru is started by Kino Soh, the local bartender who was the Diageo World Class Finalist of 2016. Keep an eye out for the Matcha bingsu, in which the Korean shaved iced dessert is given an alcoholic spin with dark rum, green tea ice cream, shoyu black malt beer and served with toasted marshmallows. #01-01, 79 Kampong Bahru.

Belvedere is dispelling the notion of vodka as a flavourless spirit with its Single Estate Rye series showcasing Poland’s lush terroir.