It might be hard to find another dish as polarising as aspic. If the thought of eating cold meat and vegetables encased in a wobbly meat-flavoured jelly elicits shudders, you’re probably thinking of the Jell-O salads that graced dining tables across America in the 1950s and 1960s, made primarily with canned goods, leftovers and commercial gelatine powder.

A good, classic aspic should, in the words of famous French chef and author Auguste Escoffier, be “at once succulent, limpid and just sufficiently viscous to allow of it being turned out of a mould without breaking”. 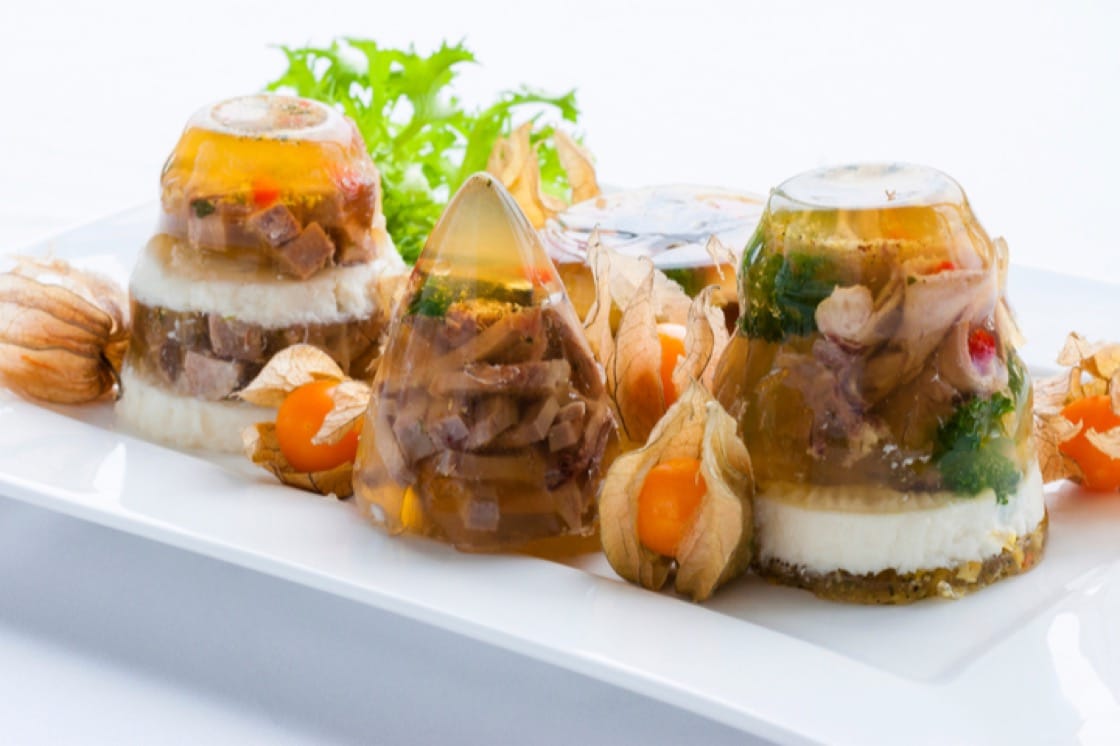 Aspics are ingredients suspended in jelly made from meat collagen (Pic: Shutterstock)
How Aspic Is Made

Making proper aspic is laborious and time-consuming, but not complex. Essentially, gelatine is extracted by slowly simmering animal parts like collagen-rich skin or bones with plenty of cartilage or tendon. The velvety, thick stock that is derived after several hours is rich in collagen and the microscopic proteins within it become entwined, forming a mesh that solidifies when cooled.
Advertisement
Advertisement 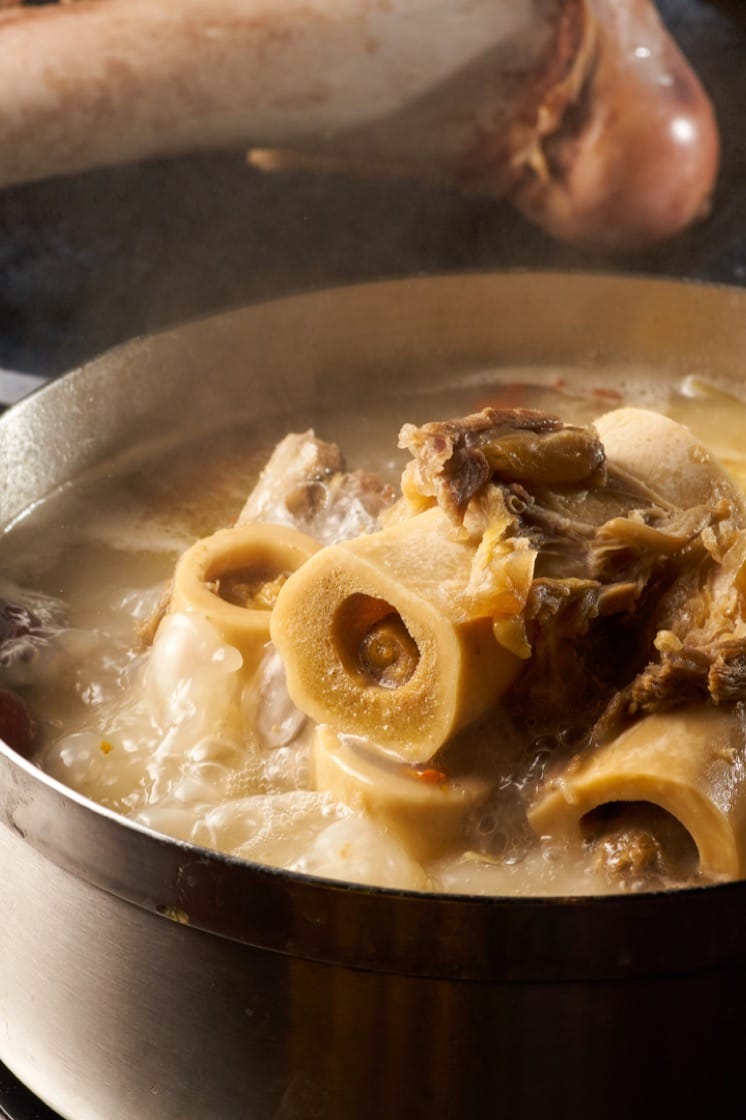 The egg white will start to form a crust on the surface that traps all the impurities that make the liquid cloudy. The crust can then carefully be strained off after about 10 mins and the clarified stock poured into a mould with layers of ingredients. Once cooled, the stock solidifies into a gelatinous aspic.

The earliest detailed recipe for aspic is found in Le Viandier, a collection of haute cuisine recipes produced in the 1300s. Cooks in the Middle Ages had discovered that thickened meat broth cooled into a jelly and the gelatine kept out air and bacteria, preserving the cooked meat inside for longer periods of time.

In the 19th century, legendary French chef Marie-Antoine Carême perfected the art of aspic-making and his elaborate, quivering creations were an integral part of the royal cuisine that he presented in Napoleon’s imperial court. He was the one who coined the term chaud-froid, which is French for “hot-cold”, used to describe his architectural showpieces that were first cooked, then served cold — think truffles and poultry suspended in jelly and aspics of cocks’ combs and stones or red calf’s tongue and sweetbreads. 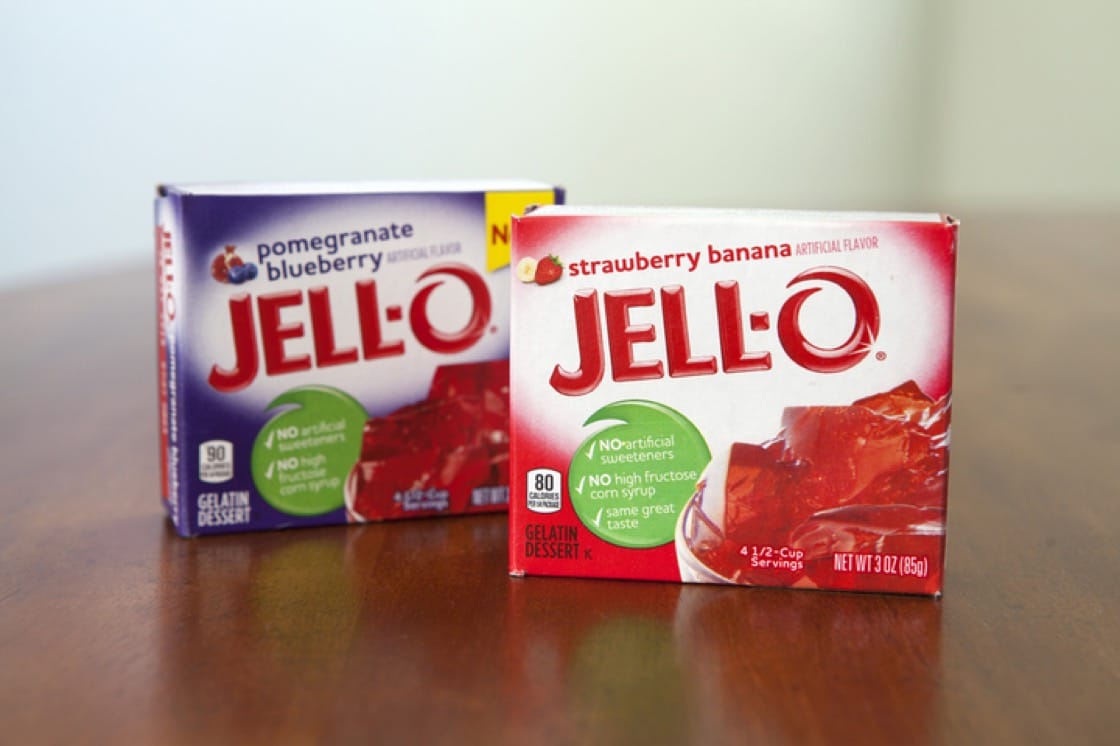 Commerical gelatine powders replaced the need for boiling down meat (Pic: Shutterstock)
But the advent of commercial powdered gelatin towards the end of the century eliminated the need to boil down animal parts for hours and the traditional method of making aspics soon disappeared. Jell-O took the United States by storm, aided by the proliferation of refrigerators in homes, and by the 1950s, meat aspics and Jell-O salads became a mainstay of dinner tables across the country.

While the golden age of aspics in America has long come to an end by the early 1960s, aspics remain a part of many food cultures all over the world. In Russia and Eastern Europe, vodka drinking is incomplete without kholodets, a delicacy made with pork feet, tail or ears and eaten with horseradish or mustard. Danish open-faced sandwiches are sometimes topped with cold cuts suspended in sky, an aspic made of meat juices and gelatin. In Nepal, buffalo is the protein of choice for ta kha, a popular winter dish among the Newars of Kathmandu Valley. 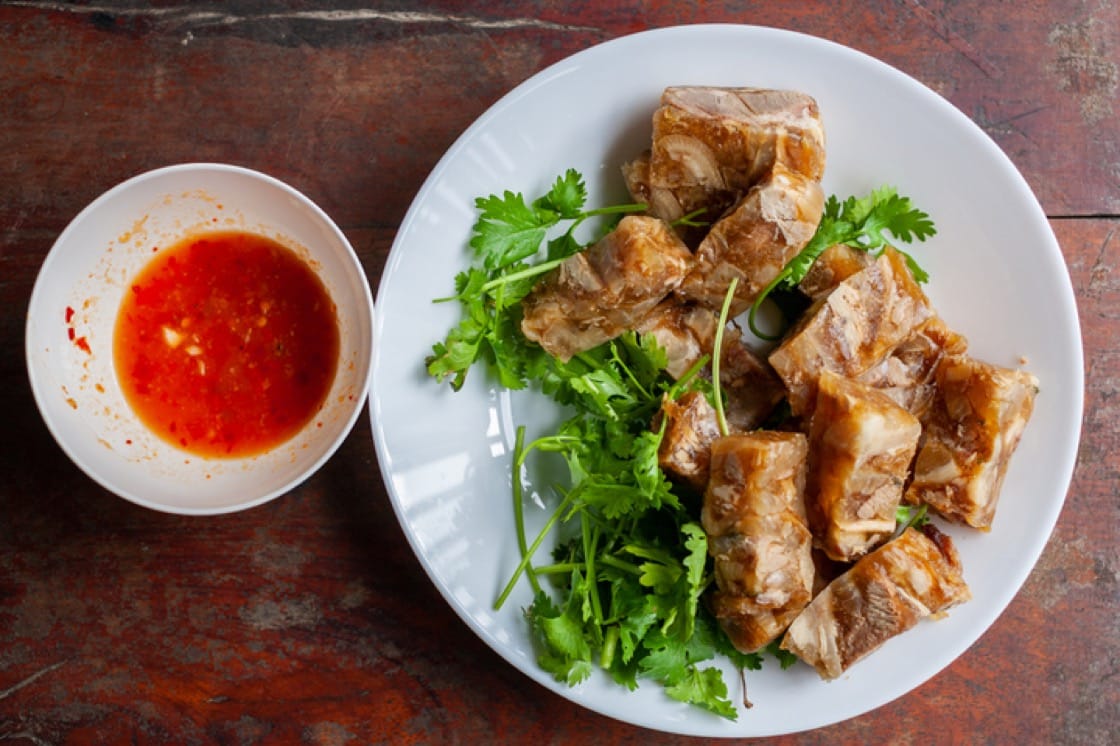 Teochew pork trotter jelly (Pic: Shutterstock)
Closer to home, jokpyeon is a traditional Korean dish that is made by boiling finely chopped cow’s trotters and allowing the stock to cool and set with beef or pheasant meat and garnishes of egg and chilli within. Kaeng kradang is a Thai curry aspic that is a specialty of northern Thailand, while pork trotter jelly is a classic component of Chinese Teochew cuisine which is eaten with a tangy chilli sauce of ginger and vinegar. More unusually, shark meat is also made into an aspic in traditional Teochew cuisine, the lean white meat encased in a translucent jelly made from boiling collagen-rich shark skin.

RECOMMENDED READING: 6 Restaurants For Authentic Teochew Fare
These speak to the endless variations of aspic, an evergreen cooking technique that has stuck around through the centuries. With the rise in to nose-to-tail culinary trend, it may be the perfect time to set aside your preconceived notions about jiggly, savoury meat jellies and tuck into some aspic.
Advertisement
Advertisement

Video: A Taste For Generations

At Paste in Bangkok, Bee Satongun puts “death and life” on her plates to bring a forgotten taste of historical Thailand to a new generation.