It’s one of those dishes that look deceptively simple at restaurants — a fillet of fish, maybe cod or snapper, with succulent snowy flesh that flakes apart with the twist of the fork and the piece de resistance: perfectly crisped skin.

But as any home cook can tell you, cooking fish can quickly go awry without proper preparation and technique. Soggy skin, sad pieces stuck stubbornly to the pan and overcooked or undercooked flesh are all common mistakes that happen when pan-frying fish.

Luckily, these are mistakes that can be easily avoided with a few simple tricks and techniques observed by professional chefs. 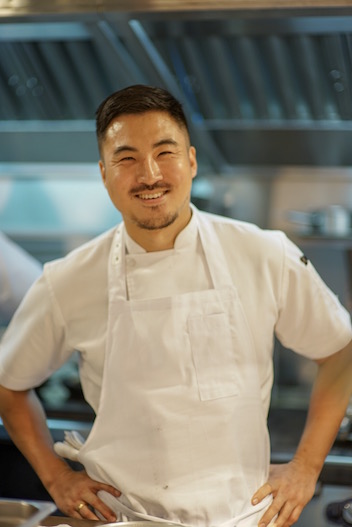 On the summer menu at one-MICHELIN-starred Meta in Singapore, chef-owner Sun Kim dishes out a paragon of crispy-skinned fish. Resting on a creamy cloud of yuzu sabayon is a hunk of flaky white Japanese kinmedai, or golden eye snapper, with its skin and scales all golden brown and crisped up. “It is one of the best fish for the summer season, when the texture of the fish is extremely soft and meaty,” says the chef. “It is one of my favourite fish to eat.”

Kim grew up in the coastal city of Busan in South Korea, which is known for its abundance of fresh seafood, being home to Jagalchi Fish Market, the nation’s largest seafood market. “Growing up as a kid, my mother would always cook fish with a crispy skin for me and my brother with a soy dipping sauce,” he reminisces, listing different types of fish that take well to pan-frying such as snapper, cod, grouper and amadai (red tilefish).

The number one enemy of crispy skin on fish is moisture. In order to achieve a good sear on the skin and prevent it from sticking to the pan, you need to get rid of any excess moisture on the surface of the skin by patting it dry with paper towels.

A fillet of fresh fish tastes best when simply seasoned and thus doesn’t require a marinade. “A little bit of flour brushed on the skin helps it crisp up, but a marinade would actually make the fish too wet to crisp up,” explains Kim. Seasoning the fish with salt and pepper just before it hits the pan, rather than letting it sit in the seasoning, is also crucial because salt draws out the moisture from the flesh, making it too wet again and harder to get crispy. 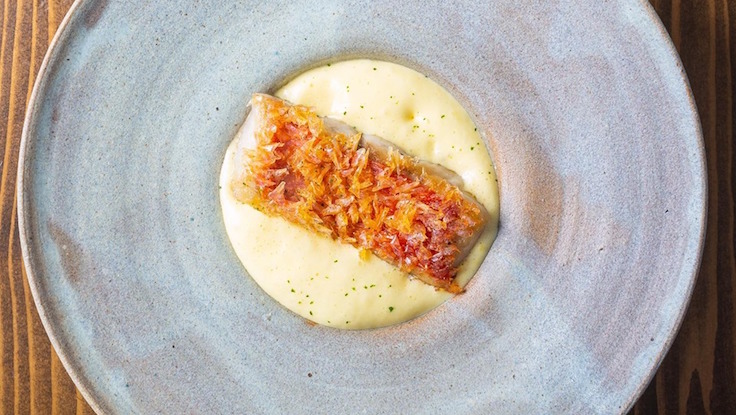 Meta's kinmedai with crisped up skin and scales (Pic: Meta)
Another way to keep the moisture level in check is to make sure the pan is heated up to a high temperature and the oil inside is hot enough as well. You might be tempted to use a non-stick pan to avoid tearing off the skin, but the chef advises against it. “I use a stainless-steel pan, as a non-stick pan does not maintain heat well.” A cast iron skillet should do the trick nicely as well.

When the pan and oil in it are extremely hot — you’ll know when the oil starts to shimmer and smoke — put the fish in skin-side down and wait. At this point, being patient is key as trying to flip the fish too soon will surely result in torn skin. 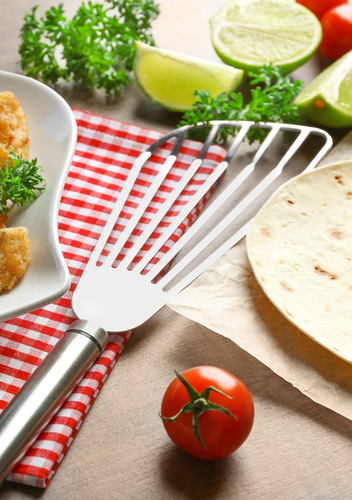 Tools Of The Technique

Other than a stainless-steel pan or a cast iron skillet, the one other piece of kitchen equipment that comes in handy in frying fish is a fish spatula. “When cooking fish, you have to be gentle, so the fish spatula helps with that,” says Kim.

A fish spatula is a flat metal flipper with longer, more widely spaced slots cut into it. The thin, blade-like edge helps the spatula slide gently underneath a delicate fish fillet, while its large, flat surface area can be used to press the fillet down so the skin makes full and even contact with the pan. The chef explains that using a fish spatula helps keep the fish flat when cooking and prevents it from curling up.

When the skin is sufficiently browned and crisp, it will release itself from the pan and you’ll feel no resistance when you slide the fish spatula under the fish to give it a flip.

“When the skin is a nice golden brown colour, I cover the pan with the lid, and let the fish rest on a medium heat for two minutes or finish it off in the oven for two minutes,” says Kim. This might result in fish that appears underdone, but the chef assures us that the residual heat will bring the flesh to the right doneness with some rest.

“The most common mistake that chefs make when cooking fish is that they cook the fish till it’s perfectly cooked, but the fish is still hot so it’s still cooking even when it’s taken off the stove and the fish turns out overcooked,” he explains. “The best tip is to undercook the fish a little first and then let the fish rest so the texture and taste of the fish will be just right.”
RECOMMENDED VIEWING: Braving The Kitchen With Chef Sun Kim of Meta (Video)
Advertisement
Advertisement

Cantonese Chinese New Year Singapore
All articles of Dining In