Peranakan cuisine is notoriously elaborate — just look at the Straits Chinese tradition of throwing lavish feasts known as tok panjang, which comprises dishes that sprawl across a long table to celebrate special occasions.

Prominent Peranakan chef Philip Chia, who is also a food consultant and cookbook author, has an unorthodox perspective on keeping Peranakan cuisine alive. Instead of toiling over the fire for hours to simmer soups and stews and braise meat in a multi-course meal, Chia suggests serving Peranakan dishes as bite-sized canapés.

The veteran chef, who is also the head consultant for the recent China-produced remake of The Little Nyonya television series, has published a cookbook, Party-Perfect Peranakan Bites, which presents Peranakan dishes as small plates and light bites. 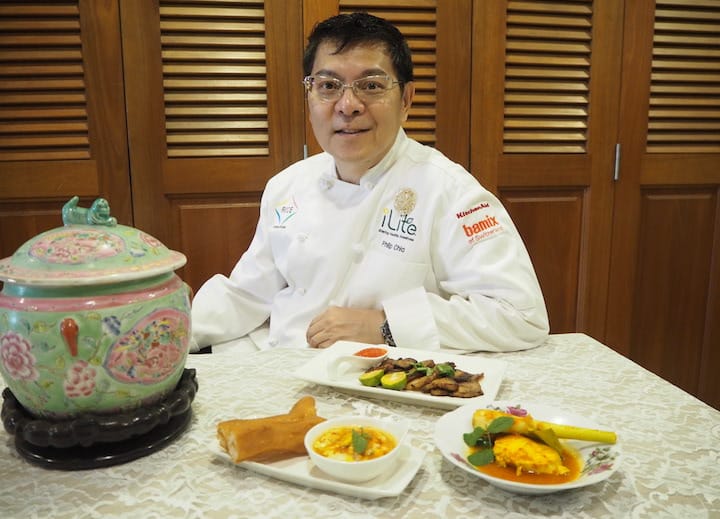 One of the quintessential Peranakan dishes is ikan assam pedas, or fish in spicy tamarind gravy. For this recipe, Chia has transformed the classic into a canapé. Instead of serving the fish in thick slabs, he fillets and flakes the fish into smaller pieces and cooks them in rempah, a spice paste that is concocted with chillies, galangal, lemongrass and belachan (shrimp paste).

To heighten the aroma of the dish, he crushes a stalk of lemongrass to release its oils into the gravy. Chia also incorporates his family’s practice of having assam pedas with fried dough fritters (or youtiao in Chinese) into this canapé. A generous dollop of flaked assam pedas perches on the crunchy fritter, which serves as a good base to soak up the sweet and sour flavours from the tilapia fish.

Other recipes in the book include buah keluak, a stewed Indonesian black nut, that is topped with fish roe and otak otak, which is presented in bite-sized cubes garnished with kaffir lime and turmeric leaves.

On thinking up of new ways to modernise Peranakan food, Chia says: “To keep our food culture alive, we need to innovate and catch up with the younger generation, or else the culture will die off. We need to get people to continue cooking and eating Peranakan food.”

RELATED: What is... Rempah? 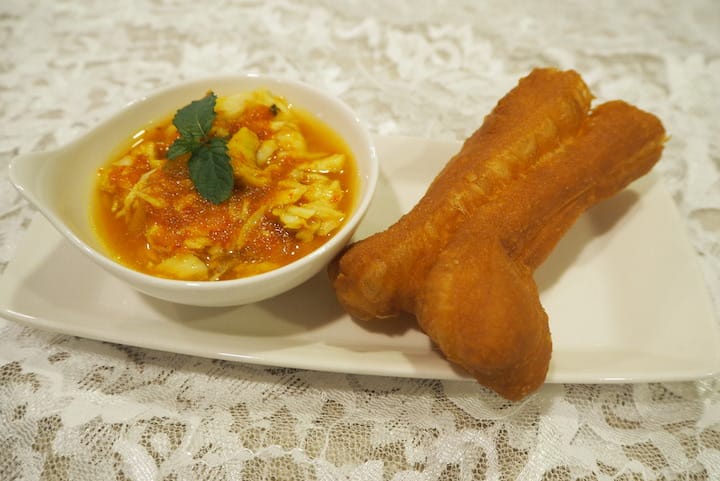 The sweet and sour flavours of the assam pedas are soaked up by the dough fritters. (Photo: Kenneth Goh)
Recipe: Ikan Assam Pedas With Dough Fritters
Serves 8

Method:
1. Prepare rempah by using a mortar and pestle or a food processor. Grind the rempah ingredients into a paste.
2. In a cooking pot filled with water, bring rempah, lemongrass, turmeric leaf and tamarind juice to a boil over high heat. Switch to low heat and simmer the mixture for 10 to 15 minutes.
3. Gently place tilapia fillet into the pot and simmer for five minutes until the fish is cooked. Remove sliced tilapia fillet. Using a fork, shred the tilapia fillet.
4. Add sugar and salt to taste. Drizzle oil over the mixture and turn the heat off.
5. Place the shredded tilapia in a small bowl and spoon gravy over the fish. Serve with fried dough fritters and garnish with sweet basil leaves. Serve.

READ ALSO: Peranakan Cuisine: 5 Dishes You Have to Try

Recipe social media Chefs and the Community
Dining In 2 minutes