Kombucha may be trending now, but it is certainly not new. Its roots can be traced to China around 220 BC, where it was prized for its healing properties. The tea made its way to Europe in the early 20th century and is known by various names in different countries — kambucha in Russia, kombuchaschwamm in Germany.

Now found in hipster cafes and gourmet supermarkets everywhere, this fizzy, fermented tea is popular as a health drink and as a delicious alternative to processed soda. But why shell out $5 for a bottle when you can make kombucha at home for a fraction of the cost? 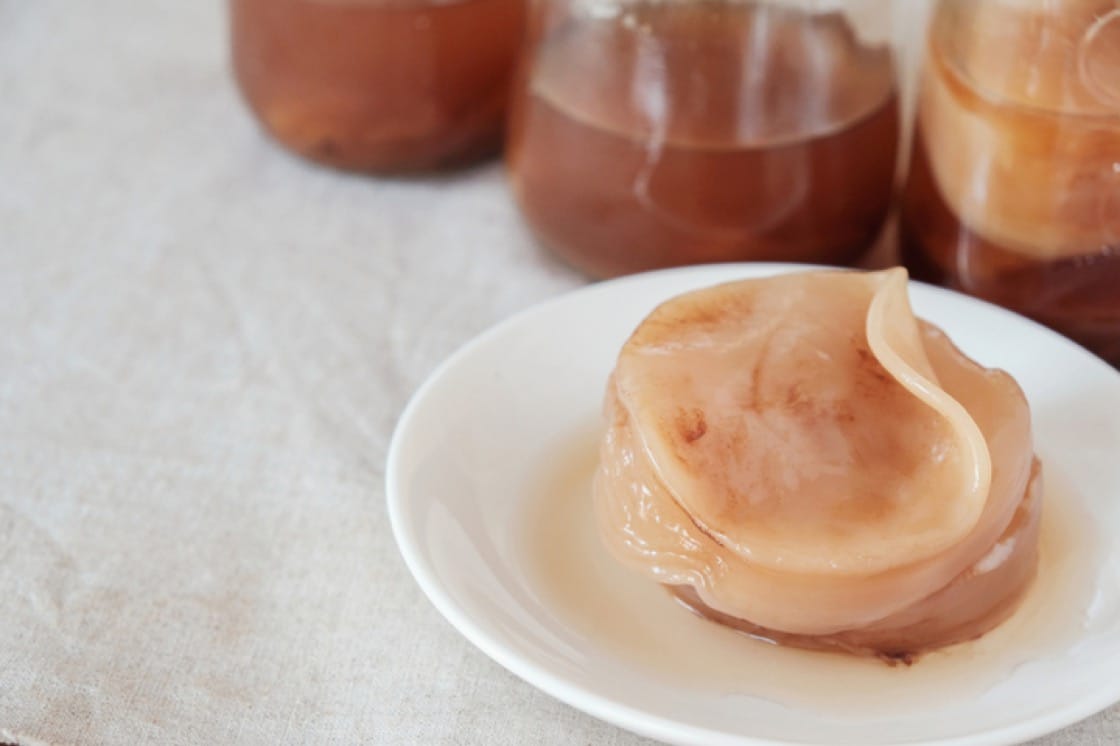 As the fermentation process occurs, more Scoby grows on the surface of the tea, so to start, you can obtain one from a fellow home brewer or purchase one from health food stores in Singapore like Bushwick.

Health Benefits Of Kombucha
Studies conducted suggest that although the purported health benefits of kombucha are occasionally exaggerated by the media and anecdotal human studies, kombucha’s tea base and fermentation process imparts to the beverage similar benefits as plain tea and fermented foods. These include probiotics that encourage gut bacteria diversity and aid digestion, as well as antioxidant properties. 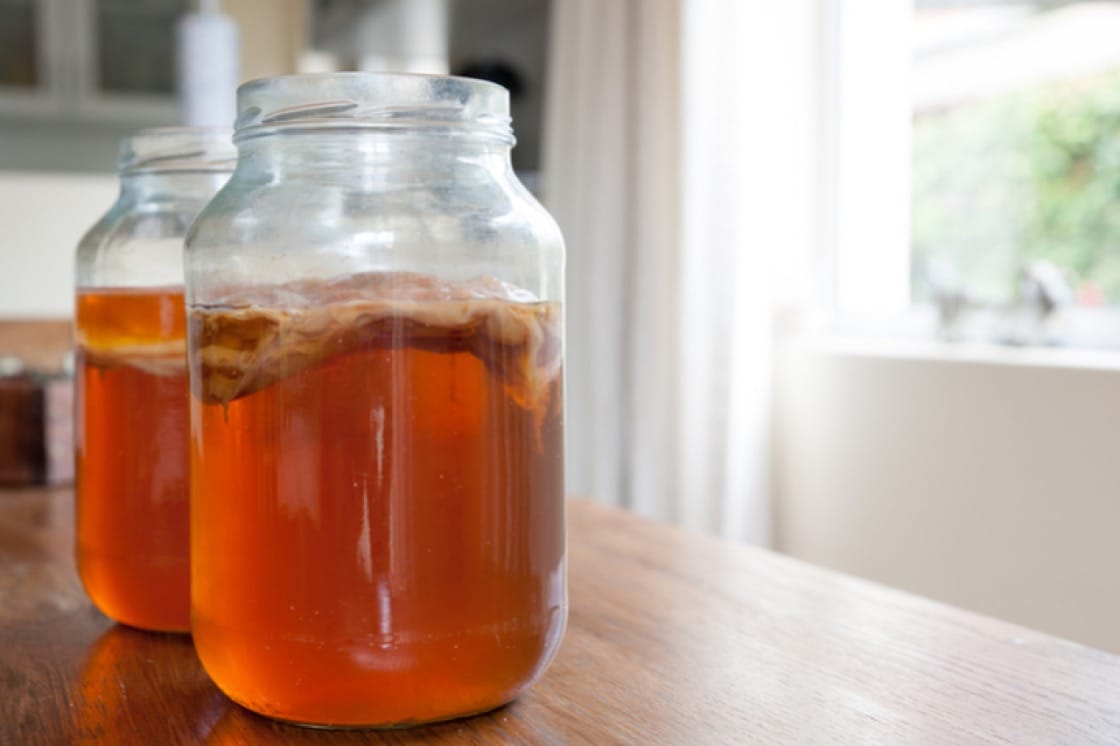 The first fermentation stage happens in a wide-mouthed glass jar covered with cloth to allow air-flow (Pic: ShutterStock)
Homemade kombucha is a delicious, healthier alternative to soda and a much more affordable option to buying commercial brews. Don’t let the idea of a living, alien-like Scoby intimidate you. The process is easy and fun once you get the hang of it — just set up the mix and let time and the Scoby do all the work.

Method
1. Brew 1 litre of tea with sugar and let it cool to room temperature. High temperatures will kill the Scoby.
2. Sterilise the wide-mouth glass jar by boiling it in hot water for 10 minutes.
3. Pour the cooled tea into the wide-mouth glass jar and add the Scoby and starter tea.
4. Cover the mouth of the jar with cloth or paper towels and secure with rubber band. Store on kitchen countertop with good air-flow, away from direct sunlight, ideally between 21 to 29°C.
5. After 3-5 days, a baby Scoby will start to form on the surface of the kombucha. Taste-test the kombucha by drawing out some liquid with a straw and finger. The longer the kombucha ferments, the less sweet and more acidic it will be.
6. After 7-9 days, or once the kombucha reaches your preferred acidity, strain out the kombucha into bottles, reserving the Scoby and a cup of the mature kombucha for the next batch. Start a second batch from Step 1.
7. The bottled kombucha can be refrigerated and consumed immediately. At this stage, the kombucha will not be effervescent. To induce carbonation and add flavourings, proceed to second fermentation. 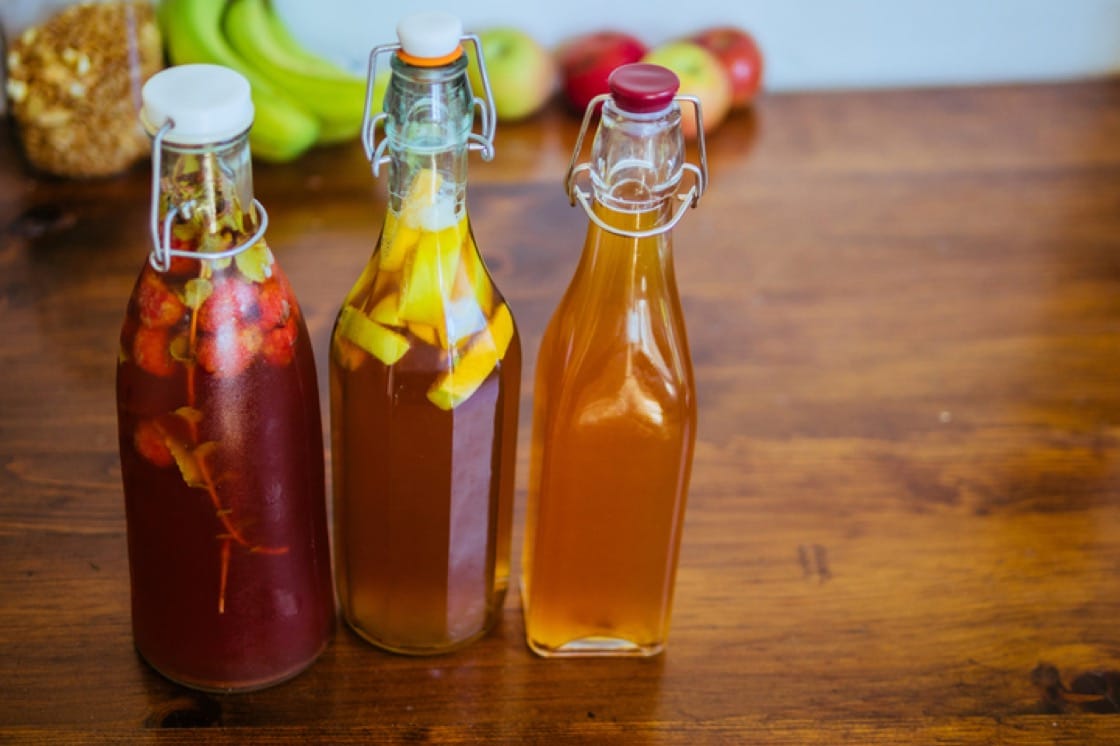 These air-tight flip-top glass bottles are ideal for second fermentation when carbonation is formed (Pic: ShutterStock)
Second Fermentation
1. Strain the matured kombucha through a coffee filter to remove dead yeast strands.
2. Fill an air-tight bottle with the filtered kombucha and any optional flavourings, leaving about 2.5cm of air space on top.
3. Close the bottle tightly and let it continue to ferment on the kitchen counter until it reaches the level of carbonation you desire. This could take 3 to 7 days. Check the level of carbonation carefully over the sink each day and be careful of explosions, or use a soft plastic bottle till you are more familiar with how fast carbonation occurs.
4. Refrigerating the carbonated kombucha stops further fermentation and the fizzy kombucha is now ready for consumption. 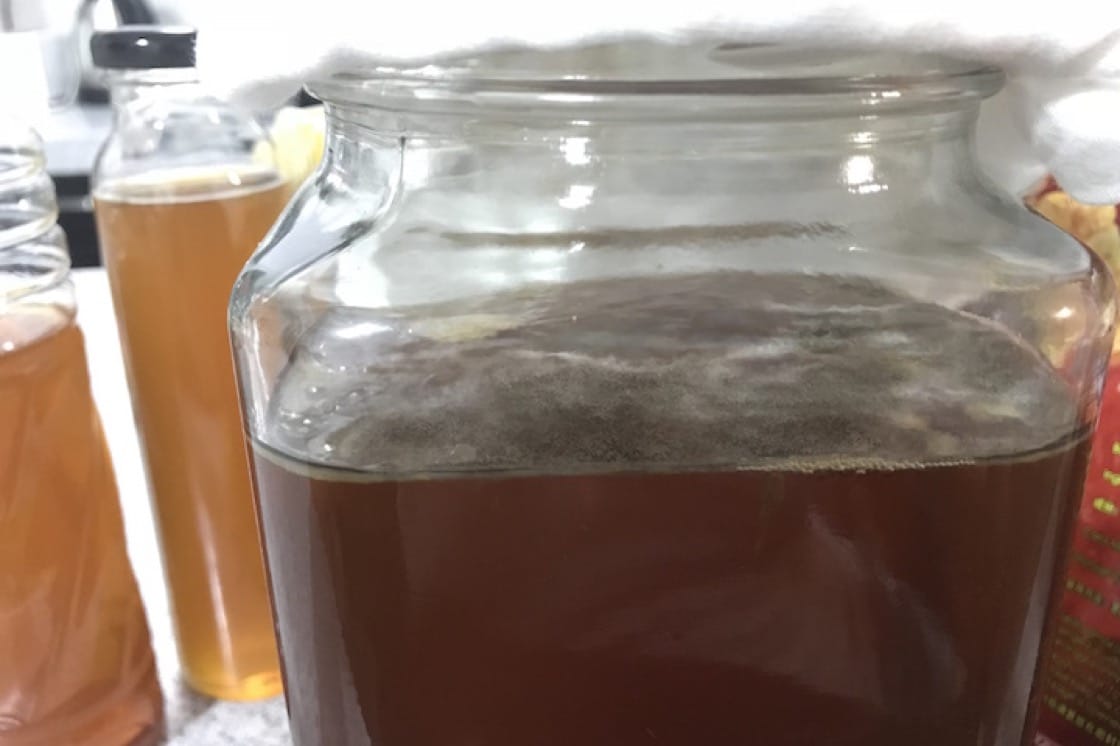 Mould has formed on the baby Scoby on the surface of the kombucha (Pic: MICHELIN Guide Digital)

Recipe Notes:
- A Scoby is a living home for active yeast and bacteria and can be killed by extreme temperatures, so never pour hot tea on it or store it in the fridge.

- To prevent mould and undesirable microorganisms from growing, look out for three things: Always wash your hands with soap and sterilise your jars before coming into contact with the Scoby. Keep an acidic environment by making sure to use enough starter tea when you brew a new batch of kombucha (at least 1:5 ratio of starter to fresh sweet tea). Only use white cane sugar and black or green tea to maintain low pH levels (flavoured teas contain oils encourage mould).

- Mould can be distinguished from healthy Scoby by its colour and texture — healthy Scoby can have white or brown moist-looking spots, while mould is often green, black or blue and have a furry or fuzzy texture. Throw the brew and Scoby away and start over with fresh Scoby.

Recipe cocktail Christmas
All articles of Dining In