Always had a burning question but not sure who to ask? In our regular Ask The Expert section, we do all the noseying so you don’t have to. In this edition, tea master Yang Yan Qi of Tian Fu Tea Room showcases the tools and techniques used in gong fu cha, a traditional Chinese tea ceremony and makes it approachable for everyone.
Chinese tea culture dates back more than 3,000 years, flourishing in the Tang Dynasty when it was seen as a reflection of nobility, education and refinement. Gong fu cha is a traditional Chinese tea ceremony that involves the ritualised preparation and presentation of tea — a practised technique employed by connoisseurs to truly appreciate the nuances of a fine tea. 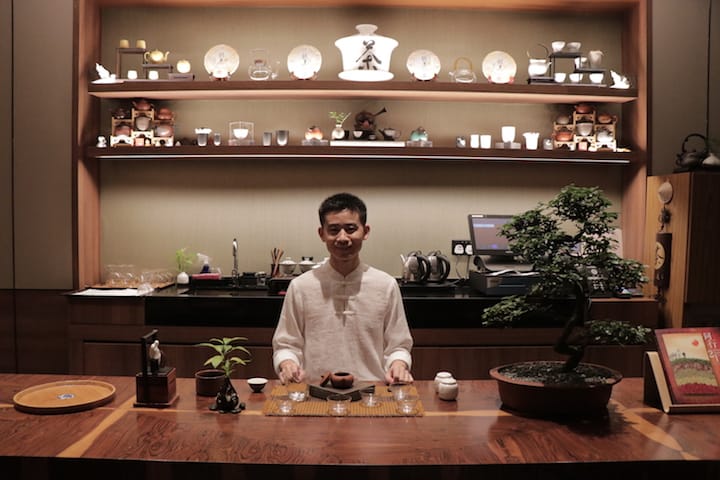 Tea master Yang Yan Qi at Tian Fu Tea Room (Pic: MICHELIN Guide Digital)
Born in Sichuan, China, Yang has dedicated much of his life to the art of Chinese tea culture. Growing up, tea was a way of life and something he learnt to appreciate as a child. “I grew up around tea. My family and neighbours often got together to have tea. Whenever we have tea, it’s not just about having a drink, but about creating a space, an atmosphere to relax and still the mind.”

He spent two and a half years at Sichuan province’s esteemed Mengshan tea estate to master the art of gong fu cha, steeping himself in tea culture which involved the study of Chinese history, health benefits and brewing techniques.

While gong fu cha originates from the Chaoshan area in Guangdong, Sichuan is known for its long-spouted copper kettle tea ritual that combines tea pouring with spectacular martial arts moves. “My shifu made us practise various martial arts like wushu and taiji before we even got to touch the long spout teapot,” says Yang.

Watch this video to see him demonstrate the long-spout tea pouring technique: 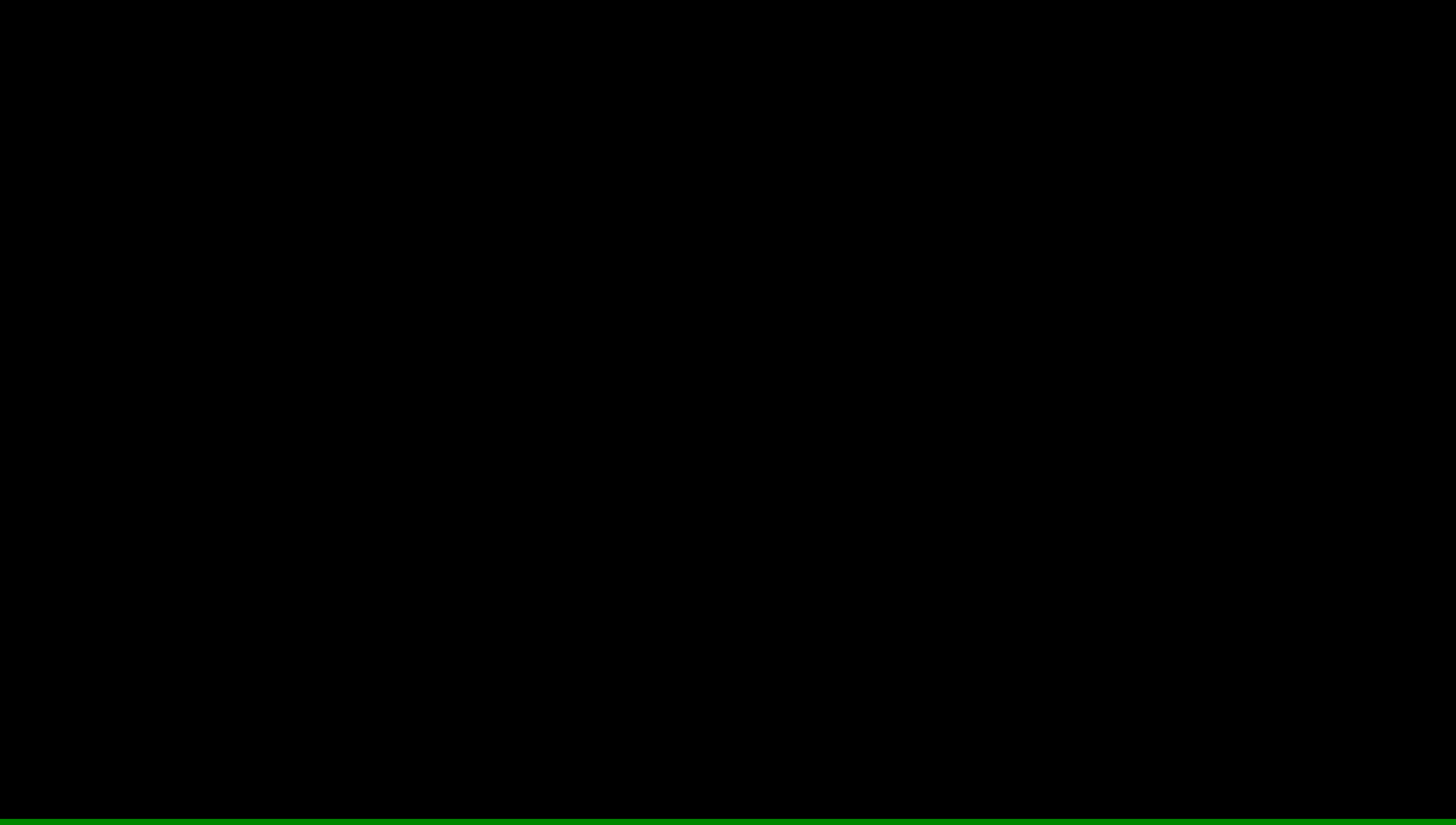 Although gong fu cha takes years of acquiring knowledge and practice to master, Yang believes that it is something that everyone can participate in and learn to appreciate. “Up to a certain point, gong fu cha is a science, then the rest is art and personal experience, and up to the tea brewer’s preference.

Dear Yan Qi,
I would like to have some good Chinese tea to pair with my mooncakes as we admire the full moon during the Mid-Autumn Festival this month. What tools and techniques do I need for a simple but traditional gong fu cha ceremony?

Gong fu cha is as much a science as it is an art. It’s about creating an atmosphere where one can relax and enjoy the ritual of tea drinking. We paint a picture at the tea table with beautiful tea ware and music, as well as other decorative elements like a vase, a bonsai or even smooth pebbles. 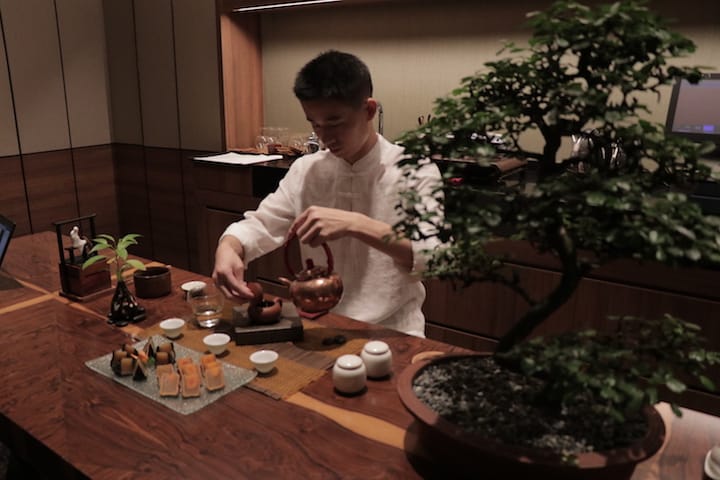 Music and decorative items like a vase or bonsai set the stage for the gong fu cha ceremony (Pic: MICHELIN Guide Digital)
The Tools Of The Trade
The full Chinese gong fu tea set can be complicated and consist of many tools, each with a specific purpose. For a simple setup, this is what you will need:

Electric kettle
Tea tray: The cha pan holds all the ceremonial tools and has slats or holes to allow waste water to flow through into a tray beneath.
Small Chinese-style teapot: These teapots may be made of clay, glass or porcelain. Zi sha hu teapots are normally made from special clays called Yixing or Chao Zhou and each pot should only be used for one variety of tea as they are porous and will absorb the fragrance of the teas brewed in them. If you intend to brew different types of teas in the same pot, then use a glass or porcelain teapot.
Covered cup: You can brew tea in a gai wan instead of a teapot, or use it as a drinking cup.
Serving cup: The gong dao bei, or serving cup, holds the tea after brewing to prevent the tea from over-steeping and also ensures that the tea is portioned out evenly.
Tea appreciation cups: The tea is poured from the serving cup into tiny individual pin ming bei, or appreciation cups. 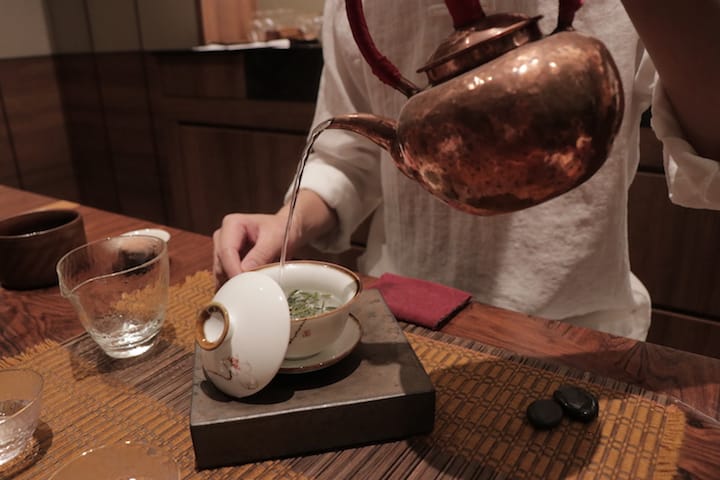 You can brew tea in a zi sha teapot or in a gai wan (covered cup) as pictured. (Pic: MICHELIN Guide Digital)
The Gong Fu Cha Technique
Three main factors contribute to the final brew: the amount of tea leaves used, the temperature of the water and the time taken to steep the tea. A fourth factor, I always believe, is the tea maker’s mood. Tea leaves have life in them and we have to use our hearts to brew a good cup of tea.

1. Place the tea cups, serving cup and brewing vessel (the teapot or covered cup) on the tea tray.
2. Bring water to a boil in a kettle. Spring water is the best, but tap water makes better tea than distilled water which lacks minerality and will result in a flat-tasting brew.
3. Pour the boiling water over and into the cups and vessels to rinse them and warm them up.
4. Place about 5g of tea leaves into the brewing vessel and pour the boiling water in till it overflows. Pouring the water from a higher height allows the leaves to swirl and mix well with the water. Use the lid of the pot or the cover of the cup to push off any foam or small bits of leaves which may have floated to the surface.
5. Use this first infusion to rinse and warm the serving cup and tea cups, pouring away the rest. The first infusion of tea helps the dry leaves to soften and release their flavour.
6. Fill the brewing vessel with boiling water right to the top, cover it and pour more hot water over the teapot to keep its temperature high.
7. Let the tea steep for about 20-30 seconds and then pour it into the serving cup, till the brewing vessel drips dry. This is so the flavours of the next steep are not affected by leftover tea. 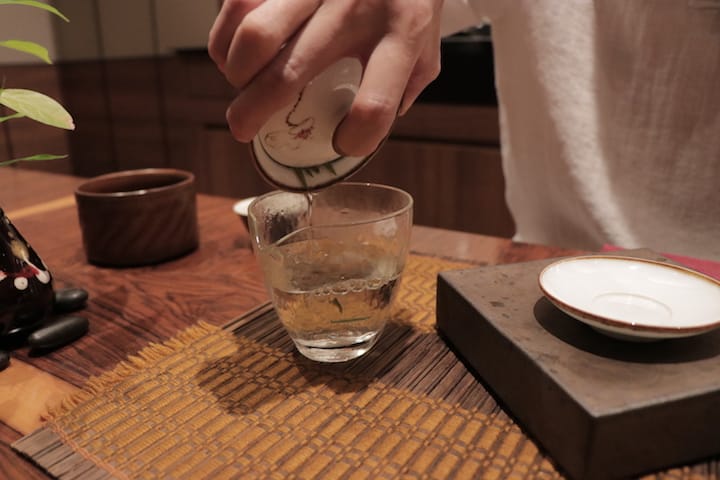 Pour the infusion into the serving cup, letting it drip dry as much as possible. (Pic: MICHELIN Guide Digital)
8. Pour the tea from the serving cup into the individual tea cups at a low height so the aromas are not dispersed.
9. Smell and taste the tea, first with a small sip and then a bigger one, holding it in different parts of your mouth and tongue to experience the complete taste of the tea.
10. For the next steeps, repeat the process from step 6. Delicate teas like green tea can only take up to three steeps while red teas can be steeped six or seven times. 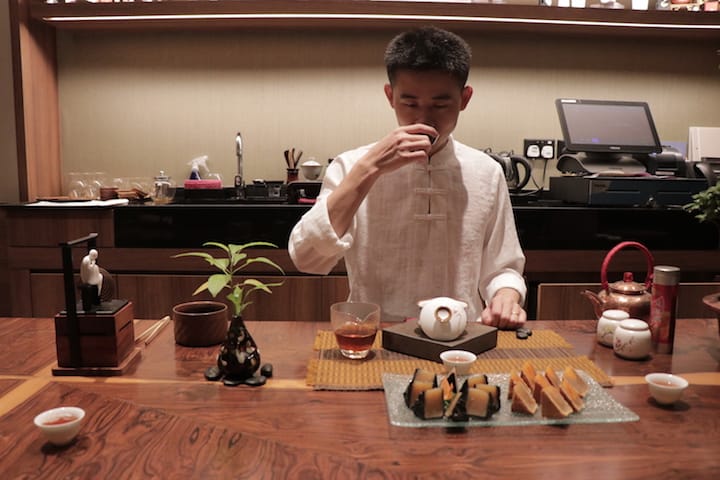 Smell, taste and enjoy the tea with mooncakes this Mid-Autumn Festival (Pic: MICHELIN Guide Digital)
Always had a burning question but not sure who to ask? Send in your questions to lifestyle@michelin.sg with 'Ask the Experts' in the title and we’ll help you find the answer.
Advertisement
Advertisement