Love the classic pandan chiffon cake? Why not make your own with this recipe from chef Malcolm Lee.

“A good pandan chiffon cake is moist and fluffy on the inside and a nice golden brown colour on the outside,” says chef Malcolm Lee of one-Michelin-starred Peranakan restaurant Candlenut.

In that one sentence, he has encapsulated the sheer pleasure of tearing into this soft-as-clouds sweet treat, one which CNN recently voted as Singapore (and Malaysia’s) national cake.

Indeed, the chiffon cake can be found easily in most bakeries across the island and affordably priced too. Its exact origins are not clear, but it's undoubtedly the result of combining Western cake-making techniques with the flavours of Southeast Asia. Here, egg whites are to be beaten into soft peaks and then folded into a mixture of fragrant pandan juice and creamy coconut milk. 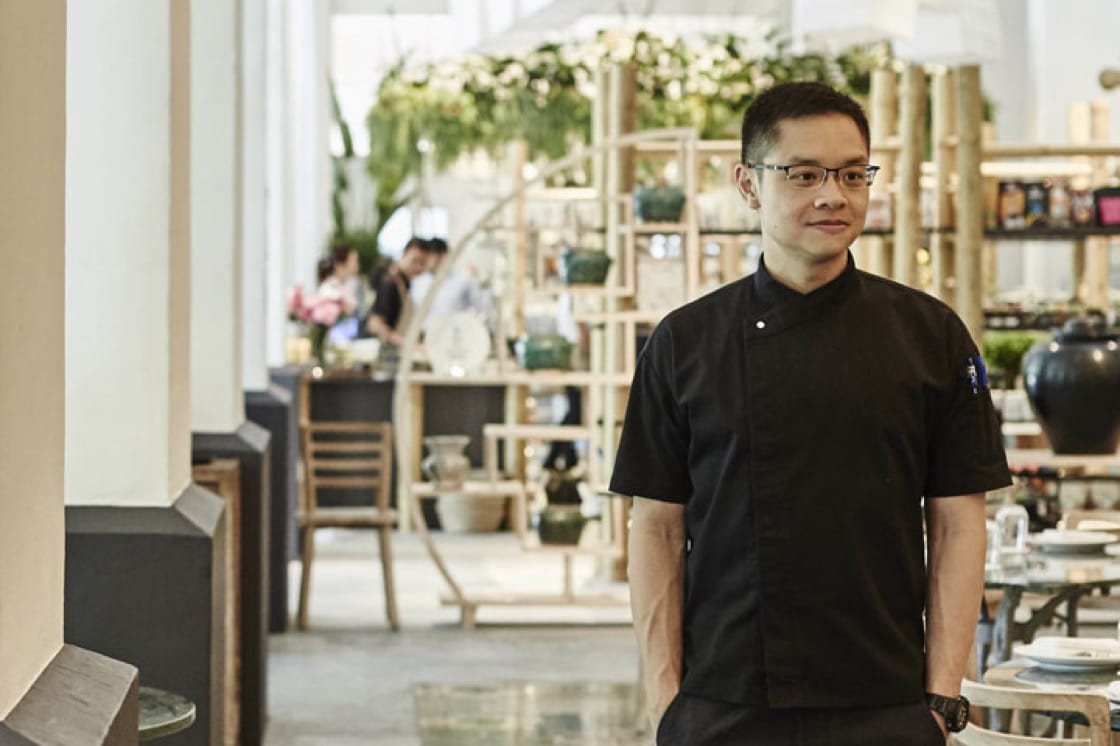 Chef Malcolm Lee. Photography by Wong Weiliang.
This is in fact, the tricky part as it’s vital to creating a light-as-air cake. “Beat the egg whites well until they are firm,” says the chef. “When you fold the mixture together, make sure you don’t beat the air out of it.”

Another vital tip: always squeeze your own pandan juice. While factory-manufactured essence and colouring might be one less step to worry about, having fresh pandan gives a truly fragrant cake that no bottled essence can.

One final word of advise the chef has, is to use an oven thermometer. This is the important element that keeps the cake moist while sporting a brown crumb. “Every oven is different,” says Lee. “Even though the recipe says 160 degrees, you have to test your oven to see what works – it could be 170 degrees, or even 180 degrees.” 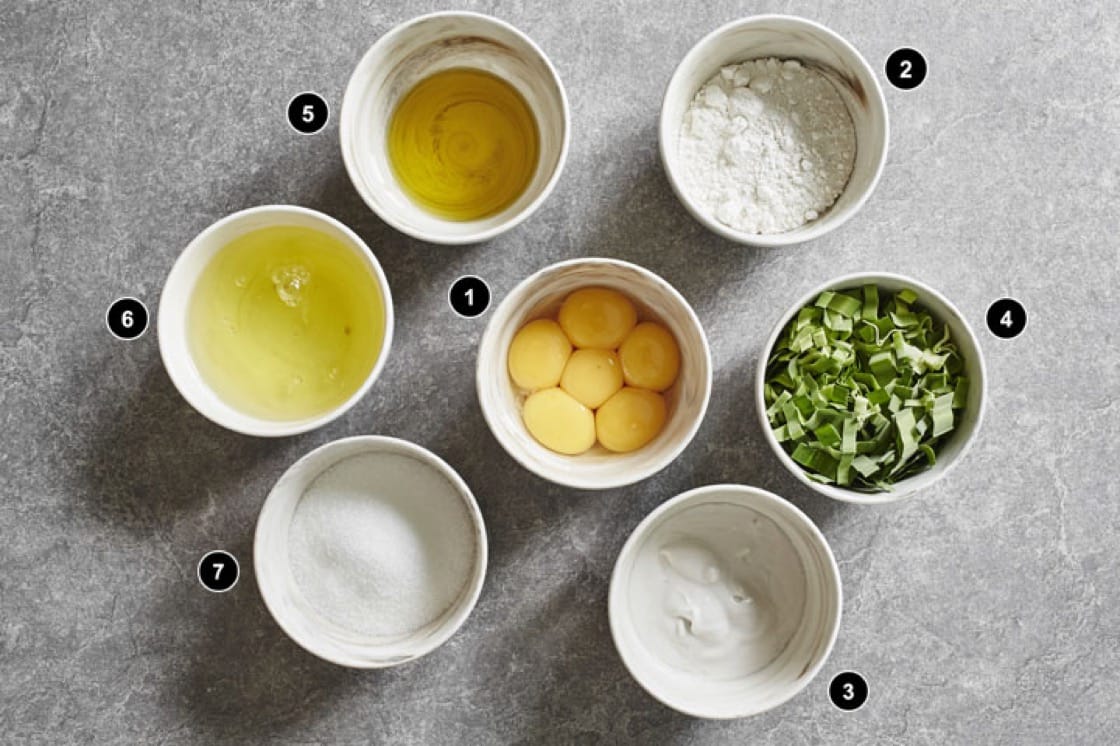 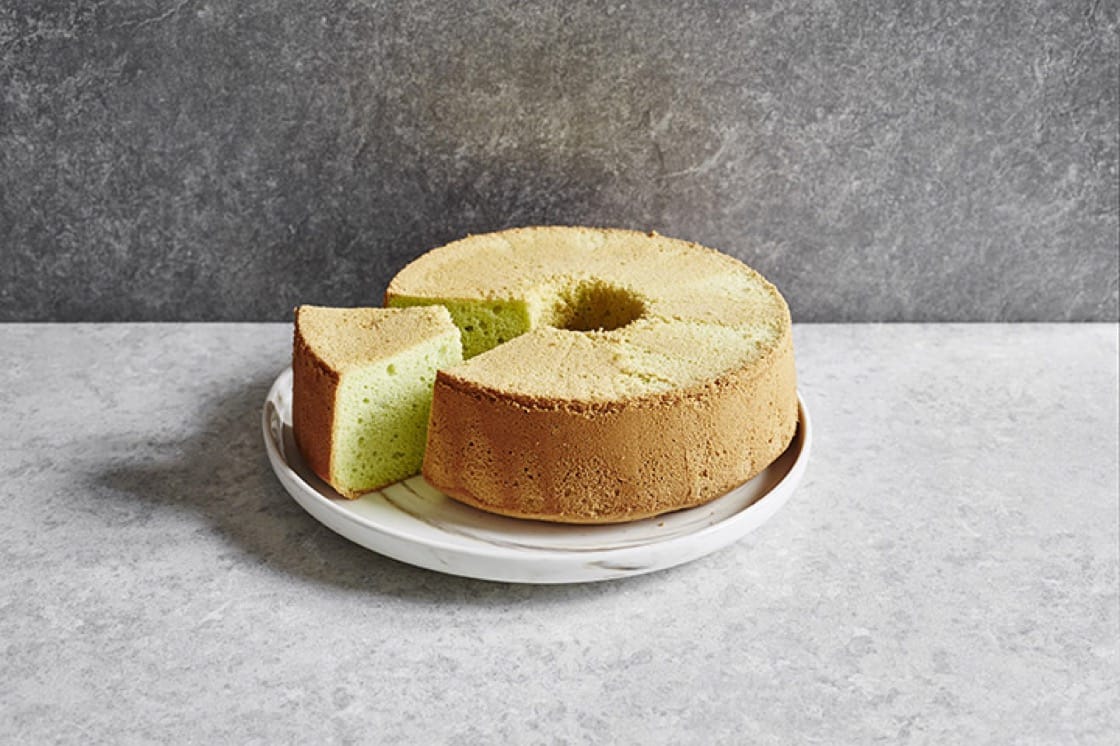 The completed cake. Photography by Wong Weiliang.
Method
1) Preheat oven at 160deg Celsius and prepare a 23cm chiffon cake tin.
2) Sift cake flour into a bowl and mix with egg yolk.
3) Prepare the pandan juice: wash 8 pandan leaves and cut into strips of 1 to 2 cm.
Blend with 50ml of plain water and strain the mixture to get 30ml of juice.
4) Mix coconut milk, pandan juice, melted butter and egg yolk mixture well.
5) Whisk egg white and sugar with mixer until soft peaks form.
6) Gently fold into egg yolk mixture and mix well.
7) Pour batter into cake tin and bake at 160 deg Celsius for 15 mins then reduce to 120 deg Celsius for 25mins.
8) Remove the cake from oven and turn cake tin upside down, leave to cool on a wire rack.
9) Run a thin blade knife around the sides of the pan and centre core to release the cake, run knife along the base of the pan to remove cake.
10) Cut into desired number of slices and serve.