As a chef, Mitsuru Konishi works with the most premium ingredients daily.

But for the 45-year-old chef who first entered the trade at 18, it is the simplest of ingredients — good olive oil, eggs and delicious bacon — that he credits for his choice of career.

“There are two reasons that made me follow my dreams and become the chef I am today. First, my mother inspired me and influenced my work and second of all, it was the outcome of cooking with ingredients, sometimes as simple as olive oil, eggs and bacon,” says Konishi, the executive chef of MICHELIN-starred Zest by Konishi. 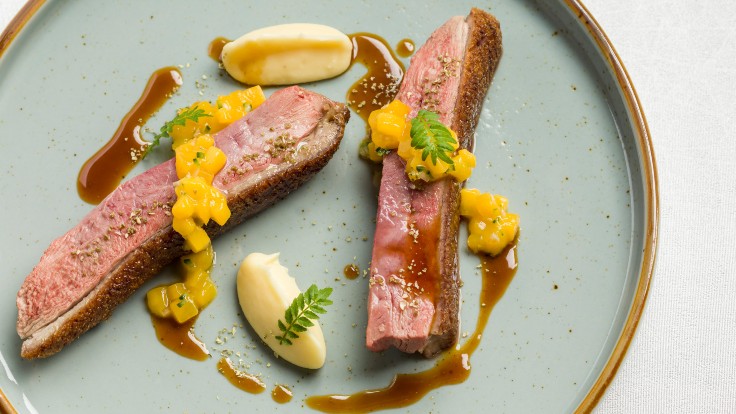 In his hands, the humble cauliflower is the perfect foil for an amuse bouche of Botan ebi, Sea Urchin, Cauliflower with Crustacean Jelly and Kristal Caviar, while a main course seamlessly binds layers of delicate flavour from Japanese Amadai, clams and zucchini in a French-inspired Bouillabaisse Sauce. In another creation, the addition of refreshing kumquat and sansho pepper add a distinctive Asian touch to flavourful Challandais Duck.

Desserts are as tasty as they are Instagram-friendly: the signature Rose and Raspberry Saint Honoré, comprising delicately perfumed rose and raspberry cream sandwiched between layers of puff pastry and choux puffs, is designed for double taps. 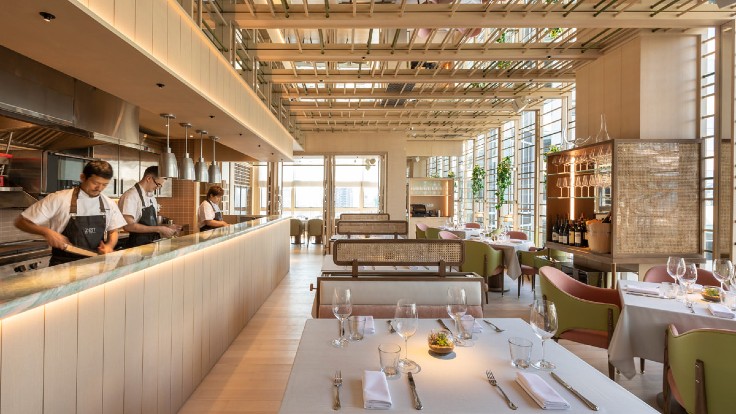 The modern, sunlit interiors of Zest by Konishi

Konishi’s precisely balanced blend of contemporary French techniques and Japanese sensibilities was forged from stints in some of the world’s most demanding kitchens, such as in Japan at two MICHELIN-starred L’Atelier de Joël Robuchon in Tokyo, and at France’s Michel Rostang, L’Hôtel de Carantec and two-MICHELIN-starred Taillevent. At the latter, he made history as the revered institution’s first Japanese sous chef.

The Okayama native moved to Hong Kong in 2013 to helm Wagyu Takumi (now renamed as Takumi by Daisuke Mori) as executive chef, and helped the restaurant to earn its two MICHELIN stars in 2014, which it maintained until 2016.

In 2015, chef Konishi was also bestowed the title of Chevalier dans l’Ordre National du Mérite (Knight of National Order of Merit) by the Consul-General of France in recognition of his commitment to promoting French culture and gastronomy abroad.

At the two-storey ZEST by Konishi, which opened in August 2019 under the hospitality conglomerate Lai Sun Group’s umbrella, chef Konishi’s showcases his distinctive brand of haute French Japanese cuisine on the elegant 28th-floor The Dining Room, while The Lounge one floor above offers casual express menus, bento boxes and playful Nippon-inspired craft cocktails, set against a backdrop of panoramic views over Hong Kong’s glittering skyscrapers in the evenings.

The restaurant’s focus on freshness and seasonality impressed MICHELIN inspectors, who bestowed a MICHELIN star on the venue in the MICHELIN Guide Hong Kong Macau 2020, just four months after its opening.

We speak to chef Konishi about his thoughts on the latest in his string of recognitions.

See What MICHELIN Inspectors Said About Zest By Konishi 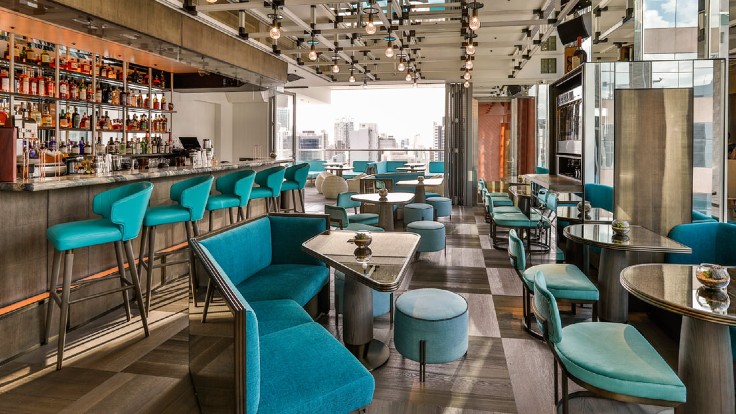 How did you feel when your restaurant first received a Michelin star?
I was euphoric and excited! Regardless, we aim to put more effort and accomplish to maintain our MICHELIN star.

How did you celebrate?
We celebrated with the entire team at Zest with a toast and thanked everyone for their support and hard work.

How has the MICHELIN Guide influenced your career?
Frankly speaking, it gave me an opportunity to enlarge my career circle, such as getting to know other chefs and guests from different places.

What are your proudest achievements as a chef?
When I see my former colleagues being recognized and having fulfilled their dreams of becoming a chef one day.

Do you have any advice for young cooks who want to get a MICHELIN star?
First, my honest advice is to learn the basic culinary skills. Basic technique is the main key to success that will form the basis for your personal style or creativity. Second, be ready to commit to long working hours, which takes a lot of effort. Overall, becoming a chef is worthy of respect and it is sacred work.