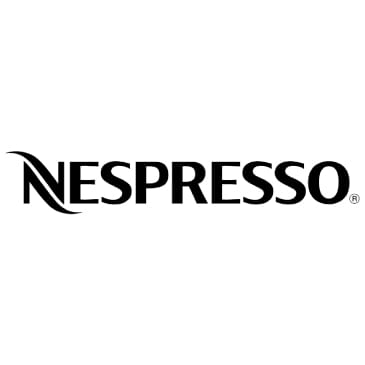 An intricate parade is taking place in the light-filled dining room of two-MICHELIN-starred Kwonsooksoo in Seoul’s trendy Gangnam district. Immaculate, edible morsels appear in succession from the kitchen of chef-owner Kwon Woo Joong, before being served on individual wooden tables in front of each diner in an artistic display.

Like the restaurant’s name – 'sooksoo' is an archaic phrase for 'professional cook' – meals at Kwonsooksoo are designed to follow the Korean doksang custom of serving each diner on a solo table. The food, however, is anything but dated. Kwon draws from traditional techniques and rarely seen local produce to offer his own modern, creative interpretation of Korean haute cuisine.

Over at one-MICHELIN-starred Soigné, indigenous ingredients also take on starring roles in chef-owner Jun Lee’s story-driven episodic menus, though his execution of these reflect his multi-cultural culinary career. Lee studied at the Culinary Institute of America in New York and later cut his teeth in the city’s top restaurants such as Thomas Keller’s Per Se and one-starred Italian restaurant Lincoln, and the influences clearly manifest in his boundary-pushing contemporary Seoul cuisine.

Compatriot chef Park Jung Hyun, meanwhile, continues to set the stage for the rise of contemporary Korean cuisine in Manhattan. His restaurant Atomix was recently recognised with two stars in the MICHELIN Guide New York City And Westchester County 2020 Selection for its elegant reinterpretations of traditional dishes such as jeon and banchan. 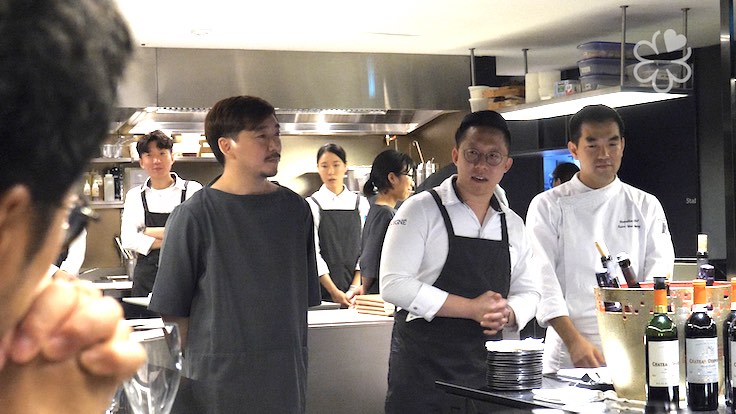 In October 2019, these three chefs joined hands to create an exclusive dinner hosted by Soigné in Seoul that explored the themes of modern Korean cuisine through each of their different lenses. Organised by Nespresso, the event was the second installation this six-hands collaboration following a sold-out dinner at Atomix in New York in September. 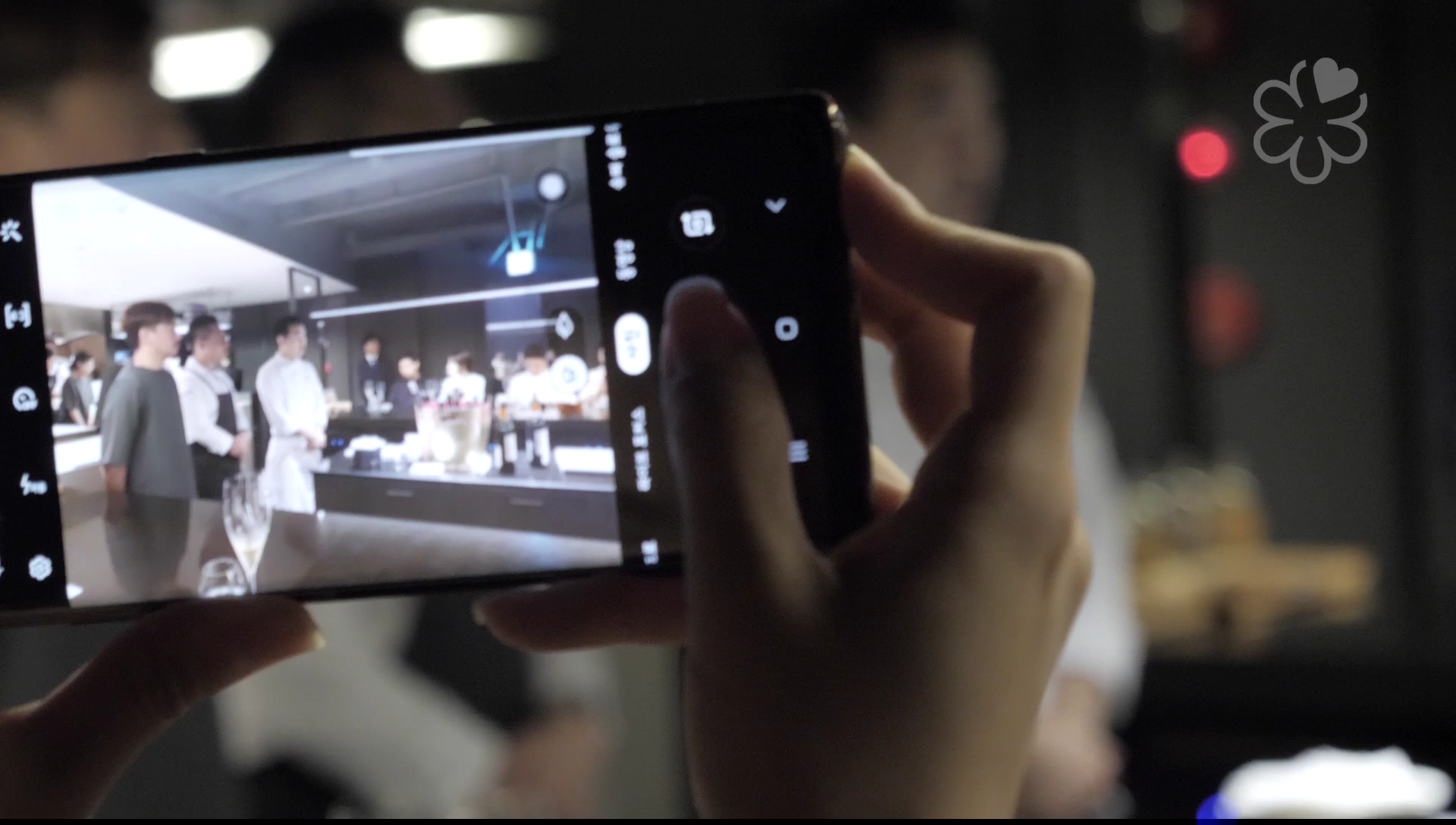 Though Kwon, Lee and Park have distinctive cooking styles today, they share the same culinary roots: all three call Kyunghee University in Seoul their alma mater. “We started with the same dishes, attended the same lessons and started our cooking careers from the same place,” says Kwon. “We're just like plants from the same flowerpot, but we have all grown up as different trees. We're curious to see what kind of trees each of us have become, that’s why we are doing this together.”

For their collaboration meal, Kwon’s starters bore flavours that were at once contemporary yet familiar. His elevated take on yukhoe, a traditional Korean beef tartare, incorporated earthy strips of wild pine mushroom and a light dusting of sesame and mint powder. A broth of beans from the mountains of Myeongjisan was scented with black truffles, while a light-as-air tempura of zucchini flower was filled with shrimp and sweet corn.

Park, too, breathed new life into a Korean staple of cucumber namul by elevating it with Golden Kaluga caviar, smoked eel cream and crisp discs of Persian.

“Chef Park’s dish of cucumber with caviar is inspired by the memory of the side dishes which Korean people eat every day. But he’s been able to represent how that common concept can become a fine dining item that can appeal to a global audience,” explains host chef Lee. 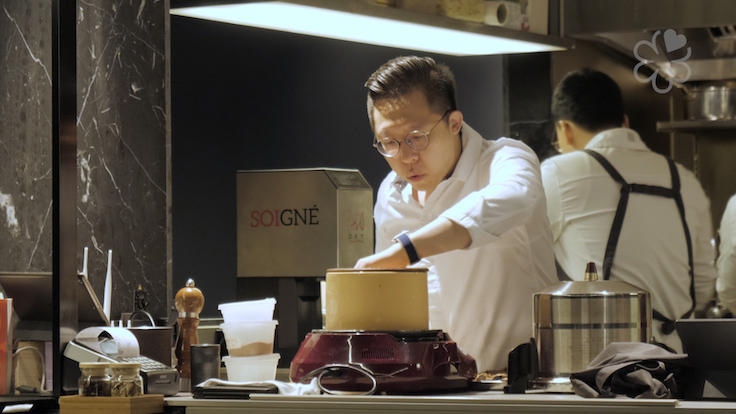 Host chef Jun Lee prepares deodeok in traditional red ginseng style.
Lee’s dish makes use of the local deodeok root as its starring ingredient. The fibrous and bitter bonnet bellflower root was prized in the olden days for its medicinal properties but has since fallen out of favour with the younger generation, but “I want to represent how forgotten recipes can be a new trend by a young chef,” he explains.

First, Lee steams the deodeok in a preparation not unlike that of red ginseng and pairs it with parsnip, a creamy comté cheese puree and charcuterie crumble. To complement the earthy body of the root vegetables and the juicy acidity of the red deodeok, Lee infuses a shot of Nespresso’s Exclusive Selections Kenya Milima coffee into the accompanying sauce. 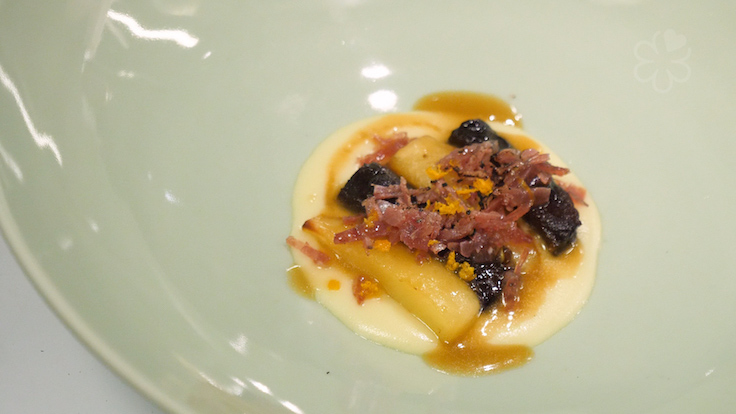 Chef Lee infuses Nespresso’s Exclusive Selections Kenya Milima coffee into his dish of red deodeok and parsnip.
Besides serving as a celebration of their friendship, the collaboration was an opportunity for them to showcase and explore the possibilities of nouvelle Korean cuisine, they say. “Even though Korean food is very popular in New York, a lot of people still think that Korean food is always very spicy or has a lot of garlic. But there is more to Korean food,” Park says. “What we are doing is trying to open the barrier of Korean food little by little. There’s no answer for what’s going to be the next step for Korean food.” 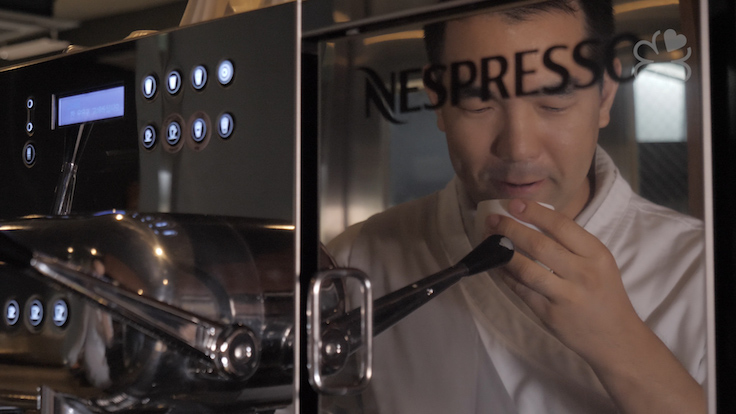 Collaborative events like this 6-hands organised by Nespresso allows chefs to explore their creativity.

Though it has been several years since they have shared a classroom, the mutual learning continues. “Having the same passion doesn’t just happen, we are growing with each other and inspiring each other. Just like how Nespresso always tries to bring in new products and new flavors, I think that really represents the full passion of coffee.” says Lee, explaining the values that the coffee brand shares with these top chefs. Kwon agrees: “To guarantee the same quality and taste of all the food we serve, we put in a lot of effort. Nespresso is a coffee brand that upholds high quality and consistency and their ideals are very similar to our cooking in this way.”

These Asian Aphrodisiacs Will Spice Up Your Valentine's Day Dinner

ingredients dining out Valentine's Day
All articles of Features