One fine morning last November, as the sun illuminated every corner of the New Territories, Vicky Cheng, partner and executive chef of one-MICHELIN-starred VEA Restaurant & Lounge was on his way to the Hong Kong Organic Waste Recycling Centre in Sheung Shui. Instead of cooking in his restaurant, he had been invited to be the guest chef at a special farm-to-table luncheon hosted by Nespresso at the recycling centre's on-site farm.

Cheng's menu for the day was designed around vegetables grown on the farm from used coffee grounds collected from Nespresso consumers.

Among them were radishes, kale, romaine lettuce, Indian lettuce and Thai basil, all harvested on the day. Consistent with his French-Chinese style of cooking, Cheng incorporated fu yu (fermented bean curd) and Chinese cured pork belly into the kale and romaine lettuce mix to create his take on the classic Caesar Salad.

For Cheng, the choice to use vegetables locally grown on coffee grounds is not only good for the environment, but for diners' palates too.

"Giving coffee grounds a second life is very meaningful to me,” said Cheng, who is also Chef Ambassador of Nespresso Hong Kong. "The high quality of the vegetables is thanks to the use of the coffee grounds, the tender care provided by the farmers, and the unique terroir of the region." 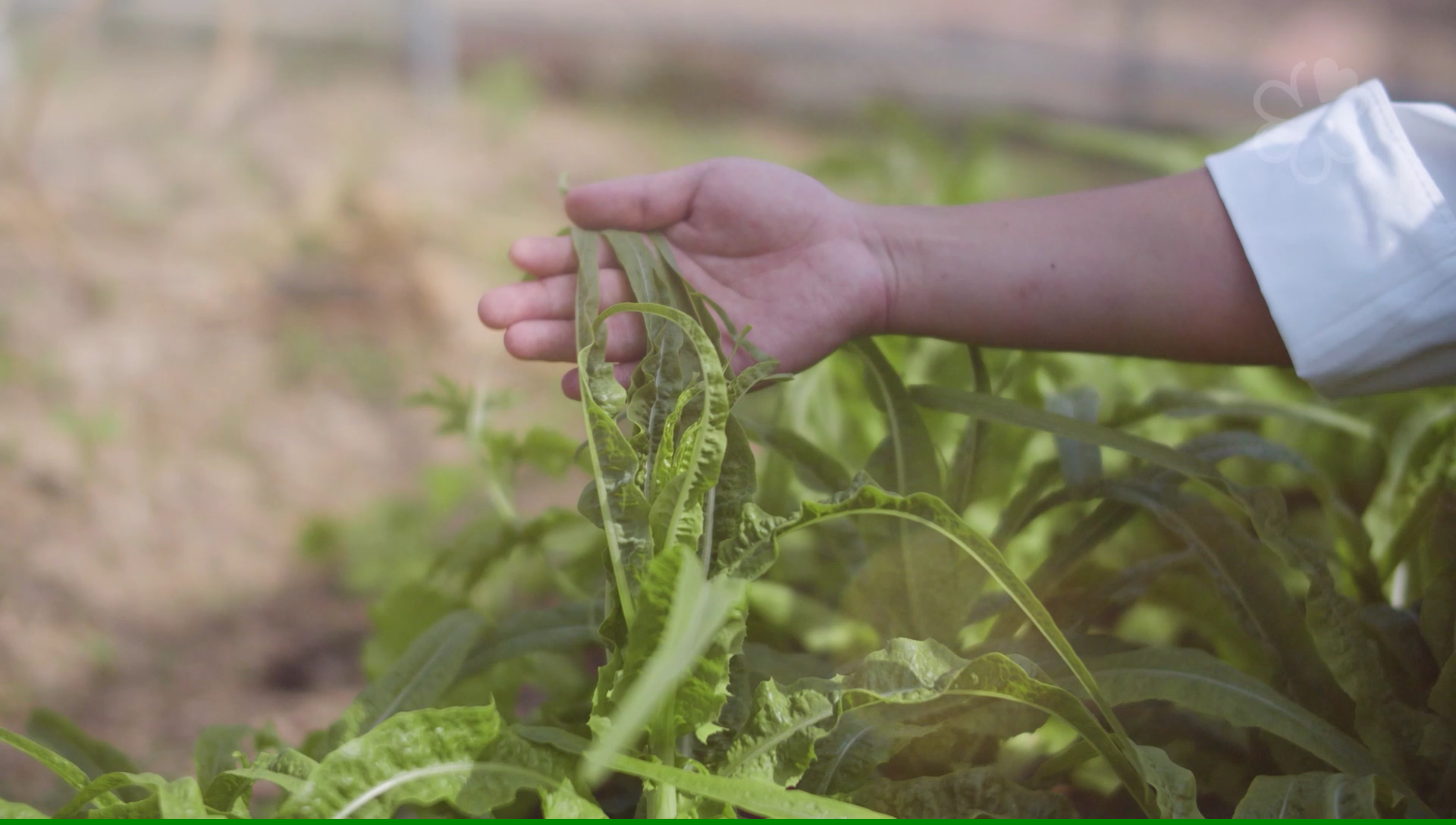 Video: See how used coffee grounds make the journey to become a farm-to-table feast in the hands of VEA's chef Vicky Cheng.

First launched in Switzerland in 1991, and later expanded to Hong Kong in 2011, Nespresso’s capsule recycling programme has received increased recognition and uptake over the years, according to Justin Lam, Business Executive Officer of Nespresso Hong Kong and Macau.

As part of the programme, customers are encouraged to drop off their used capsules at the collection points of designated Nespresso boutiques. The brand also collects used capsules from customers’ doorsteps and partner companies, such as hotels and restaurants, before sending them to a local recycling plant to separate the coffee grounds from the aluminium packaging.

Once the coffee grounds have been separated from the aluminium containers, they are delivered to the Nespresso Farm located at the Hong Kong Organic Waste Recycling Centre. 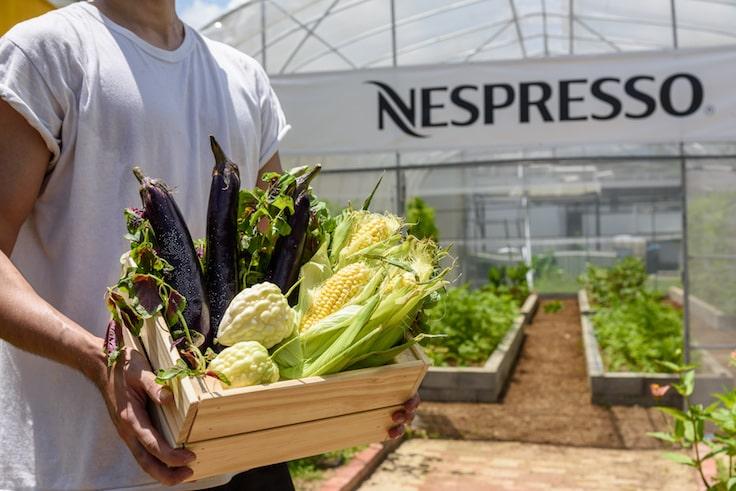 “Coffee grounds are a very good source of compost, as they are rich in nitrogen and easy to process as compared to bean dregs, which are prone to odour, or food waste that needs to be separated from water,” Hermia Chung, the site manager of the Hong Kong Organic Waste Recycling Centre, explained.

Upon receiving the coffee grounds, the farmers would combine them with other kinds of food waste, adjust the humidity and then put the mixture in the composting area. After the microorganisms have completed the decomposition process, the compost is ready to use for farming.

The coffee grounds-based compost is used throughout the entire farm, where crops such as lettuces, kale, tomatoes and radishes flourish under Chung's care.

"To support local farmers and communities, the harvests collected will not only be sold in local supermarkets, but also donated to non-profit organisations to provide food for families in need," said Nespresso's Lam.

Upon receiving the coffee grounds, Hermia Chung, site manager of the Hong Kong Organic Waste Recycling Centre, will decompose them into compost, which is then used for planting vegetables.

For Nespresso, aluminium is the ideal material for capsules as it provides a complete barrier to light, oxygen and moisture, which preserves the quality of the coffee. Furthermore, aluminium can be recycled indefinitely and can be melted and made into different products. Nespresso had previously partnered with Victorinox to create classic Swiss Army knives. Its latest project is to build bicycles named RE:CYCLE with processed aluminium by working with Swedish brand Vélosophy. One thousand bicycles have been produced and released for sale worldwide since the initiative began last year. 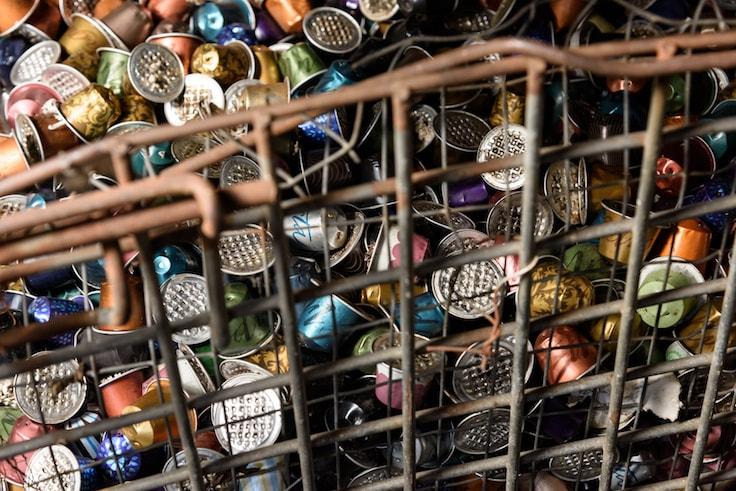 Nespresso will shred recycled coffee capsules to separate coffee grounds from the aluminium packaging, both of which will be repurposed and given a new life. (Pic: Nespresso)

“Supporting sustainable development has long been rooted in my heart,” said Cheng, who had previously worked in renowned restaurants such as Restaurant Daniel in New York. “As chefs, we should support sustainable development, as we are the ones working directly with the farmers and the ingredients. If we do not take this step, who will?”

Besides the vegetables grown on the coffee grounds compost, Cheng also showcased squid, shrimp, chicken and pork from the region in his menu, which included dishes such as Grilled Squid, Chilled Flowery Crab Tossed With Chicken Fat, Pork Fat Rice With Local Pork Belly Char Siu. “For me, when you talk about sustainability, I also talk about localisation,” he explained.

Radishes were presented in a container resembling a mini recycling bin.

In place of cutlery, all the Nespresso-invited attendees used their hands to enjoy the food directly from the table decorated with banana leaves. At the end of the luncheon, Nespresso presented all guests with a pair of chopsticks made of recycled aluminium, while the chef presented them with a bottle of hibiscus flower jam as a door gift. Naturally, the hibiscus was grown on compost with coffee grounds.

“The whole bottle is made from hibiscus grown from coffee grounds that you, too, have at home,” Cheng said. “I hope that when guests enjoy this jam at home, they will remember the small step we made and that its impact could be profound and long-lasting.”

Nespresso’s Lam said: “It's easy to talk about how we're going to be sustainable, but it's good to see all of these being brought to life. It's great to see that our aluminium and our coffee grounds are both creating second lives in their own ways, through products, as well as the farm produces we enjoy today.”

He hopes to create greater awareness of the brand’s recycling programme, as he believes that making a difference is not that difficult and can be done by anyone. He added: “We'd love to hear from any farmers who are interested in working with us.”

Chef Cheng concluded: “I'll be glad to see my guests bring their used coffee capsules to VEA. If everyone takes a small step, we will make a big impact.”

This article is written by Mandy Li and translated by Tang Jie.