Kickboxing and burpees. Running and weightlifting. Welcome to the world of Olivier Elzer, the executive chef of two-MICHELIN-starred L’Envol.

One would think that chefs, in this case Elzer who shoulders the responsibility for upholding the high culinary standards expected of a MICHELIN-starred establishment, would not have time for sports or exercise.

But Elzer is proving that staying active is a matter of making time, not having time. “For me, life is about balance. The kitchen is a very stressful environment, so sports is my key to balance health and work.”

On a regular day, the chef would spend an hour working out at the gym in the early morning, and for a few times a day in the week, he would add a boxing or strength training session after lunch service. “That one hour in the afternoon actually gives me an extra boost of energy. Even though sometimes I feel physically tired afterwards, the happiness of finishing the performance makes me feel pumped. When I come back to work, my mind is sharp. It’s a beautiful feeling.”

A mindset, a lifestyle

Elzer’s workout routine may seem a bit too hardcore to most people, let alone chefs. To be so committed to his craft while maintaining an active lifestyle, the chef has got the ‘why’ figured out.

“I like the mindset that, with sports, no matter where you start, you can become a little better every time. It gives you hope to perform one day. This is a mindset I bring to the kitchen as well—dedication and hard work always pay off.”

It is by no means an easy path, but Elzer believes doing sports improves his mental strength as well. Ten years ago, his Muay Thai coach took him to a K-1 fight in Hong Kong, where he witnessed a life-changing performance that left a mark on him.

“I saw the mental strength of a man in front of me. I couldn’t sleep that night because my brain kept replaying the fighting scenes. From that day, I started to understand that martial arts are not about violence but the spirit.”

Working in the kitchen can sometimes feel like being in a boxing ring—especially in an open kitchen like L’Envol. The guests are the audience, and chef Elzer—and his team—are the fighters. The same mental strength, sharpness and focus are imperative to achieve greatness.

But boxing isn’t the only sport chef Elzer is into. Constantly looking for new challenges, he has made a promise to himself to do a marathon one day, even though running is admittedly not his favourite.

“Sometimes you have to face adversity to go a bit further,” says the chef. “I started running a few months ago when the gyms were closed. At first, I was breathing heavily—it was not a pleasant feeling. But I just kept going and began to see myself improving. It’s become something I like to do. My goal is to run the New York City marathon before I turn 45.”

At L’Envol, he approaches challenges with the same mentality. The restaurant receives return customers on a regular basis, including guests who have revisited for over 100 times since the opening. “For example, we have a guest who has come to the restaurant for 155 times (and counting), I'm proud to say that he had 155 different meals. I like to be creative and challenge myself to make something new every time.”

“I try to put myself in the shoes of customers who dine out almost every day,” he continues. “I think to myself, if I had to go for a business lunch or dinner—sometimes both—every day, and have heavy, buttery food, it would be very overwhelming for me by the end of the week. That's why it’s important for me to create something light and refreshing for them. 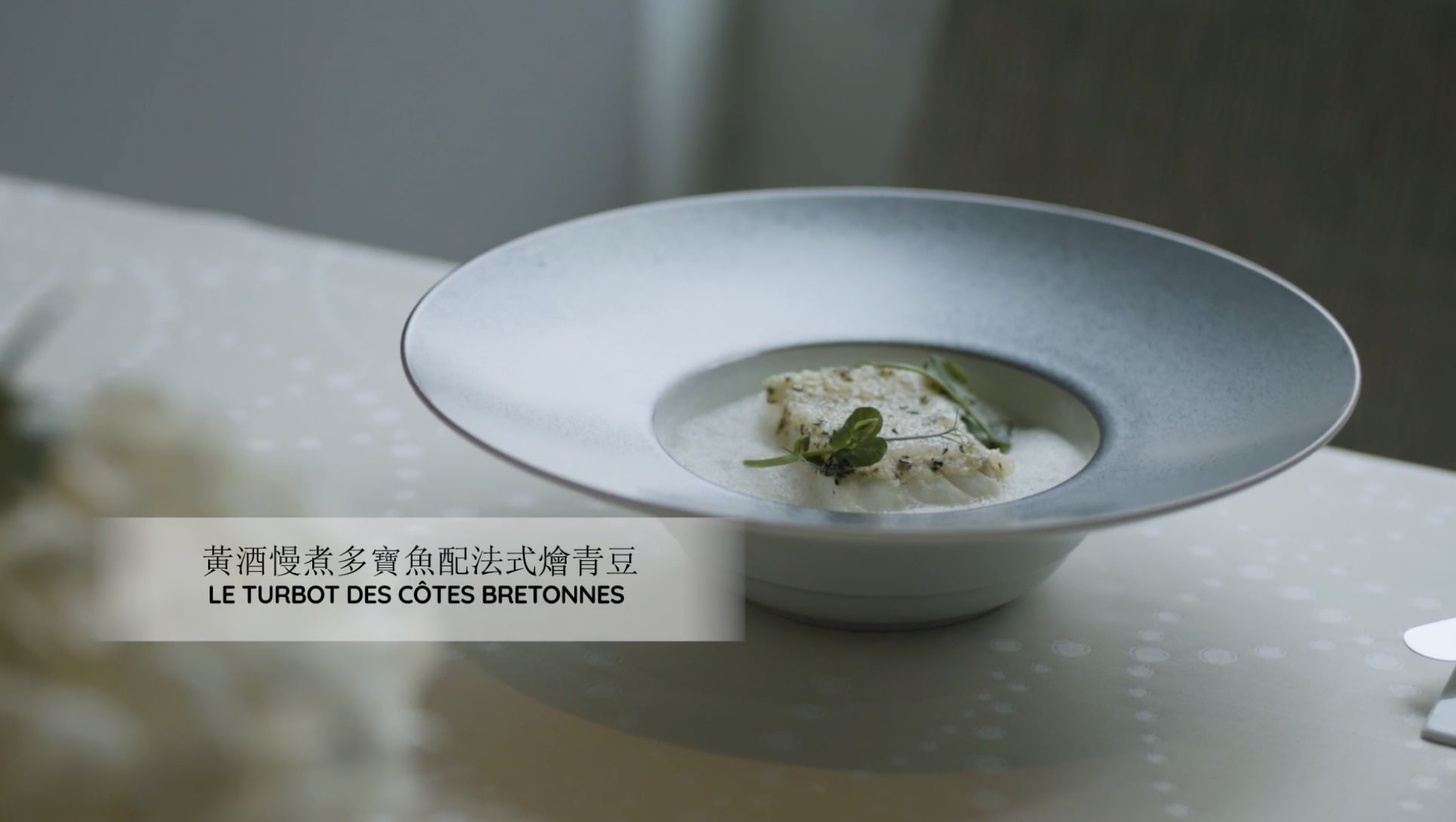 Health starts in the kitchen

“Light and refreshing” may not be anywhere close to synonymous with French fine dining, but Elzer believes that times have changed.

“Many people in Asia think French cuisine is sometimes a bit too heavy. But at L’Envol, I try to change that with well-balanced dishes, which can be delicious but also very healthy,” says the chef. “There’s a misunderstanding that if you eat healthy, there’s no flavour. But we can achieve both by selecting beautiful ingredients and cooking them very lightly.”
Seasonality counts, too. When it comes to French cooking with a healthy twist, the first ingredient that springs to Elzer’s mind is fish. “I love to cook fish,” says the French-German chef. “We use a beautiful turbot from Brittany, which is one of the most prestigious fish in France. We combine it with green peas, which are only in season for one and a half months per year.”

The turbot, which weighs approximately 7kg, is cooked on the bone to lock in moisture in the meat. It is served with a light onion emulsion made with a mix of green pea, lettuce, onion, and wasabi. The wasabi gives it a subtle kick, which is balanced out with the sweet green peas. Add to that a zesty finish with lemon juice and herbs on top, we have a refreshing dish that feels almost guilt-free. 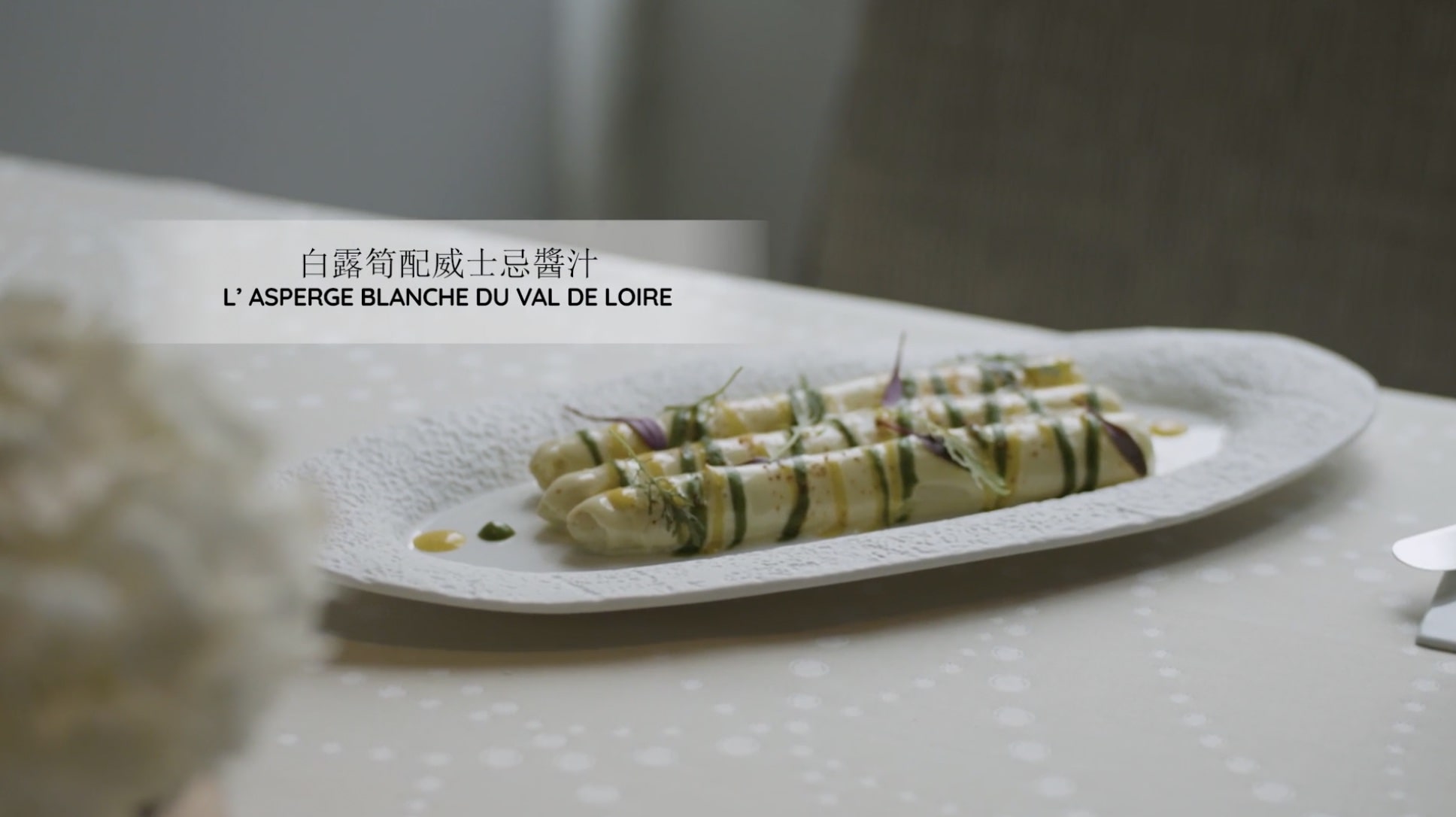 Another light-hearted dish in the works features the French white asparagus topped with four dressings. A juxtaposition of smokiness and acidity comes in the form of a whisky sauce and a passionfruit sauce, which, according to Elzer, “creates a beautiful balance”. Like a blank canvas, the white asparaguses are garnished with a medley of four bright and colourful dressings highlighting a single ingredient: whisky, passionfruit, charcoal and herb. The result? A fine representation of chef Elzer’s approach to healthy living, in true L’Envol fashion.