What do a chef and an interior designer have in common? Despite representing different fields, both are artists in their own right, driven by a passion for creating something from nothing on their respective canvases. In this case, French chef Olivier Elzer and Hong Kong interior architect André Fu find themselves working on the same canvas—L’Envol.

Having just clinched two MICHELIN stars in the MICHELIN Guide Hong Kong Macau 2021, L’Envol at The St. Regis Hong Kong is Olivier Elzer’s latest venture. Born in Germany and raised in France, Elzer’s MICHELIN-starred journey began at the age of 27, when he was at the helm of Abbaye De La Bussière in 2007 and 2008. This year marks Elzer’s 12th year in Hong Kong—where he progressed from two-Michelin-starred Pierre to three-MICHELIN-starred L'Atelier de Joël Robuchon—before opening his own restaurant Seasons in 2014. 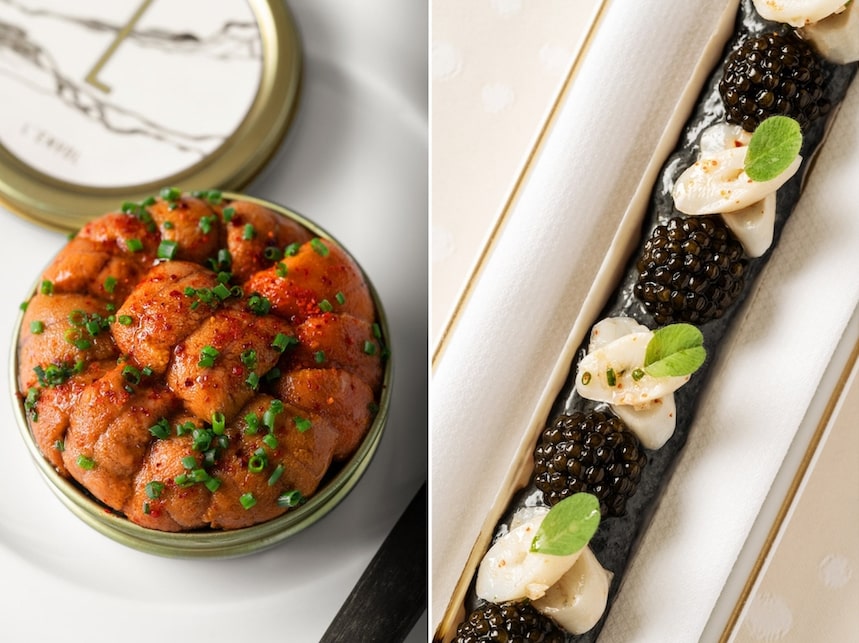 After his departure from Seasons, Elzer moved on to head up The St. Regis Hong Kong’s high-end establishment, L’Envol. The restaurant’s focus on modern French fine dining and attention to detail impressed MICHELIN inspectors, who rewarded the restaurant with a MICHELIN star in the MICHELIN Guide Hong Kong Macau 2020, just eight months after its opening.

A manifestation of Elzer’s heritage and training in MICHELIN-starred restaurants, the cuisine at L’Envol is matched with a bright and ivory interior design, as envisioned by world-renowned designer André Fu. 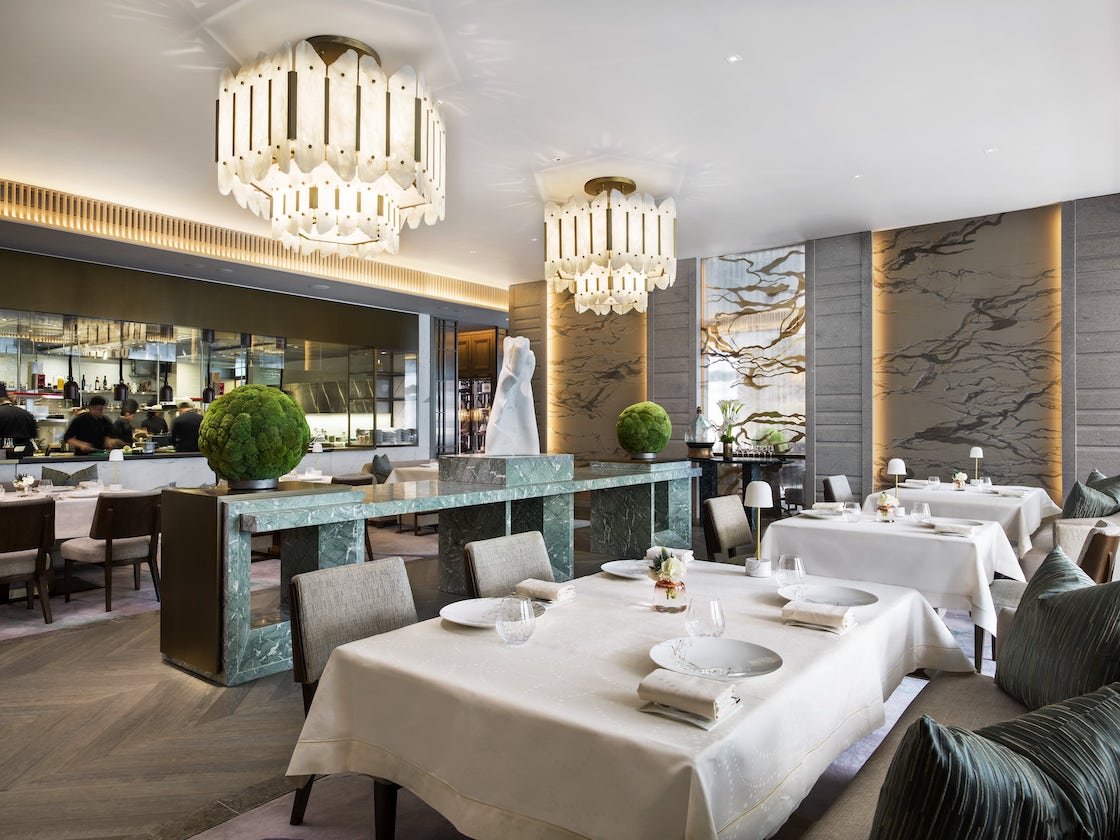 “From the chef's point of view, he's dedicating his own culinary journey, his life, and his own reputation to a venue. What I'm doing is I'm quintessentially creating this backdrop for him to show his best.”

As one of the most sought-after designers in the hospitality industry, Fu is known for his daring luxury designs using a gamut of textured materials that reflect craftsmanship and timeless elegance. Some of his most remarkable F&B projects include JIA Group’s one-MICHELIN-starred Louise and The St. Regis Hong Kong’s one-MICHELIN-starred Chinese restaurant, Rùn.

Much like the Wan Chai neighbourhood it’s housed in, which celebrates contrasts and the juxtaposition of old and new Hong Kong, L’Envol is full of surprises and design elements that go unnoticed, subtly contributing to the chef's culinary excellence. 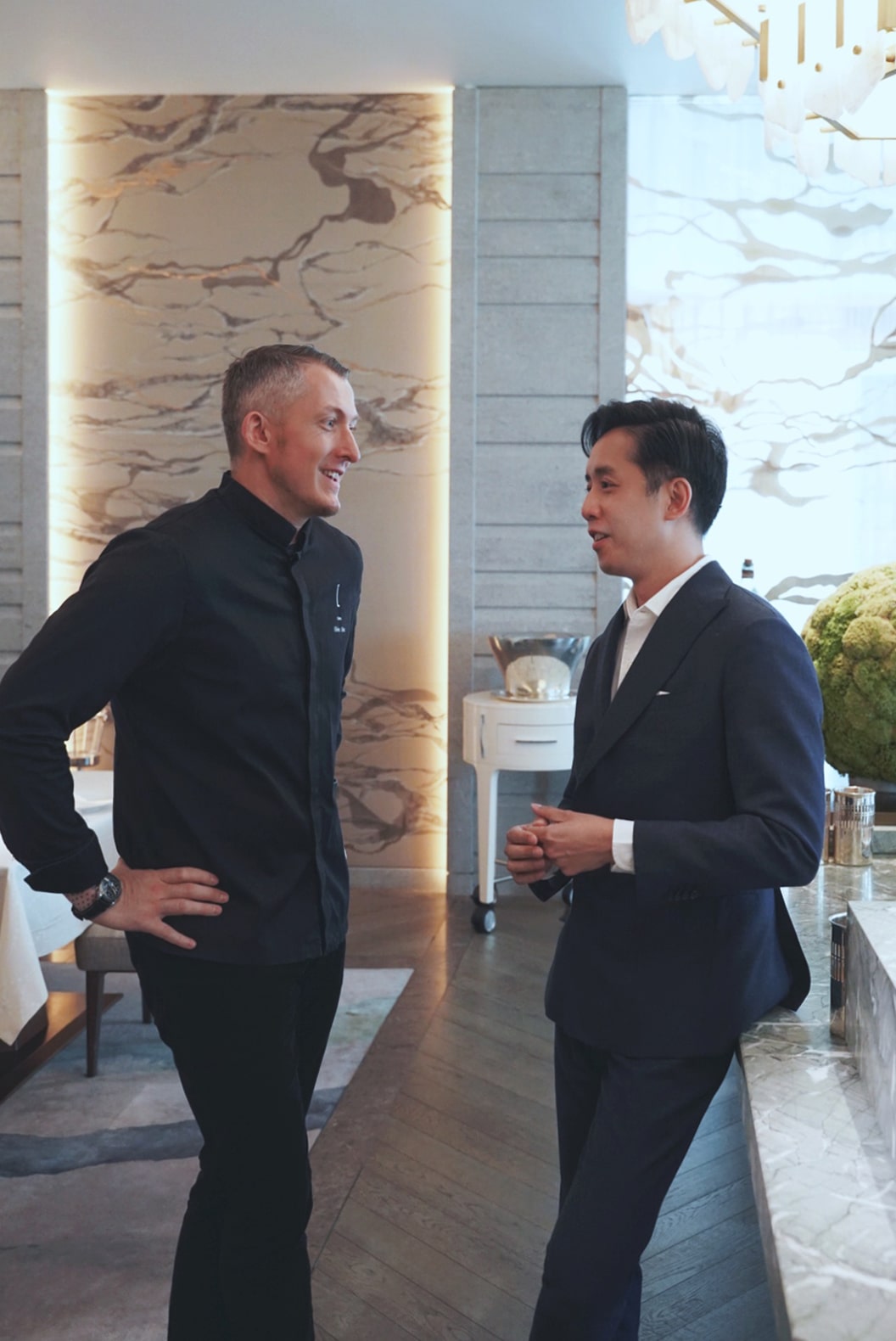 The Synergy
“We've never really met before this project. But to be honest, the vision to create a signature restaurant is under his [Elzer’s] artisanship,” says Fu. He goes on to explain that L’Envol is very different from a restaurant that is “driven by a concept”—one that conforms to the stereotypical idea of how a French restaurant should look or feel like.

“Usually there's just the idea of a cuisine in mind. But rarely would you understand the persona of the chef because that usually comes on a lot later in the process. The fact that we got to meet and have a dialogue at an earlier stage was very useful and important,” he says.

“I think there's not many opportunities in Hong Kong where the chef is involved at the beginning," adds Elzer. "I really love that process. That's why I have a special attachment to this restaurant. It's part of my journey."

Throughout the interview, it was clear that respect is key in this collaboration between Elzer and Fu. “I’ve worked with another architect before, which was much colder,” Elzer recalls. “André has his ideals as an artist. And I'm an artist in my way. So we are both sensitive, sometimes oversensitive.”

“I think it's never easy to have anyone from outside coming in with some other ideas or a different point of view. But I never feel threatened or uncomfortable [working with André],” says the chef.

“I wouldn't say that I have the same relationship [with the chef] in every project that I do, either. It takes time to build that level of trust,” adds Fu. 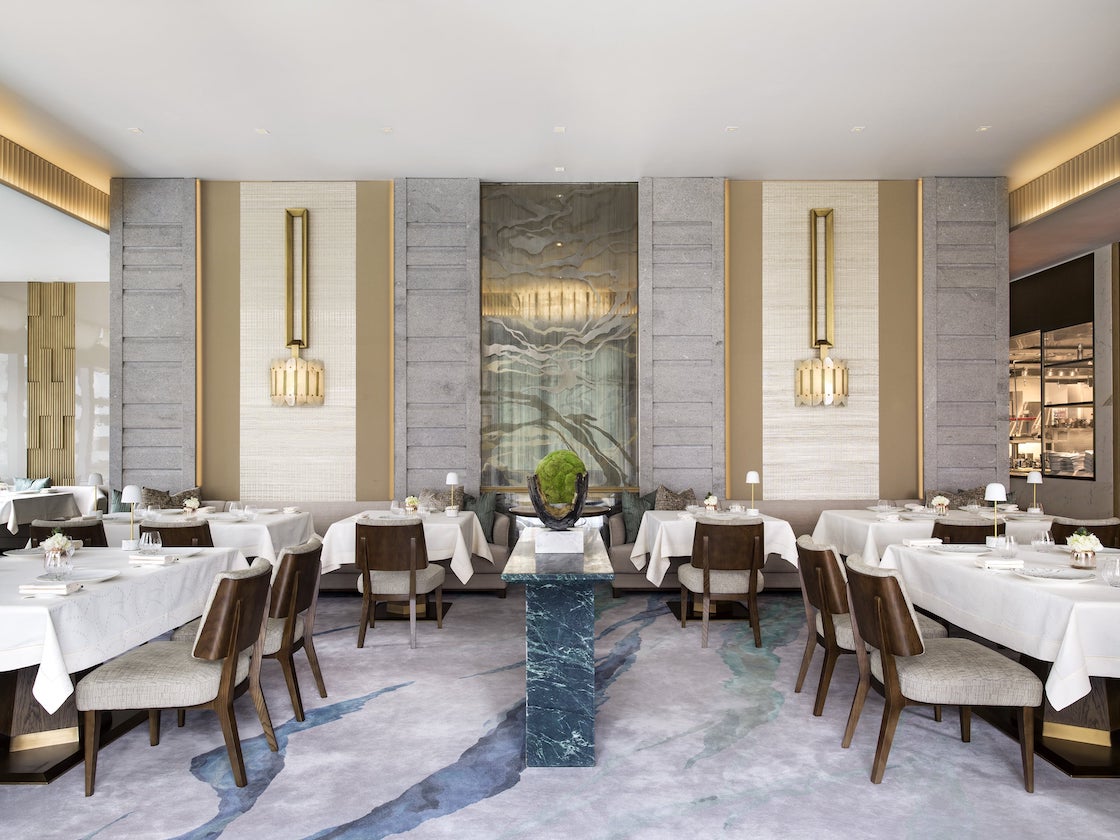 Every surface of L’Envol is deeply textural with silk, gold, agats and marbles—elements that work with the natural light that shines through the expansive floor-to-ceiling windows to create a bright, airy space. The luminosity, together with the spaciousness created by the open kitchen and high ceiling, draw diners into another world away from the bustling city.

“We want to celebrate that lightness. There’s nothing more appealing than a fresh and inviting dining room,” explains Fu. “The key thing about this restaurant, despite the fact that it's got high aspirations, is that it has to be a very comfortable and approachable space.”

It’s no surprise that Elzer shares Fu’s sentiments: “I came from L'Atelier de Joël Robuchon where it’s very dark. I remember back in 2000, everyone wanted a very dark restaurant—it was the trend. I love the fact that we have the natural light, which changes the mood. In the evening, it’s almost as if you’re at another restaurant, the atmosphere is very different.” 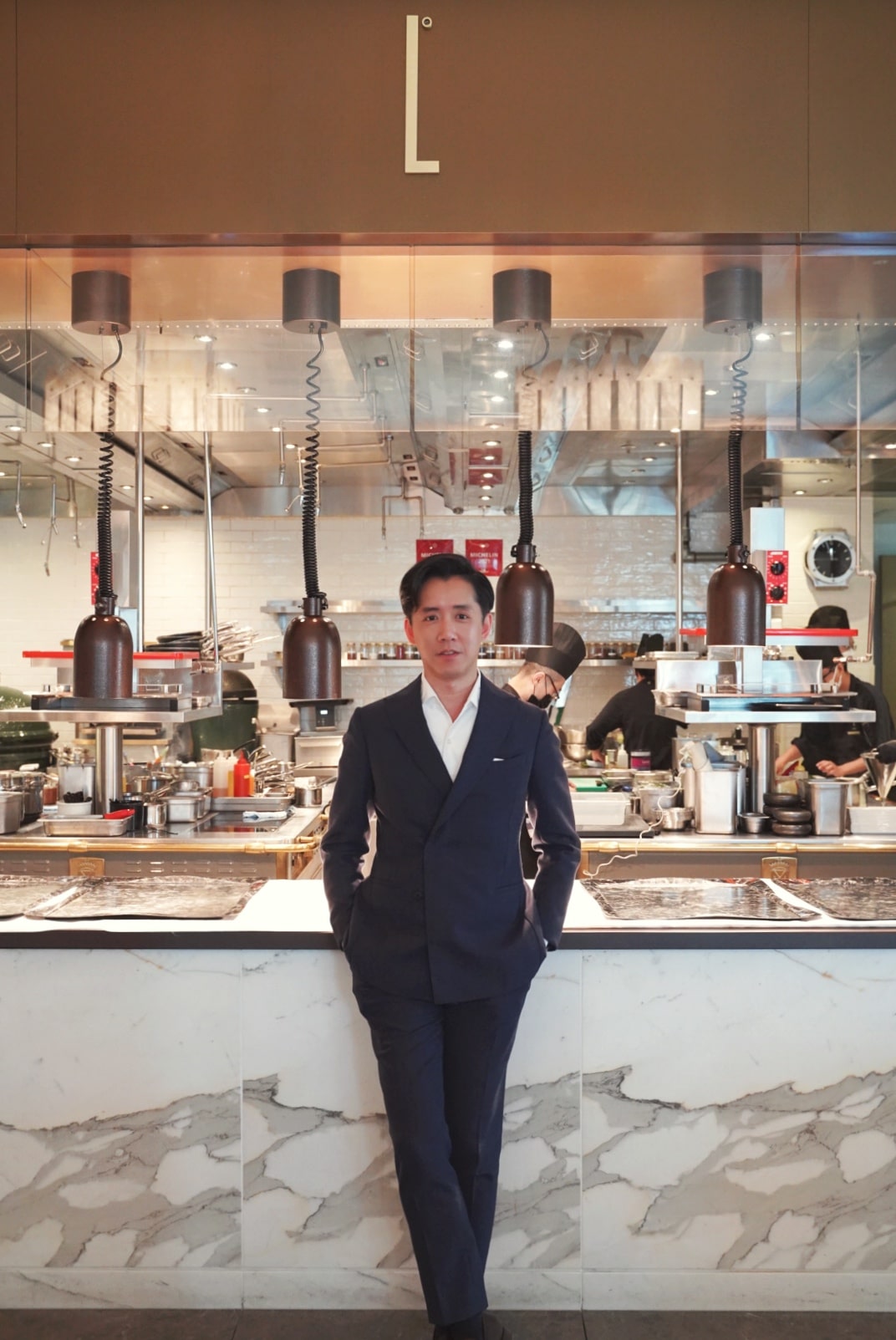 While the spatial generosity comes naturally with the space, Fu deliberately scales down the interior experience with a wall to divide the dining room. “We try to create pockets for every single table, like you feel like you own a corner in the restaurant. So one of the biggest decisions that we’ve made is to create a wall in the middle of the dining room. By that, it creates a front and a back section,” shares Fu. “Historically, when you think about a very aspirational thing, it’s the grander the space, the bigger the light, the better. Here, it's more about having your little corner, your little moment, and having that sense of intimacy.” 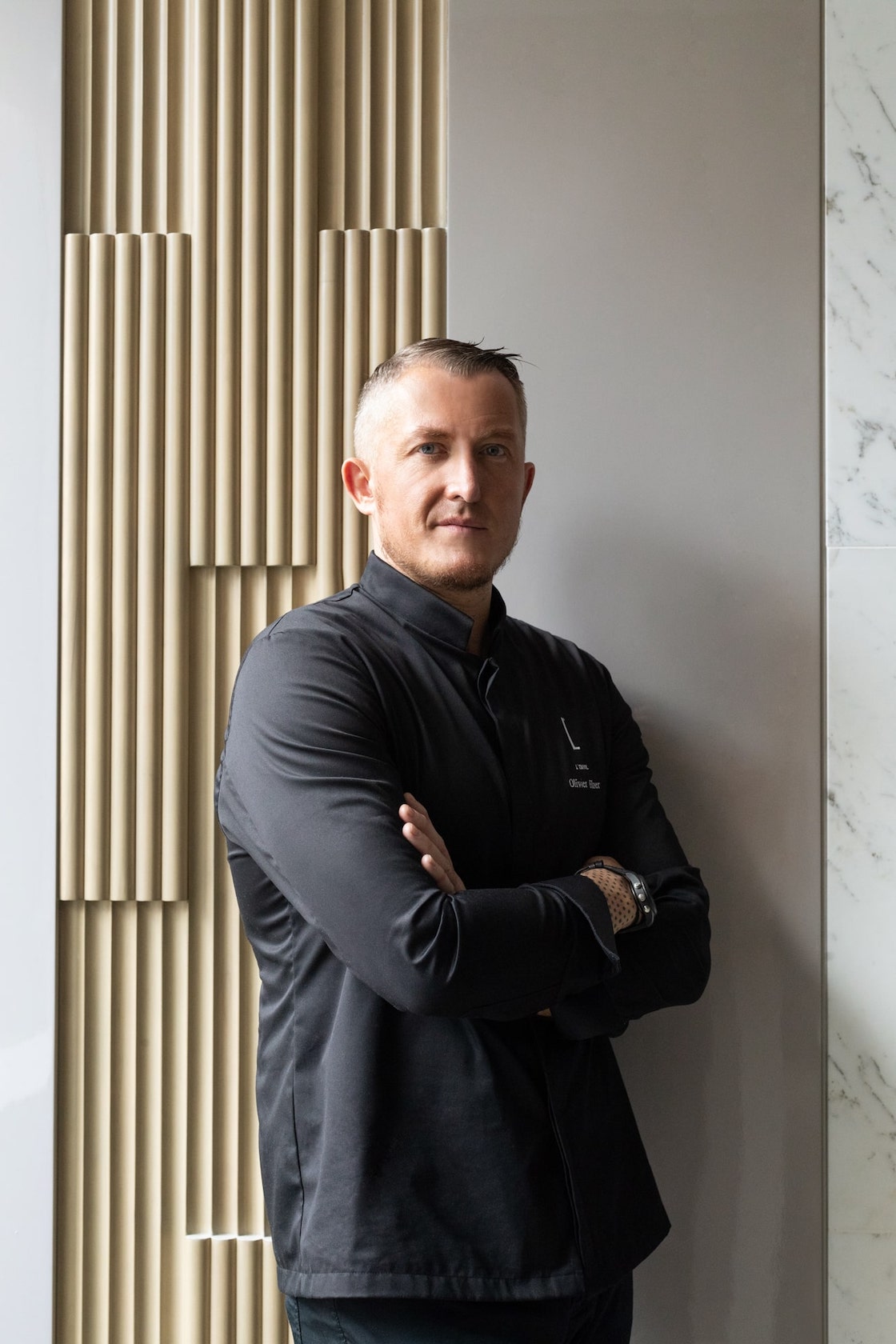 A Balancing Act
In a dining room that may appear feminine, a closer look at the chandeliers reveals that they are not made with crystals, but pieces of agat with rough cuts intentionally exposed. “There are a lot of stones in this restaurant. In my view, the room is, in fact, very masculine,” explains Fu. “It’s very bold, geometric, and symmetrical as well, with blocks of stones that really anchor the space. The rough edges convey an expression of tactility and authenticity.”

At the same time, the ivory palette of soft cream and beige, highlighted with accents of gold, imparts a quieter and more elegant impression of femininity. “The room is actually equally feminine,” says the designer. “Think of L’Envol as a very chic French woman who wears a suit. She is very confident, she knows where she wants to go and what she wants to eat. That is the kind of persona I have in mind.”

Interestingly, this interplay between raw and fine, delicate and strong, feminine and masucline also serves as a reflection of Elzer’s personality. “I like the combination of the extremes because it’s a bit like me. I like to be extreme. I’m not so much in the middle; for me, it’s always everything or nothing,” says Elzer with a chuckle. “And I think the kitchen should be a little bit like this, too. If you want to impress a guest you need to be extreme to create something that draws attention.”

“At the end of day, it's the kind of experience people are longing for,” adds Fu. “And as a designer or a chef, if we can create this kind of happiness, I think that makes our lives a lot more meaningful.”

Photos of André Fu and Olivier Elzer are taken by Pearl Yan.