In Cantonese cuisine, chicken has always had a special status among all other ingredients, and for good reason: as the Cantonese pronunciation for “chicken” and “luck” are very similar, chicken has traditionally been an indispensable ingredient for celebratory occasions. Its acceptance among diners with different dietary requirements and its versatility for use in different cooking techniques means that chefs can create a wide range of dishes with the humble protein, making it one of the best staple ingredients for Cantonese chefs.

With that in mind, it is no surprise that chicken dishes have become popular choices for gatherings and banquets in MICHELIN-recommended Cantonese restaurants in Hong Kong. Scroll down for some unmissable chicken dishes created by top chefs in the city. 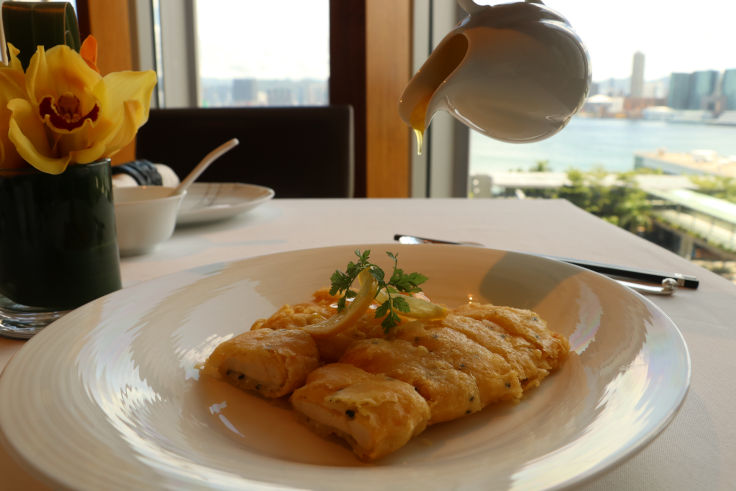 Lung King Heen offers a wide range of chicken dishes on its menu: From Steamed Chicken with Yunnan Ham, Wok-fried Diced Chicken in Kung Pao Style, to Double-boiled Almond Soup with Chicken, the restaurant's chefs are well-versed in using various parts of chicken in their recipes. Amongst all chicken dishes offered on the menu, Chan Yan Tak, the Executive Chinese Chef of Lung King Heen recommends the Crispy Chicken with Sesame in Lemon Sauce, the restaurant's signature dish. This dish features chicken breasts coated with a batter made of flour, cornstarch, tapioca flour, and black and white sesame. The chicken is deep-fried until golden brown so that the skin is crispy on the outside and yet the meat remains tender within. The accompanying lemon sauce is made of white vinegar, lemon juice and lime juice plus other seasonings. The refreshing sauce is served on the side for customers to drizzle on the chicken pieces according to their preference, so the chicken pieces can remain crispy. In Lung King Heen, as most of the chicken dishes are served either as a half or a whole chicken, which makes them especially popular with groups of more than four diners.

RELATED: What Our MICHELIN Inspectors Say About Lung King Heen

Opened by Fook Lam Moon Group under the leadership of head chef Chan Yau Leung, Guo Fu Lou has recently relocated to The Murray in Central. There is a small selection of chicken dishes on the menu, but these dishes won't disappoint. For example, the Jasmine Tea-smoked Chicken is made with saam wong gai, or "Three Yellow Chicken", a breed known for its triumvirate of yellow skin, feet and beak. The chicken is first soaked in soy sauce to give it a complex, savoury taste, and then smoked in a wok filled with roasted rice, jasmine tea and brown sugar on low heat for 20 minutes. The high fat content of the Three Yellow Chickens help them to absorb the smoky aroma very well. The combination of the tea aroma with the slightly charred taste makes it stand out amongst other similar dishes — and a hit among regulars. You can either order a half or whole chicken.

Other signature dishes include the Stewed Chicken with Morel Mushroom, in which the chicken is poached in the water that was used to soak the dried morel mushrooms, allowing the flavour of the mushroom to be perfectly infused into the chicken. Additionally, the Double-boiled Silkie Chicken with Dried Whelks is a well-known tonic that is suitable for autumn dining and must be reserved in advanced.

RECOMMENDED READING: What To Order At One-MICHELIN-starred Fook Lam Moon

One of the most celebrated chicken dishes at Celebrity Cuisine is its signature Bird's Nest Stuffed in Chicken Wings. This dish was created 12 years ago by chef Cheng Kam Fu, who was determined to create something unique and special with the two ingredients, namely bird's nest and chicken wing, that he uses all the time. After simmering the bird’s nest in superior stock, Cheng generously stuffs the chicken wings with bird's nest until the wings are plump. The wings are then deep-fried until golden and crispy on the outside.. Many diners visit the restaurant just to have a taste of this dish. Other popular chicken dishes in the restaurant include their Baked Chicken with Shaoxing Wine and Crispy Chicken.

FURTHER READING: Celebrity Cuisine's Chef Cheng On How To Chop A Whole Cooked Chicken Like An Expert 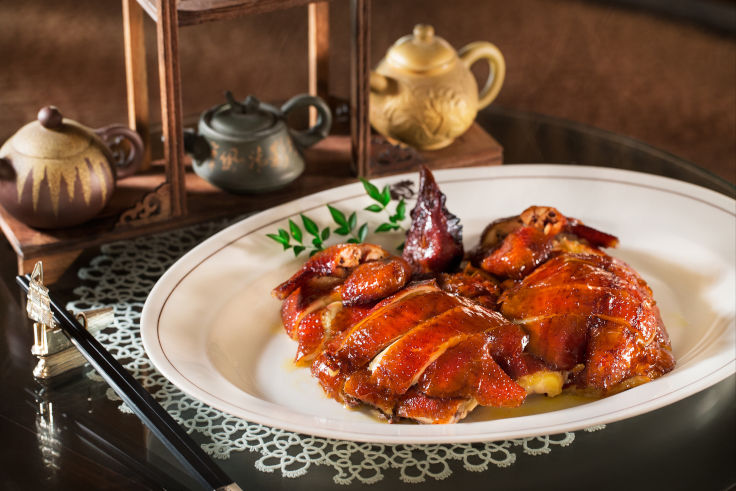 Led by chef Lam Yuk Ming, Spring Moon offers a variety of conventional and contemporary chicken dishes. The most eye-catching them is their Spring Moon's Golden Fried Chicken. Prepared in a similar method to a traditional Peking Duck, the chef used Lung Guang Chicken for its higher fat content for this dish. Deep-fried until golden brown, the chicken will is sliced table-side into paper-thin wafers. The tender and juicy chicken slices are best enjoyed wrapped in pancakes with complementary fillings such as shredded scallions, melon, cucumber, red pepper and sweet sauce. To reduce wastage, the remaining parts of the same chicken will be used in another dish of diced chicken in lettuce wrap. Both their Oven Baked Fortune Chicken and the Crispy Chicken Smoked with Tea Leaves are equally popular chicken-centric options. The former is wrapped and baked with red clay, which helps to retain all the moisture within the chicken; while the latter is grilled over a slow fire, which makes the skin crispy while keeping the meat still tender.

FURTHER READING: What the MICHELIN Inspectors Say About Spring Moon 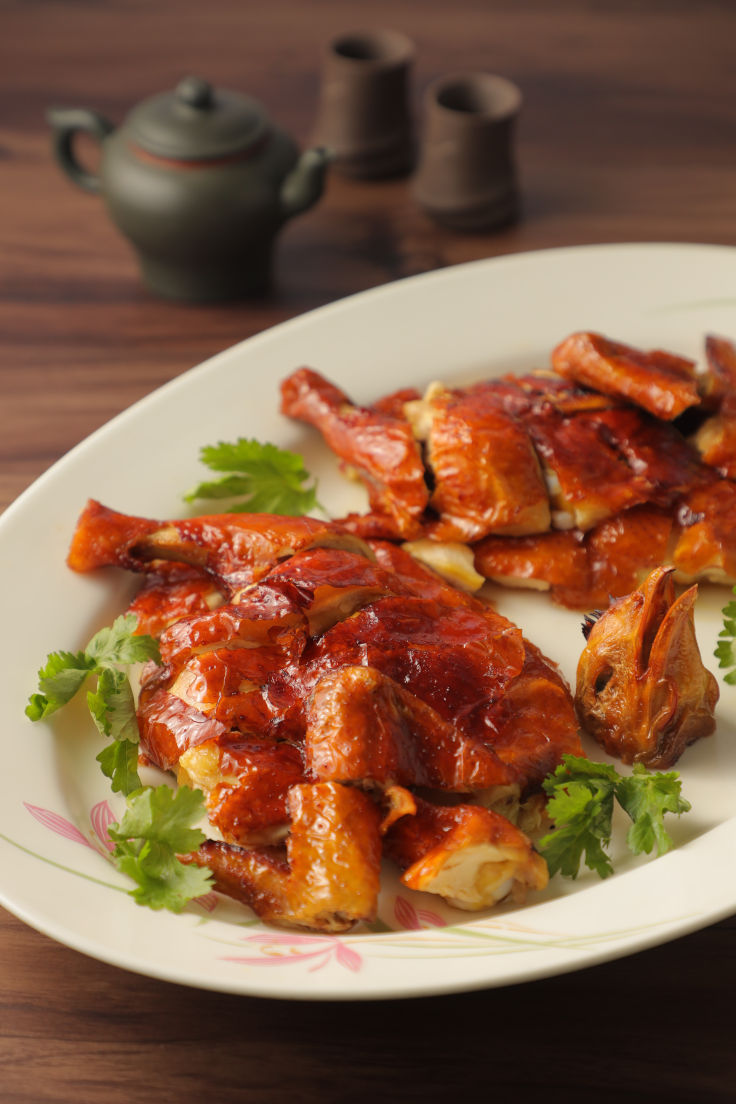 Crispy Roasted Chicken is the most popular chicken dish in Celestial Court. The trick to perfecting the dish, its chef Jack Chan reveals, is to be meticulous in every step of its demanding recipe: a Lung Guang Chicken is first marinated in spiced salt, and then blanched in boiling water. Afterwards, it is dressed with a marinade of maltose, wine and vinegar, before being hung to dry. Finally, the chicken is fully submerged into hot oil for 20 minutes until it is fully cooked, before being scalded with boiling hot oil to result in crispy, golden brown deep-fried skin. Chan also emphasises the importance of cutting the chicken neatly in order not to affect the overall experience of the dish. For something just as luxurious, the restaurant's Baked Stuffed Chicken with Black Truffle, Pearl Barley and Duck Liver is another firm favourite popular among regulars.

RECOMMENDED READING: 5 Must-Try Classic Cantonese Dishes and Where To Order Them

This story was written by Mandy Li and translated by Billy Kwan. Click here to read the original article.