With elbows-deep bowls of pasta and over-flowing grilled cheese with tomato soup dominating our Instagram feeds, it can take a thorough examination to remember the intrinsic wellness aspect of food. Rising national interest in “food as medicine” paired with rising levels of diabetes and obesity confuse the connection further. Are the wellness and culinary worlds getting closer together or farther apart?

It’s true that the average upscale urban menu would be chastised not to feature a dozen seasonal vegetables. But it’s also true that, at least in Instagram’s theatrical portrayal of it, starring roles in food culture are given to unicorn Fudgesicles, obsessively-designed cakes, downpours of Nutella, oozing plates of lasagna and an occasional kitten streaked by a rainbow light (accidentally making its way into the feed via clickbait.)

Despite the noise, food’s responsibility to nourish us is still (biologically, and relentlessly) tantamount to its responsibility to please or entertain us. In smaller circles on the food feed and in-real-life food circus, wellness influencers (like Max Lugavere and Seamus Mullen) are delivering strong messages that food is inherently engaged with health and wellness. If you hang with them long enough, you’ll start to wonder why you waited so long on that Nutella Cafe line.

Both camps have fans—that of health and matcha making, and that of milkshake and wagyu finding—and they can seem irreconcilably divided, and sometimes territorial. It’s not uncommon for seasoned foodies to hold their ground and speak with some level of disdain for the myopic nature of the “wellness world.” (Maybe because that world seems to too often, and even flippantly, ban entire food groups from its approval, often to take them back the next year.) And as for wellness gurus, the idea that top chefs are still using granulated sugar to torch their crème brûlées is enough to bring them to tears.

With so much separating the culinary and wellness worlds, it’s refreshing to see entities combining the two. Below are five mashups you could feel comfortable going to—in restaurant gear or your stretchiest running pants—despite your camp.

Cheers to your good health (and Instagram feed) this season. 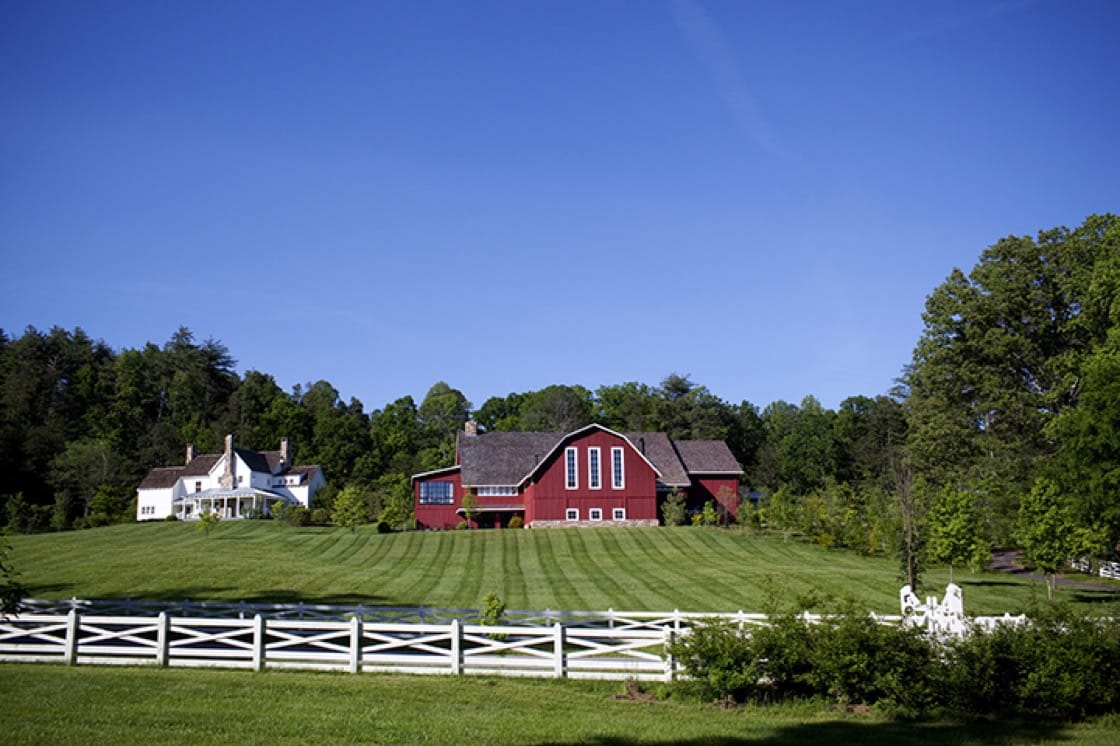 Blackberry Farm is a historic, family-owned property set on 4,200 acres in the Great Smoky Mountains. Since its opening in 1976, the estate has brought culinary influencers like chef JJ Johnson (of Henry at Life Hotel in New York and the upcoming FieldTrip) and Steven Satterfield (from Miller Union in Atlanta) to Walland, Tennessee for unique events throughout its unique four seasons.

During December and January, the farm invites guests to experience the thrill of the chase with guided fox hunting followed by elaborate feasts. Each weekend of hunting season features something unique, ranging from a “spectacular falconry demonstration” in January to a “hunt on foot featuring National Champion Octorara Beagles” in February.

Studios like the Dailey Method in Washington, D.C. offer 45-minute barre classes followed by brunch and mimosas. Students crowd in for an afternoon of socializing with all the good vibes brought up from the signature sweat. Restaurants like KBC in Dothan, Alabama (helmed by Café Boulud alum and current Top Chef competitor Kelsey Barnard Clark) also offer monthly barre-to-brunch events on the first Saturday of every month, hosting a free class in the restaurant’s lawn followed by cocktails. (Donations are given to a local animal shelter.)

Browse #barretobrunch for sessions near you. 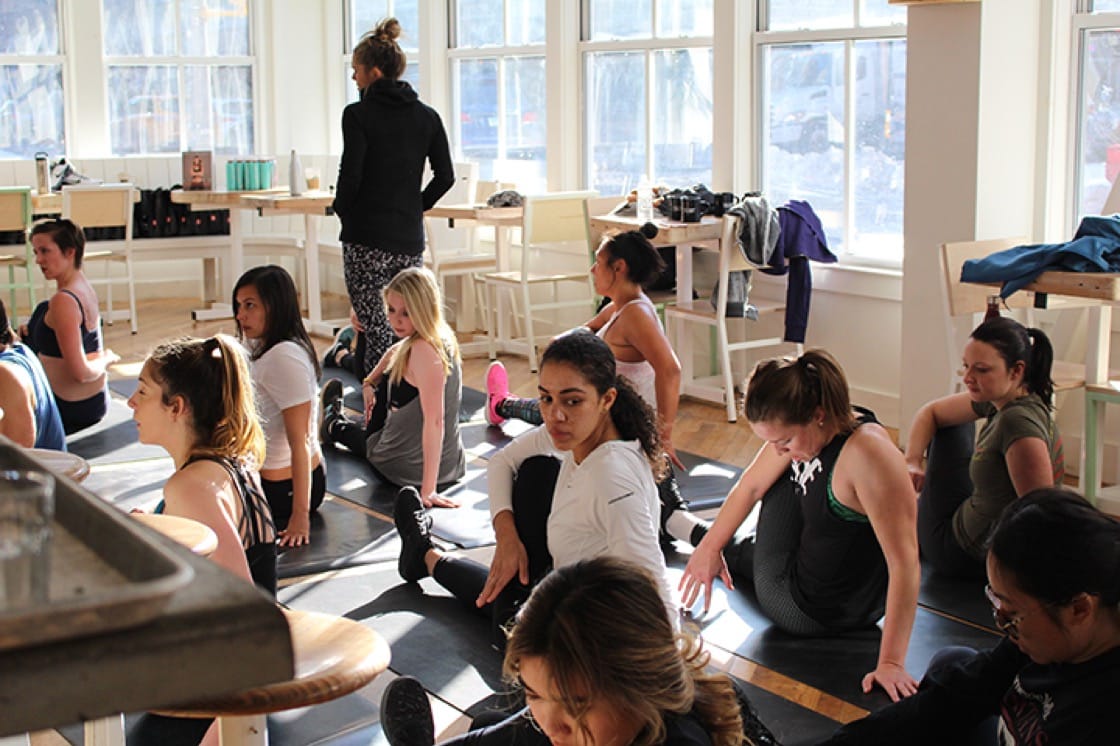 Seamore's Fit Squad is restaurateur Michael Chernow's (of Seamore’s and The Meatball Shop, who is well-known on Instagram for his gym stats) in-restaurant fitness initiative where he teams up with a top fitness influencer (like Sarah Levey of Y7 Yoga or Holly Rilinger of LIFTED) to sweat and feed a crew of young urbanites with a passion for both. For the events, Chernow and crew transform Seamore's dining room on Broome Street into a workout studio. Dynamic and challenging classes are followed by collaborative and healthy, family-style brunches featuring a unique, wellness-themed menu that then remains on the Seamore's menu throughout the month.

From Mat to Table

Organizations synthesizing yoga and gourmet, communal dining are popping up across the country, from Patowmack Farms outside of Washington, D.C., to Baton Rouge and beyond. One 2014 Chopped alum—who shot and fished the meal she made on Chopped, herself—has made it an ongoing format. Her company From Mat to Table hosts events that begin with a yoga session, followed by an educational culinary conversation and lastly a meal. Unroll your yoga and mat and pull up a seat. These events are BYOB and BYOM (bring-your-own-mat). 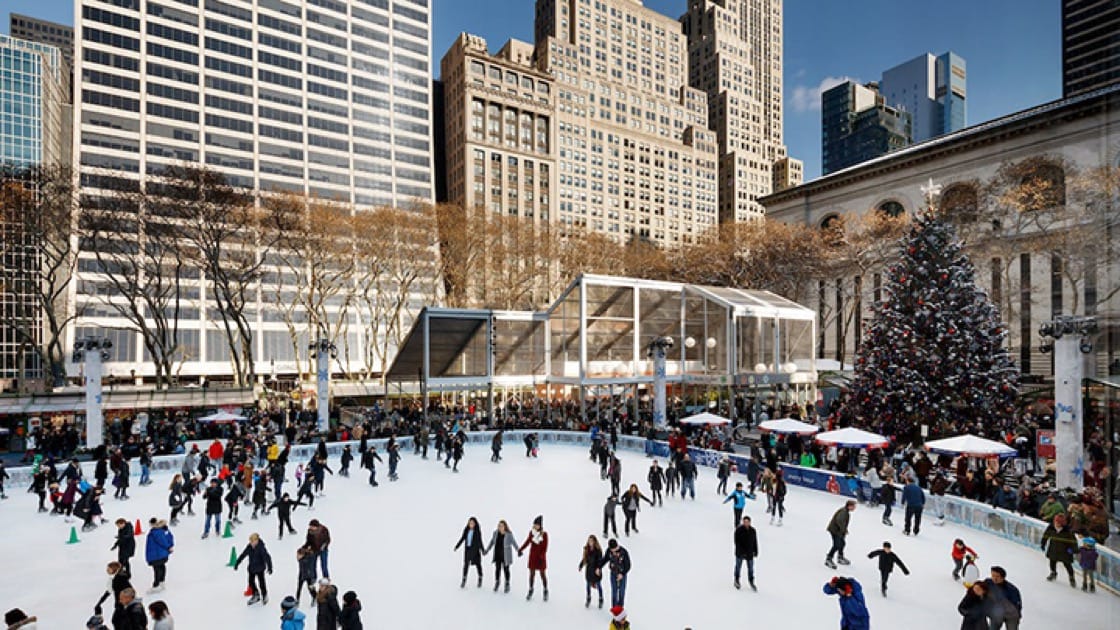 There’s no food and fitness mashup more festive than Bryant Park’s Winter Village, hosting food and artisanal boutiques as well as a 17,000-square-foot rink. (Skating is free, and rentals cost $20 or you can bring your own skates.) The village is open and operating seven days a week until January 2. The Lodge, a new rinkside bar and food hall open through March, features New York City restaurants like Mah-Ze-Dahr Bakery, Pierogi Boys, Good Stock and a s'mores bar by Squish Marshmallows as well as an outdoor beer garden for the injured or otherwise non-skating members of your crew. Whether you’re in New York already or anywhere within a hundred miles, this iconic winter activity is worth the trek.