Palm Springs, California is famous for its mid-century modern architecture, but there's a lot more on offer. There are hotels with Spanish influences, Moorish, Mediterranean, etc. And there are a handful of worthy restaurants, too; the city is in the MICHELIN Guide for the first time this year. After dinner, stay the night at one of its hotels—modern or otherwise, in Palm Springs, you really can’t go wrong.

La Serena Villas is the latest transformation of a 1933-vintage Spanish-style hotel, and while its new owners have thoroughly updated it for the boutique-hotel era, they’ve kept its stylistic inspiration intact — in fact you’d be hard pressed to find a lovelier example of colonial-contemporary architecture and design. 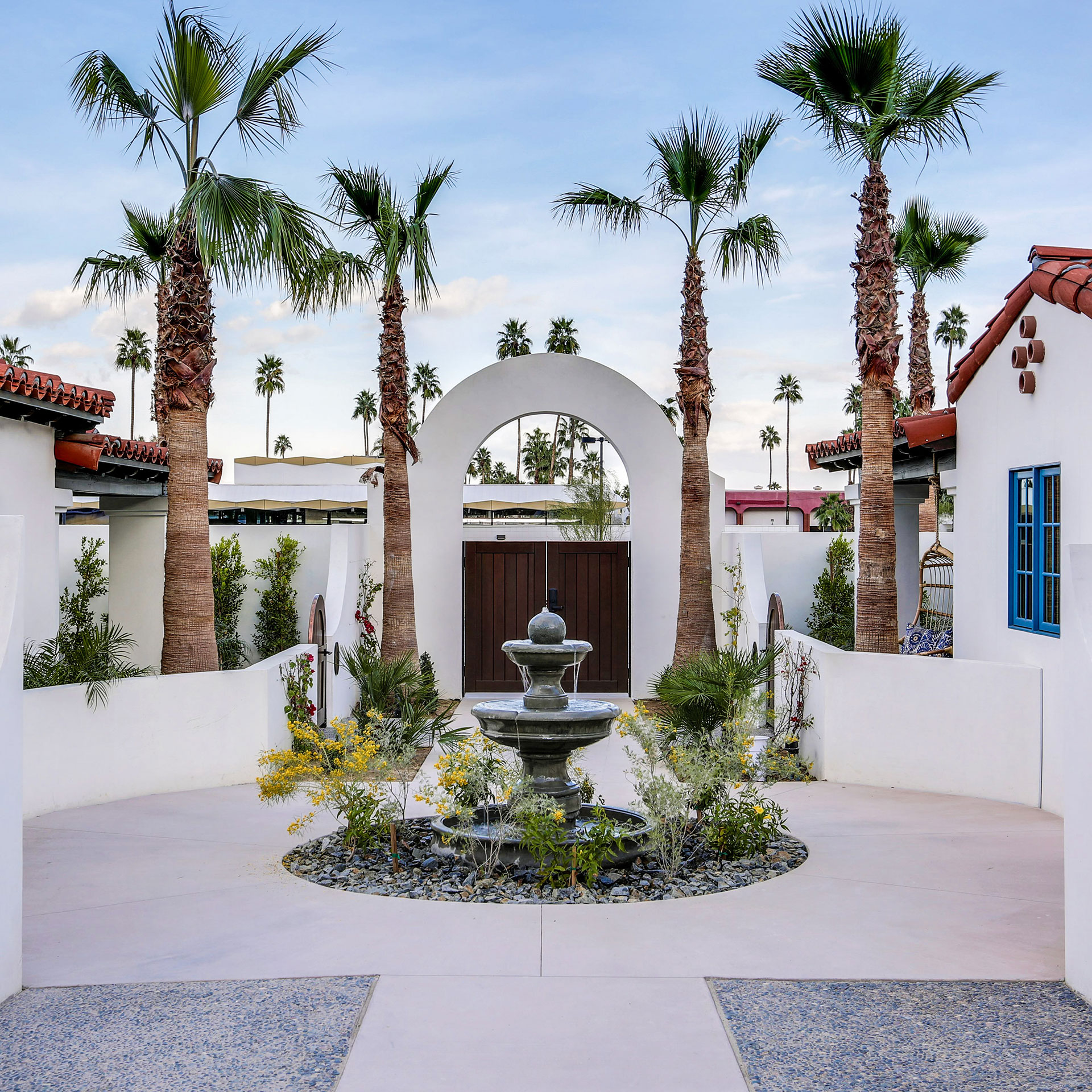 The overall mood of Villa Royale retains mid-century modernism as a primary inspiration, but the hotel is an eclectic mix of eras and styles, a tribute to the eccentrics who have always gravitated to Palm Springs. While it’s been renovated and brought quite up to the latest luxury-boutique standard, the Spanish-style architecture has been kept very much intact, now updated with street art–inspired murals and bold contemporary graphics. 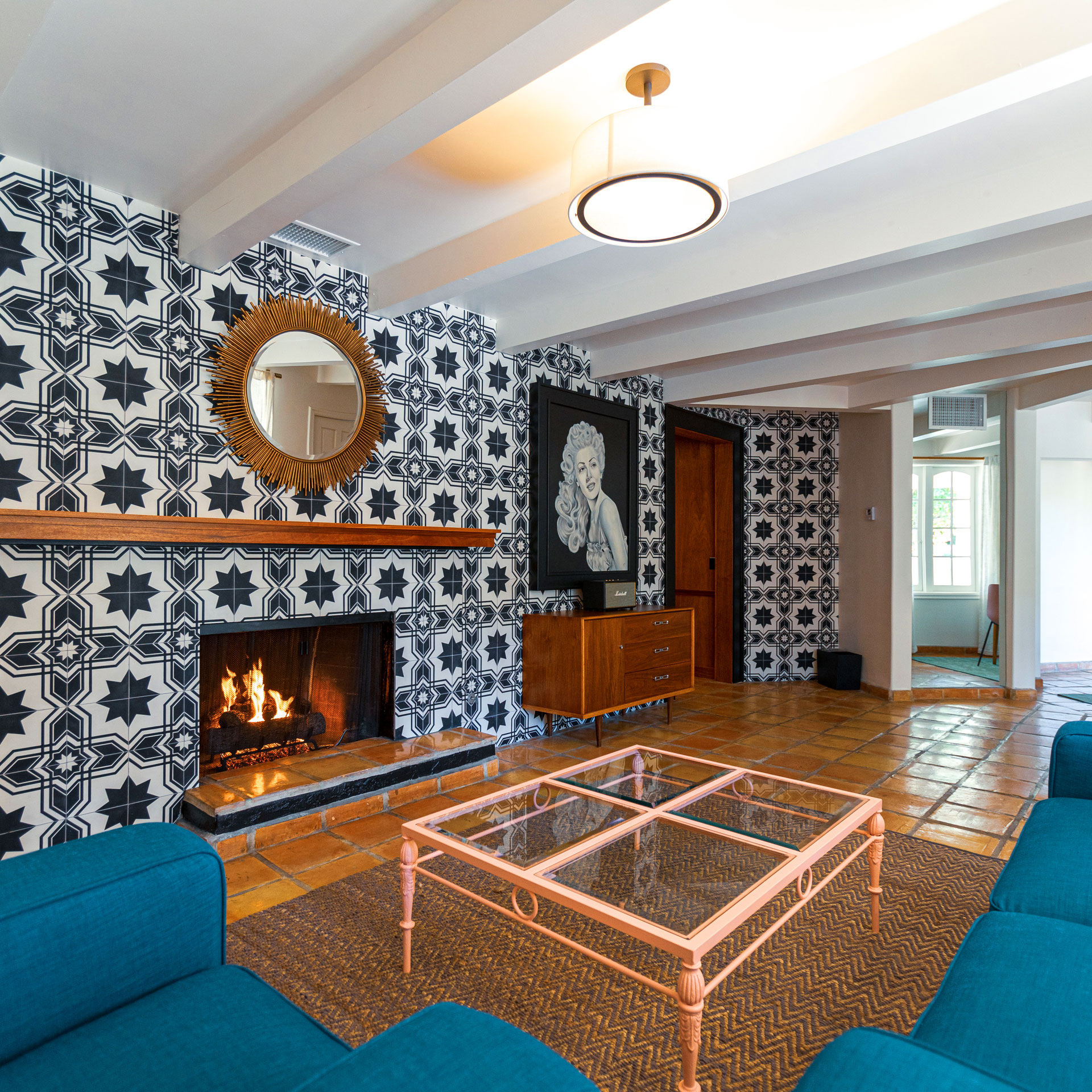 It’s been a journey for the Spanish Colonial gem that is the Colony Palms Hotel. Founded in 1936 by the (alleged) mobster Al Wertheimer, it became a favorite of the Hollywood in-crowd. Now, a couple of name changes later, the refurbished and redesigned Colony Palms is once again a luxe and stylish destination, one that consciously recalls the glamour of the golden age of Hollywood — and Palm Springs. 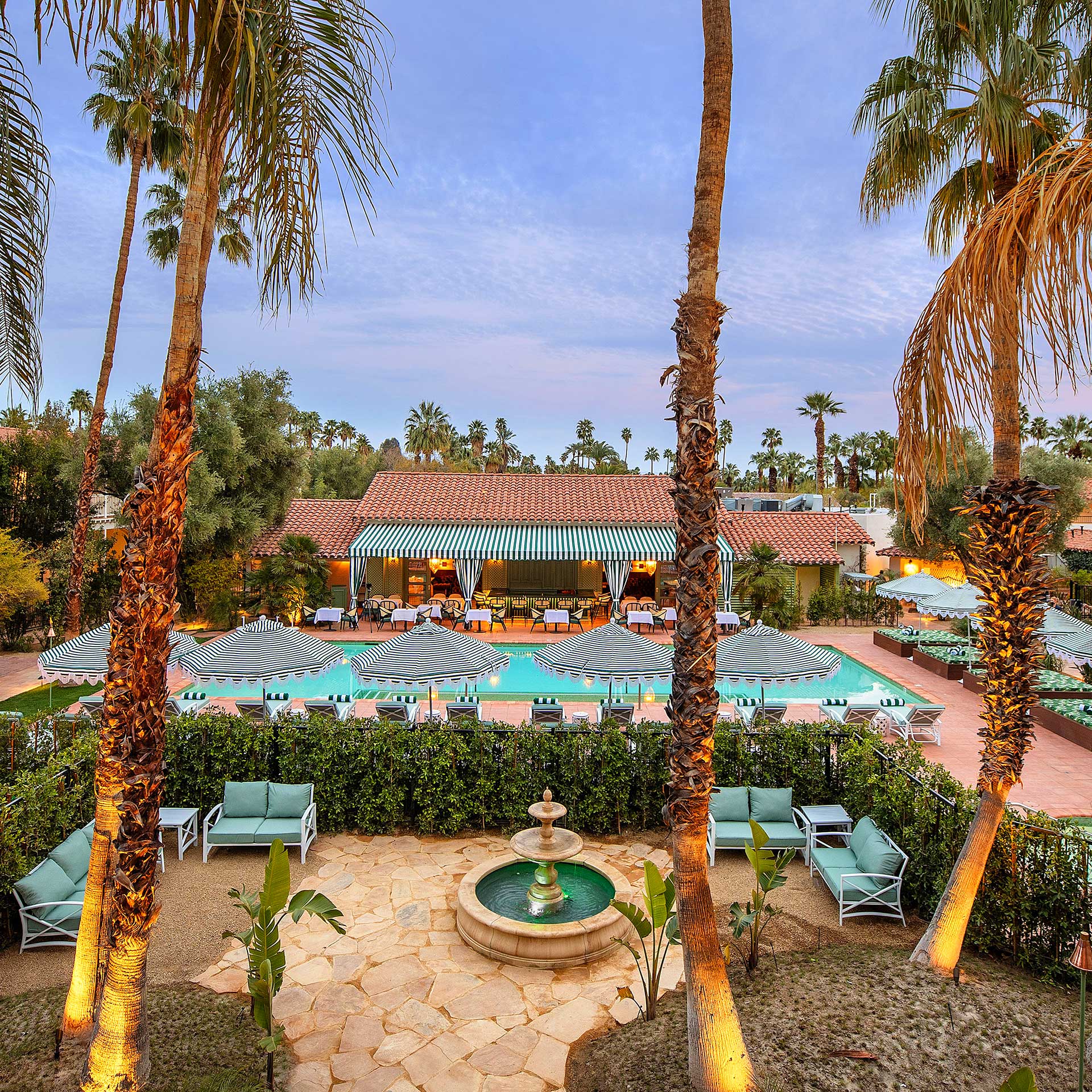 Here at the edge of town, at the foot of the San Jacinto mountains, Korakia Pensione is a highly eclectic blend, with nary a kidney-shaped pool to be found. The original 1924 Moroccan-style villa, the home of a Scottish painter, was given a Greek makeover sometime in the Nineties; and the two houses next door, a Mediterranean villa and a Spanish-style adobe house, were added soon after. 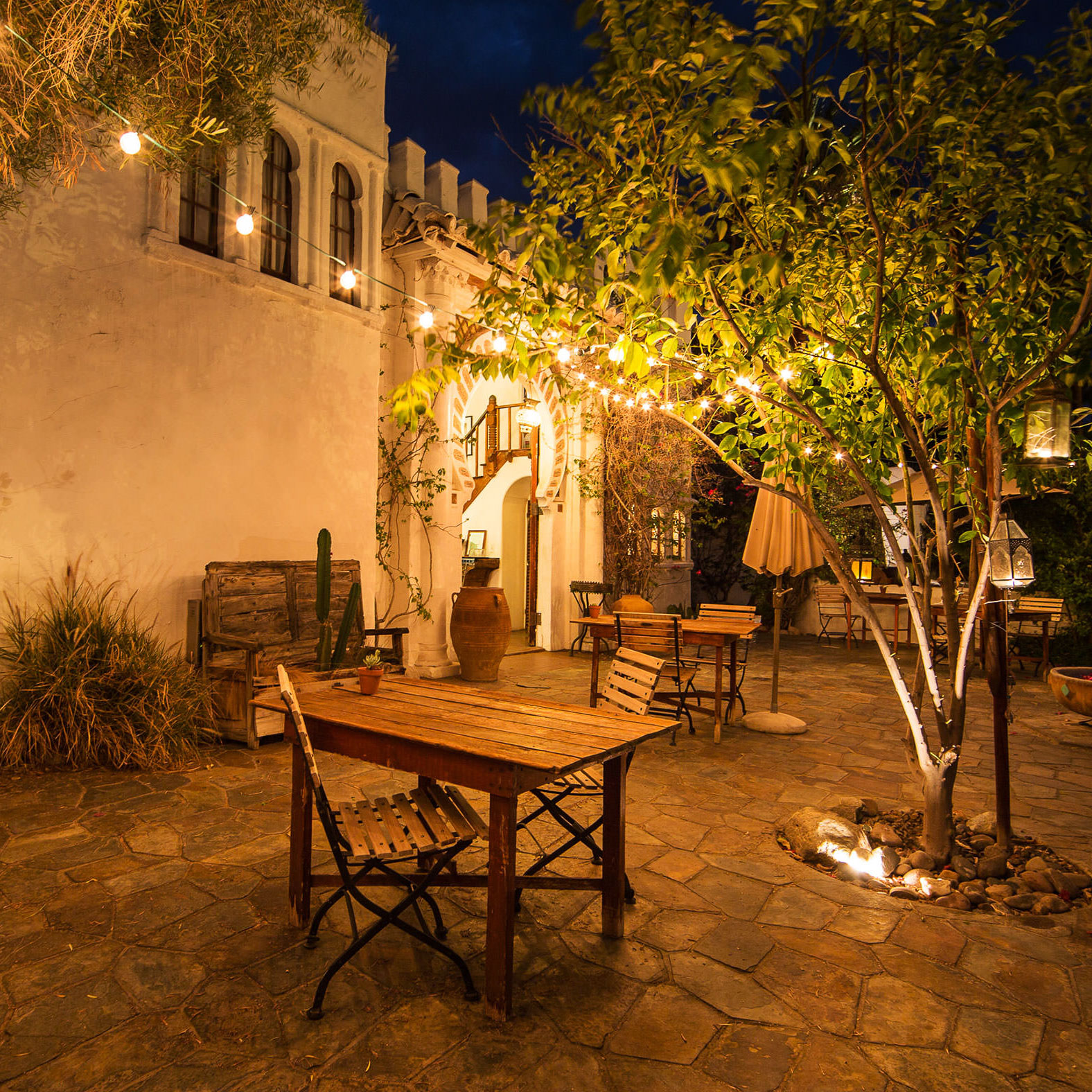 Sparrows Lodge is not aiming for the mainstream. Recycled from the Fifties and refreshed for a style-conscious clientele, this woodsy hideaway is the kind of place where people play horseshoes, swing wooden tennis rackets and read books by their private campfires. It’s like a dreamy hipster version of the summer camp of your childhood — and it proves there’s certainly a place for a rustic-chic ranch in this corner of the desert. 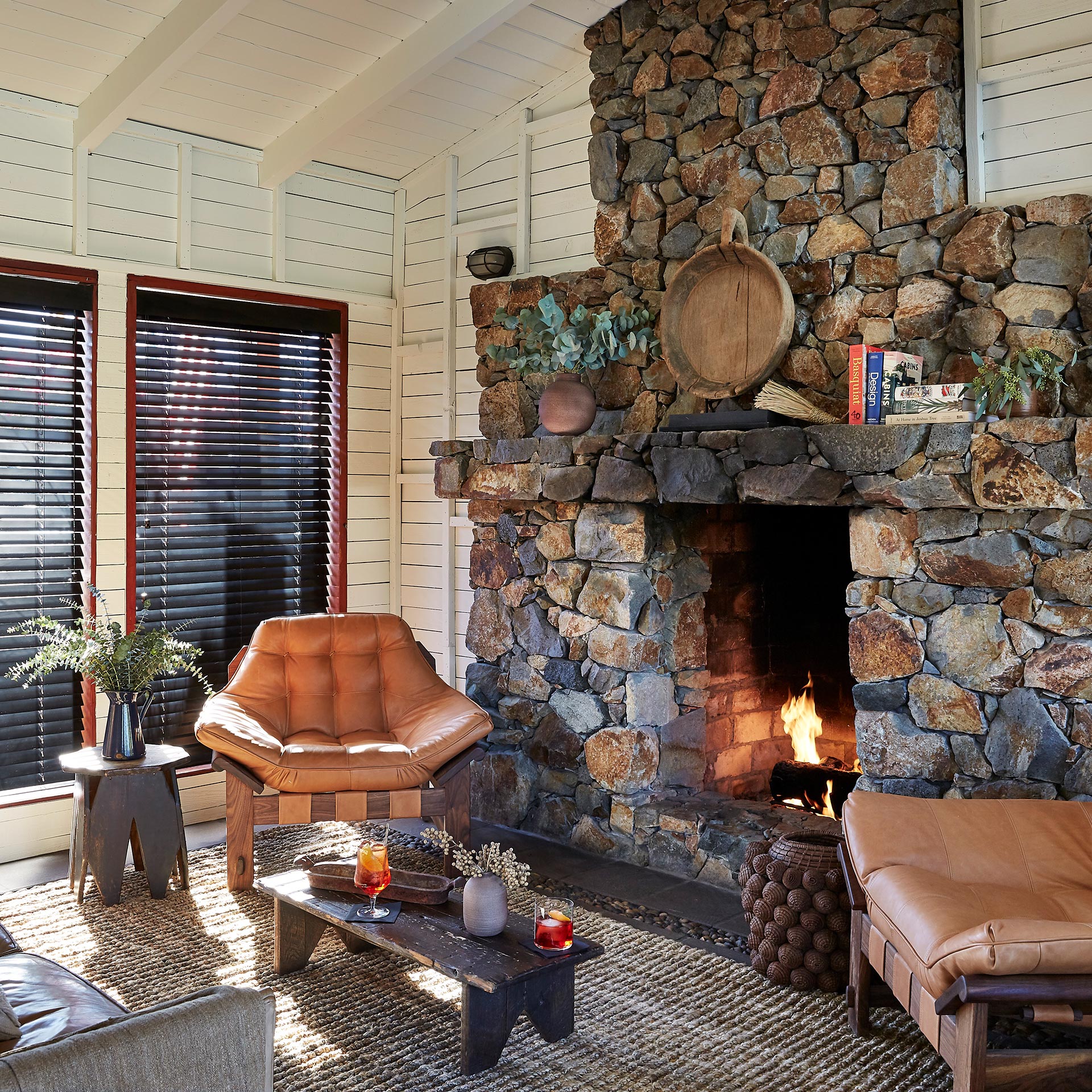 One struggles to find a better word than “funky” to describe the sensibility at Ace Hotel & Swim Club, a repurposed roadside motor inn. The hotel is vintage but not retro, with a celebratory respect paid to the past rather than an ironic arched eyebrow. And sustainability here is not a slogan or a mission statement but an organic side effect of the use of second-hand furniture and surplus hardware. 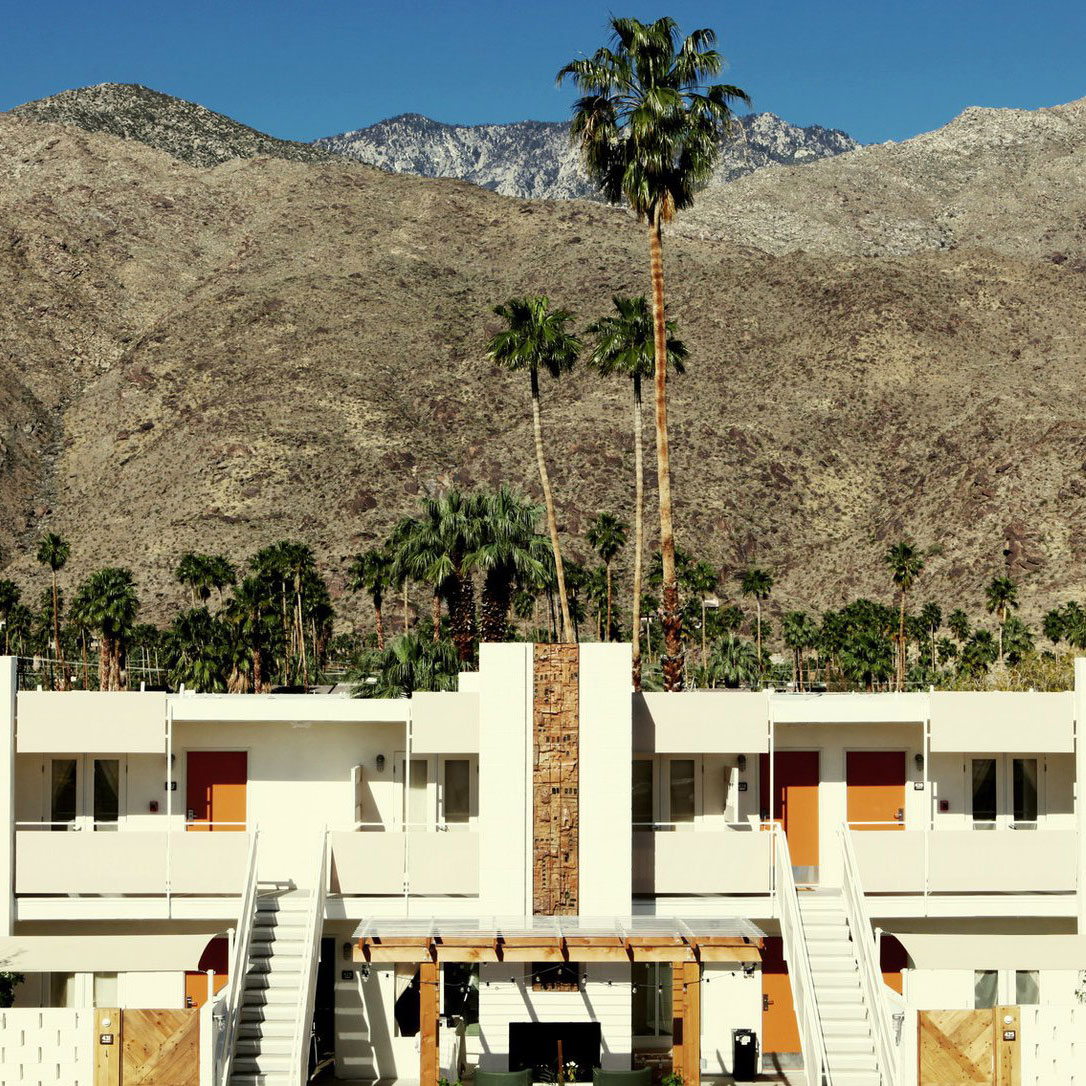 The Parker has a long history. It was once Gene Autry’s Melody Ranch estate, and then the Merv Griffin Resort. After a rethink by lifestyle designer Jonathan Adler, it has a whole new style, one that’s difficult to pin down. It’s been described as “hippie chic,” but its promiscuous blend of periods and references alternately recalls the Mod Sixties, the feel-good Seventies, and the classic Rat Pack vibe that Palm Springs is known for. 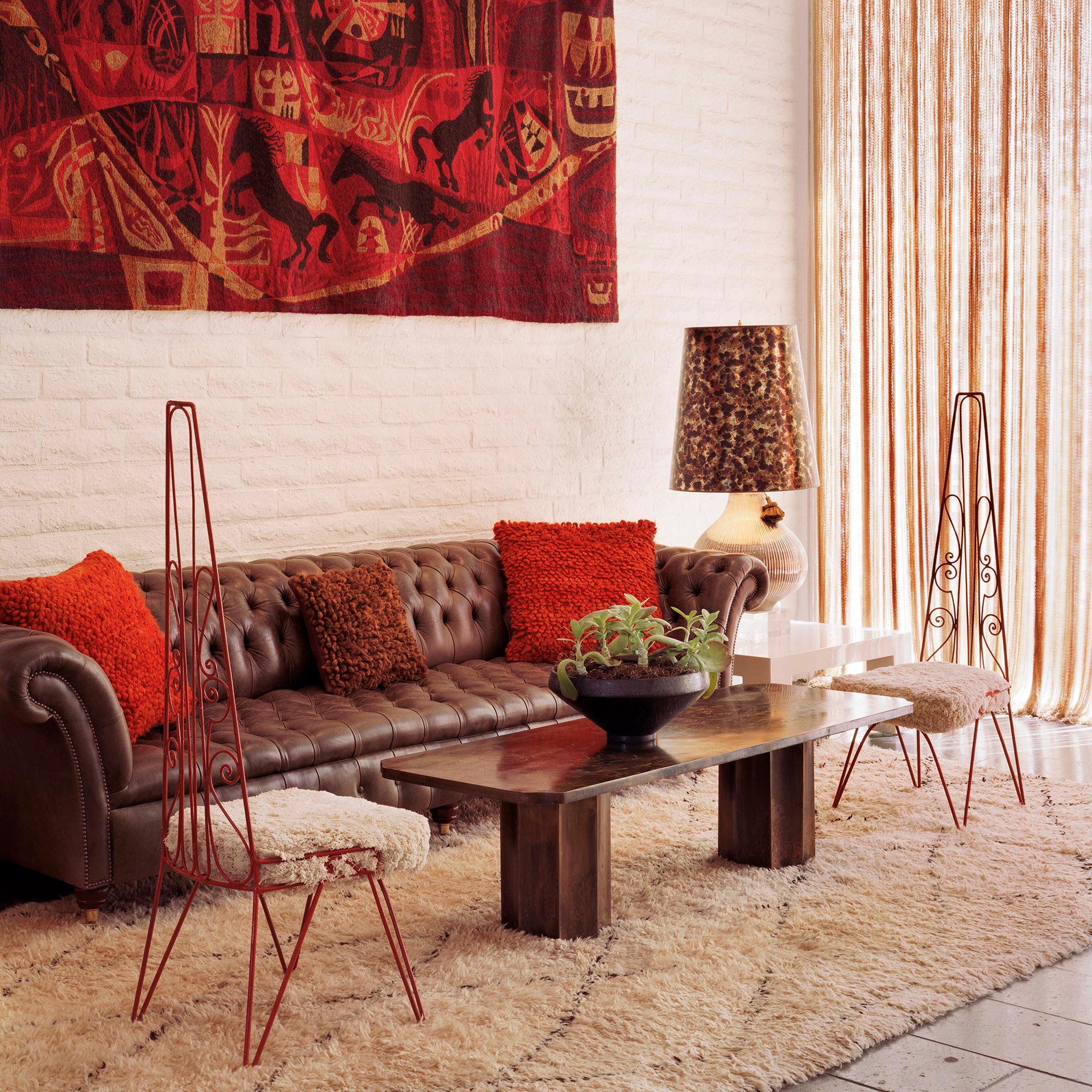 This place has seen it all, from Joan Crawford and Errol Flynn to American presidents and one King, but the Avalon is no Rat Pack wax museum or Jetsons-modernist fantasy — this hotel’s hacienda-style Spanish tile roofs and whitewashed stucco walls hide stylish interiors, a modern take on the Hollywood Regency style of the resort’s golden age, decorated in a smart contemporary palette of blacks, whites and yellows. 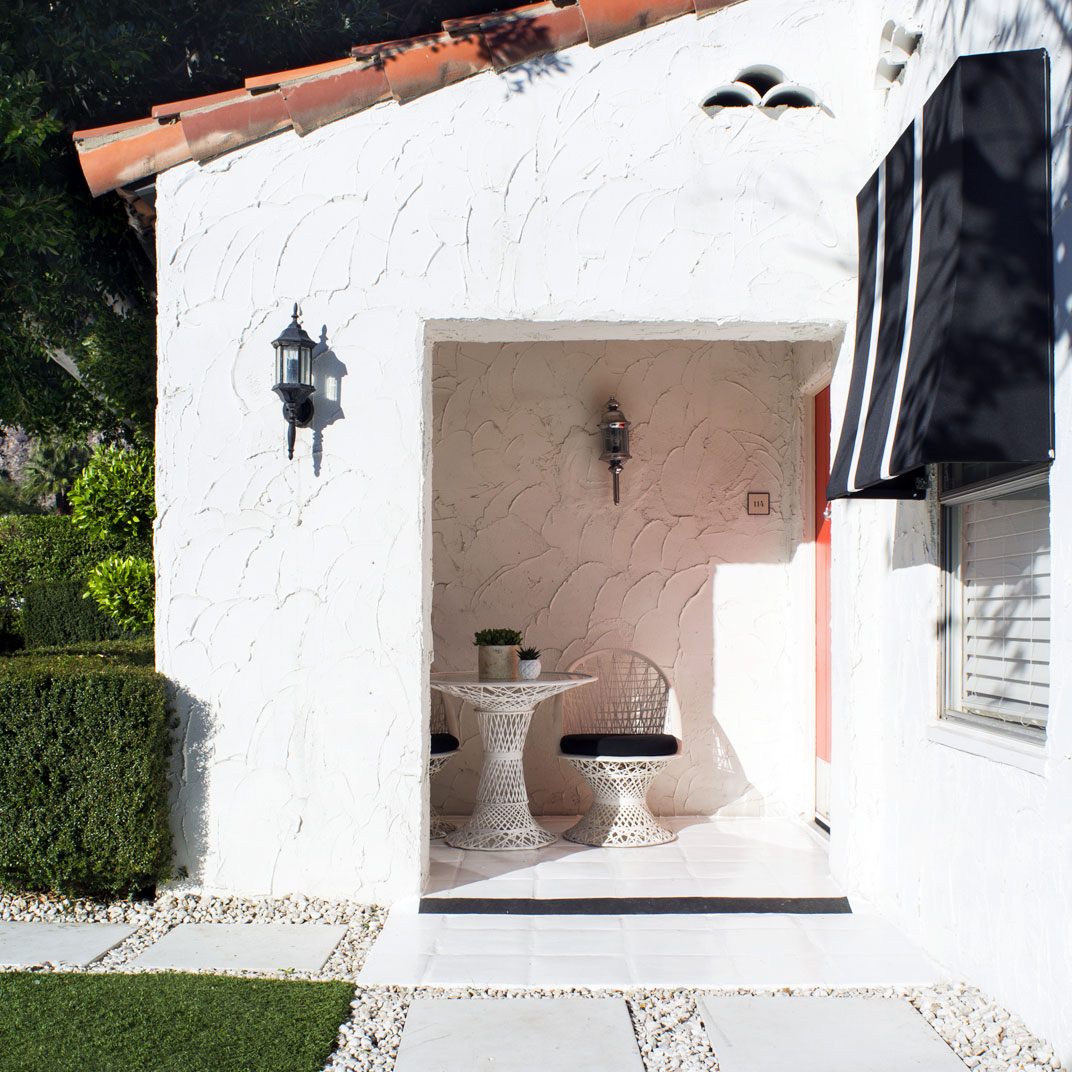 The Sands is a thorough reimagining of the 1950s-era original, updated by designer Martyn Lawrence Bullard into something very contemporary, whose mid-century references are conscious rather than inherited and whose Moroccan influence gives it a visual identity all its own. The rooms, just 46 of them, are given plenty of space to spread out. The spa, naturally, plays up the Moroccan angle, and the pool, with its cabanas, is a delight. 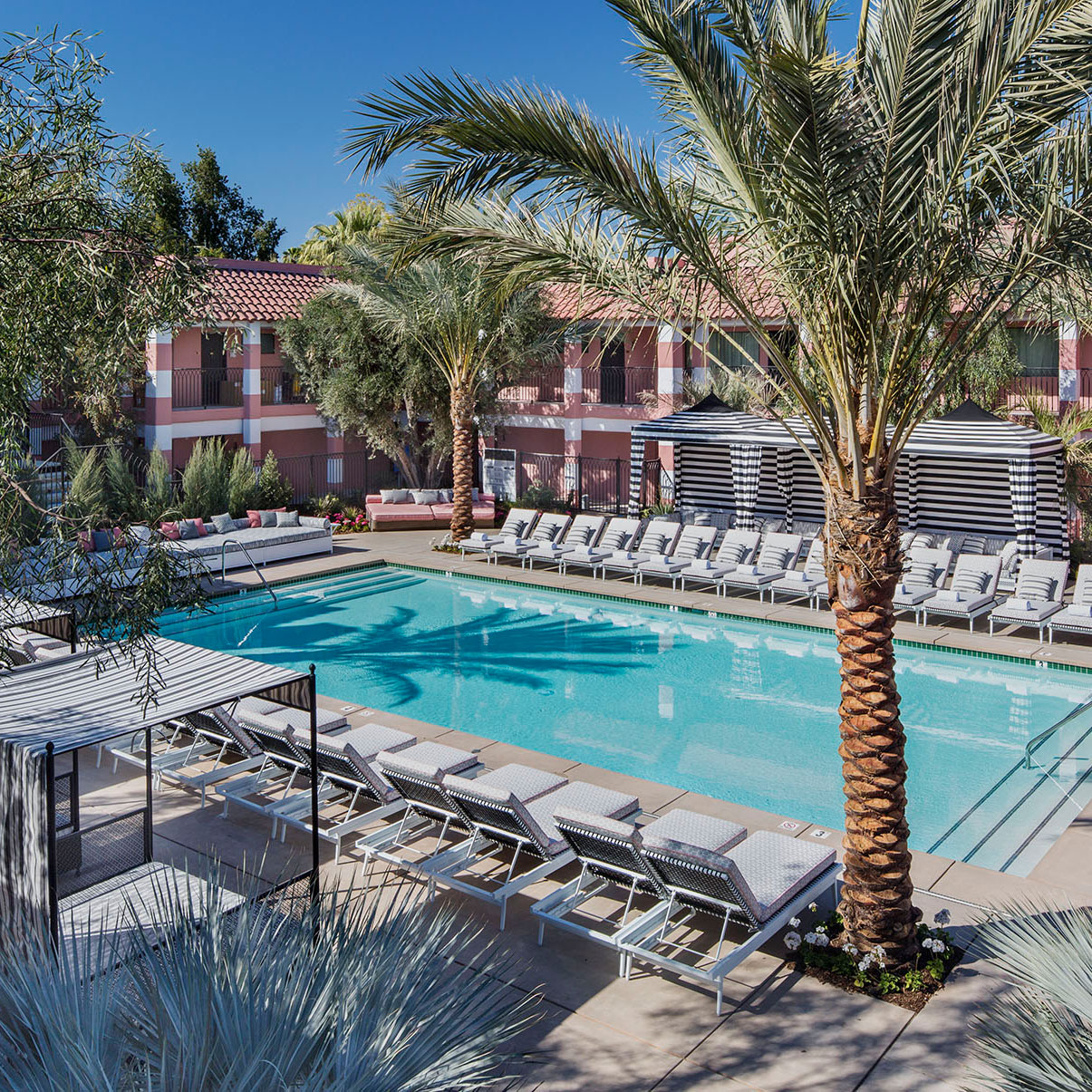 It’s safe to say Dive is the only place in Palm Springs that you’ll find the spirit of 1960s St. Tropez. In keeping with its inspiration, this 11-room hideaway is glamorous — and its sunny colors and eccentric, bohemian interiors achieve a uniquely Mediterranean vibe. The pool is a charmer, the garden and orchard are heavenly outdoor spaces, and the atmosphere throughout is nothing short of restorative. 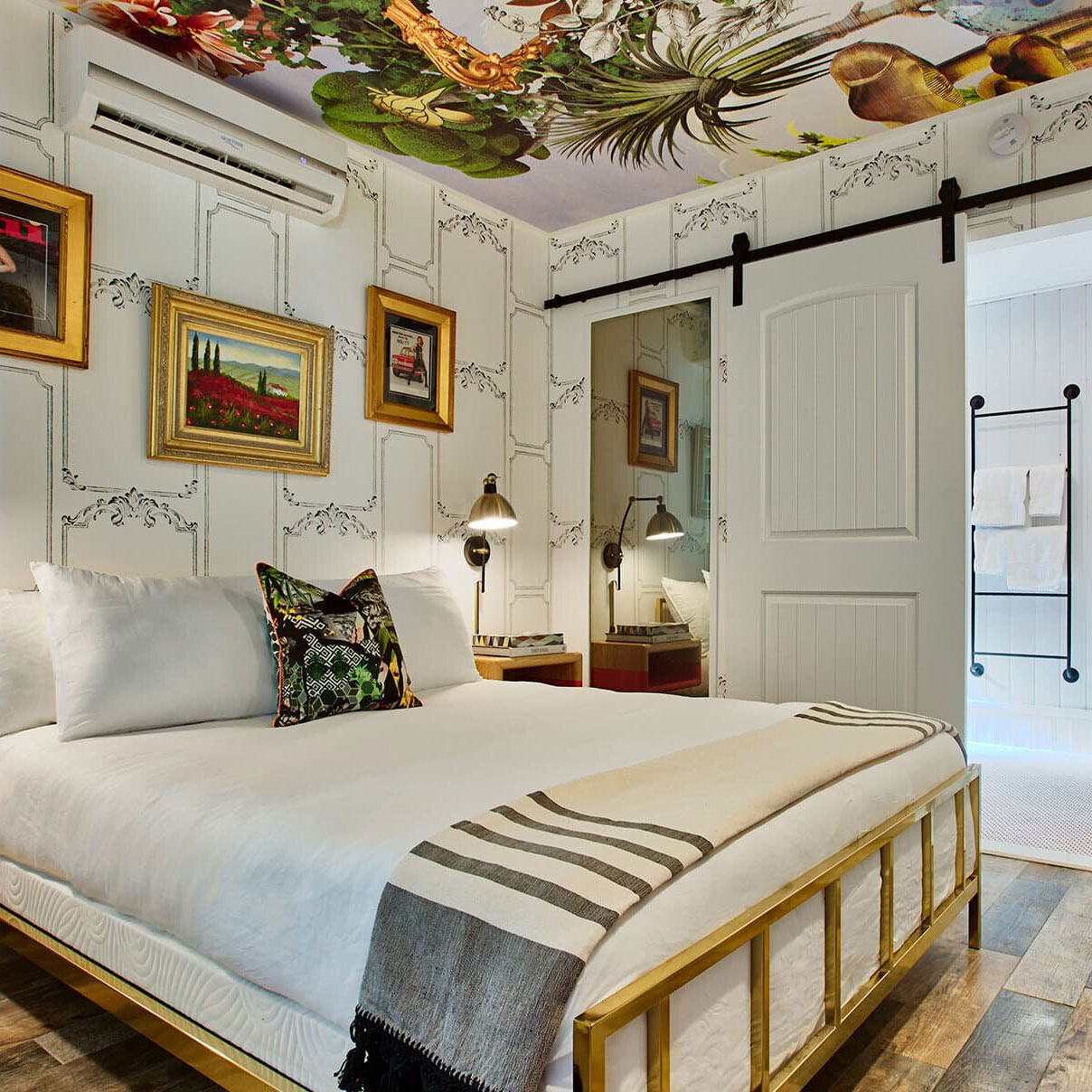 Holiday House first opened its doors in 1951. Original amenities included a shuffleboard court and English bicycles for guests. Much of its midcentury character remains. But now, thanks to the design overhaul, it caters to the whims of modern travelers — and art fans. Yes, that’s a David Hockney painting, and over there, an original Lichtenstein print. The hotel also has works by Herb Ritts and Mr. Brainwash, plus a Donald Sultan sculpture in the garden. 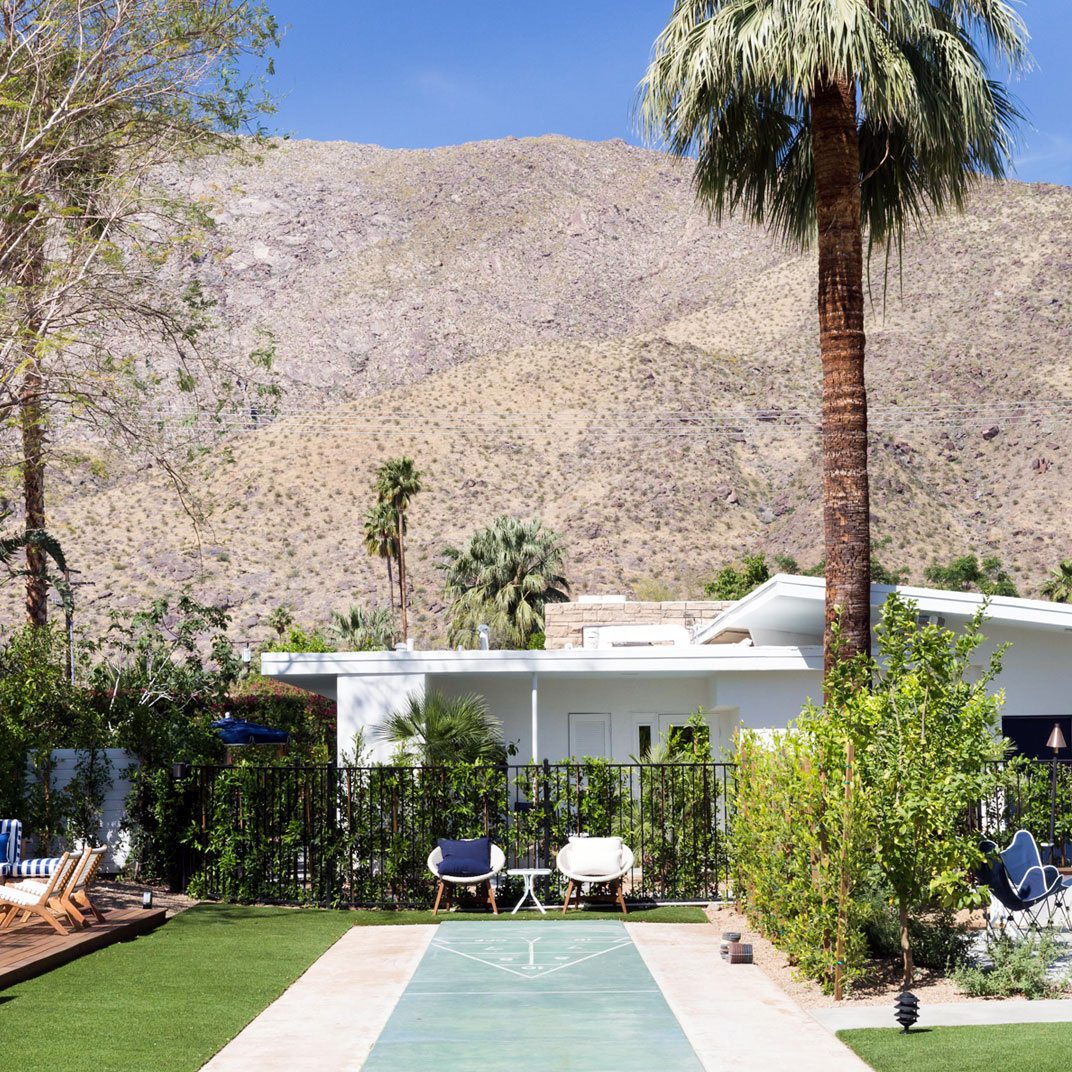 It’s more rare than it should be in Palm Springs: a stylish, comfortable adults-only refuge that’s relatively easy on the budget. Les Cactus is named for a French song from the Sixties, and though its design is of recent vintage, it captures the playful side of the decade that inspired it. 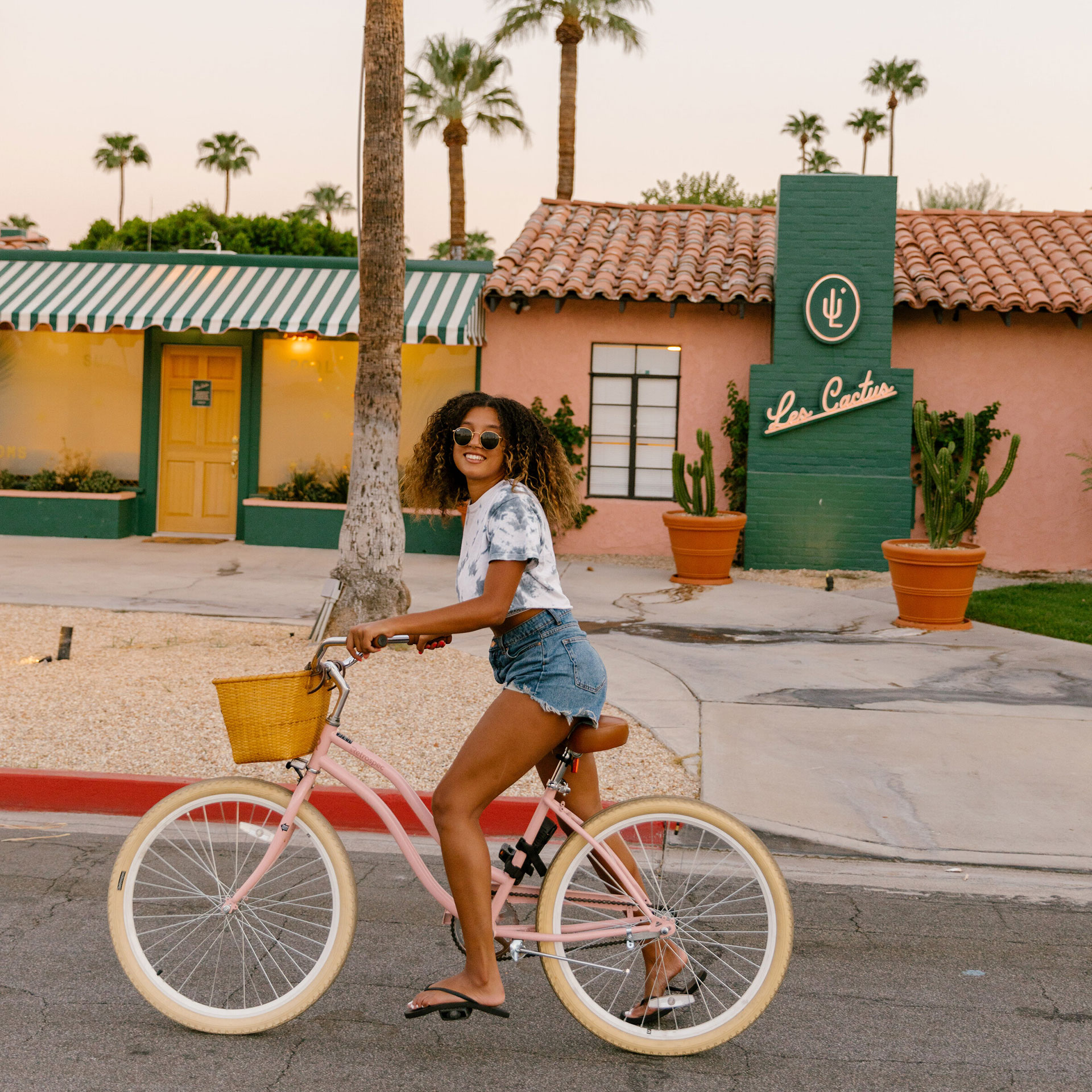 This Rat Pack–era institution is Spanish Revival through and through, and while it’s been brought very much up to date, the atmosphere is still steeped in Old Hollywood romance. The rooms and suites are elegant above all, with plenty of historical detail alongside the expected modern conveniences; some come with patios, courtyards, and/or fireplaces, and they’re all refreshingly unique, owing to the twists and turns of the existing floor plan. 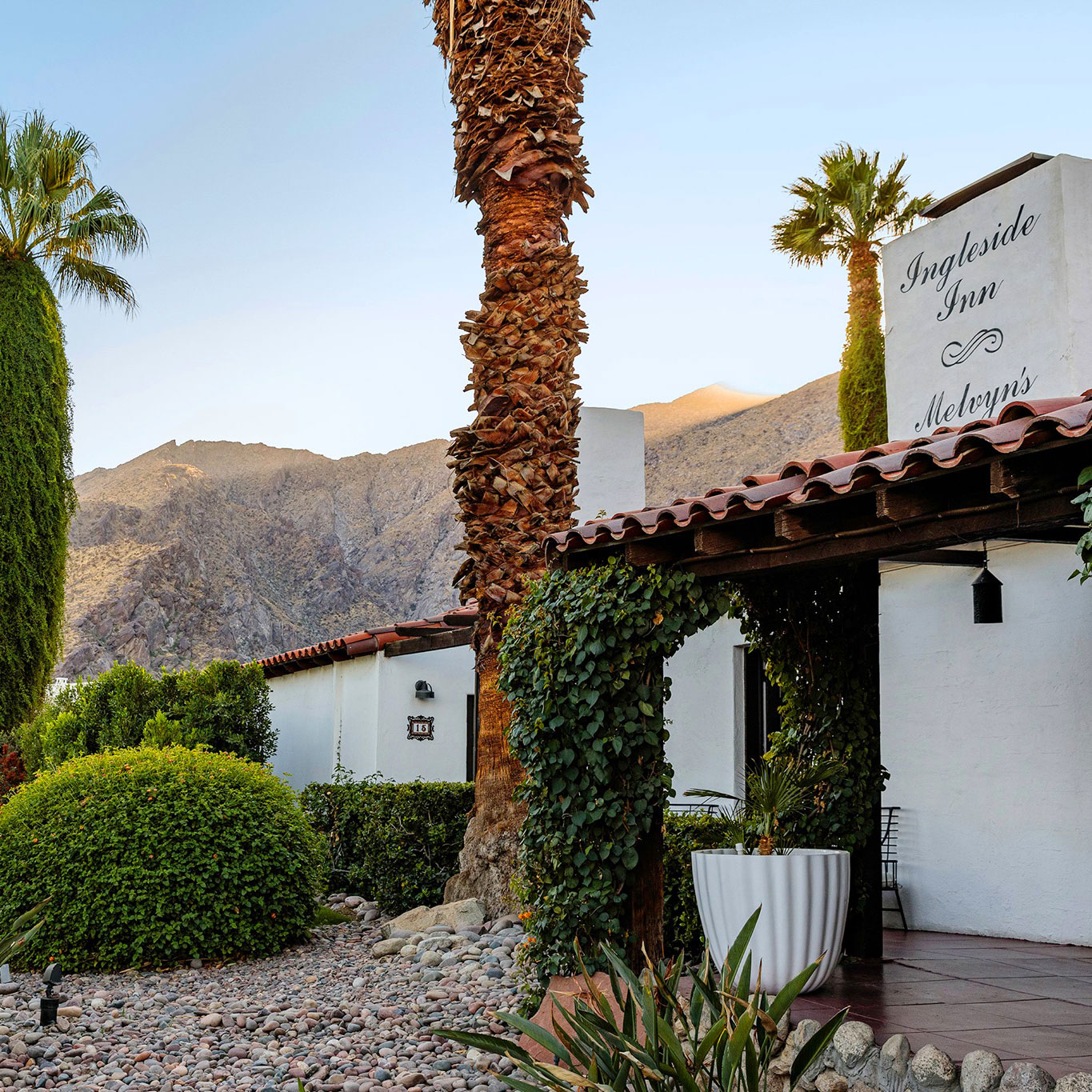 Arrive Palm Springs is a Palisociety venture, an adaptation of the group’s accessibly glamorous look and invitingly sociable atmosphere to a modernist-inspired compound in the Uptown Design District. The architecture is distinctive, and traces its heritage to the local style, but you wouldn’t call it retro — this is no space-age throwback, but pure 21st-century Palm Springs. 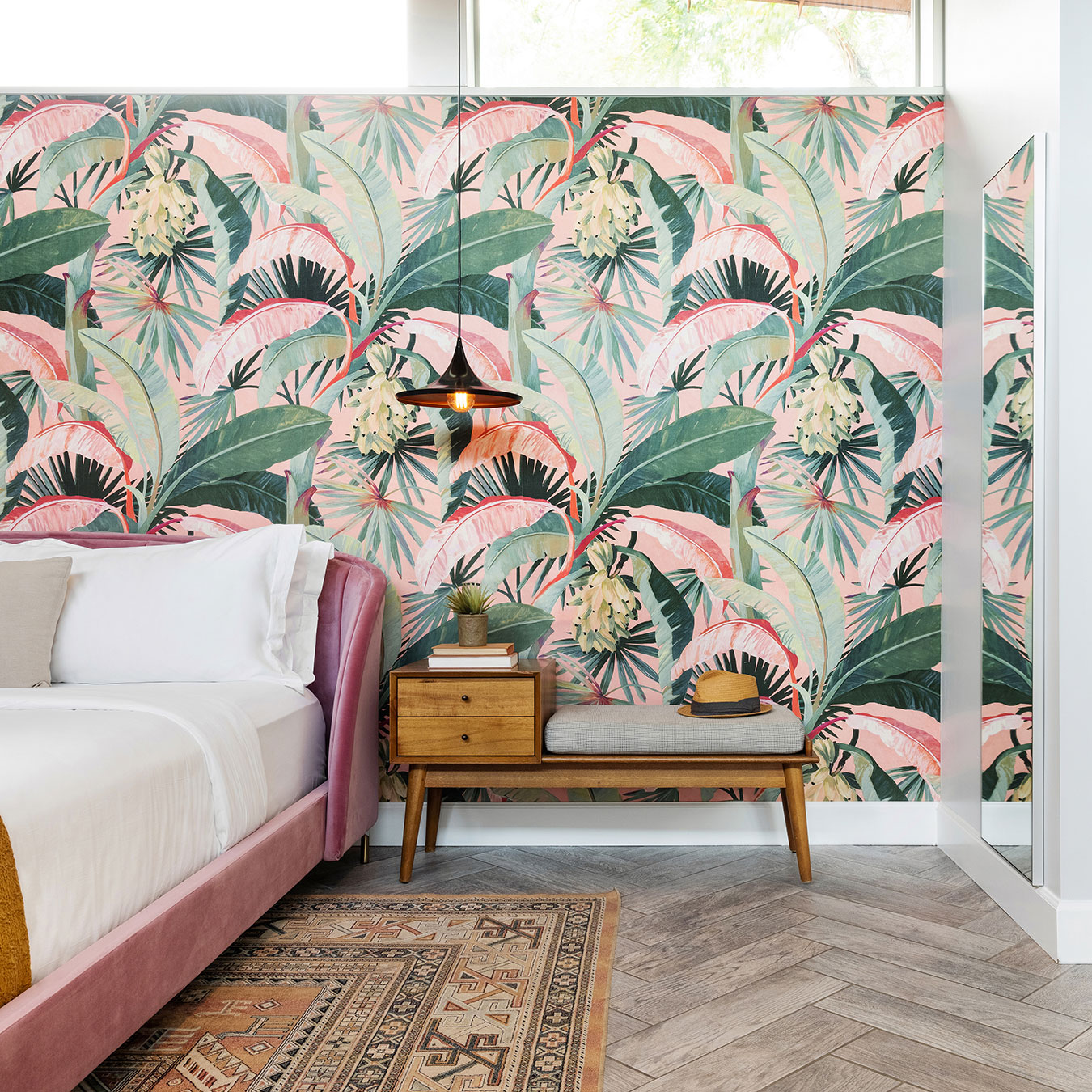 Hope Springs references two aspects of classic Californiana at once — on the one hand, the mid-century modernist roadside motel, and on the other, the natural hot springs that are the hotel’s main attraction (the “springs” in Palm Springs is there for a reason). After extensive renovations it’s now just ten pared-down minimalist-chic rooms, which adds to the private-retreat aspect of the place. 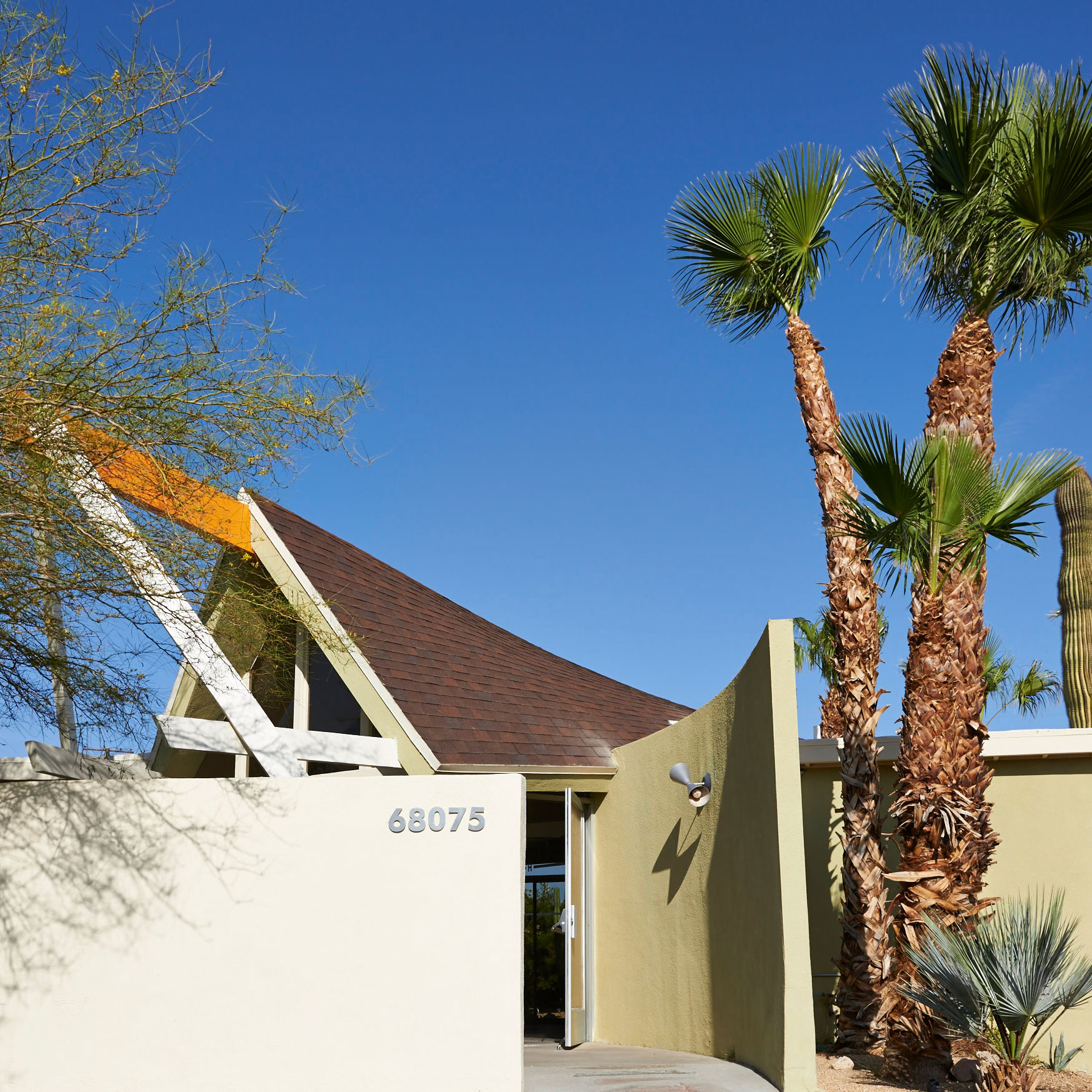