Nouri’s Ivan Brehm Puts The Heart Back Into Fine Dining

The chef of the one-Michelin-starred restaurant erases the boundaries between the kitchen and the diner, adding transparency and warmth to the fine-dining experience.

The chef of Nouri, which has just been awarded one Michelin star two months ago, welcomes diners with a restorative Bread and Broth, which symbolises the breaking of bread and provides the comforting nourishment of soup.

The broth, which is served as a shot, is made with seven types of vegetables and, as Brehm explains, “the liquid that lives inside the vegetable gets extracted through steam, so it’s concentrated and super nutritious”.

“It’s to remind people that they’re here, in a restaurant. When they drink it, they feel the effect of the broth. The other part is the breaking of the bread — only one slice of bread is served for two people so that the diners can break bread together. We notice how it changes the conversation and the dynamic between guests. Symbolically, the meaning of breaking bread, doing that makes us feel this is very good."

Clearly for Brehm, the idea of nourishing guests goes beyond the physical and extends into the mental or psychological aspect as well. The Bread and Broth concept has also made the anonymous inspectors from the MICHELIN Guide Singapore sit up and take notice. 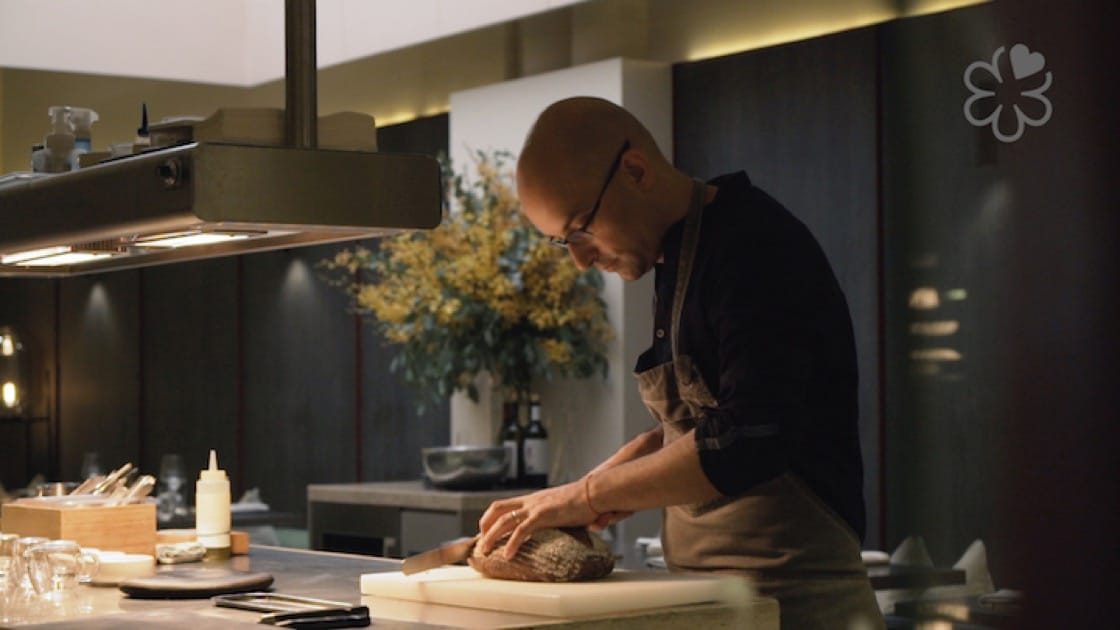 More Than Nourishment In Nouri

The creativity of Brehm, who left Bacchanalia to open Nouri last year, extends beyond just the innovative dishes to even its name.

“I was so tired of trying to find the name. I told my wife and she was, like, ‘You can name it this, name it that, name it ‘Nouri'… So she was the one who mentioned ‘nouri’. It’s a Latin word for nourishment, things that you derive sustenance from. ‘Nouri’ in Korean means ‘planet’, while in Persian, it means fire in the sense of consciousness. It was very relevant to what we wanted to do with our restaurant: to bring some kind of mindfulness to eating, to people’s experiences.”

His honest approach to food and running a restaurant naturally gave him the idea of opening up the kitchen and its processes, so that the restaurant, dining hall and kitchen become one. With an open concept, there are no boundaries and no space delineations, making it a pretty daring and forthright move.

“Food is everything to me. The way I explore life and explore the world is through eating. It’s more than food — it’s the act of eating. The food is super important but so are the people, the space and the conversation as well." He adds that he wants to remove the need to pretend, or what he terms the “glove”. 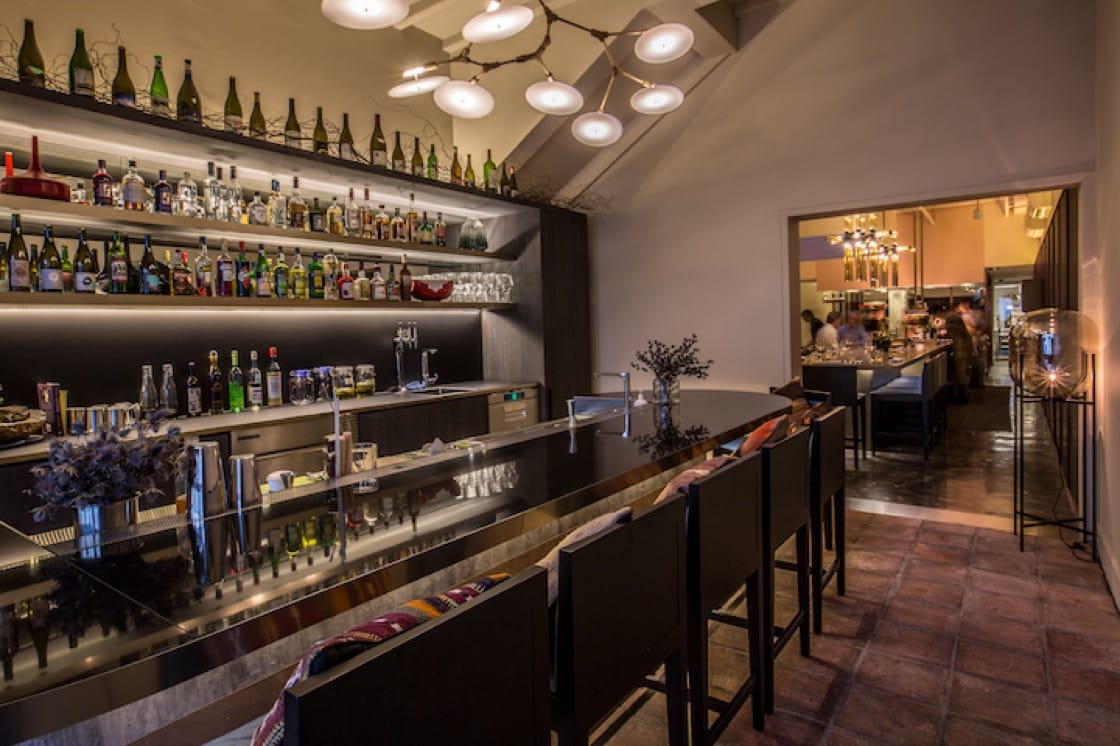 “The idea was take away one layer of separation between the diner and the people preparing food,” he elaborates. “In a normal fine-dining concept, you always try to coax the customer into thinking he is having something exclusive just for him. ‘The chef recommends you…’ kind of conversation.

“The feedback I always get from guests is that they don’t necessarily enjoy a very good fine-dining experience anymore because it just feels cold and distant,” he says, adding that by changing the way fine dining is presented, it is bringing about an honest conversation.

“So opening up the kitchen like this was really with the intent of doing this, and also finishing with the master-servant [dynamic] and creating a very level-eyed conversation where I happen to be cooking for you but we’re just two people. You’re a guest and I’m a host. And I think, for guests, they appreciate that.”

In the kitchen, the Brazil-born chef seems to be as much a doer as he is a thinker. He has given much thought to the experience that can be laid out on the table, and his approach is both experimental as well as philosophical.

“The way I see food and the dining experience — It’s about being willing to question and keep asking questions, and not settling for ‘this is how you cook a fish at this temperature’. Be okay with your shortcomings and failures. When you make a mistake, a door opens for you to make a greater success further down the road.” 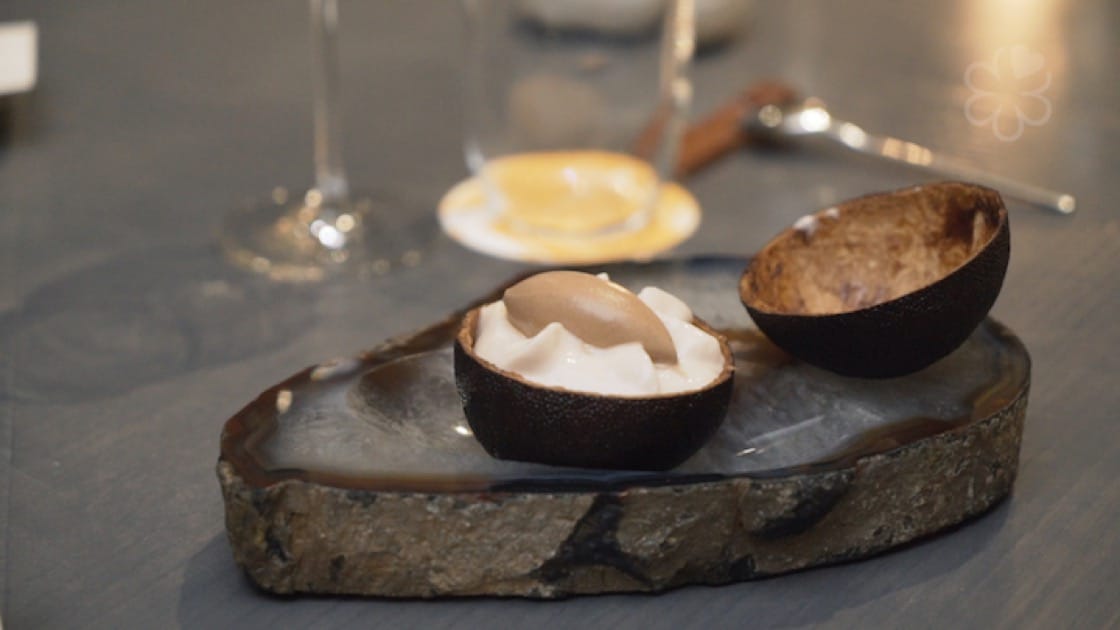 His views have been heavily influenced by the four years he spent as Development Chef under Heston Blumenthal at his Experimental Kitchen at The Fat Duck. With his own experiments, Brehm religiously documents these creative processes for future reference.

He lets in that, a while ago, he did a little team experiment by blindfolding the chefs and wait staff. They ran a 35-minute mock service — there wasn’t actual cooking, but there were liquids and crumpled paper to resemble food — with mock guests, one of whom was his wife, who was purposely tough on them,

“The idea was to convey to people that you have to use the entirety of your senses to communicate. We want to be more like ants and less like lions. We took out the visual element because there is more than the eyes.”

As you can expect, the dishes he offers are derived from his life experiences. For example, his dessert course purposefully touches on bitterness.

“We pay a lot of attention to bitterness. Everywhere I’ve worked in, it’s the taste that is somewhat forgotten. My dad used to really like liquorice. I guess it had an impact on me. Over time, you start to realise it has a crazy impact on fat as a taste; the interaction it has with salt and sugar. You can change dishes through the use of deliberate bitterness.” 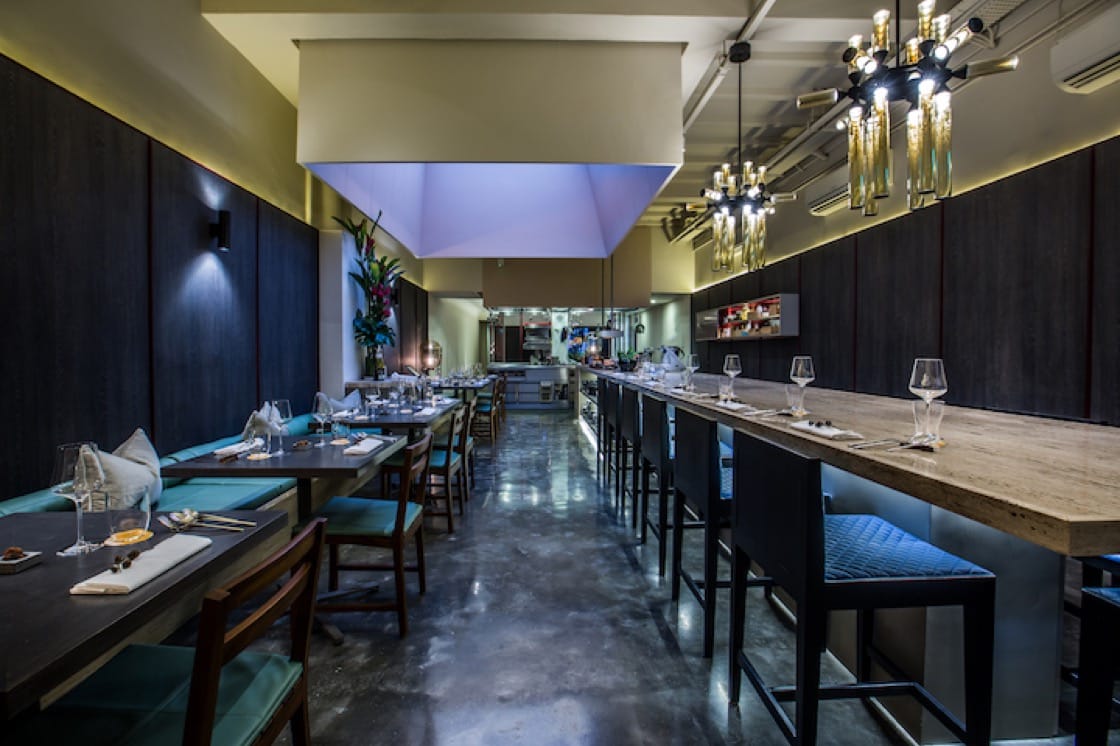 Transparency Of An Open Kitchen

Conceptually, he wanted the kitchen to be transparent. What he did not expect was the impact of transparency on him, his team and his cooking.

“Chefs now don’t have a space to explode. They have to deal with anger in a different fashion. We do a lot of work trying to get people to realise you can breathe instead of yelling. You start to measure your actions and become more mindful of what you do. You cook better, you taste better. So the space has definitely impacted us.”

Gentler cooking methods have also been observed in this open kitchen. There isn’t a massive grill and “no chance we can have a fire”, so it has lightened the style of his cooking.

“While we do sauté and plancha, we also steam a lot, make lighter sauces and motions, and try to keep all the fermented products away so the smell doesn’t permeate the dining room,” he explains. “It has had a huge impact on how we cook too. We can’t be too loud, we can’t use a lot of smoke. We do smoke small things but it’s very deliberate and measured so it doesn’t impact everybody.” 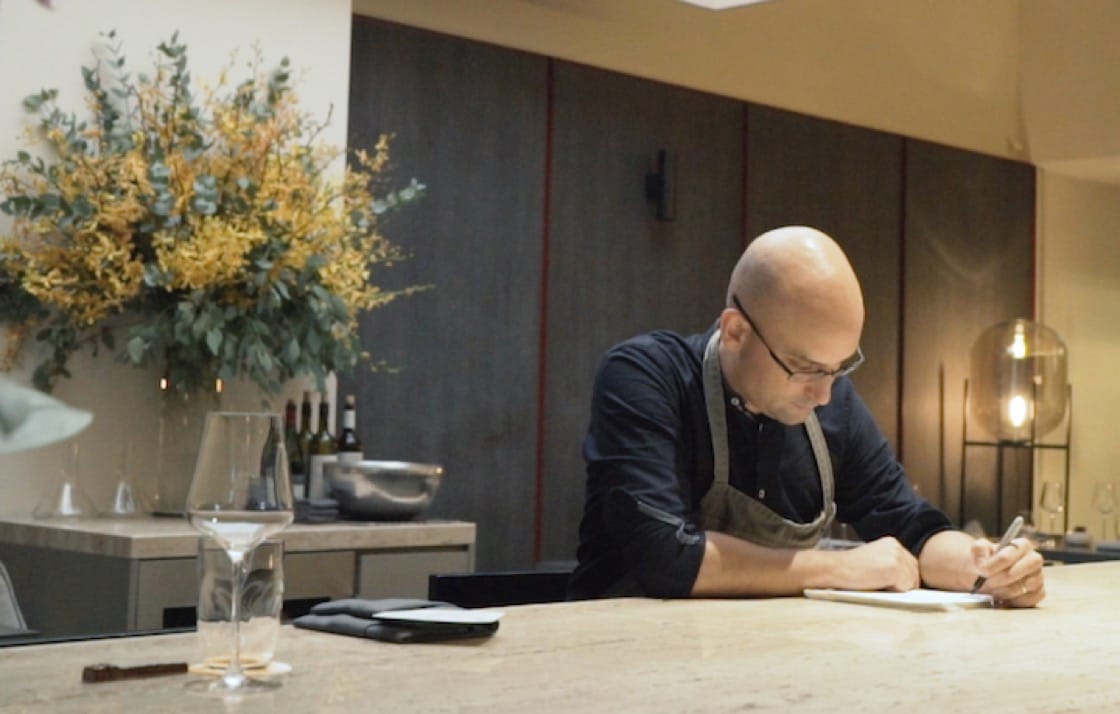 Ask him how his food or cuisine has evolved, and the alumni of Mugaritz and The Fat Duck hesitates. “I think we continue to change and evolve every day. I feel like if I managed to describe an actuality, I also stopped doing that. I think ‘ever-changing’ is a good way of describing it. I obviously noticed the improvement and found my footing, but I’m not stuck to it. I think I’m open for tomorrow, coming into work and making changes, and I think that is how you keep growing."

For him, inspiration comes from “everything” and the key is to stay grounded.

“For a long time, we’ve been trying to identify what makes a creative more creative. I think as long as you stay open and pay attention, inspiration comes naturally. It’s important to breathe, reminding myself of the breath, it puts you there, and when you’re there you stop thinking and when you stop thinking you’re more susceptible to picking it up. Creativity is not coming up with something, it’s discovering something."

His years of working in the kitchen keeps him engaged creatively and the beauty of that, he says, is “when you’re in that zone, it’s really nice and everything else just goes away”.

“Being in that flow teaches you a lot of stuff. You won’t be stuck too much on what happened yesterday or or will happen tomorrow. It’s just service and doing stuff.

“It doesn’t mean that tomorrow is not coming or yesterday didn’t shape who you are, but ultimately, it’s about what you do now that matters. You have the ability to change things. We focus on the present, where we can impact stuff. The future is in us doing something good now. We should be more mindful of what we do now. Here and now is where it’s at.”

He firmly believes in these good practices and reinforces these points. “Breathe, meditate, exercise, eat well, sleep well, be kind to people. If you bring good habits into what you do, you reap the benefits of what they bring.”

In the open kitchen, he is observed to be smiling as he cooks and to him that is “like you trying to suffuse some of that joy into the food”.