Spritely and vivacious to the end, Boots Brounstein was one of Napa’s great personalities, and with her passing at the age of 92, the Valley has lost another important piece of its living history. Boots and her visionary husband Al were part of California wine’s pioneering generation, founding Diamond Creek Vineyards in 1968 in the forested hills southwest of Calistoga. The striking quality and considerable longevity of the wines they made, as well as their trail-blazing decision to embrace the concept of terroir by bottling the Cabernet Sauvignon produced from four distinct but contiguous vineyards separately, entitle them to a leading place in any Napa Valley hall of fame. When Al Brounstein lost a long battle with Parkinson’s—a disease which he used to joke gave him “the fastest hands in the West”—in 2006, Boots stewarded the Diamond Creek legacy into the future. Anyone who met her will remember her as a gracious hostess and lively conversationalist, whose tangible love of life was just as inspiring as the wines that she and her late husband produced.

-William Kelley, Robert Parker Wine Advocate reviewer for Burgundy, Chablis, Beaujolais, Champagne, Madeira and English Sparkling Wine
Interview by Erin Brooks, Robert Parker Wine Advocate reviewer for Oregon, Sonoma County and California Central Coast
Where did you grow up?
Boots: I was born in Oakland. My dad had a business there. I left there when I was quite young, maybe two years old, and moved to L.A. I stayed there until my dad decided to have his business in San Francisco. In 1937, they had the fair and the Golden Gate opened. I do remember that. The whole city celebrated the Golden Gate. We all had to wear western clothes and if we didn’t, they’d put us in jail two or three minutes. It was a fun time to live here. Then I went back to L.A. I went to high school and college there. I got married in L.A. and had my two sons in L.A. I stayed there until I met Al.
How did you meet Al?
Boots: I had my two boys and I was divorced. It was a blind date, a setup by mutual friends. He took me in the Hollywood hills for a drink with a beautiful view of L.A. We just talked. On the second date, he got tickets for the tournament of roses and invited us all to go. He was a pilot and flew an airplane. He decided he’d take my boys to see the airplane. “Do you want to see the inside? You want to take a ride?” he asked. I said, “I’m not going to let my boys go out in a single engine!” So, he got me up in the airplane. 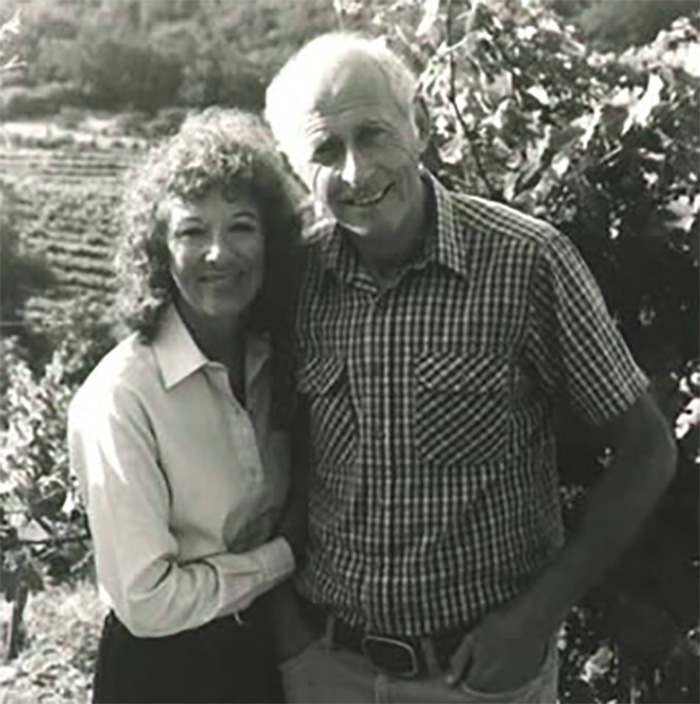 Boots and Al Bronstein circa 1980. (Photo courtesy of Diamond Creek Vineyards.)
Tell me about Al’s background. How did he get into wine?
Boots: He was born in Canada. He went to Minnesota and then moved to California because he didn’t like cold weather. He started his business from scratch when he was in his 20s. When he was in his 40s, he was bored with his business. It took him where he wanted to go and he could fly his airplane, but he was looking. Al had to be challenged. 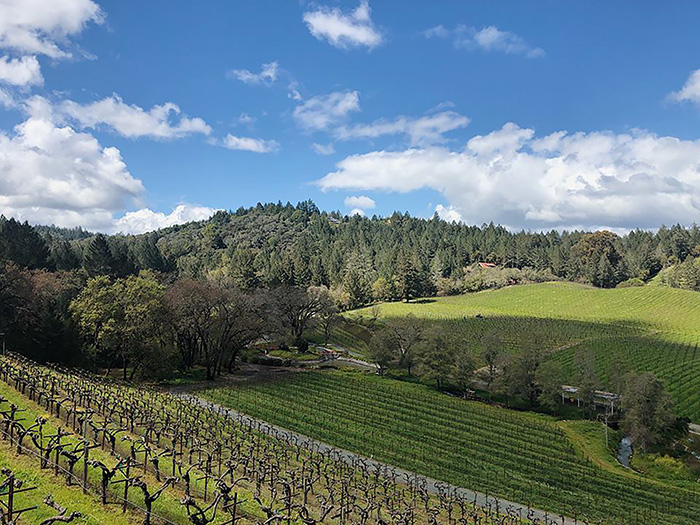 (Photo courtesy of Diamond Creek/Facebook.)
Phil: He didn’t want to just make any wine. Taking that class at UCLA exposed him to the top Burgundian properties and first growth Bordeaux wines. That was the game changer. After that class, it motivated him that he wanted to recreate that in California.
Boots: Well, he wanted to go into the business, but it didn’t happen overnight. It was only after he took the course and tasted all those wines that he really, truly, sincerely felt that here in Napa Valley, we could make wine equal to those in France. But he also felt that he had learned from them. He always said it in French, that he learned from the French.
What legacy do you think Diamond Creek has had on the Napa Valley?
Boots: We’re pretty tiny. I like to feel it’s in the bottle. The legacy is in the bottle.
Phil: Well, I think you’re being very humble. Because I think that if you talk to other vintners in the valley and ask about Diamond Creek, they would say what you and Al did was pioneering in a lot of different areas. What Al was doing, which is now common in the industry, was not common at that time. Al and some of his other colleagues had to set that precedent which is now the norm.
Boots: I remember, he would keep referring to terroir to retailers, and they didn’t know what he was talking about.
Phil: You and Al were one of the first single vineyards.
Boots: Yes, and we weren’t interested in anything but Cabernet.
Phil: And what about price point?
Boots: We were the first people to have a $100 bottle of wine. It was our Lake Vineyard wine, from little less than an acre. Al felt that our wine was worth the same amount of money they were getting for the first growths. He was highly criticized when he raised his prices. But it just rolled off of him. So we were the first to sell a $100 bottle of wine here in Napa Valley.
Phil: Didn’t he also think of price as changing perception of California wines? Ok, with French wines you don’t blink an eye, but you do with California.
Boots: He felt that, especially with Bordeaux wines, and also Domaine de la Romanée-Conti even though it was Pinot Noir, he felt our wine was as good and worth that. So he had this little tiny vineyard, that is to this day quite an incredible wine. And he said, “Why not?” So he put a $100 price tag on it. And it did sell. At the time, people thought, who’s going to buy that wine? Well, it sold out very quickly. At the second Napa Valley auction, it brought in the top bid. It was a lot of money in those days. Michael Broadbent was the auctioneer. He and his wife became our dear friends. We were so tiny and it brought the top bid and Michael was like, who the heck are they? He came to visit and we became very, very close personal friends. Very few people had ever heard of us.
Phil: In 1972 it was $7.50 a bottle. That was still more than other people, who were charging $5.00.
Boots: Al had an uncle who was a banker and he said, “Why would you want to sell $5.00 wine and go into the wine business?” Al said, “I don’t! I want to sell $7.00 bottles of wine!”
Phil: Even back then, you could get first growths for around $20.00. If you compare it to real estate, look what it went for then and what it does now.
Boots: All you have to do is look at the price of a dozen eggs and a loaf of bread.
What are your hopes for the future of Diamond Creek?
Boots: Well, I hope that family will remain here. I guess a lot of people hope for that. I have grandchildren and sons. That’s what you hope for.
How do you define terroir?
Boots: Oh. Well, it’s interesting soil. It’s a word that Al picked up because he spoke French. So I think the French use it even more than we do, even today. We became very good friends with May-Éliane de Lencquesaing from Pauillac’s Château Pichon Lalande. We used to go visit, and they would visit us, and we would share what we were both doing. She was honest about how they made wine and Al was honest about what he did. He always thanked the French, he always did. And of course, now you have a lot of French owning California wineries.
What advice would you give to young people who want to start their own wine estate?
Boots: I think it would be impossible today. We did not have a lot of money and you didn’t need it then. Today it would be somewhat impossible, first of all, just to buy land, to start from scratch—whew! People who buy vineyards and wineries that are already established, you need a lot of partners or money. And I would say, be sure to enjoy what you are doing. And work hard.
What will Napa Valley look like in the next several decades?
Boots: Probably more vineyards. I hope the beauty of Napa Valley stays. I think people care about this valley. The people that live here, there’s going to be change. Life is change. And you just hope for the best. I still love living up here. I have my secret places where I park the car.
Phil: She hasn’t shared those secret places with me!
For you, what makes a great wine?
Boots: The vineyards. I never tire of this view.