Roast Duck Is All The Rage In Hong Kong Restaurants

With the recent opening of several roast duck restaurants, we look at what makes these lacquered birds so popular in Hong Kong.

Roast duck has become a fresh-out-of-the-oven hot food trend in Hong Kong, with a slew of new restaurants specialising in the poultry. Check out what special tricks these chefs have up their sleeves to make this old classic stand out again. 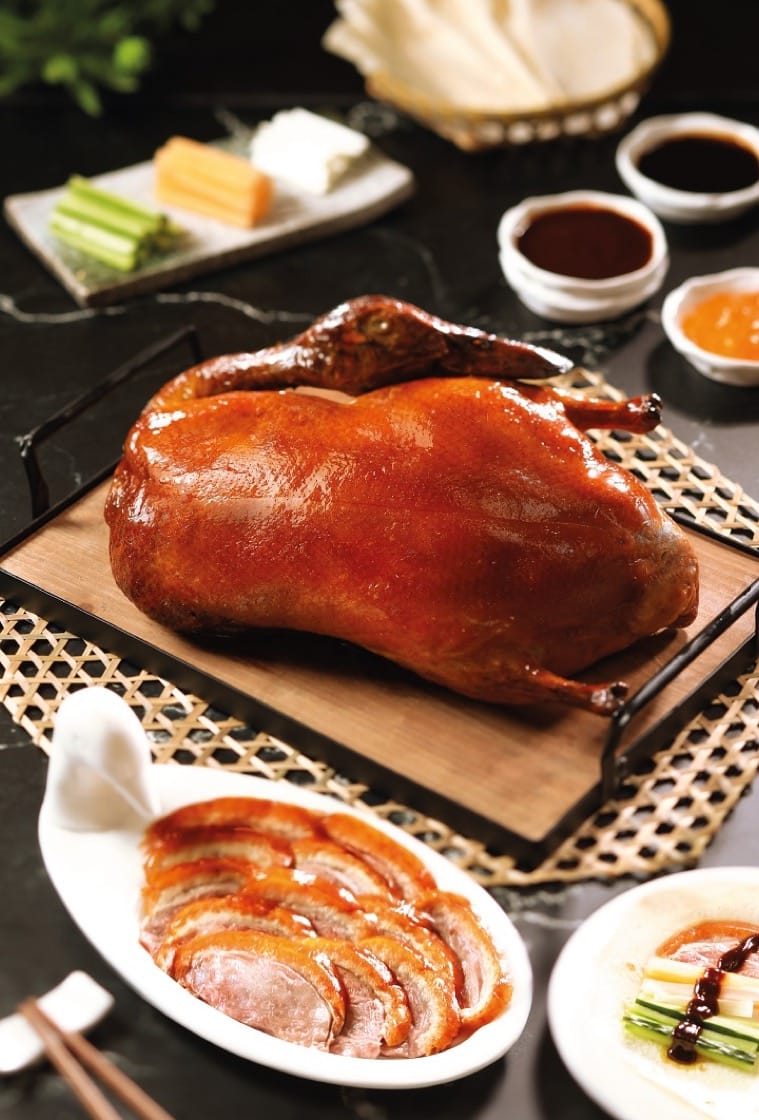 New entrant Zither Garden may be in Hong Kong, but it emphasises on authentic Beijing flavours. The restaurant employs two head chefs, one focusing on the cuisines of Beijing and Shanghai; the other, chef Zhen, zeroes in on roast duck. He inspects every roast duck that comes out from the oven before it reaches the dining table—showing how much Zither Garden cares about the quality of the fowl.

Chef Zhen had worked at Quan Ju De, the eminent establishment in roast duck in Beijing, for over 20 years. There’s nothing he doesn’t know about the sought-after roast duck recipe. And true to Quan Ju De’s approach, he slices the duck to thinner pieces so that the meat is less greasy than what’s typically served in Beijing.

Zither Garden selects ducks that weigh about 2kg. They are air-dried in an enclosed room where the levels of humidity and temperature are closely moderated, before being hung in the oven and roasted in the traditional manner to a dark golden shade. Thanks to the air-drying process, the duck skin turns out crispier and permeates a fatty aroma. The duck is best eaten with homemade pancakes, cucumber, leeks, melon and other side ingredients. In addition to the common sweet bean sauce, the restaurant also provides a homemade sauce made with honey and plum. The duck is luscious without being too oily. 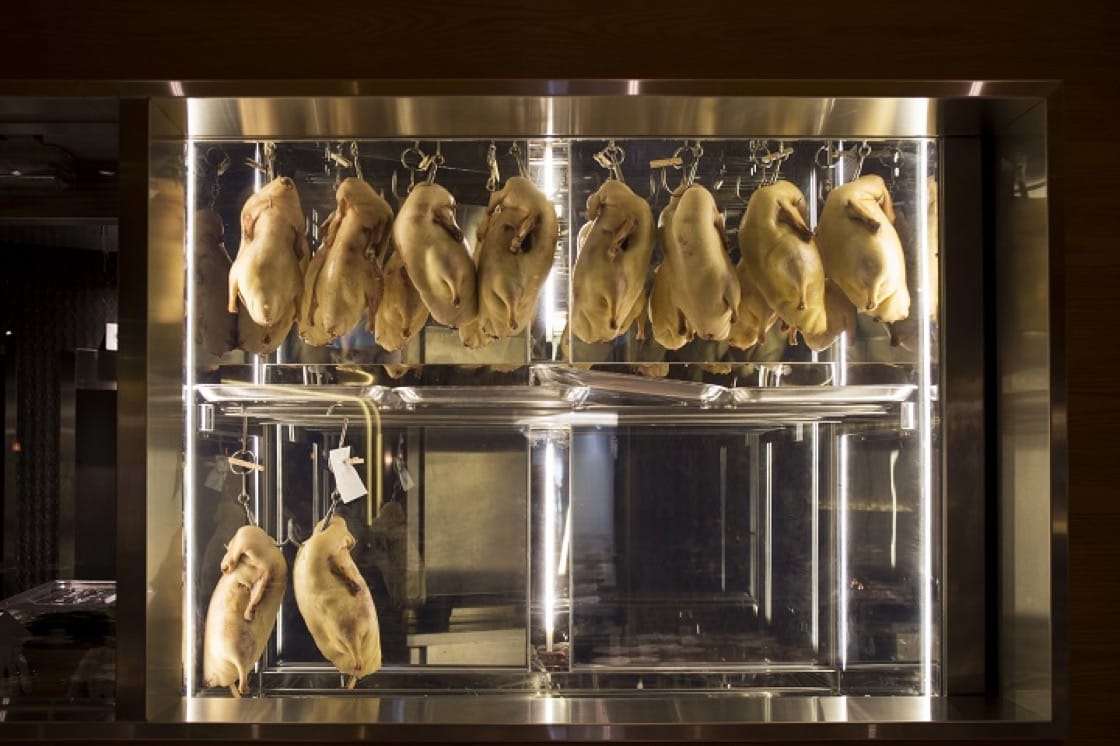 Opened by “Demon Chef” Alvin Leung, who also runs three Michelin-starred Bo Innovation, one can only expect delicious and inventive stuff from his newest food venture, Forbidden Duck. Indeed, its slow-roasted whole duck wows with its out-of-the-mill ingredients and cooking techniques. The roast duck oven can’t be found anywhere else, as is specially manufactured in Australia with a round cavity made of bricks. What Leung likes about the bricks is its abilities to distribute heat evenly in the oven.

As for the duck, he chooses a Beijing breed that is raised in the United States. It has a tender flesh and has fat spread evenly in various parts of the body—making it suitable for roasting.

Leung believes that the success of a roast duck’s lies foremost in its skin, with the right colour, aroma and crispiness. At the same time, the meat has to be cooked just right to preserve its softness and juice. He also makes detailed specifications in the chopping of the duck. Before slicing the skin off the meat, the duck is left to rest until the meat shrinks slightly. With the inflation of cells after heating, this prevents the loss of juices in the meat. 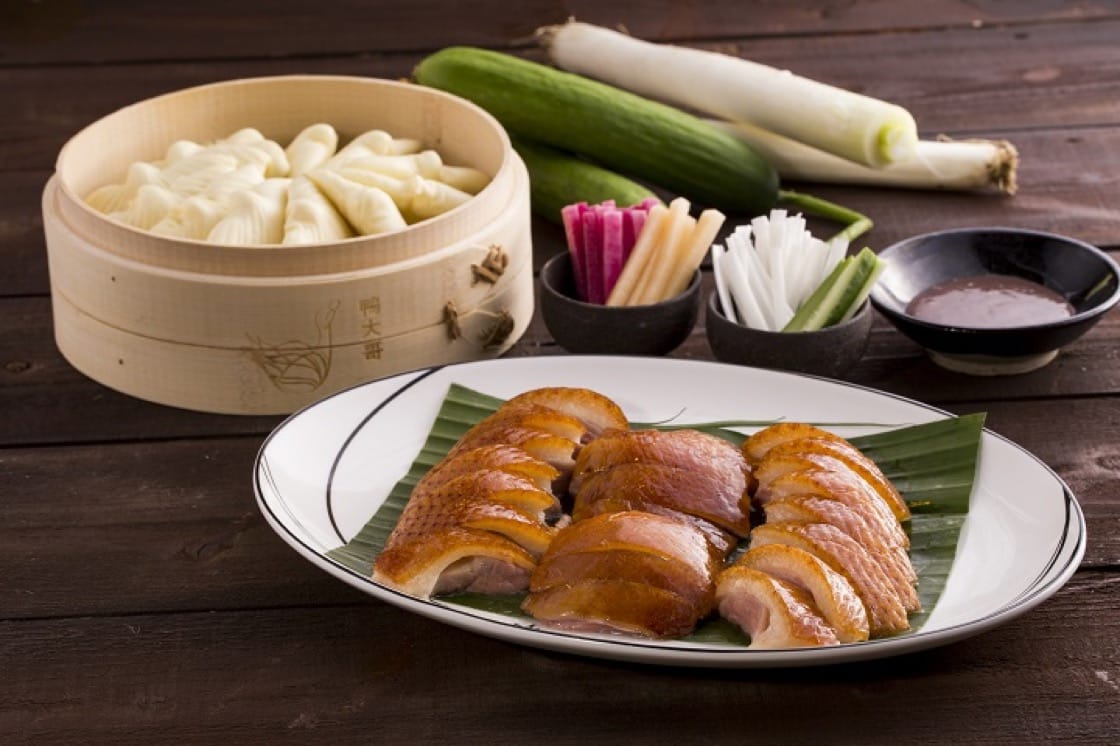 In the former, the duck is first dry-aged to let the fat dissolve into the flesh. This treatment softens the meat and intensifies its flavour while reducing the greasiness of the finished dish. Slow heat is the highlight of the cooking process. The duck is gently cooked for more than three hours to achieve the perfect doneness, then roasted on high heat for 20 minutes to get the skin golden and crispy. The interior and exterior of the roast duck are equally delectable.

The Peking roast duck at Forbidden Duck features a unique way of serving. Leung has the duck cut into thick pieces with two parts of skin and one part of meat, paired with an orange-based sauce and homemade steamed butterfly-shaped orange flavoured buns.

Taking the duck concept to the next level, there is another dish: stir-fried minced duck, which can be prepared in four ways that are inspired by various national cuisines. The French version combines red wine, Port wine, onions and duck liver with duck meat. The other pairings are Indian cumin, Korean sauces and Hong Kong-style black pepper and sesame. All of them bear the creative mark that are inseparable from the ‘Demon Chef.’

This story was originally written by Chen Zhi Xiong and translated by Vincent Leung. Click here to read the original version of this story.

MICHELIN Guide Budapest : at the heart of Budapest, this restaurant offers a world tour of tastes and flavors

Thanks to his multiple television appearances, Jenő Rácz had already acquired a great popularity in Hungary. Now the young chef is the head of Rumour, a theatrical restaurant where an elevencourse menu showcases the colors and flavors of his Hungarian roots, mixed with influences from his travelling years in Europe and Asia.

The MICHELIN Guide takes you on a trip to Hungary to discover the treasures of this country, its chefs, its products and its producers. Following the launch of the MICHELIN Guide Budapest in september 2021, we take a closer look at Borkonyha Winekitchen, run by owner-Chef Ákos Sárközi.