The Story: This stalwart stall in Amoy Street Food Centre, which specialises in tze char (home-spurn Chinese dishes), is one of the handful of hawker stalls that remain open for dinner in the Central Business District. Open from Wednesday to Sunday, the stall (01-56) functions like a mini restaurant with its customers occupying most of the tables on the first level of the food centre.

Whipping up dishes to meet the relentless stream of food orders during the peak lunch and dinner hours is Tony Liew, who gave up his corporate job to take over from his father as the stall’s head chef 14 years ago. Quan Ji was started by Tony’s grandfather at a street stall in Hong Kong Street in 1965. The stall relocated to the nearby Carpenter Street before shifting to its current location in 2005.

Liew maintains that he has not tweaked his grandfather’s prized recipes but has drawn on his work experiences in the food industry to improve the efficiency of kitchen operations. 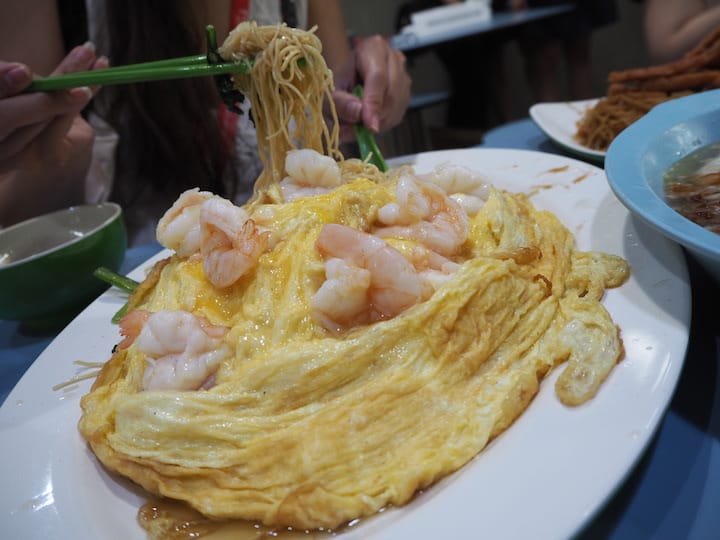 What’s So Special: The stall, which focuses on Cantonese-style tze char dishes, has its signature dishes plastered on a bright yellow signboard, including classics such as prawn paste chicken, prawn rolls, san lao hor fun and stir-fried kai lan with sliced fish. However, one of the stall’s old-school gems, which is not listed on the signboard, is the egg noodles or wong po lou meen, which means yellow cloth and blanched noodles in Cantonese. The yellow cloth refers to a golden blanket of fried egg omelette that is generously studded with succulent prawns.

Tear open the layer of fried egg and an irresistible wok hei (wok’s breath) aroma wafts out from the dome of springy noodles with more prawns, chye sim and umami-laden oyster sauce. What makes the dish special is the fluffy, unctuous blanket of egg with slightly browned crispy edges that is cooked with liberal lashings of lard. This dish is something of a hidden secret that is not listed on the menu, so you would have to ask for this dish directly from the stall assistant.

Other dishes that are a common sight on diners’ tables include har cheong gai (prawn paste chicken) that is encased in a slightly pungent and crispy crust, and sliced fish bee hoon with the classic combination of black bean and bitter gourd.