Fall head over heels with your special someone over a memorable meal at these places.

Diamonds may be a girl’s best friend, but an epicurean treat comes close. Snag a romantic rendezvous over the candlelight, with stunning views and, more importantly, good food and wine. With Valentine’s Day approaching, it is time to start planning for a night to remember. We suss out eight Michelin-starred restaurant where love is in the air.

Romantic Surprises At Odette
With its enchanting decor and evocative menu, the two-Michelin-starred contemporary French restaurant in the iconic National Gallery Singapore is a hotspot for dates. On Valentine's Day, chef Julien Royer will present two menus that have eight courses each (from $268++). Expect culinary surprises on the table as Royer has come up with new dishes. They include the spiced Apicius “Colvert” Duck, a honey roasted wild mallard duck with Apicius spices, and a beautiful floral dessert, Lychee & Rose Delice. For a special touch, ladies will receive mini bouquets to cap off the sublime dining experience. 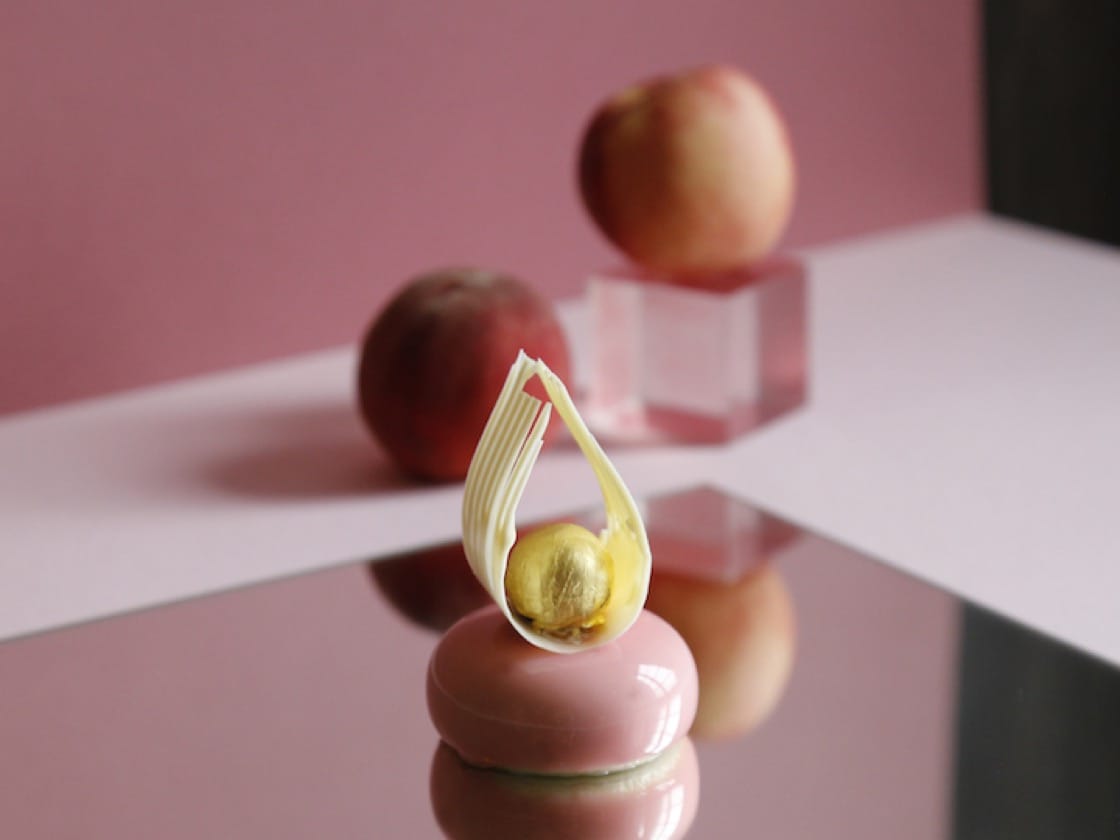 Braci's Valentine's Day Almond, Peach and Ruby Chocolate (Pic: Braci)
Intimate Dining At Braci
Make it a date at one-Michelin-starred modern Italian restaurant where chefs will prepare each course in full view of diners from the open kitchen overlooking the intimate 18-seater dining room. For Valentine’s Day, restaurateur-chef Beppe De Vito and head chef Mirko Febbrile have created a progressive Italian menu featuring the likes of pigeon mousse with fermented cherries and foie gras, and scampi with sea urchin, fregola and zucchini. Other highlights include monkfish with blue lobster, saffron and clams jus and a sweet ending of almond with peach and ruby chocolate. The five-course menu for the first seating from 6 to 8pm is priced at $200++ per person, while the six-course menu for the second seating from 8.30pm onwards is priced at $250++ per person. 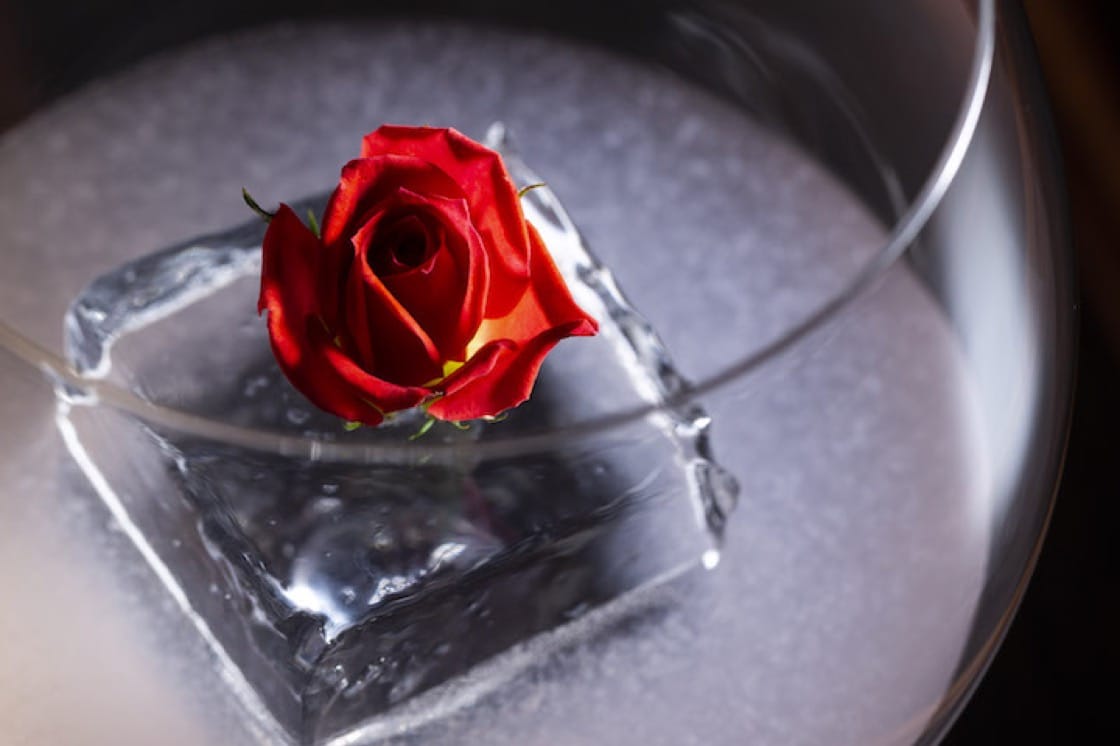 Steak Your Claim At CUT by Wolfgang Puck
Carnivores can head to the one-Michelin-starred restaurant by celebrity chef Wolfgang Puck, which is acclaimed for its steaks. Besides the usual Australian Angus and Wagyu selections from the United States, Australia and Japan, it is debuting its Hokkaido Snow New York Sirloin Steak on its Valentine’s Day menus that are only available on 14 February (from $198++). Sourced from Tomakomai, the luscious beef is served with yuzu kosho butter. Other dishes to share with your date include Kaluga caviar with eggs benedict vol au vent, Austrian oxtail bouillon with chervil, bone marrow dumpling and Perigord black truffles. End with a sweet note with a rich Valrhona chocolate soufflé with crème fraiche cream and Gianduja ice cream. Ladies will also receive a rose on that day.

Drink To Love At Waku Ghin
Clink your glasses with Beauty & Beast ($25++), a love-themed cocktail at The Bar at Waku Ghin, a two-Michelin-starred modern Japanese-European restaurant by culinary maestro, Tetsuya Wakuda. This romantic concoction by head bartender Kazuhiro Chii is an ambrosial blend of rose syrup, peach berries and lemon juice. To top it off, the cocktail is fittingly topped with a rose. Available from 7 to 14 February. 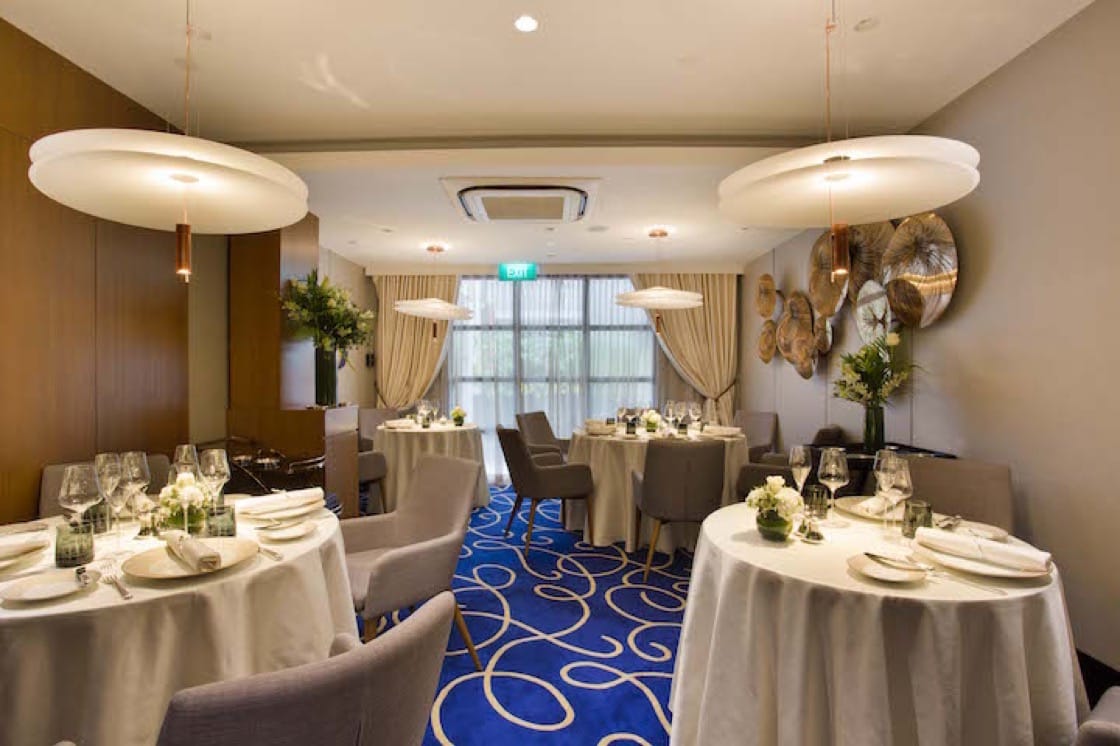 The romantic interiors of Bacchanalia by Vianney Massot (Pic: Bacchanalia)

A French Affair At Bacchanalia By Vianney Massot
Nobody does romance quite like the French. For the occasion, chef Vianney Massot has curated two menus: the three-course dinner menu ($188++ per pax, from 5.30 to 7pm) features signatures such as the imperial caviar on onglet beef tartare with shiso leaf and slow-cooked Bresse chicken with ivory sauce, Paris mushroom and crayfish, while the seven-course dinner menu ($358++ per pax, from 7.30pm to 10.00pm) showcases the likes of macaroni cheese gratin of black truffle, celeriac and foie gras, baked lobster in a cocotte with Sarawak black pepper sauce and roasted milk-fed baby lamb rack. The highlight of both Valentine’s menus is La Bouquet de Rose, a special dessert carefully crafted from Japan’s famed Hakata Amaou strawberries, intricately shaped to represent the flower of love. 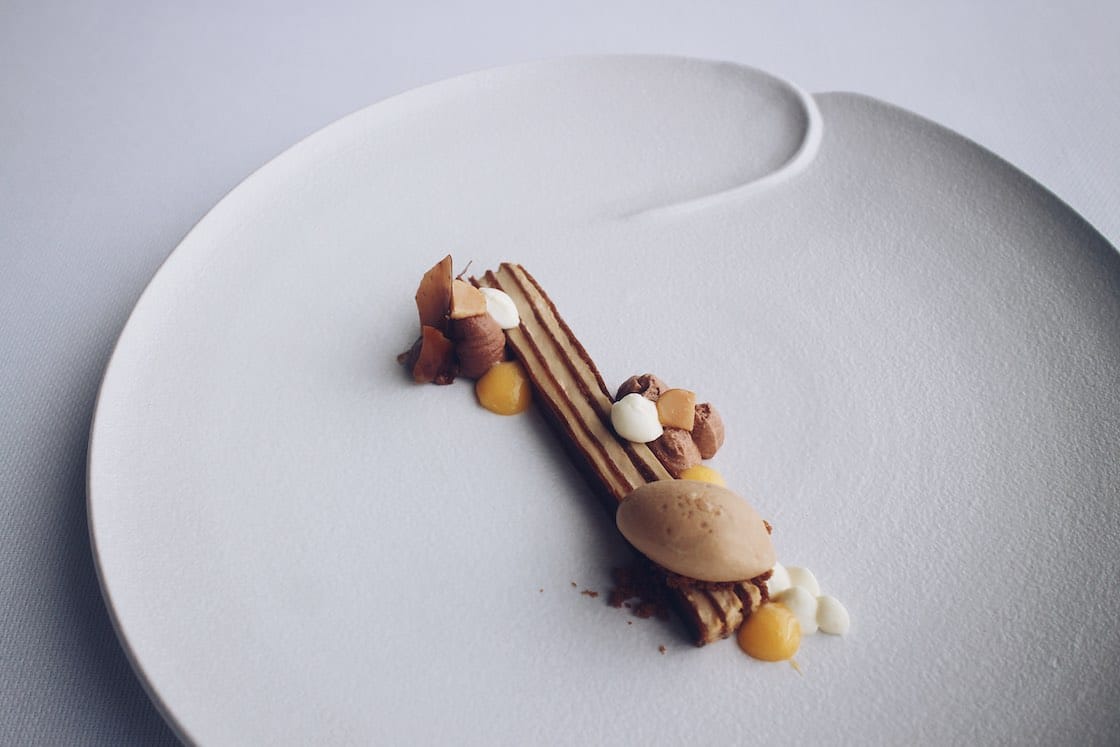 Dinner With A View At JAAN
Enjoy a breathtaking view of the city over a romantic dinner for two at one-Michelin-starred JAAN, where chef Kirk Westaway will be presenting two extravagant Reinventing British 10-course dinners on 14 and 15 February. The journey through the British Isles features Scottish scallop with smoked Iberico broth, Scottish lobster with burrata and tomato, turbot fillet with obsiblue prawn tempura, baby leek and rich ikura and end off with a rich caramel chocolate cheesecake. Priced at $399++ per person, the dinner includes a glass of Krug Grande Cuvée and an option for wine pairing at an additional $220++ per person. 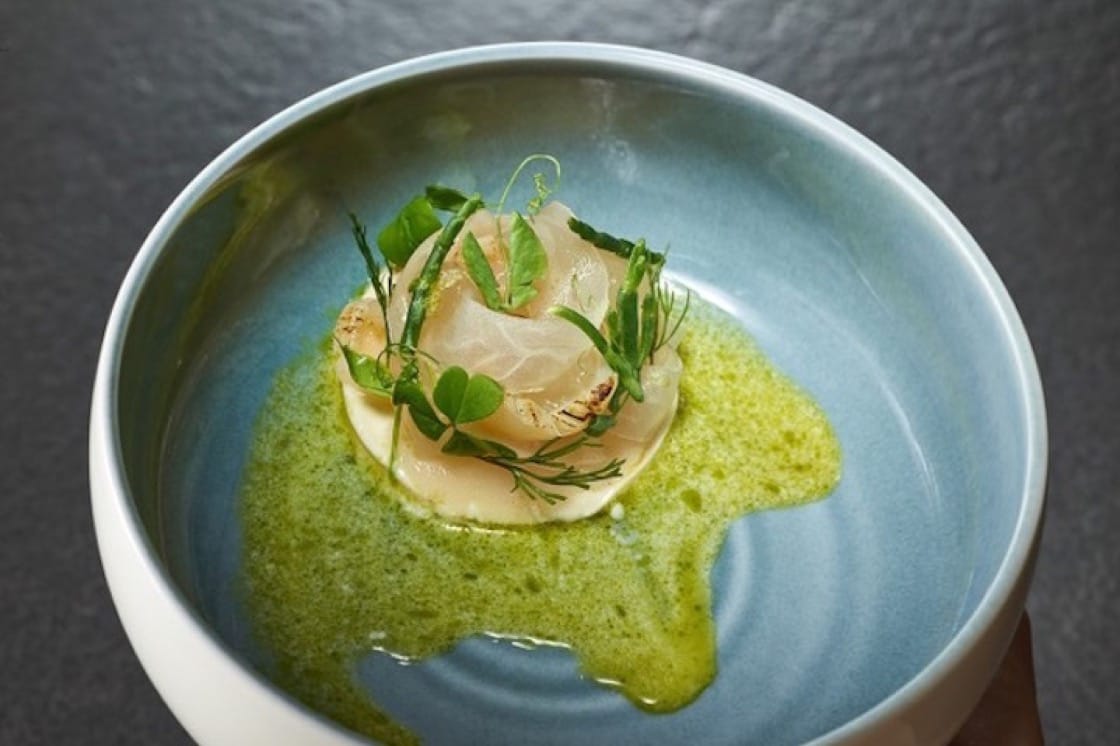 Decadent Wine Pairing At Alma By Juan Amador
Wine-loving couples can enjoy a nine-course dinner and decadent wine-pairing at one-Michelin-starred Alma By Juan Amador, which is one of the biggest American wine importers in Singapore. Executive chef Haikal Johari and chef de cuisine Sufian Zaini’s menu reads like a delicious roll-call of quality produce from around the world: Hokkaido scallop with smoked eel, Gillardeau oyster with mirin and ginger, Japanese amadai with smoked chervil root and sweetbread, Shizuoka scampi, Tajima Shortrib and vine-ripened tomato with camembert and caramel. Available for dinner on 13 and 14 February, the menu is $249++ per person with wine pairings at an additional $128++ per person. You can also pick out wines from Alma’s vast cellar to represent significant years — the year you first met or a wedding anniversary — to commemorate the occasion.

Hands-on Dessert Class With The Chef At The Song Of India
For Valentine’s Day, chef Manjunath Mural of one-Michelin-starred The Song of India has created a colourful menu that showcases the diversity of India’s regional cuisines: from the south, a porcini butternut shorba; from Western India, a savoury steamed lentil cake tempered with spices and sesame, and a sole fish stuffed with cheese and spices, then cooked in the tandoor; and an innovative take of chicken chaat from North India, made instead with roasted quail and avocado. Book any of the two seatings available on 14 February — 6 to 8pm ($98++ per pax) and 8.30-11pm ($108++ per pax) — and be eligible to sign up for a hands-on dessert-making session ($58 per pax) with chef Mural, where he will teach you the art of preparing a traditional Indian kulfi dessert to be served to your date at the dinner.