When Jeppe Jarnit-Bjergsø of Evil Twin Brewing and Daniel Burns (alum of both Noma and Momofuku Noodle Bar) opened Tørst in New York City's Greenpoint neighborhood in 2013, beer geeks flocked to Manhattan Avenue to visit the modernist bar with one of the most comprehensive beer menus in the city. Expertly served with the help of the duo’s “flux capacitor” and other gadgets behind an impeccable marble bar, Tørst’s beer list flattered the food menu consisting of charcuterie, cheese, pickles, olives and Burns’ dark, handmade Danish bread, thickened with flax and sunflower seeds.

Earlier this fall, however, Tørst welcomed a new direction, installing a natural wine program and new executive chef Jared Ferguson to replace Chuy Cervantes (who left to help launch Cosme in Los Angeles). Chef Ferguson formerly cooked at Uchi in Austin as well as San Francisco's one-Michelin-starred Sons & Daughters and two-starred Lazy Bear before launching into the new stage of his career at Tørst.

One common ground among his dishes is their ability to be dunked, dipped or swept up with pillowy chunks of sourdough complete with Tørst’s signature house-cultured butter. “We serve ours with griddled bread from She Wolf Bakery here in Brooklyn, but it would taste great on damn near anything.”

To bring some of the warmth into your own kitchen, try your hand at Tørst’s trusty butter recipe. 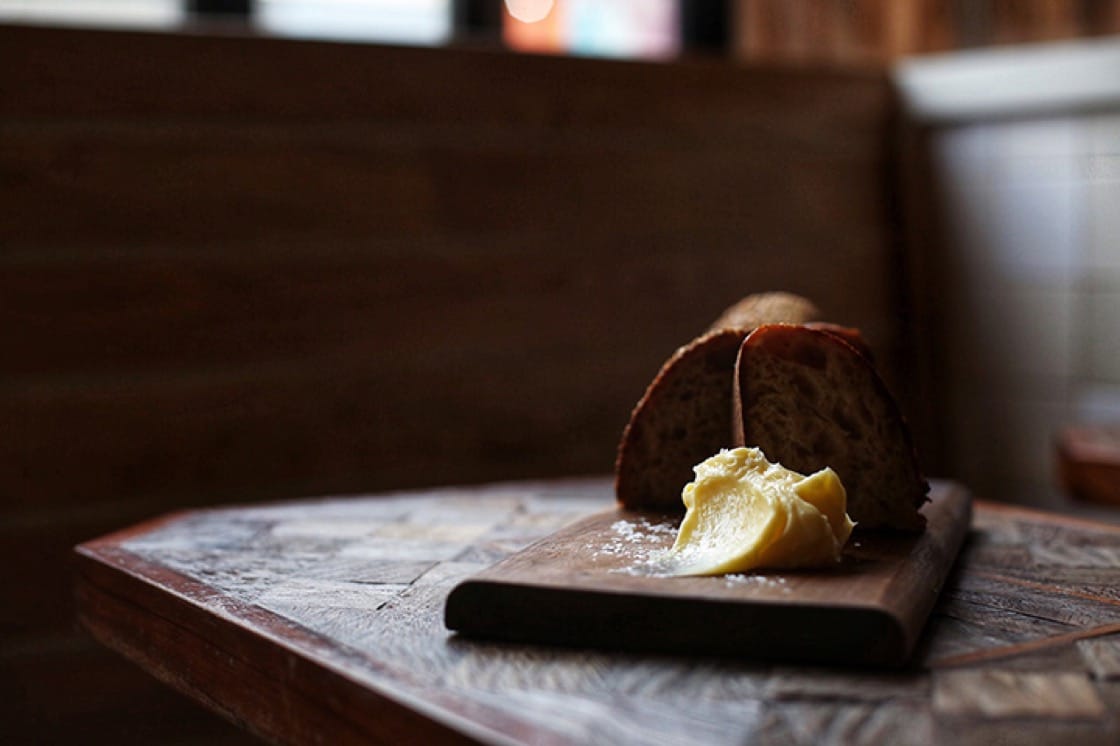 1. Sanitize a 22-liter food grade plastic or glass container. Fill the vessel with the heavy cream and cultured buttermilk. Mix well with a whisk then cover the mixture with cheesecloth that is secured with kitchen twine.

2. Leave the container in an area that has adequate ventilation but isn’t too drafty. Culture the mixture for around 48 to 72 hours depending on ambient temperature and desired level of sourness, stirring once a day. (The ideal ambient temperature is between 68ºF and 75ºF.)

3. Once the desired flavor of the crème fraîche (the cultured buttermilk and heavy cream mixture) is achieved, stir the mixture then place the entire container into a refrigerator so that it stiffens and sets up nicely. Let the mixture chill down to fridge temperature before whipping.

4. Set up a stand mixer with a whisk attachment. Working in batches, fill the bowl with the chilled crème fraîche and begin whipping on high speed. (Note: To reduce the mess, wrap the mixer bowl with a generous layer of plastic wrap.)

5. For the first few minutes of whipping it will seem like nothing is happening. Soon after, the butter fat will begin to separate from the buttermilk and get “really messy and sloshy.” That’s about as far as you will want to whip it. At that point, strain and save the buttermilk for future use and place the butter solids in a chilled bowl.

6. Using gloved hands, take a small portion of the whipped butter and knead well to remove any drops of extra buttermilk that might linger. (Note: There is much debate on whether to wash or not to wash butter with ice cold water, but here at Tørst we choose to not wash out the buttermilk. Instead we chill it down and laboriously hand knead every batch of butter we make. This combined with our small scale production allows us to retain sour flavor without introducing water into the equation. You can, of course, wash the butter in ice water if you plan to store it for months at at time.)

8. Place the salt and butter into the bowl of a stand mixer then whip for 2 minutes on low speed until the salt is fully incorporated; taste and season more as desired. (Note: We season our butter aggressively but it is up to you to decide how salty you want it.)

9. Store the butter in an airtight container for up to a month in the fridge. To serve, pull out the finished butter and let it temper for several hours.

*Chef’s Note: We use low-temperature pasteurized, high butterfat [heavy] cream from Pittsford Farms in upstate New York and work directly with them to ensure that our cream is delivered to us twice a week or more, as fresh as possible. Every batch that we make yields a good amount of buttermilk that is used for subsequent batches but is also a perfect base for marinades, sauces and more.

New York City Recipe dessert
All articles of Dining In