The gluten-free market is surging. By 2021, the global market value of gluten-free goods is expected to climb to $7.38 billion, up from $4.26 billion in 2016. And since 2014, the United States leads as the flagship market of gluten-free food retail sales, with Italy and United Kingdom close behind.

As such, wheat sales in the United States are declining. According to the U.S. Department of Agriculture, wheat demand peaked in 1997 and have declined ever since, by a total loss of 15 pounds per capita in 2015. According to a 2015 Gallup poll, one in five Americans reduce or eliminate gluten from their diets.

No studies indicate a decreased interest in bread, though, which means that innovators have rushed in to fill the ancient craving, making it out of gluten-mimicking ingredients like amaranth, arrowroot, xanthan, buckwheat, chickpea, potato, sorghum, tapioca and teff flours. In 2016, gluten-free goods were the fastest-growing category in packaged goods globally, with steep growth also seen in other “free-from” (like meat-free and lactose-free) categories. 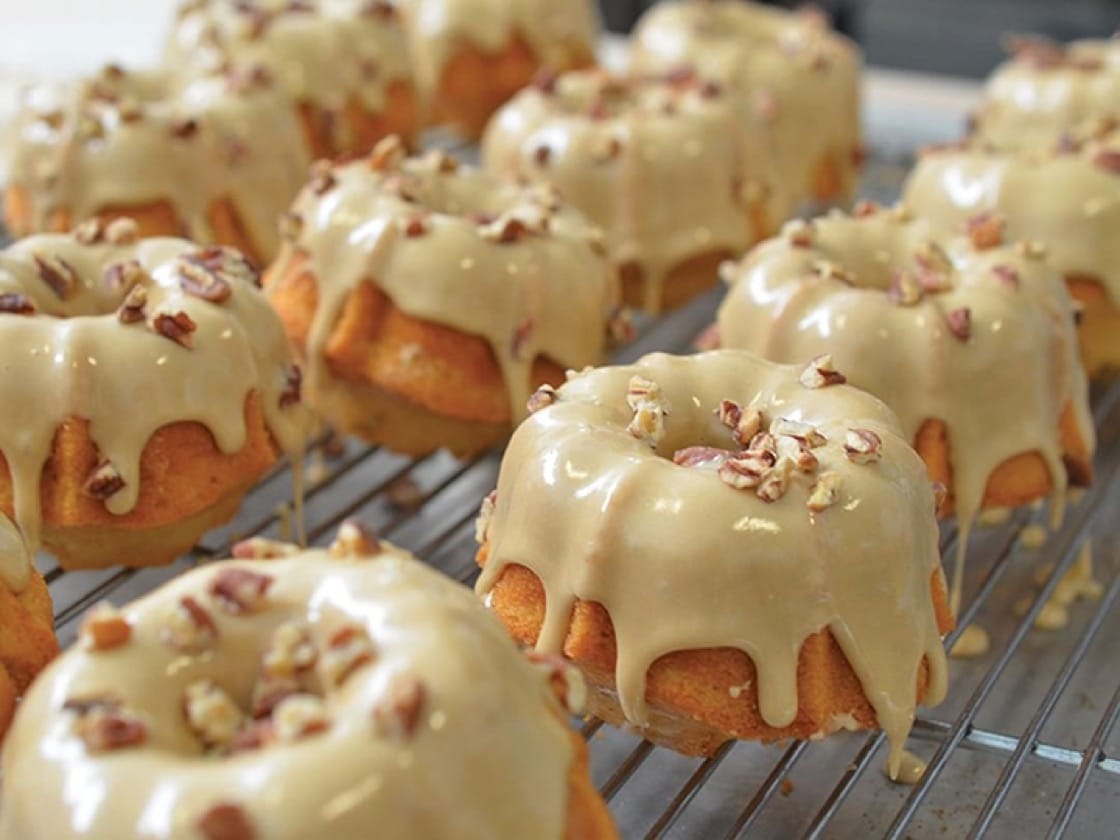 Glazed maple-pecan bundt cakes. (Photo from Mariposa Baking Company's Instagram.)
Competition drives the palatability and availability of these new alternative bread options, with better choices appearing all the time. Consumers can find bagged, gluten-free breads like Udi’s, Rudi’s, Canyon Bakehouse and Glutino in mainstream grocery aisles, and many more online or in local bakeries and restaurants, ranging from cultish hole-in-the-walls like Tu Lu Bakery and Rawsome Treats in New York City and Rise Bakery in Washington, D.C. to one-Michelin-starred Blackbird in Chicago.
RELATED RECIPE: Gluten-Free Salted Chocolate Chip Cookies
Michael Wallace is the research and development chef at Thomas Keller’s gluten-free flour line, Cup4Cup (as well as at TKRG and K + M Chocolate), and the former executive chef of The French Laundry. The Multipurpose Cup4Cup blend is renowned even outside of gluten-free circles: a cornstarch, white rice flour, brown rice flour, milk powder, tapioca flour, potato starch and xanthan gum blend that sells for $16.99 for a three-pound bag online. 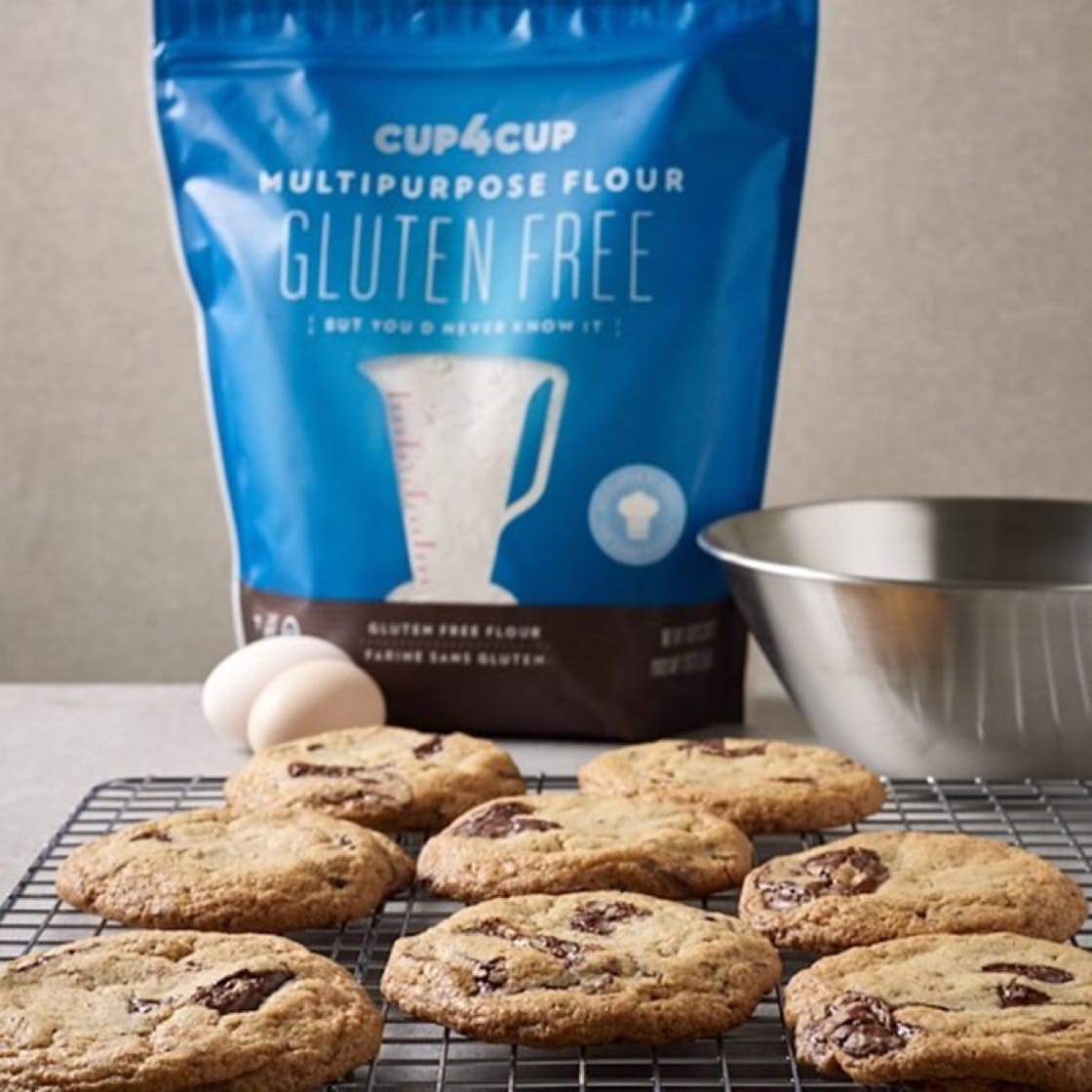 “It’s a recipe you can sub into regular recipes, cup for cup,” says Wallace. “The recipe came from a tuiles batter for our salmon cornet, the first canapé at The French Laundry. The chef [Lena Kwak, Cup4Cup’s president and co-founder,] made it gluten-free for a guest, and we tasted it back in the kitchen and thought, ‘Wow, this is just as good.’”

Engineered to perform similarly to ordinary all-purpose flour, Cup4Cup recipes don’t need to come from thin air. “Today, probably 99% of our recipes originate from Bouchon Bakery recipes, and are translated from there,” he says of the now-extensive range of flours offered, from pizza crust to muffin and cake mix, that Cup4Cup sells. He’s full of tips for gluten-free home bakers and regularly answers crowd questions on Facebook. “I like to stir muffin and pancake batters for 30 seconds. Let it sit for 4 to 5 minutes, then remix it,” he explains. “For cookie or muffin batters, it’s not great if you overmix, whereas with bread, you’re not going to overmix it.”

As of September 10, Cup4Cup began selling its new gluten-free bread mix online; it took Wallace seven years to develop the recipe. “The five factors we look at are texture, taste, performance, nutrition and shelf life. These are five really hard things to solve. The hardest one for me was shelf life. We’d make something really good and the next day it would fall apart.” 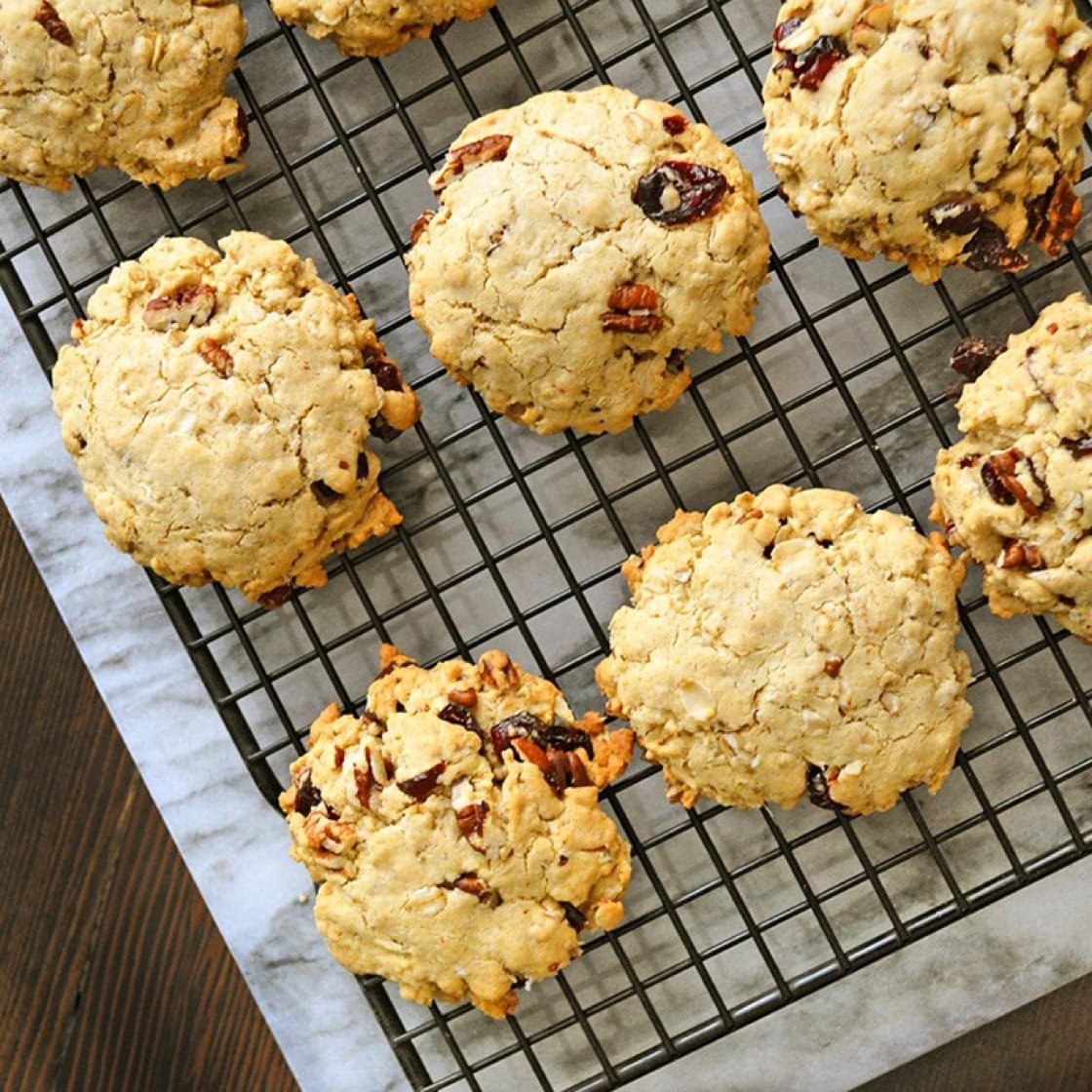 For gluten-free bakers at home, Wallace’s first big tip is simple, albeit a little unexpected: buy a thermometer to make sure your oven is calibrated correctly. “I buy twelve at a time, usually the Taylor stand-ups,” he says “They’re super cheap but very helpful. You’ll want to throw one out after about six months.”

RELATED: The French Laundry at 40
Fifty miles due south of Cup4Cup’s experimental kitchen in Yountville is Mariposa Baking, a gluten-free baking company based in Oakland. Founded in 2004 by baker and owner Patti Furey Crane, Mariposa has two public-facing bakeries in the Bay Area, and also sells its gluten-free bread, pizza crust, bagels and other baked goods wholesale to major groups like Williams-Sonoma and Good Eggs as well as smaller outlets like Gracias Madre, Philz Coffee and Wise Sons. “We’re big for a gluten-free baking company, but we’re small for a baking company,” says Crane, humbly. “At this scale, we can really control quality.”

Gluten-free baking can be tricky—the flours tend to be finer and more varied than wheat flours, making weighing (rather than using measuring cups) more necessary for controlled results. Because of the increased sensitivity of the flours, factors like bringing eggs and milk to room temperature or using an electric mixture where recommended become all the more important and helpful. “I like a really clean, classic taste,” Crane explains, taking a break from her weeks in the kitchen working on her baguette recipe to speak. “I want to achieve the taste that people expect from regular baked goods.” 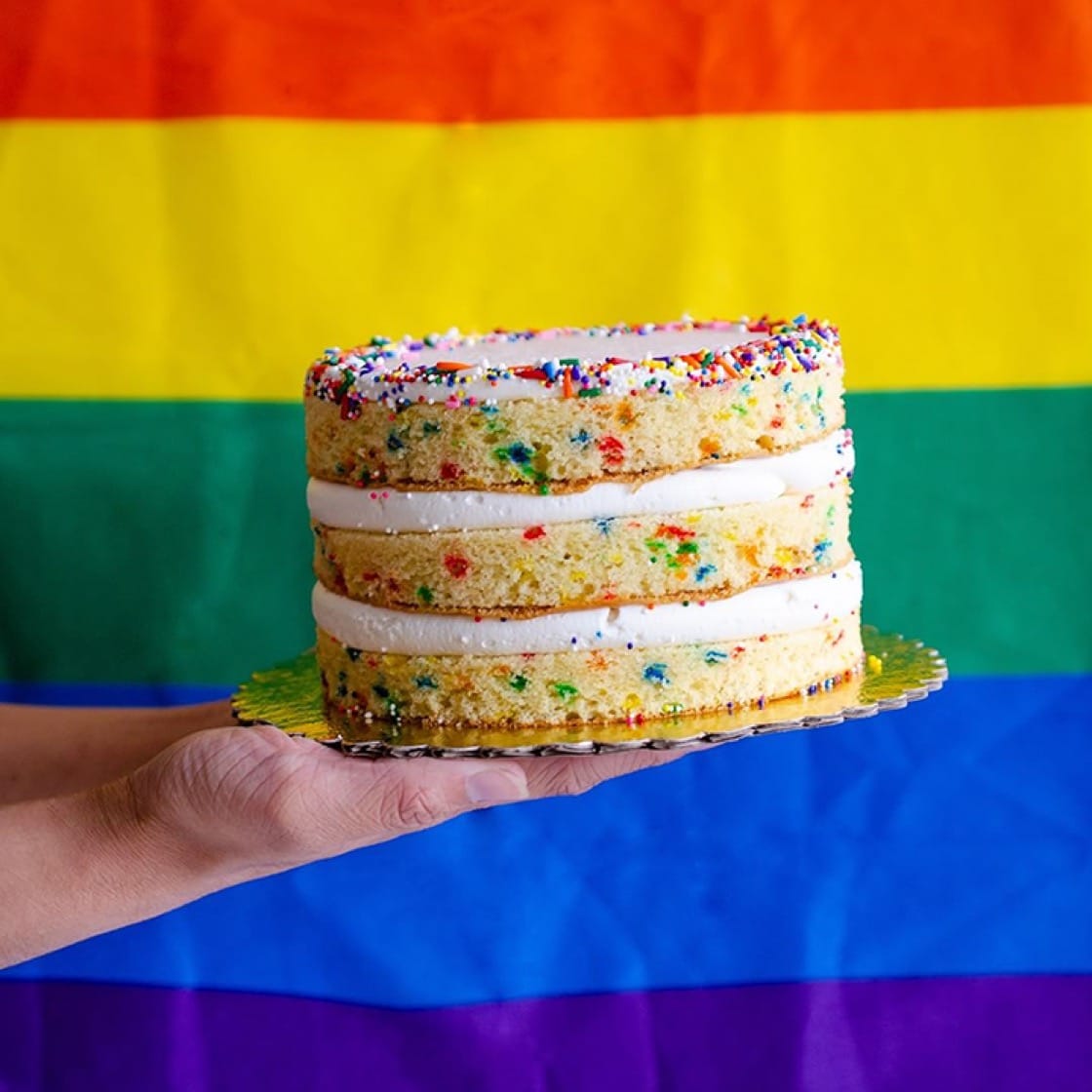 Crane learned from Bette Hagman, one of the pioneers in gluten-free baking, who wrote some of the foundational texts and recipes in the movement. Hagman was a self-taught, Seattle-based food scientist who at age 50, upon being diagnosed with celiac disease, began a career formulating gluten-free flours. This obsession led to her publishing six cookbooks (she was working on her seventh when she passed away at age 85 in 2007). “I started baking from Bette Hagman’s books ages ago,” says Crane. “Her blends formed the basis of our brownies. It’s really basic. Those three flours: brown rice flour, potato starch and tapioca starch.”

Gluten-free baking begins with the foundational flours—like brown rice flour or almond flour—and is added with supportive flours which bakers might use in smaller quantities and for a specific purpose, like, for instance, amaranth for extra protein or xanthan gum for thickening.

There are certain rules to heed when it comes to gluten-free baking. What would feel like overmixing in traditional baking, for instance, can actually help build better structure in gluten-free goods. 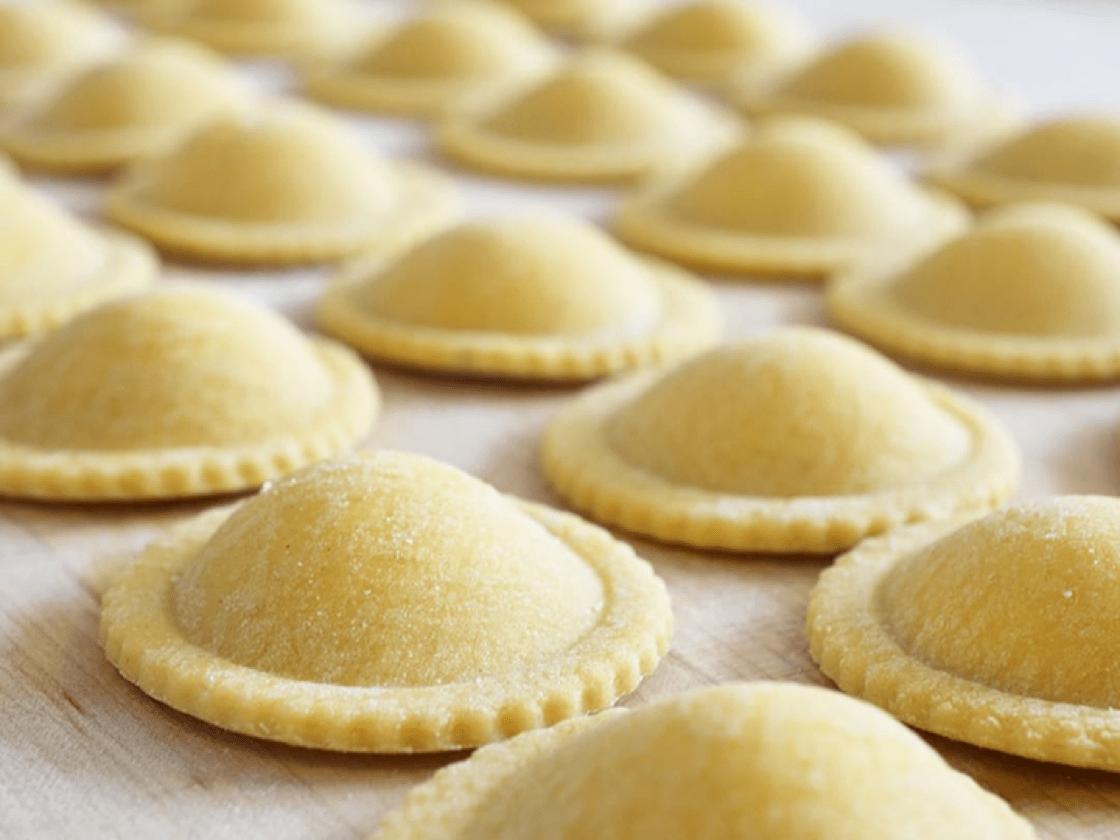 Gluten-free bakers combine flours to ensure their baked goods don’t turn out sandy, as gluten-free flours sometimes have more trouble absorbing water than gluten-rich flours. Toward this goal, some bakers grind the gluten-free flours up first and then soak them or heat them before mixing with wet ingredients. Another solution is to rest your batter for 30 minutes after mixing, whereby better absorption (and more unified structure) can be achieved.

Gluten-free goods also generally benefit from having more leavener—baking soda or baking powder—as their flours have less elasticity, or rising power, than gluten-rich flours and often need longer baking times (even past the point where a toothpick comes out clean) or else the moisture needed at the beginning to hydrate them won’t have time to evaporate and they’ll end up sticky.

For newcomers, it’s best to start with gluten-free baked goods that are moist in their original form—like zucchini bread or apple cakes—which tend to turn out well.

Chef de cuisine Hiroyuki Shinkai of wedding hotspot Lewin Terrace shares a recipe for a cake as light as air and sweet as love.

It's almost too cute to eat.

Meet The Local Couple Behind The Bakery By Woodlands Sourdough

They might have grown up eating cottony white bread, but this husband-and-wife team are now getting a rise out of dense sourdough loaves.