Kristen Kish of Austin’s Arlo Grey recommends this dynamic resort town for your next travel destination.

Kristen Kish is the executive chef and partner of Arlo Grey, her debut restaurant that opened this summer in Austin’s stylish LINE Hotel. Following apprenticeships under Guy Martin (at the now-defunct Sensing) and Barbara Lynch (first at her experimental kitchen Stir and then as chef de cuisine at Menton), Kish became the second woman to win Bravo’s Top Chef in its 10th season.

At her new Austin post, Kish serves an eclectic menu of Southern comfort classics alongside sweeping views of Town Lake and cocktails from Austin mixologist Brian Floyd (formerly of Austin’s Half Step and Weather Up). Dishes like crispy rice with crab and bacon, prawn and grits, ricotta beignets and buffalo short ribs offer hotel guests and Austin foodies alike a sense of Kish’s unique perspective on the world.

Born in Seoul and raised in Michigan, Kish is recognized by her peers for not only her talent but also her love of travel. In 2015, she became the co-host of 36 Hours, a Travel Channel show that partnered with the New York Times to bring the popular newspaper column to life. When asked for her favorite travel destination, she directed us to Cambodia’s popular resort town of Siem Reap. “[It is] a place that completely captured me,” says Kish. “Not because of the temples or the pretty hotels, the food or the ‘things’ you have to see out of pure beauty, but [ultimately] for its people.”

RELATED: Who Kristin Kish & Other Chefs Follow on Instagram
Siem Reap is the capital city of the Siem Reap Province in northwestern Cambodia. Best known as the gateway to the Angkor temples, this resort town is itself teeming with museums, hotels and restaurants and surrounded by bird sanctuaries and silk farms. With just short of 200,000 residents, the city’s small population is well known for its generous spirit of hospitality and street food. “The stories behind [people’s] eyes,” says Kish, “[are a] warm aura that makes me crave getting to know more.” She describes the city’s soul “as thick as the streets filled [with] motor bikes or the hued dust that blows in the air.” 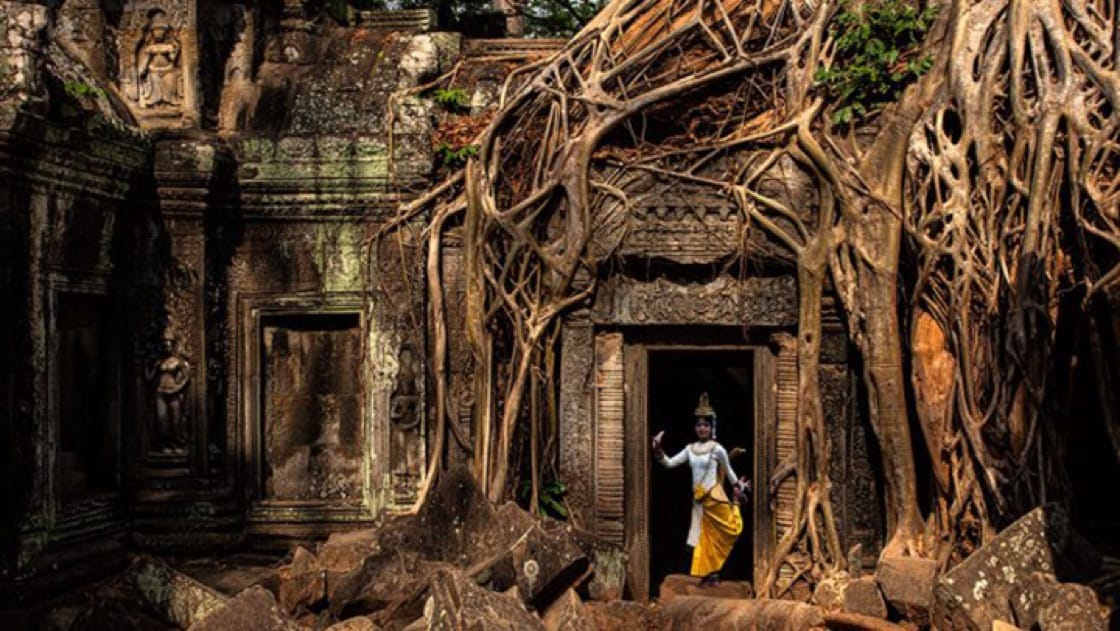 One of Kish’s contemporaries, Bun Cheam, executive chef of Brooklyn’s Talde, grew up in Cambodia before moving to the United States with his family in 1986. “If you go to Siem Reap,” Cheam weighs in, “you must visit Ta Prohm, a [12th and 13th century] temple overgrown with giant, ancient trees. It’s like nature taking back from civilization.” The former Commerce chef and Cambodian-native also recommends visitors go to the Bayon temple of King Jayavarman VII. “It has 360-degree stone carvings on its face to symbolize that he is an all-seeing god king,” Cheam explains.

For an elephant ride in Siem Reap, he points to Phnom Bakheng, a temple situated on top of a small mountain. “At the base of the mountain, there is an outdoor food court with traditional Cambodian street food, and on top of the mountain are elephant rides.” While in Siem Reap, Cheam insists you must try “beef on a stick” and a noodle dish called nom tra chuk, which is made of a broth boasting traditional Cambodian kreung (turmeric, garlic, galangal and other spices cooked with fish meats) poured over tender vermicelli noodles and topped with banana blossoms, herbs and chiles. “It’s so fresh tasting and aromatic,” he says.

For other typical tastes of the region, Cheam says you can’t leave Siem Reap without trying prahok (“fermented mud fish, like mudskippers,” he says), which come in abundance along with “shrimp and snails and all sorts of other fish when the river floods the rice fields.” During the dry season, Cheam explains, “the water recedes and farmers catch what they can and then smoke, dry or cure the catch, making fish sauce or fermented fish.” 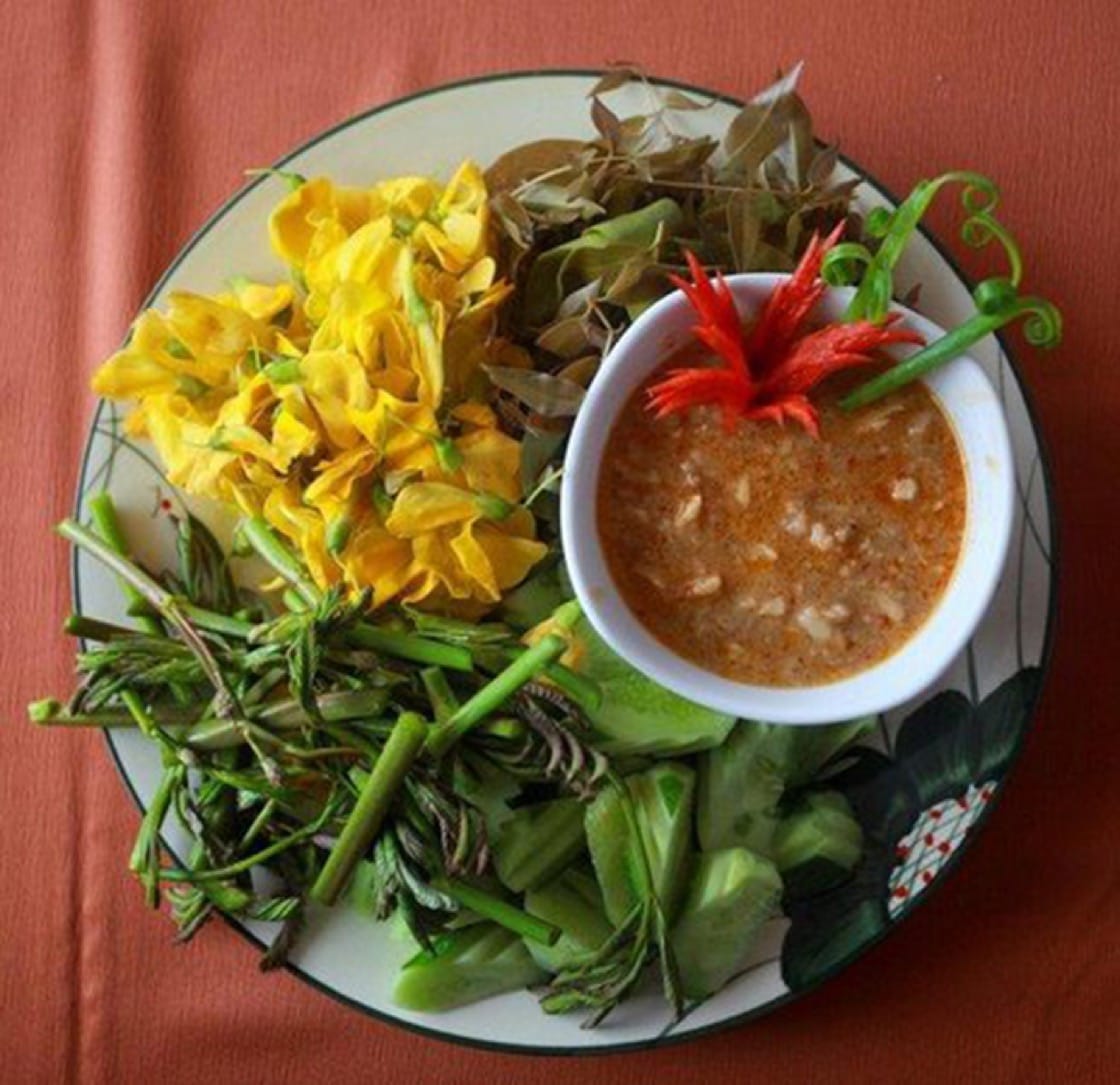 To take in the full city, Kish recommends wandering through “the streets or the canals that pass through a village [outside the city]” and connecting with locals. “All you have to do is smile with present eyes from a heartfelt place.”

For a trip outside the city, Cheam recommends a day at Phnom Kulen National Park, a mountain range with waterfalls and a river with rock relief carvings in the riverbed itself. “It was once used for royal ceremonies to bless the land with good rains and fertile crops,” he says. “What Cambodians like to do is bring food and picnic up there in the picnic area.”

For another adventure, the local sends friends to the Angkor Silk Farm. “It’s a working silk farm [where you can] see the entire process of silk production from start to finish,” he explains. “One of the farm's goals is to provide work with disenfranchised Khmer youths and teach them skills they can use to earn a living wage.”

Leave some room in your suitcase on your way out. “Once the silk is made,” he says, “the workers on the farm weave it into beautiful tapestries that are sold in the farm's gift shop.”