Hearts of palm are a mystery to many but the path to discovering this curious vegetable begins with its name. Harvested from the core of certain varieties of palm trees, hearts of palm are the tender inner stalk found at the tree’s center, or heart. They are native to South and Central America, dating back to Mayan civilizations in that region. Today, hearts of palm grace our plates in salads, dips and a host of other dishes, including as a meat substitute for vegetarians.

Hearts of palm are culled from a handful of palm tree species, including the coconut, açaí and sabal palms. The laborious harvesting process involves cutting down the trees and carefully removing the bark and other fibers until only the tender heart remains. Years of over-harvesting wild hearts of palm led to regulations limiting farmers to harvesting only multi-stemmed palms on farms created specifically to grow them. Palm trees with only a single stem die once they’re cut and the heart is removed, whereas multi-stemmed palms regenerate every two to three years, making them a more environmentally-friendly, sustainable option. Hearts of palm from multi-stemmed palm trees in Costa Rica and Ecuador are the most consumed in the world, with Costa Rica alone exporting more than 16 million pounds each year. Ecuador and Bolivia are also top producers.

Once harvested, the hearts are cut and canned or packed in jars in water or a brining liquid. Fresh hearts of palm are a rare find in most grocery stores. They are extremely perishable when fresh and cost more than $15 per pound. The arduous procedure for harvesting them is a contributing factor to the high cost of the fresh produce.

Hearts of palm have a look unlike any other vegetable, a dull off-white color cut into thin cylinders that are sold whole or sliced. Their flavor is often compared to artichoke hearts, but hearts of palm have a milder, slightly sweet, less acidic bite with a texture that is a delicious mix of crunch and softness. Most often used raw in salads or chopped for use in dips, hearts of palm may also be cooked. They can be pan-fried, seared, grilled and roasted, and are a common ingredient in recipes from Central and South America. Civilizations in those regions were putting the entire palm tree to use thousands of years ago, eating the hearts and using the bark as building materials. 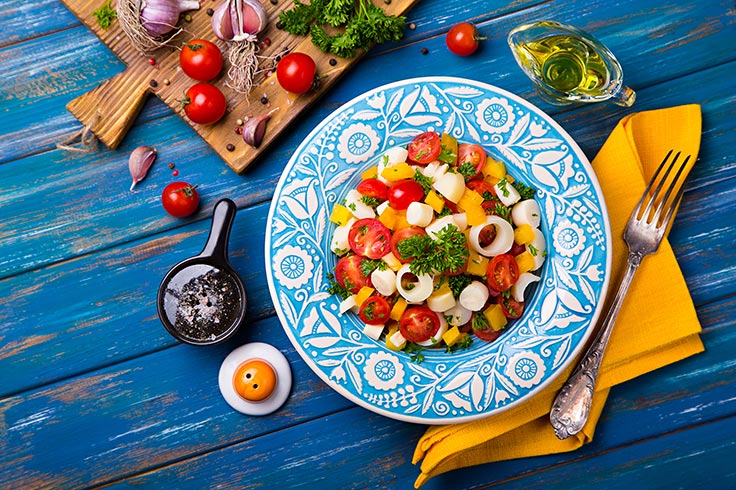 Hearts of palm are a common ingredient in recipes from Central and South America.

Vegetarians in search of a meaty texture often look to hearts of palm as an alternative. Shredded hearts of palm can replace crab meat in vegetarian "crab cakes." When shredded and simmered in the appropriate sauce, they can serve as the filling in tacos or sandwiches. A dip in batter before deep frying will yield something similar to calamari.

In addition to their versatility on the plate, hearts of palm are nutritional powerhouses. They are naturally low in calories and high in fiber, protein and fat. Hearts of palm are cholesterol-free and contain a host of other important nutrients like iron, Vitamin C, magnesium and folate, which support digestive and bone health, help stave off anemia and boost your immune system. These nutritional benefits come with a warning. Like most canned vegetables, hearts of palm can be extremely high in sodium. It’s important to rinse them thoroughly once you remove them from the brine to reduce the amount of sodium intake.

Though hearts of palm are tucked on grocery store shelves among the other canned vegetables, they pack a tang, a crunch, versatility and a nutritional punch that separate them from the rest. Do yourself a delicious favor and keep a can or two in your pantry to add an easy burst of flavor to your next dish.

Danielle Turner is a personal chef, cooking instructor and writer happily eating her way around Washington, D.C. She met her first shallot in culinary school and they’ve been fast friends ever since.