Where to Eat at Taipei’s Raohe Night Market

Raohe Street Night Market is one of the oldest night markets in Taipei. While not as sprawling as the Shilin Night Market, Raohe is well-known for being a gourmand’s heaven. A stone’s throw from the Songshan train station, visitors are greeted by the beautiful Songshan Ciyou Temple which flanks the start of the famous food street.

Here are the five street food stalls in Raohe Night Market recommended by our Michelin inspectors in the inaugural MICHELIN Guide Taipei. 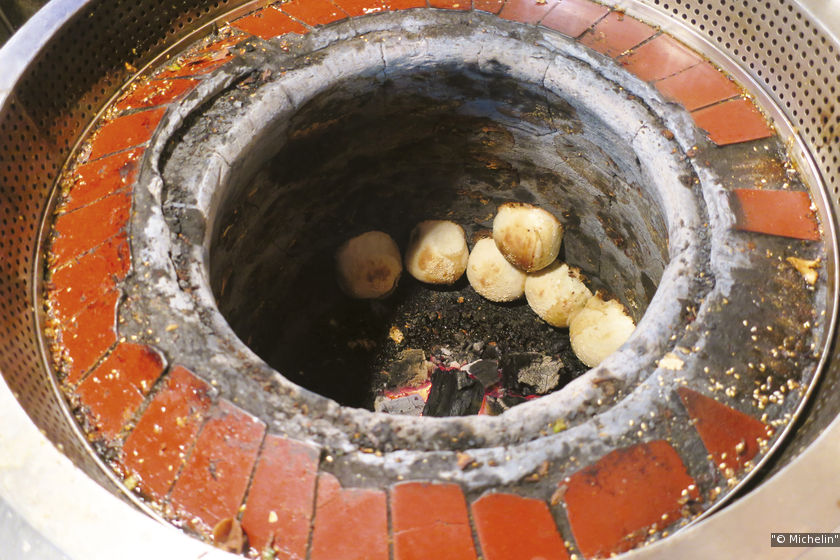 Situated right at the brightly-lit gates of the entrance to Raohe Night Market, Fuzhou Black Pepper Bun sees long lines at all times of the evening. Not to worry, the line moves fast—and the food is worth the wait. Everyone is there for their fix of the famed black pepper buns—golden, crisp buns baked on the sides of drum-like brick ovens fired by charcoal, which imparts a smoky quality that complements the juicy black pepper and pork filling laden with spring onions. 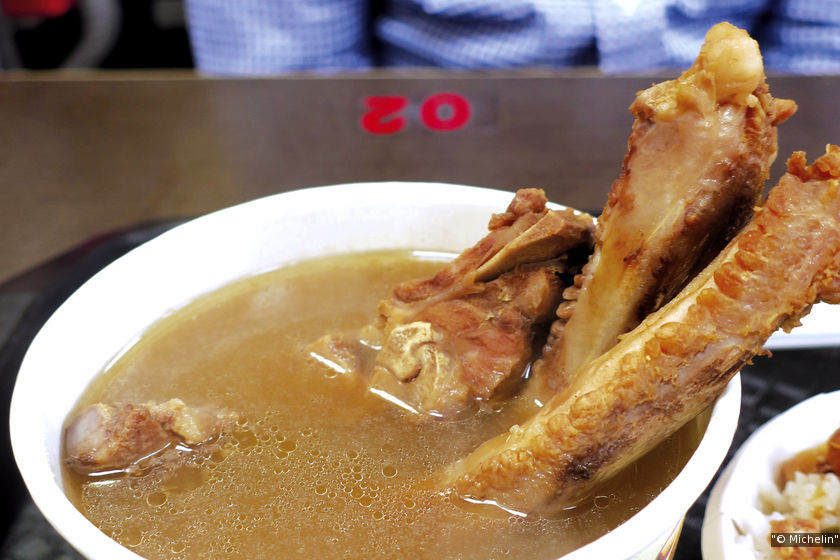 This small street stall is a must-try on a chilly winter night—that is, if you can wait around for a seat. The ribs are stewed with traditional Chinese medical herbs until the broth is rich and deeply savory and the meat falls off the bone. Each helping is topped with a heap of ginger slivers and best accompanied with a bowl of braised pork rice. 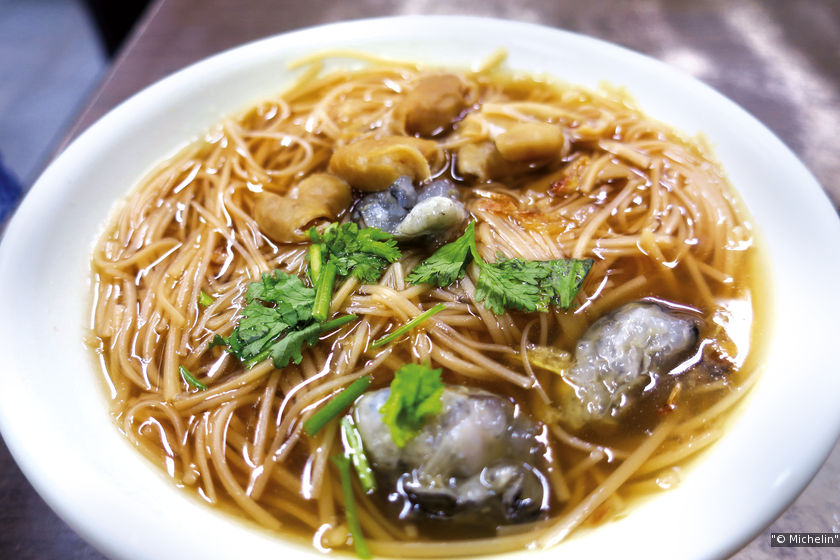 “Oh-Ah Mee Sua”, or oyster vermicelli, is another popular Taiwanese street food snack. The second-generation owner of this 80-year-old Raohe stalwart makes her tasty baby oyster vermicelli soup the same way as her father did when he opened the stall back in 1937. Unlike the stickier style of soup more commonly found in Taiwan, this stall doesn’t add cornstarch to their pork bone broth, resulting in a clear, light soup that coats the silky vermicelli and fresh plump oysters. 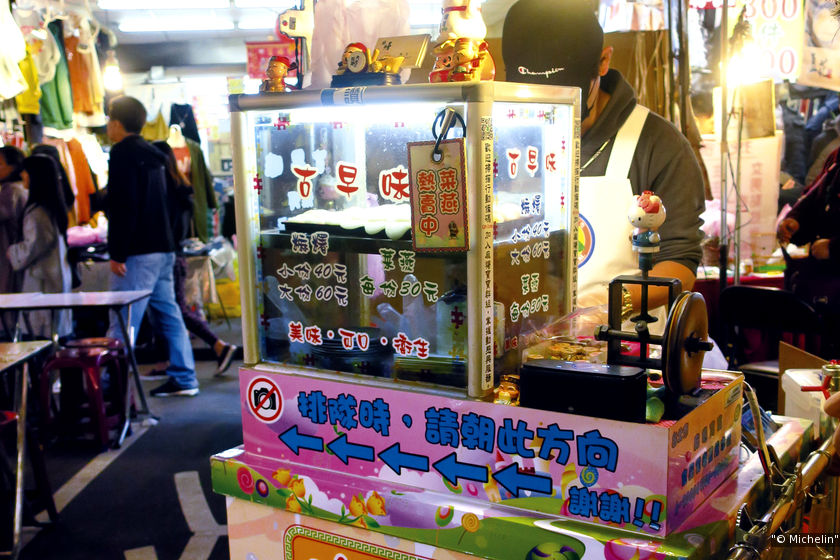 This humble little pushcart has been a fixture at Raohe Night Market for more than a decade. Owner Ah Chung makes his morsels of sticky glutinous rice mochi fresh daily, selling about 150 portions a day. The mochi only comes in three flavors, all very traditional: crushed peanuts, powdered sugar and black sesame. They’re best eaten immediately, so the fillings don’t become soggy—but if you want to save it for later, Ah Chung will gladly pack the fillings separately. 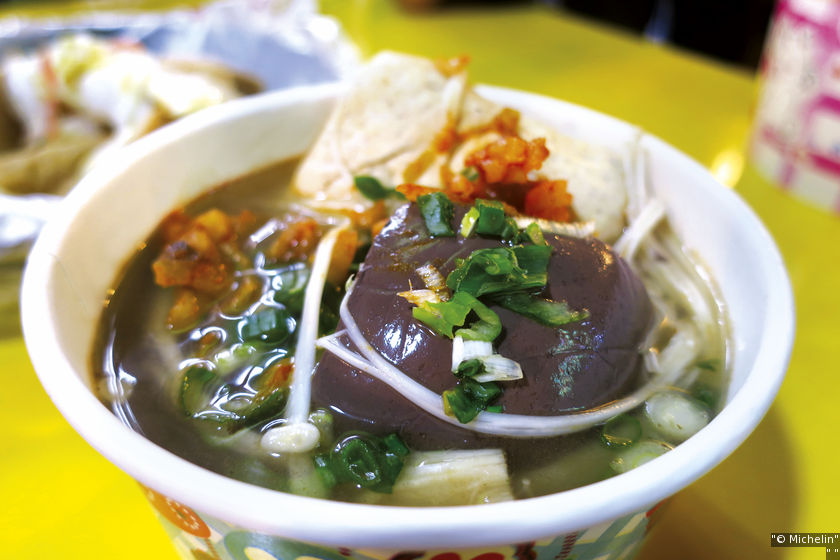 Customers come from far and wide to perch on makeshift chairs and tables at this 20-year-old establishment in the crowded market to get a taste (and whiff) of Taiwan’s national delicacy—fermented tofu. So it comes as no surprise that the signature dishes at Shi Boss are the stinky tofu soup with duck blood curd and the deep-fried stinky tofu with pickled cabbage. Here, the stinky tofu is served in a spicy soup made from a time-honored family recipe that uses traditional Chinese herbs. For a more unadulterated experience, the deep-fried stinky tofu has an umami not unlike blue cheese that is cut through with the tangy pickled cabbage served alongside.

Taipei First Day I Got My Stars
Travel 1 minute

The Best Restaurants in Taipei

Where to eat in Taiwan's capital city.

Classic Taiwanese banquet cuisine is a union of Japanese, Fujian and Cantonese traditions harking back to Taiwan's colorful past.

The First Day I Got My Michelin Stars: Ken Chen And Matt Chen of Le Palais

We get the world's most celebrated chefs to spill what it was like when their restaurants received their first Michelin stars.

First Day I Got My Stars Taipei