Lambert's story is one of determination.

New York City’s The Musket Room has the distinction of earning a Michelin star after being open for only four months, but if you’ve ever met chef and co-owner Matt Lambert, receiving this designation was inevitable. Lambert’s culinary story is one of starry-eyed and calculated determination, beginning in restaurants in West Auckland at the age of 14, and later crossing the pond to eventually open the New Zealand-inspired The Musket Room with his wife Barbara and restaurateur Jennifer Vitagliano. Of course, there were a few hiccups along the way—including heartbreak related to gingerbread cookies at the age of five—but as his story shows, resilience is the name of the game. Below, Matt Lambert’s journey, in his own words.

My mother was a home cook; I guess you could say I followed in my mother’s footsteps. We ate a lot of meat sauces over rice. I don’t know where she got it from, but it was likely a matter of making ends meet. My mother, as well as my grandmother, also did a lot of baking—cookies and that sort of thing—and that’s basically what got me into cooking. I remember when I must have been about five or six years old, I made gingerbread cookies and walked them to a girl’s house. (I was into her.) Turns out, she wasn’t home, so I left them with a next door neighbor. I don’t know if she ever got them.

When I was 11 I went to a restaurant in town that my grandfather knew of and asked the owner, Garry Bates, if I could have an apprenticeship. He said “Yeah, but not now, obviously”—I wasn’t old enough. I returned when I was 14, and started washing dishes in that restaurant; I eventually was granted an apprenticeship and worked there for three years.

Part of that apprenticeship paid for university; I attended culinary school at Auckland University. At one point I was the youngest person that had been accepted into the college, but it wasn’t because I was some culinary wonder genius or something, it was just based on the merit of Garry’s recommendation.

My goal was a blind ambition: to have a restaurant by the time I was 21 years old. When I was 20, my whole family moved to Wellington and purchased a café called Sun Seair, and we quickly learned that— f***—it was overly-aggressive. I thought I was an okay cook, but there’s more to running a restaurant than just cooking food. When the café went pear-shaped, I moved back to Auckland and had a better understanding that I needed to learn a lot more.

I began taking things a bit more seriously and got a job at a [now-defunct] local restaurant. I met chef Michael Meredith next door, who I think is the best in the business in all of New Zealand—he’s been a mentor to me ever since. At the time, I would often get sent to borrow things from him, and got frustrated that I was asking for things from the more organized guy who I would rather work with. A year or two later, Mike left to open his restaurant called The Grove, which would become regarded as one of the best restaurants in the country by the Cuisine Good Food Guide. I joined him there, and met my wife, Barbara, who was working the floor. 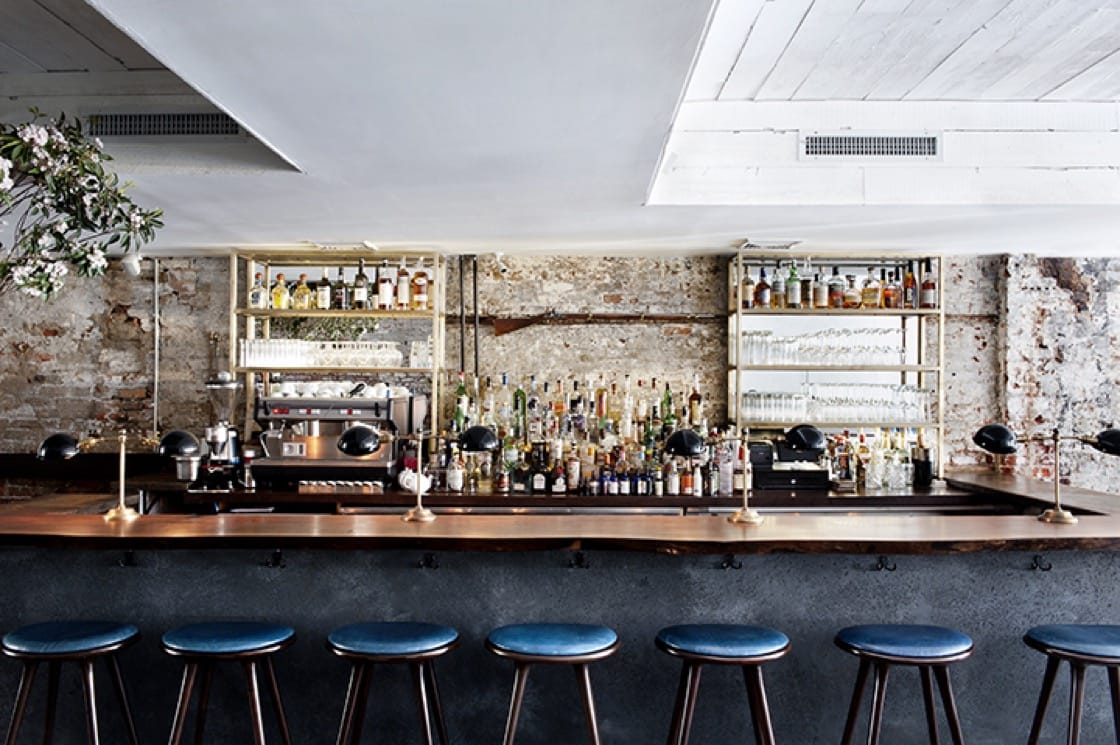 The bar at The Musket Room. Photo by Erin Andrews.

To further my career, I decided that I needed to leave New Zealand. After working for Mike, what was next for me there? If I did something in Auckland, it would just be a version of his food—it wouldn’t be original or mine. I figured that if I wanted to do bigger things, what better place to do it than in a city like New York. The MICHELIN Guide was also one of the reasons for the move; if I’m going to be putting in this kind of effort, I would like there to be some sort of barometer or measurement. (If you go to a Michelin-starred restaurant, you know that there’s no bullshit.)

I flew to the United states, and messed around in Connecticut for a couple of months to save up some money before moving into the city and working for AvroKO. I really wanted to open my own place. I had benchmarks—I wanted to be the head chef of a Michelin-starred restaurant by my 30th birthday, and by the time I reached that age, I was the head chef at the [now-closed] one-Michelin-starred Public. I also got the opportunity to open [sister restaurant] Saxon + Parole.

But this wasn’t why I moved to New York City. I wanted to put myself in a position where I can be in charge and call the shots and see what I was capable of doing.

I started working on a business plan in 2008, continually writing menus and refining things, eventually leading to the point where I wanted to make it happen. I started looking at spaces in Midtown and in Murray Hill, and I wasn’t feeling it. I really loved and was comfortable where I was working on Elizabeth Street—I like that it’s in Manhattan but it’s so, so chill.

My wife and our business partner, Jennifer, started a Kickstarter campaign with a goal of reaching $20,000. The campaign was a way for people to take part in the launch of the restaurant who couldn't make a larger investment. We anticipated that selling one of the options—a full buyout for up to 60 people including food—and that we would be good, but that didn’t end up happening. So it became a situation where basically anything would help. If we could get people involved before we opened then there would be a sort of neighborhood attachment to it, which we wanted. We didn’t want it to come across as pretentious. And we wanted to put ourselves out there so you could see who was doing it, because nobody knew who I was or gave a f***. I worked in the basement of Saxon + Parole and behind the scenes at Public for five years. I’d never even really been in the press.

And thankfully, after raising over $25,000 from 123 backers, we opened The Musket Room. 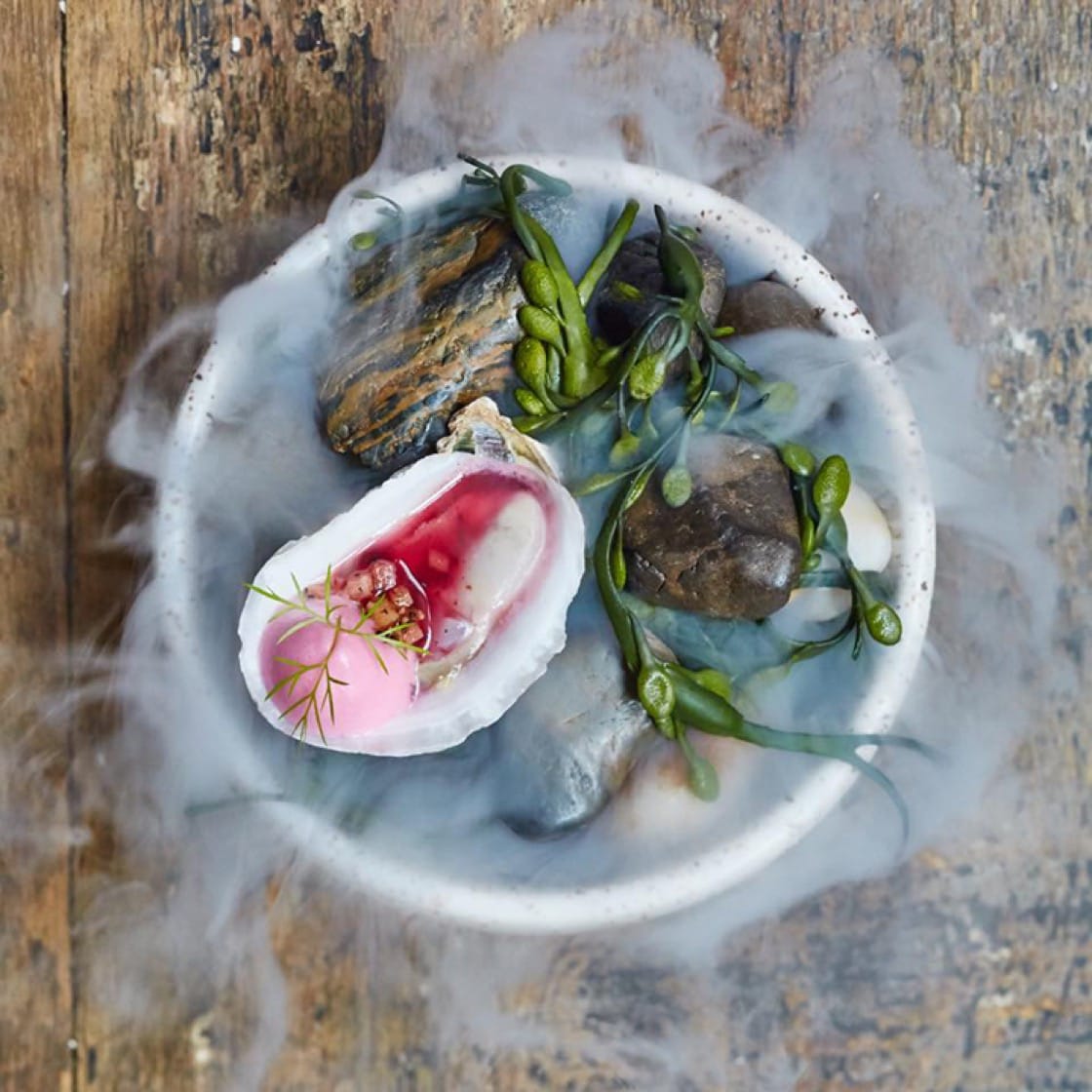 Lambert uses fresh, local ingredients as well as elevated techniques in his cuisine.

My perspective on cookery is influenced by New Zealand as I think we have an almost inherent dislike for tradition. For example, if you were in New Zealand in the 90s, there was always a non-traditional version of dishes at any given restaurant. I think that point-of-view enables you to to be more creative.

There was a definite element of fear during opening, as everyone at the time was opening up Italian restaurants or burger spots or bistros. Nordic restaurants were on trend. No one was really doing New Zealand food. It was really scary, almost too easy to f*** up.

But then, four months in, we got the Michelin star. It was one of the greatest days of my life—I was crying, it was awesome. If you’re a nerd about this shit you know when it’s coming out. I got the call, and I dropped the phone and screamed obscenities as loud as I could.

It may have been four months, but it was actually nearly 20 years.

Photos courtesy of The Musket Room unless otherwise stated.