“The experience at minibar allows us to do things that other restaurants can’t do,” says Jorge Hernandez of José Andrés’s two-Michelin-starred restaurant in Washington, D.C.’s Penn Quarter neighborhood. “Limits tend to go out the window.” 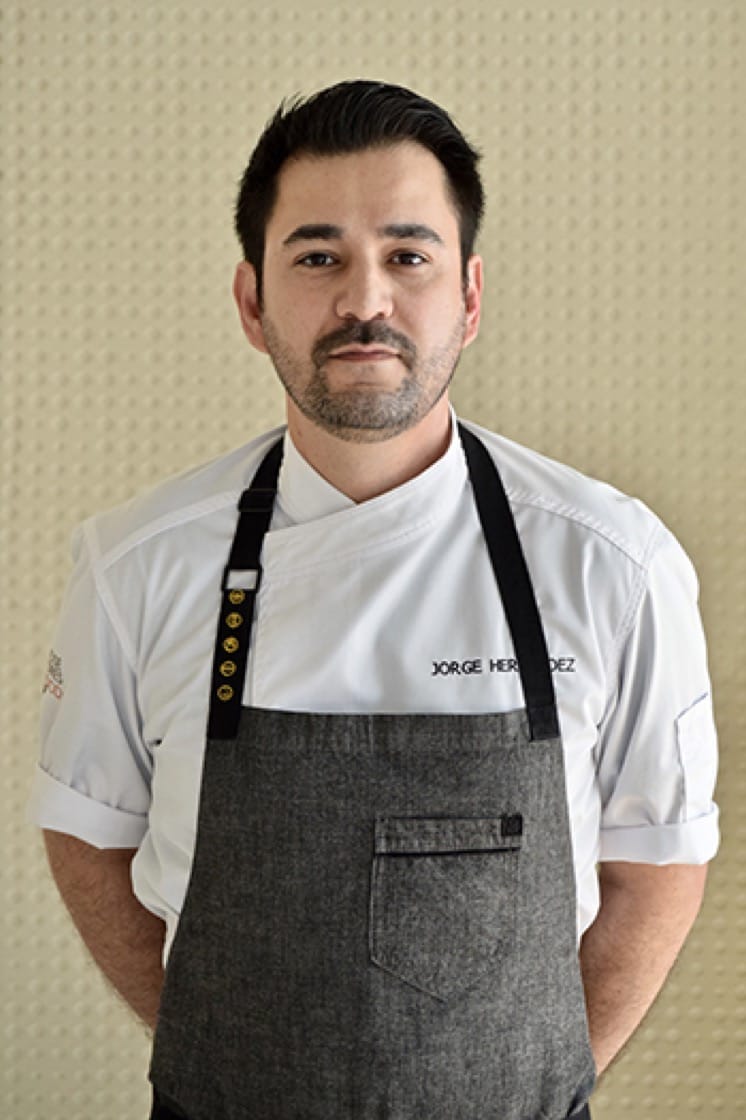 The son of Mexican-Greek parents, the San Antonio, Texas native grew up with many traditions where the food of his parents' cultures was the focal point. (The only time American food was specifically prepared was for Thanksgiving.) According to Hernandez, Greek Easter is “where it’s at.” He continues, “There’s a decent Greek population in Southern Texas.” During Greek Easter, Hernandez and his family spent two to three days cooking all the traditional fixin’s like roasted lamb, keftedes and baklavah, “the best thing ever.”

In 2006, Hernandez enrolled in the Culinary Institute of American in Hyde Park, New York, and began studying cerebral chefs like Ferran Adrià (he says, without hesitation, that the best meal of his life was at elBulli), Harold McGee and Pierre Gagnaire.

As luck would have it, Andrés along with ThinkFoodGroup's culinary creative director Ruben Garcia composed a demo at the CIA. “After the demo, I introduced myself and made sure I got Ruben’s card, and then bugged them until they gave me a job.” His fearless tenacity landed him behind the line at Zaytinya, Andrés’s Greek restaurant.

Now at minibar, Hernandez is responsible for the whimsical and progressive 20-plus course tasting menu served to any of the lucky 12 guests seated at the intimate counter (in addition to working on the company's various other projects from time to time). When it comes to the creative process of any dish on the menu, though it varies, a minimum of three to four people are involved. The year is divided up into what the team calls three creative trimesters—fall/winter, spring and summer. “At the end of one season, we’ll get the entire team together and have a brainstorming meeting, identifying products that we liked in the past or new products and then we do what we call, ‘demolishing the product,’” he says. “We never draw out a dish and say ‘this is how it’s going to look’—it doesn’t work that way for us, it’s more about exploring and finding the paths to go.” The chefs who aren’t demolishing the product are tasting the end result. Garcia—the “resident genius”—often lends a hand. “You can be working on something for months and months and he come in and give you direction and insight that you didn’t have,” Hernandez adds. 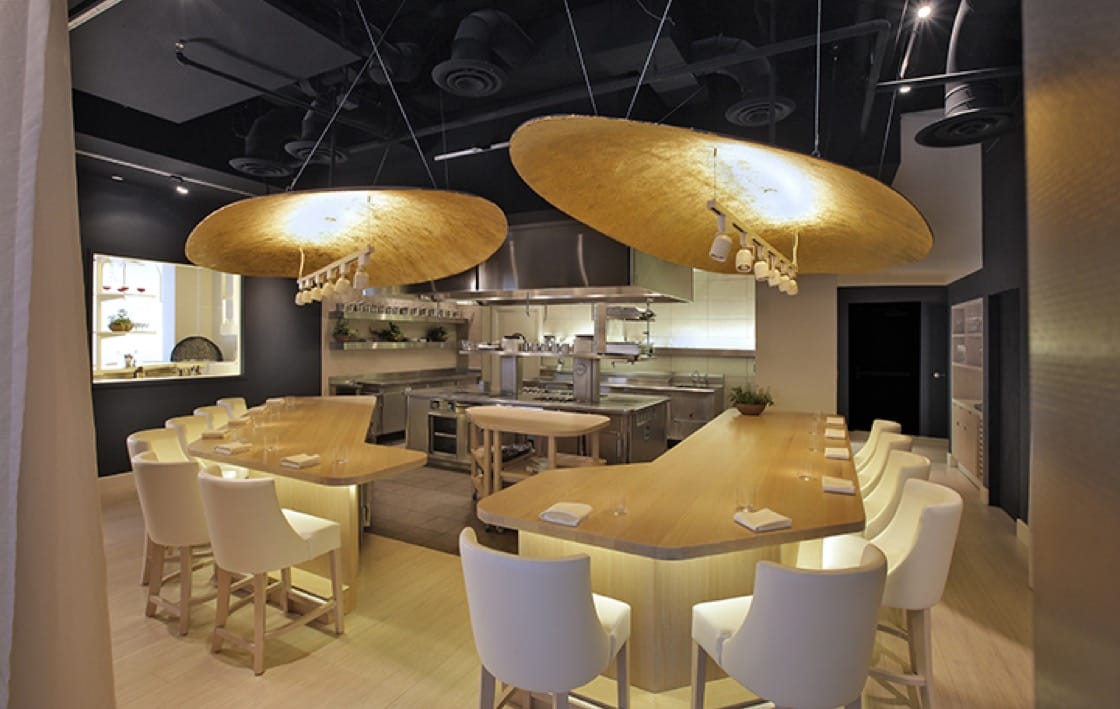 Once a clear and exciting concept has been devised, layers of flavors are added. “It starts to become a little bit more of what a chef does to make a plate,” he says, “but it’s definitely not ‘we need a rabbit dish so let’s do a rabbit dish.’ It takes time.” If an ingredient carries a short seasonal lifespan, it may not get used until the following year. Hernandez and team work with a particular Japanese varietal of Mandarin orange that is sourced from Southern California. “By the time we come up with a new idea and develop it, we have to wait—unless it’s preserved,” he says, noting that they are, in fact, ahead of the game. “At the end of the day, everyone wants to think that it’s a super romantic process and the fact of the matter is, it’s very methodical and laborious. We wait for that ‘wow’ moment, and if it doesn’t happen, we put it away.”

This arduous creative process is shared throughout each restaurant of ThinkFoodGroup. And the same tenacity that can be seen coursing through Hernandez’s veins can also be found in many of his colleagues’ who have the same (or longer) tenure. “Over the last 15 years, we’ve put a lot of work into how we develop [our] restaurants, concepts, dishes and menus—a lot of that goes through José himself, but also his ability to be a part of a team,” he says. “At the end of the day, it’s family.”

The TFG family, as well as the chef and humanitarian José Andrés himself, has kept Hernandez with the company for so long. “You see him on tv—that’s who he is, it’s not an act,” he says, adamantly. “He’s that genuine of a person.” Hernandez says the two share a similar food philosophy. “The idea of being able to tell stories and connect histories, the guy’s a history and science nerd and clearly a political junkie. The idea that you can do all of those things as a chef—he truly is one of the first chefs to embody that spirit.” He recalls Andrés getting a first edition of Escoffier in French and brought it into a staff meeting. “He said, ‘if you can’t read this in French, what good are you going to do for the future of food?’ He’s joking, but it’s truly what he means—you should be a student of absolutely everything if you want to work with food.” 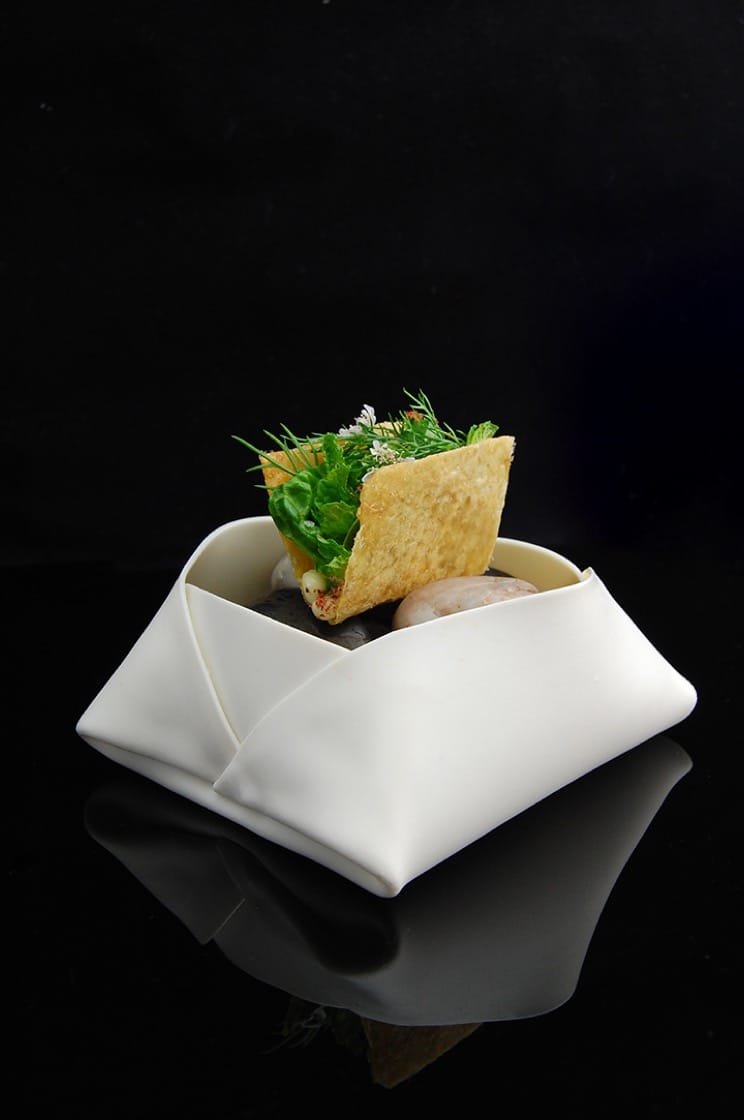 The chicken shawarma taco at minibar.

With the very recent opening of mega Spanish retailer Mercado Little Spain, which Andrés opened with the Adrià brothers in New York’s Hudson Yards last week, the r&d team has returned to more classic Spanish flavor profiles, like white beans and Ibérico pork belly. “No one would ever think of that at a two-Michelin-starred restaurant—I don’t know if we would’ve necessarily gone there if we weren’t doing r&d for other projects.”

Hernandez is also proud to be a member of the continually emerging D.C. food scene, stating he has many strong connections in the area and willfully has the back of someone he may not even know. Last fall, he shared a panel with chefs including Erin Clarke, Jeremiah Langhorne and Eric Ziebold, the latter of whom he has admired for well over a decade but had never met in the flesh. Hernandez was able to send a couple of his cooks to Kinship and Métier for staging opportunities. “It’s nice to be in a town where you help each other out,” he says. “I think maybe chefs here don’t think that form of competition benefits—you can get a lot more done if you work together.”

Though most of his eating is done at the restaurant—“we put a lot of effort into family meal”—or in the comfort of his humble abode, Hernandez will make trips to local haunts like Bad Saint and The Dabney. And he finally, finally, made it to Aaron Silverman’s Pineapple and Pearls. “I’ve cooked there twice, but I’ve never eaten there and it was absolutely amazing. There’s so much good food—I need to get out more.”