Born and raised on New York City’s Upper East Side, Franco V is a 34-year-old DJ-turned-pitmaster. In late July, he (who prefers not to be called by his given name) teamed up with industry vets Matt Abramcyk (Yves, Smith & Mills and The Osprey) and Nathan Lithgow (Café Altro Paradiso and Sauvage) to open Holy Ground, a barbecue speakeasy on Reade Street in TriBeCa.

Holy Ground is the first space outside of a backyard that Franco serves his barbecue, in a 59-seat basement dining room with dim hanging lamps and red booths set below Abramycyk’s street-level restaurant A Summer Day Café. Distinct dining areas—with names like the Chapel Room, Bunny’s Hideaway, and Foxy’s Lair—provide an enchanted setting for late-night gorging on Franco’s long-held tailoring of “New York-style barbecue.” 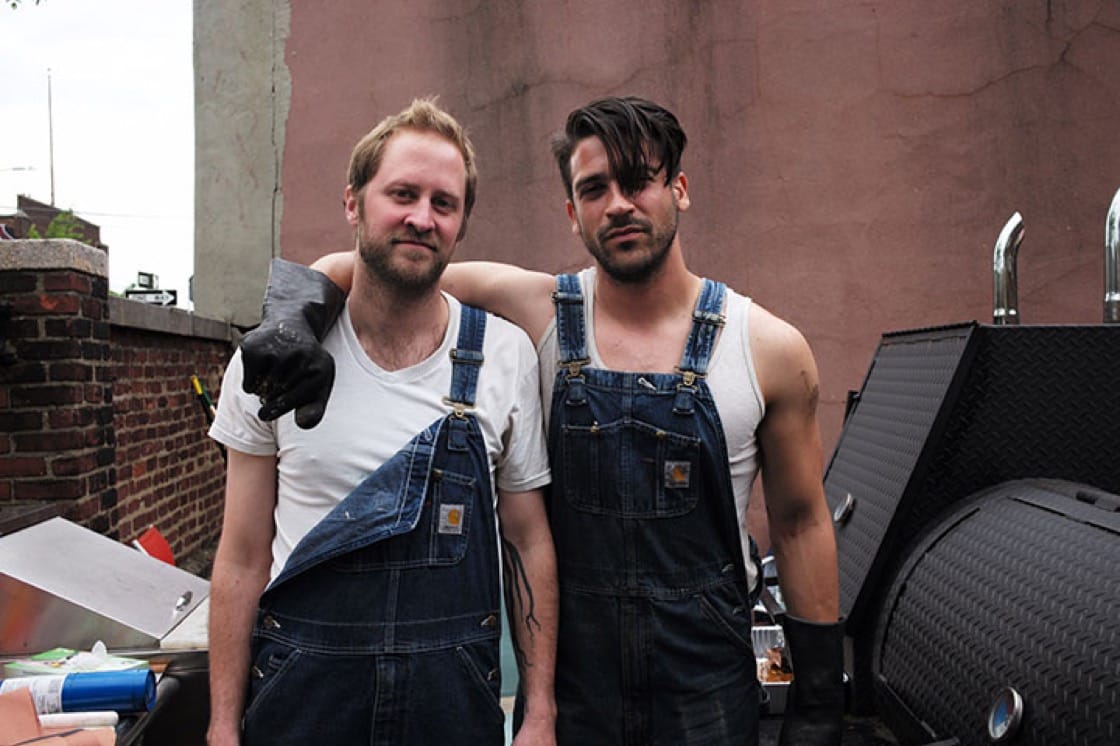 The eatery’s old-school menu and mahogany interior pay homage to historic New York steakhouses like 21 Club and Keens, featuring updated spins on cabbage and potato sides alongside brisket and pork shoulder entrées hot off the grill. Its “thousand dollar” dry-aged bone-in rib eye steak is actually priced at $130, but the name suggests the trio’s pride in serving it and their perception of its worth.

Before Holy Ground, Franco was manning a smoker outside of (friend and curator) Adam Shopkorn’s gallery, Fort Gansevoort, in the Meatpacking District, where he served sliders through a take-out window to hungry art collectors and downtown scenesters. Before that, his interest was purely homespun, sparked by his brother buying a smoker for his parents’ house in upstate New York some 15 years ago. “I just started messing around,” says Franco, “then I got sort of obsessed, started making sauces, rubs, researching smokers, all that.” 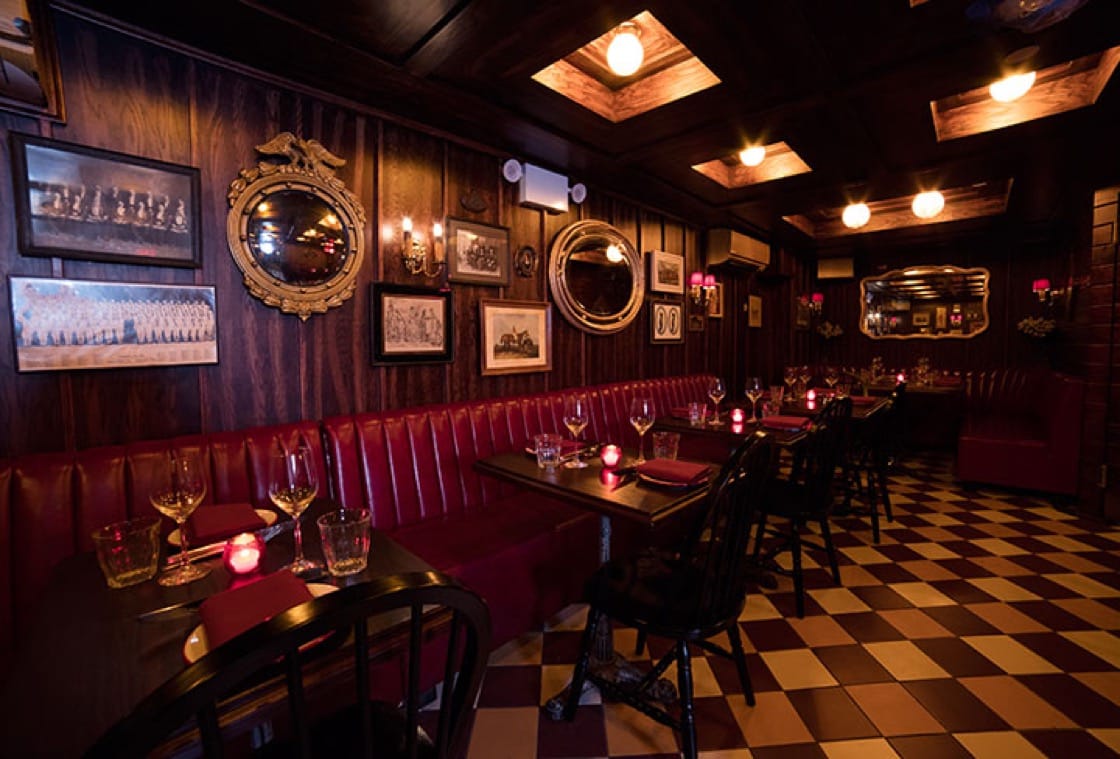 Franco got his official start when Shopkorn called him to help collaborate with the gallery’s opening. “Adam wanted to do a ‘pitmaster-in-residency’ program, like how galleries normally have artist-in-residency programs, and he knew I was into barbecue,” he says. Franco helped Shopkorn purchase a master smoker from Billy Durney’s Hometown Bar-B-Que in Red Hook, Brooklyn, and set it up in the gallery’s backyard.

It was a lucky coincidence and good timing that Franco himself ended up in the position of pitmaster in Shopkorn’s yard. “I was trying to get this pitmaster program going, calling places like the Kansas City Barbecue Society, going so deep into it,” Franco says. “We started to realize it was going to be expensive to bring chefs up to work the smoker, so when the first show was about to open, Adam asked me if I’d do it. The whole time I was eyeing the smoker just dying to cook on it, so that was awesome.”

For that first opening, Franco made pulled pork and chicken sliders—the crowds started pooling. “It just kind of picked up from there,” he says. “People just kept coming back for more food.” 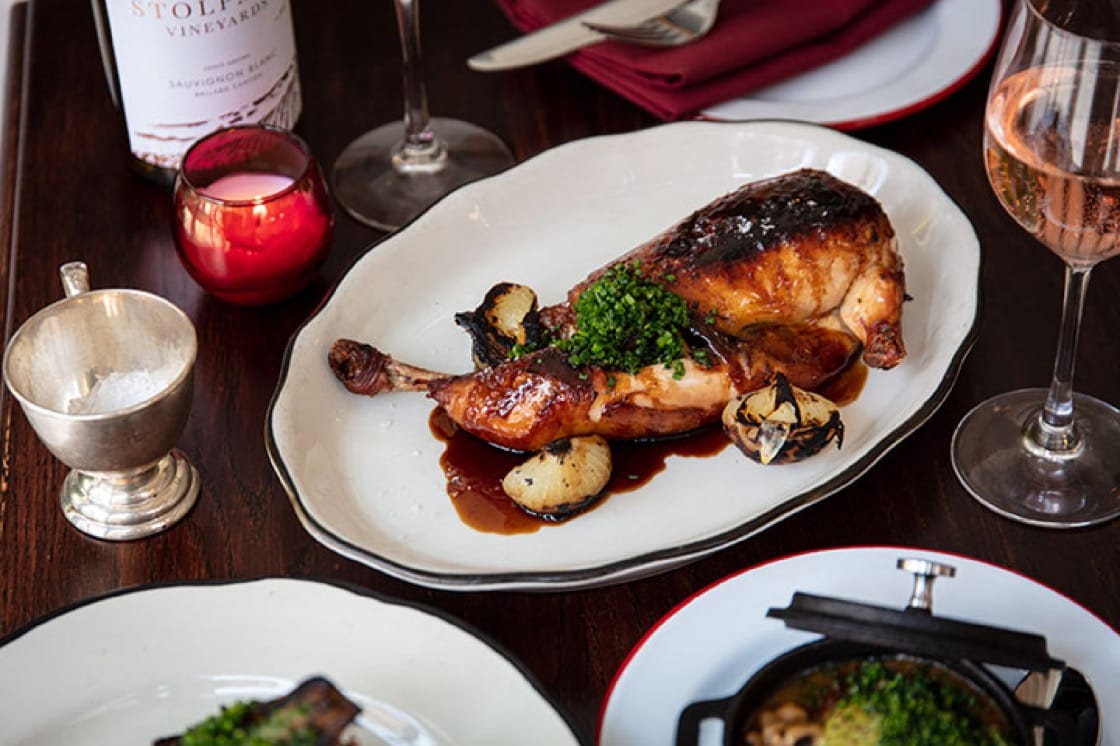 Whole-smoked chicken is on the menu at Holy Ground. (Photo by Henry Hargreaves.)

Franco continued running the Fort Gansevoort pop-up until Abramcyk called him to ask if he wanted to open a restaurant, which became Holy Ground. “I’d been friends with Matt for ten years and worked for him [as a bartender] at The Beatrice Inn [in the West Village]. Over the years I’d been bothering him to open up a place, going to see locations, but nothing ever fit right. Finally this spot fit and we did it.”

The eatery’s name recalls TriBeCa’s history, particularly a unique period during the 1700s when the area was owned by Trinity Church, and therein nicknamed “the holy ground.”

Its crossovers of talent are arguably of a supernatural sort. As a DJ, Franco worked with venerable companies like Sony, the Gagosian Gallery, Dior and Interview. At Holy Ground, he works alongside executive chef Tadd Johnson (formerly of Navy, The Smile and La Pecora Bianca) and Eleven Madison Park alum Matthew Hunter who runs the restaurant’s pre-Prohibition-inspired bar program, ensuring the atmosphere is just as fun as any clubs or pop-ups he’s ever been in charge of spiriting.

For the food at Holy Ground, Franco uses a barbecue sauce that he’s tweaked over the last 10 years in various settings. “None of the other guys have this recipe,” he says. “I just go in there and make it from off the top of my head.” For now, the recipe stays with him.