The MICHELIN Guide Spain & Portugal 2020 selection has been released, featuring a grand total of 241 starred restaurants, 30 of which are new.

The Cenador de Amós, a charming mansion-palace lying in the Catabrian village of Villaverde de Pontones, has deservedly reached the three-star distinction. MICHELIN inspectors have declared that chef Jesús Sánchez has achieved the maximum honor for “his tireless search of emotion,” compelling the guest to gradually discover his proposal, so to enhance even more the different spaces of the venue and all those details that leave a mark in a culinary experience. They raise this restaurant to the category of gastronomic temple and especially emphasize its respect to Cantabrian flavors, making them recognizable and fully expressed in every dish.

“We are witnessing the consolidation of haute cuisine in both countries, with a surprising dynamism in regions including Andalusia, Valencia and the Canary Islands," says international director of the MICHELIN Guides Gwendall Poullennec of the evolution in the area's cuisine. "As for trends, we have verified how hotels progressively give more strategic value to their gastronomy, and how more chefs opt for a creative fusion cuisine, adding to their menus exotic details and ingredients typical of Peruvian, Mexican and Japanese dishes. And it's satisfying to see how Spain and Portugal join the global culinary trends, giving more prominence to fermented foods, vegetarian menus, proximity produce and sustainability—the gastronomic excellence of these two countries keeps on growing, and the creativity of their chefs shows a permanent stir.”

The new Spanish establishments in the two-star category are: Angle, in Barcelona, where chef Alberto Durá has committed himself, in line with the instructions devised by the super chef Jordi Cruz, to the approach that they describe as “haute cuisine for everyday;” Noor, in Cordova, where Paco Morales redefines, after a deep revision of the culinary evolution in Andalusia, the flavors and aromas of the Andalusian cuisine of yesterday; Skina, in Marbella (Malaga), where the young chef Mario Cachinero deploys his talent to build a creative cookery that comes to evolve traditional Andalusian fare; the restaurant Bardal in Ronda (Malaga), where chef Benito Gómez is committed to a creative cuisine with recognizable flavors; and, finally, El Poblet, in Valencia, a restaurant with a surprising combination of the classic dishes of master Quique Dacosta with the ones of Luis Valls, a prominent pupil who emanates personality and is finding his own way in the current Valencian cookery. 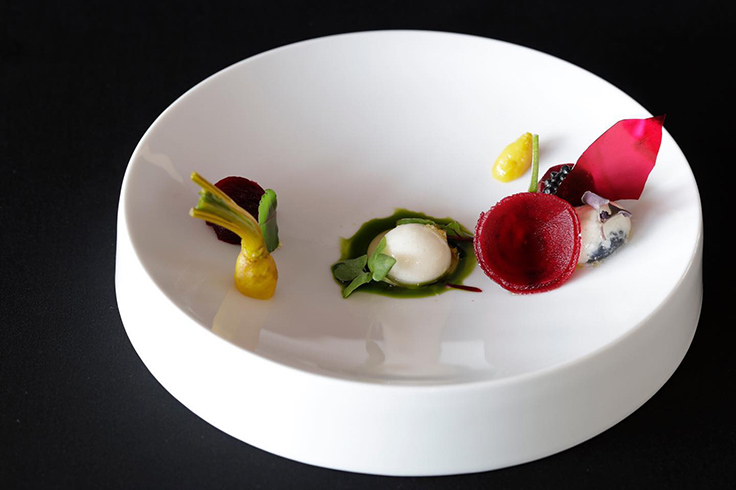 In Portugal, the MICHELIN Guide is delighted to recognize Casa de Chá da Boa Nova with a second star, located in Leca da Palmeira, a stone's throw away from Porto. It has captivated the inspectors with the venue’s sheer singularity, over the Praia da Boa Nova rocks, as with the intense proposal of the Portuguese chef Rui Paula, who plays with memory, modern techniques and local products to give a true Atlantic flavor to his plates.

“This edition, with 23 one-star novelties, we have witnessed the consolidation of Andalusia (Dama Juana, by chef Juan Aceituno, in Jaén; and Mantúa, by chef Israel Ramos, in Jerez de la Frontera) and the Valencia area (chef Begoña Rodrigo's La Salita in Valencia; and Tula, of chef Borja Susillo, in Xabia) as gastronomic reference points with their own personality," says director of the MICHELIN Guide Spain & Portugal José Vallés of the new one-starred establishments. "We have also seen an increase of haute cuisine in the islands, areas with a high touristic relevance, committed to a quality gastronomy as a distinguishing factor to appeal visitors. With this approach, it’s possible to find new one-star establishments in Balearic Islands (Voro, in Canyamel, Majorca, where chef Alvaro Salazar executes a reference-free cookery; and Es Tragón, in Sant Antoni de Portmany, Ibiza, a surprising place with the casual touch of chef Alvaro Sanz). Also in the Canary Islands, La Aquarela, in Arguineguín, with chef Germán Ortega; and Los Guayres, in Mogán, in the hands of chef Alexis Alvarez, both restaurants being in Gran Ganaria.”

The team of MICHELIN inspectors, aware of the culinary level in each country, thinks appropriate to emphasize the spread of restaurants specializing in haute cuisine are getting progressively broader and with more variety. Backing this perception we find, almost everywhere, new restaurants deserving the one-star status. Inside this edition the inspectors noted the coveted distinction to the new proposal of chef Martín Berasategui in Ola Martín Berasategui, of Hotel Tayko, Bilbao; the Cartagena roots of chef María Gómez, expressed in the unique proposal of the restaurant Magoga in Cartagena (Murcia); the avant-garde commitment to vegetables and wild herbs by the young chef Leandro Gil in La Biblioteca, inside Alma Hotel in Pamplona; the culinary creativity wrapped in design and wine scents, suggested by the restaurant Taller in the Arzuaga Hotel and inside the same-name winery in Quintanilla de Onésimo (Valladolid); dishes displaying theatrical touches by chef Josep Moreno at Deliranto in Salou (Tarragona); the wonderful culinary approach of Iván Cerdeño in a bucolic ‘cigarral’ in Toledo; or the new concept of chef Javier Aranda at Retama, the gastronomic restaurant of Hotel La Caminera, in Torrenueva (Ciudad Real).

As for Portugal, there are two Lisbonese restaurants that stand out in the 2020 edition: EPUR, in the hands of French chef Vincent Farges, and the impressive panoramic restaurant Fifty Seconds, situated in the top of famous Vasco de Gama Tower and managed by the prestigious Spanish chef Martín Berasategui. The two other newly awarded restaurants in Portugal are: Mesa de Lemos in Passos de Silgueiros, the wine region to the south of Viseu (Beiras), and headed by the young chef Diogo Rocha; and Vistas in Vila Nova de Cacela (Algarve), where the famous chef Rui Silvestre keeps on delighting his guests with imaginative cookery.