Swedish brewers are making a name for themselves in Gothenburg.

Traveling along the Göta älv river in Sweden—from which the city of Gothenburg (Göteborg) takes its name—our boat comes to a gentle stop and we begin the walk to Vega Brewery. It's an unlikely path through a heavily industrial area: we follow rusted, disused train tracks and crunch through gravel interspersed with broken glass, all while gazing up at the numerous elaborate graffitied murals covering the neighborhood's warehouse walls.

The boat ride and the brewery crawl it's facilitating are among the first events held to kick off the annual GBG Beer Week, a celebration of both Swedish beer and Gothenburg, an industrial port city with plenty of warehouse space perfect for housing breweries, has become known as the craft beer capital of the country. According to data supplied by the Swedish Brewers Association, Sweden is in the midst of a full blown brewing renaissance. There are now over 380 breweries operating in the country, and some of the best are in Gothenburg. (Three beers from Gothenburg breweries made it into the top 50 of RateBeer's Best New Beers 2016 list.) This is a far cry from what Sweden's beer industry looked like until just a couple decades ago.

According to the Oxford Companion to Beer, the anti-alcohol movement that burgeoned in many countries during the 19th century led to the rise of the Swedish government-owned retail monopoly known as Systembolegat, an entity on a quest to shield people from the dangers of alcohol, while also supplying it to them. "The Monopoly," as it's referred to, set a limit on the maximum ABV of beer and made it difficult—if not nearly impossible—for Swedes to purchase beer made internationally. In the 1990s, Sweden's brewing industry was practically dead, with as few as 20 breweries operating in the entire country and limited options.

Thankfully for Sweden's beer community, one of the conditions of joining the European Union in 1995 was the abolishment of the restrictions imposed on high ABV beers and imports. By 2011, Systembolegat was carrying over 1,000 beers from 54 countries. Enthusiasm for good beer is particularly high In Gothenburg, where a large population of young drinkers (and two universities) are said to spur demand. In addition, the city has a thriving dining scene, where restaurateurs love to highlight local products, including beer.

However, the credit for the current state of the beer scene should primarily rest with Swedish brewers, who are making Swedish beer for Swedish tastes. According to Kalle von Spreti of Vega Brewery, Gothenburg's beer scene has a collaborative spirit, but brewers are driven by a desire to make beer that accommodates their own particular palates. "We've got so many good brewers in the city, and of course we help each other out with recipes and so on, but [we tend to make beer to suit or own preferences]." 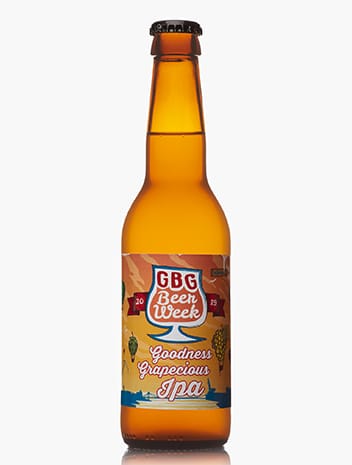 Those personal preferences among brewers lead to a variety of styles. Vega's primary lineup is easily recognizable—IPAs, amber ales, porters and the like—but their official GBG Beer Week beer, Goodness Grapecious IPA, is a sweet and hazy New England-style IPA made with grape must that shows a distinctive bent toward experimentation. Meanwhile, just a short distance away from Vega, O/O Brewing is producing exquisitely clean yet full beers that derive flavors primarily from malt, yeast and hops. Their own New England-style IPA, Narangi IPA, is a hazy juice bomb that tastes strongly of oranges despite having no added fruit, and was one of RateBeer's top picks of 2017. Also nearby is Spike, located in an old slaughterhouse that's made a name for itself with its wide variety of styles and inventive (sometimes limit pushing) labeling.

According to Spike co-owner David De Courcy, "For all the breweries that have kind of been on [IPAs] for a while and making a lot of hoppy beers, everyone should have a little pilsner."

Scandinavian food and beer has been rising in prominence for more than a decade. And in Sweden—and Gothenburg in particular—the craft beer boom shows that the region will continue to draw the beverage world's attention.

The Best Restaurants in Gothenburg, Sweden

Looking for a Michelin-starred restaurant in Gothenburg? Here’s where to go.

Zooming in on Three Stars: Frantzén in Stockholm

Taking a closer look at the newest three-starred restaurant in Sweden.

We’re celebrating the milestone with the launch of the Nordic Guide digital platform.

The First Day I Got My Michelin Stars: Björn Frantzén of Frantzén in Sweden

First Day I Got My Stars Sweden