L’Appart: A Hidden Gem Inside a NYC Food Hall

Diners are enveloped in an elegant, private homey atmosphere, meant to evoke a chef’s apartment, in this exclusive Michelin-starred restaurant.

At the tip of Manhattan, diners walk through the bustling Le District market/food court, past the pastries, meats, fish, imported sauces and mustards until arriving at a discreet door. It’s marked L’Appart, the colloquial French expression for ‘apartment.’ Once inside this approximation of a French chef’s apartment, the hospitable staff takes coats, introduces themselves and offers a welcome Champagne. 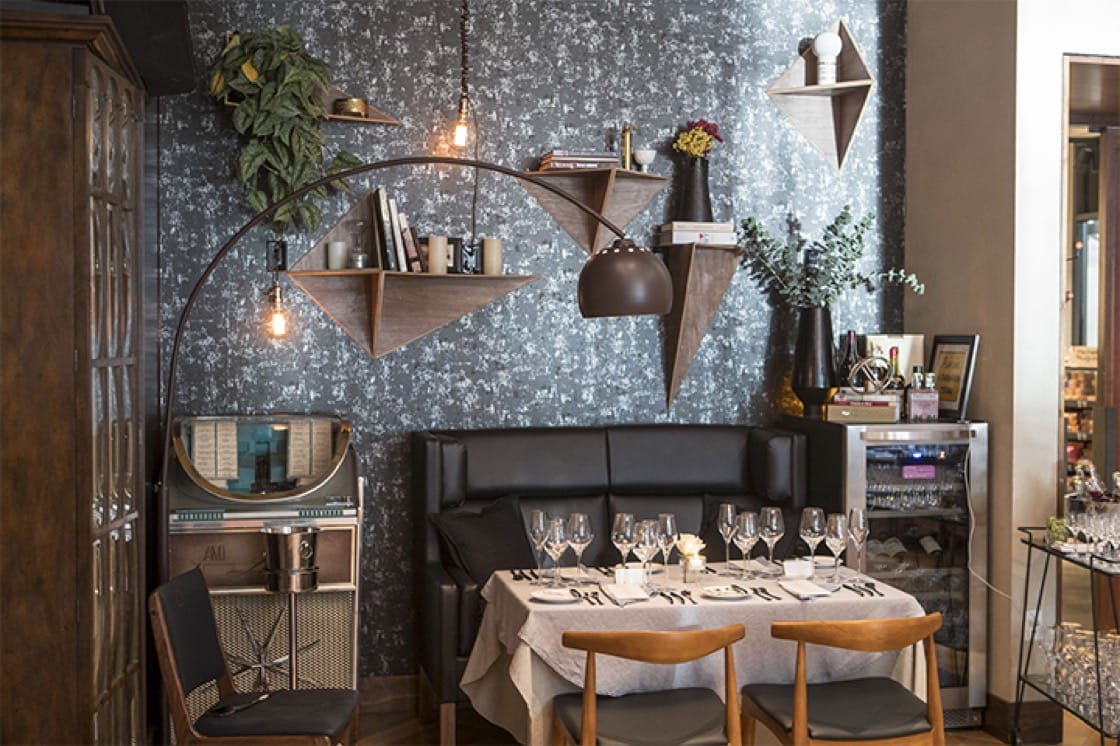 The diners are here to experience a one-Michelin-starred tasting menu in the capable hands of executive chef Nicolas Abello, whose formidable resumé includes the likes of Gerard Vié, Pierre Gagnaire and Daniel Boulud.

“We want people to enjoy their time here and feel like they’re at home,” says Abello, who has fond memories of convivial family dining experiences while growing up in France. “In my family we had a lot of long family lunches that would start at noon and finish at six. People could stand up from the table and go into the kitchen and talk to my mother or father or go for a walk. Then we would sit down again at eight and maybe eat a salad.”

At L’Appart the table is yours for the night. “It’s a French idea,” says Abello.

Abello has been practicing since he started as an apprentice at 15 at a country club near Versailles. Not long after, he went to the two-starred Les Trois Marches of Gerard Vié. “It’s stressful when you arrive for the first time in a Michelin starred restaurant,” he recalls. “I was very impressed with everything: the silverware, the plates. There were three cheese carts with 80 to 100 pieces of cheese on it every day. There were 15 different breads on a bread cart. I had never been in a Michelin starred restaurant before.” He kept asking himself, “Where am I?” He put his head down and went to work. “It’s where I learned all the French basics,” he says. 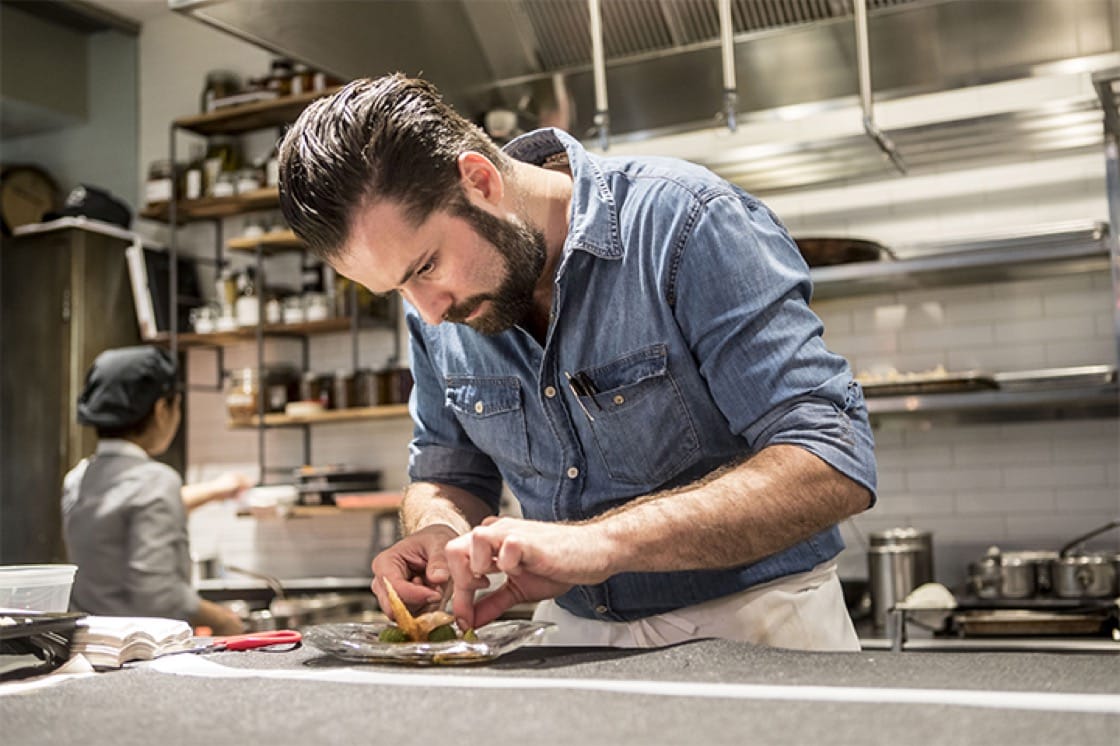 Then he was off to London to work with Pierre Gagnaire. Then back to Vié in France for two more years. But New York City was calling. “I thought it would be very exciting,” he says. “I went on Daniel’s website and applied directly.” He got a job. “It was a really good choice. I was a line cook the first year and a half, then a junior sous chef, then a sous chef at the fish station. I also did some work at Feast & Fêtes and banquets.”

Once again, he returned to France, but for a short time. Then in 2015 Le District called him and he couldn’t resist the idea of returning to mighty Manhattan. He helped open the pastry and various sections of Le District, which is frequently described as the “French Eataly.” Inside Le District’s main restaurant, Beaubourg, there was a small room that was sometimes used for private events. It lacked a real purpose and the staff was kicking around ideas of putting it to better use. In 2016, it was transformed into L’Appart.

After the hors d’oeuvres, a trio of entrées start to appear. A beef cheek tortellini floats in a flavorful consommé and is balanced by a Côtes du Rhône. Next comes Dover sole with chorizo and clams and a white Burgundy. Finally, venison with parsnips, apples, and juniper with a Portuguese Syrah blend.

Somewhere along the way a saucer of house made cultured butter flavored with acacia honey and fleur de sel is presented with a multigrain bread. Resistance is futile.

Abello describes his food as modern French. “The basic tradition and technique is French. But we might use a spice from India or ingredients from Mexico. There are no rules. It’s not Chinese or Italian. It’s French but from everywhere. And we depend a lot on the seasons. I like to go to the market to see what’s available. There are some imports like blue lobster from France and langoustines from Scotland, but otherwise very local. I was surprised how much was available when I first came here.” 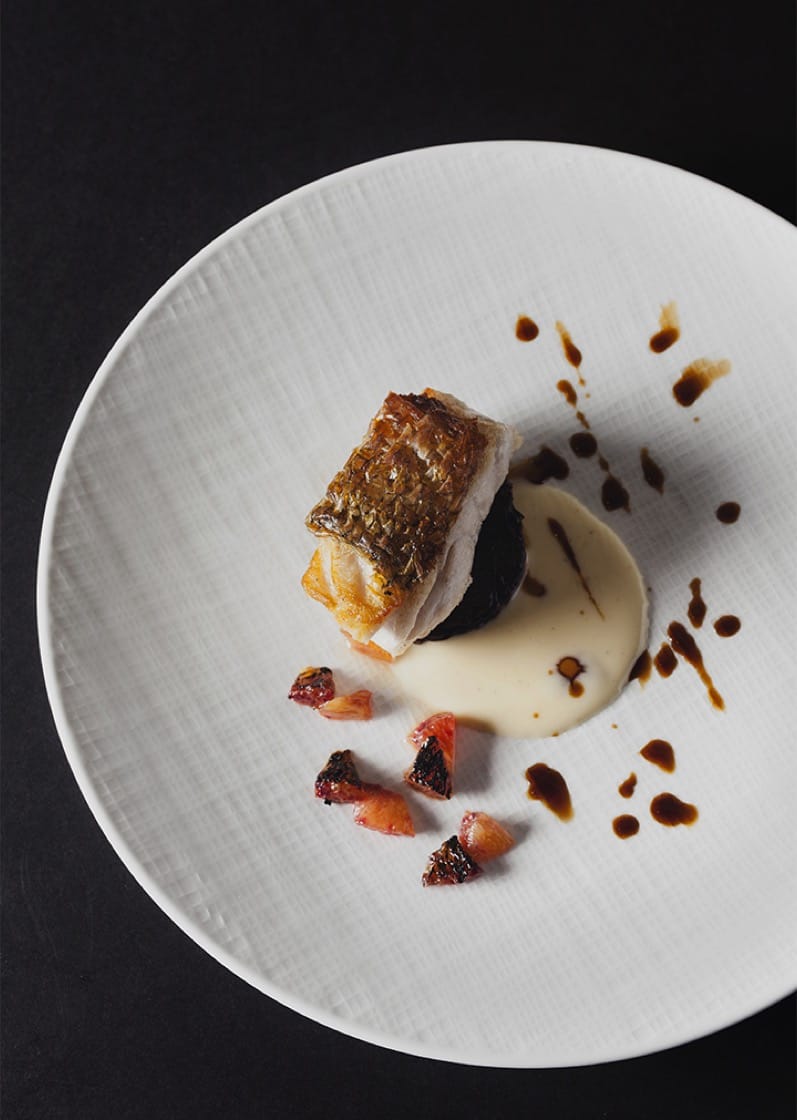 Somehow interspersed in his impressive resume, Abello says he traveled a lot in his 20s and 30s throughout Europe, Asia, North America and Africa. “I even spent one month in Brazil so I could taste what they are doing.”

Whether or not anyone has saved room for dessert, it will come. Arresting flavor combinations of grapefruit with lychee sorbet and cilantro; chestnut ice cream on a bed of candied chestnut with a hint of Cognac and topped with coconut foam; chocolate with roasted banana sorbet, banana crumble, and candied pecan. And one more wine, a dessert Cour-Cheverny from the Loire Valley.

As the night wears on guests at some of the tables may begin to talk to each other. The staff offers to take pictures. “One Saturday night, we took a picture of a couple with a Polaroid, so they have a souvenir to put on their fridge. You remember your moment. It doesn’t just get lost in your phone,” he says. “One night two couples started to dance. That’s magic.”

Getting a Michelin star was magic, too. “Our goal was not to have a Michelin star. We got it and we are very happy to have it. I was surprised. It was a great feeling. After you have it, it’s pretty dangerous because you don’t want to lose it. Then you say why not try to get a second one?”

When the stars were awarded in 2017, they got one star again. “First, when I received the invitation to go to the cocktail, I wasn’t sure if we would keep the star. But whatever happens, I asked the Michelin organization if I could bring all my team—BOH and FOH—to the ceremony,” Abello recalls. “The day of, I received a call from Michelin saying we kept the star. We all went to the ceremony and after that we went to a cozy restaurant to celebrate together. It was a beautiful night! It was great to celebrate with the all team—keeping a star is team work!”

They hope there might be a second star in their future. But Abello says the important thing is to just “continue to cook and make sure we’re happy and make sure the guests are happy.”

All photos courtesy of L'Appart.