On the day of interview, Isabella Chen, the cheesemaker of Lab Man Mano, followed her cold chain logistics company to a farm in Taoyuan, where it is picking up fresh raw milk for her workshop. It was the first time she was working with the logistics company which she had picked after much deliberation. Chen didn’t let her guard down for a second and followed the produce every step of the way.

“Fresh milk gets contaminated very easily. At soon as the temperature reaches 10°C , the bacteria inside will multiply quickly,” she says. As the first supplier of fresh Italian-style cheese in Taiwan, she takes care of her products as tenderly as a mother tends to her child. To her, freshness and good taste to her are paramount. No small detail is overlooked every time she sends off a batch of products.
Miniature Cheese Workshop

Before Chen decided to entrust her produce with a cold chain logistics company, she personally undertook the transportation responsibility. On the days when she made cheese, she would drive a refrigerated vehicle to go from Twatutia, Taipei, to Taoyuan and back, taking a 100kg of fresh milk all by herself.

At 7am, the cheese workshop gets moving. The milk goes through pasteurisation once it arrives at the shop. As it gets chilled, lactobacillus and rennet are added. The process of rottura is crucial. This procedure is usually performed by the most experienced cheesemaker to separate the curd from the whey. Timing and fineness are everything in curdling. The texture of the cheese could go horribly wrong if it was done incorrectly. 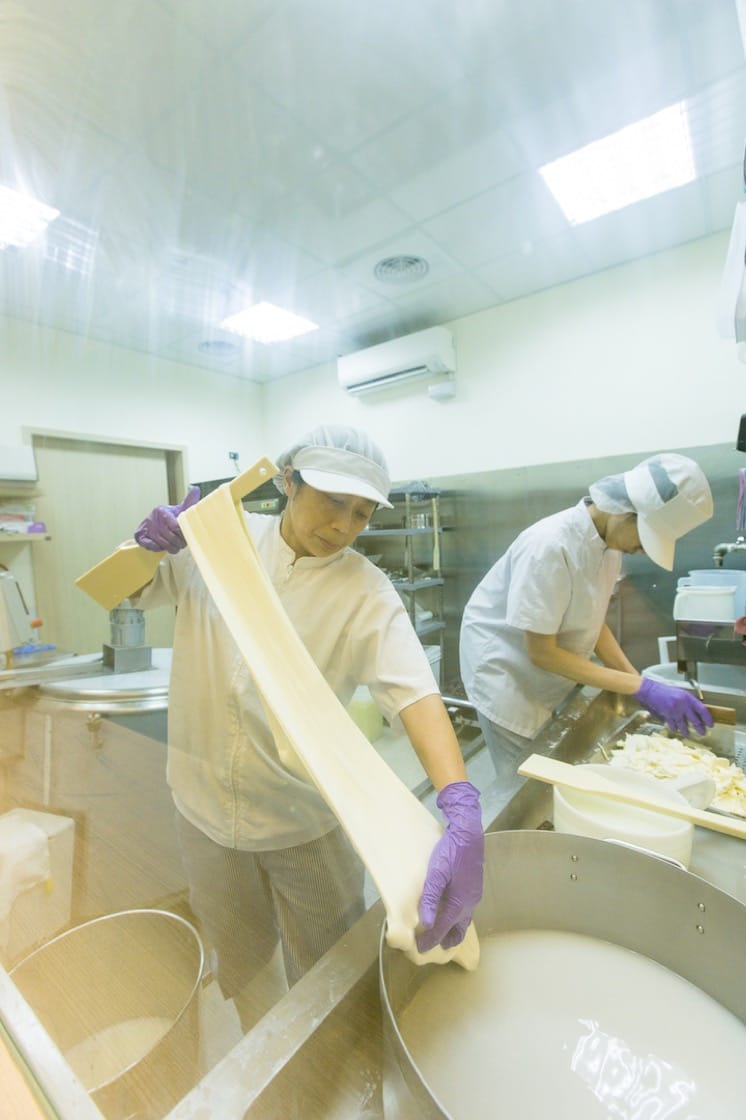 Chen pulls and stretches the curd in hot water of 95°C, kneading and shaping it like dough.
Advertisement
Advertisement
Around noon, the curd would ferment to reach a certain level of acidity. “Fermentation takes time. There’s no rushing it. While waiting for the lactobacillus to do its job, we have to get all the other tasks done, like having the packaging ready and arranging delivery for the cheese,” Chen says. When she is certain the cheese is good to proceed, pasta filata, the most magical part of cheesemaking, begins. In the afternoon, Chen has to first pull the curd in hot water of 95°C, stretching it like dough, and roll out balls of mozzarella. Another signature product of hers is the burrata, a variation of mozzarella with creamy stracciatella folded inside the tender skin, comparable to xiaolongbao and very popular these days.

Working for more than 12 hours a day, Chen jokingly declares herself “more like a cleaning lady than the romantic artisanal woman in many people’s imagination”. There are only six to seven square metres of space between the glass window at the entrance and her workshop, delineated by a bar table. Within this tiny space, Chen is constantly fighting against time and temperature to ensure freshness.

Among the 10 or so types of cheeses produced here, every one of them is a favourite of certain Italian chefs and local gourmets in the city. It’s not an exaggeration to view Lab Man Mano as the birthplace of fresh Italian-style cheeses in Taiwan, with Chen being the mother doing all the hard work to bring them to life. 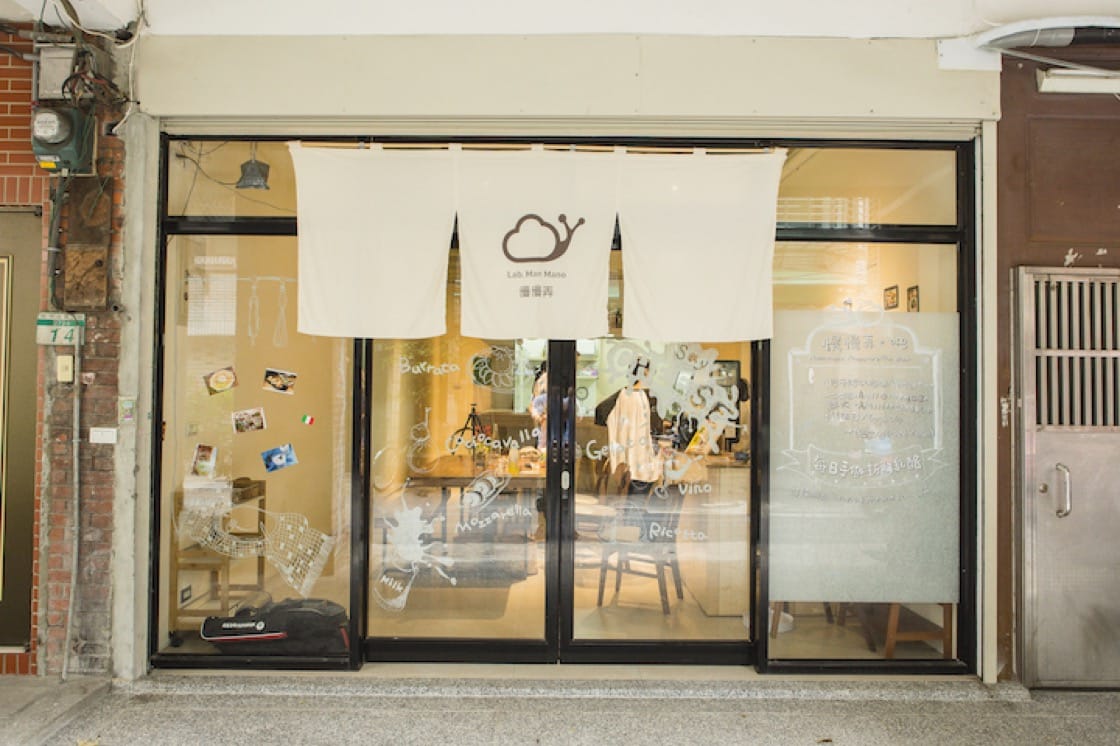 The shopfront of Lab Man Mano
One Cheese, One Love

Chen, who used to make a comfortable living in the media industry, started from ground zero in cheesemaking at 40 years old.

She was inspired by an online video, in which she saw how mozzarella was shaped in hot water and became deeply intrigued by it. Then she discovered burrata and fell even more deeply in love with this creamy sibling of mozzarella.

This propelled her go to Japan and Italy to learn the techniques of making the cheeses. Her painstaking shokunin-style training in Japan couldn’t be more different than her time in laidback Italy. Regardless of the hardships, she was determined to learn the production process of the complicated burrata.

“Taste is the most important attribute in food,” she notes. Although money and profitability are major factors of consideration, she doesn’t waver from quality, “If you do what other people do, it will come down to a war of price in the end and nothing more.”

That’s why Chen put a snail on the logo of Lab Man Mano. She is insistent that the “human waits for food”, not the other way round. To recreate the original cheesemaking environment, she found an importer to buy some equipment, and carried the rest herself from Japan and Italy. She even wanted to import a specific breed of cattle and have a farm raise it for her.

Her next step is even more ambitious: she wishes to build a system of HACCP (Hazard Analysis and Critical Control Points) to monitor food safety, combining the Italian and Japanese working procedures. Another plan is to introduce a “cheese sommelier” course. To Chen, the boundary of her passion for cheese doesn’t seem to exist.

In the eyes of this strong-willed cheese artisan, all her “kids” have a bright future on the dining table. It’s also in her mission to bring Taiwanese food culture on par with Japan’s. 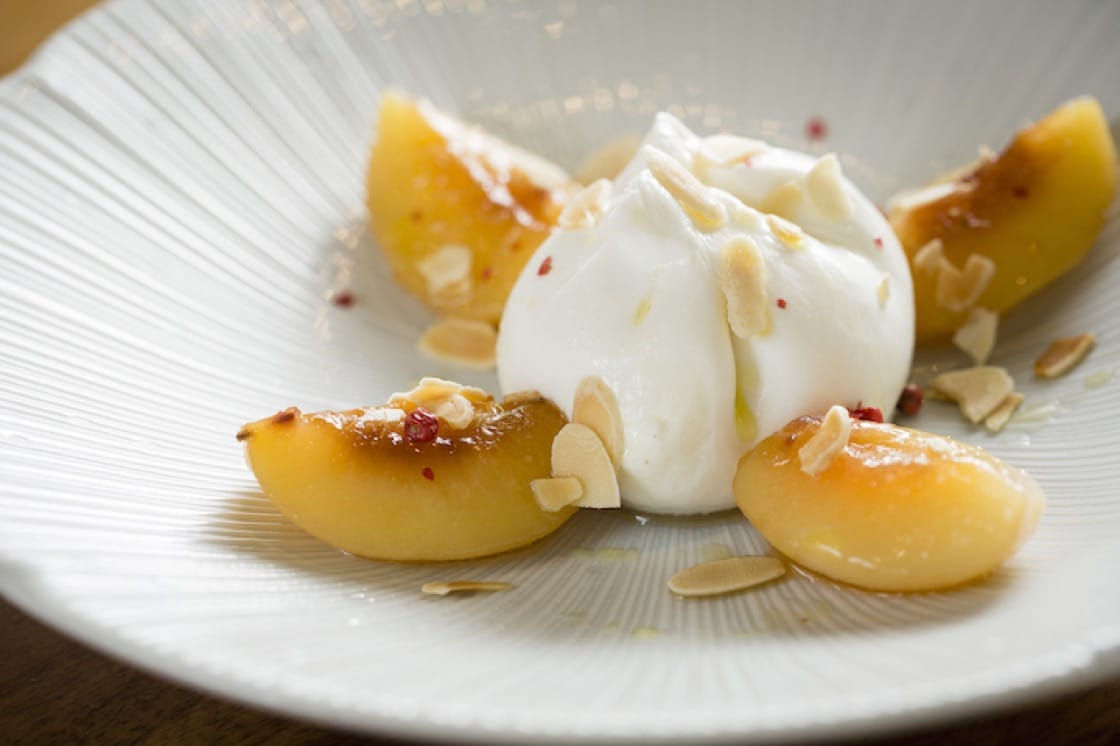 Burrata with almond and peach

“Burrata is so originally Italian and it’s perfect for beginners. It is silky and pairs well with cuisines from various countries, moldable and easily acceptable by Taiwanese people. Aged caciocavallo works very well beside meat dishes or roasted vegetables with its deep aromas. Many people fall in love with this cheese which is underrated even in Italy,” Chen says.

At Lab Man Mano, she serves burrata with mango. Her ricotta ice cream employs smoked cheese to strike a unique balance of sweetness, milkiness and smokiness. Even mozzarella gets a Taiwanese spin, complemented by millet wine to surprise the customers.

Does she feel partial to a type of cheese? Just like how a mother with many kids would say, she proclaims they are all her babies and loves them equally.

At the end, Chen has one more secret to share: “Do you know lightly charring the surface of burrata with a blow-torch would give you a similar taste to a sole fish skirt nigiri?”

This article was written by Drew Zheng and translated by Vincent Leung. Click here to read the original version of this story.
Advertisement
Advertisement

Night markets Taipei Behind The Bib