Born in Fukuoka, Takayama began his culinary career when he was only 18. After a decade working in Japanese restaurants, he headed to France to further hone his skills. There, he worked in the MICHELIN-recommended Le Charlemagne and three MICHELIN star restaurant Maison Lameloise. He went on to cut his teeth under the tutelage of various influential chefs, such as Gilles Tournadre of two MICHELIN star Restaurant Gill and Regis Marcon, owner of the three-starred Regis et Jacques Marcon. Upon returning to Japan, he joined the team at one-starred Maison de Gill Ashiya (now renamed as Maison de Taka Ashiya). Under his leadership, the Japanese culinary team won the championship in the illustrious Asia-Pacific Bocuse d'Or and emerged top five in the international Bocuse d’Or culinary competition. 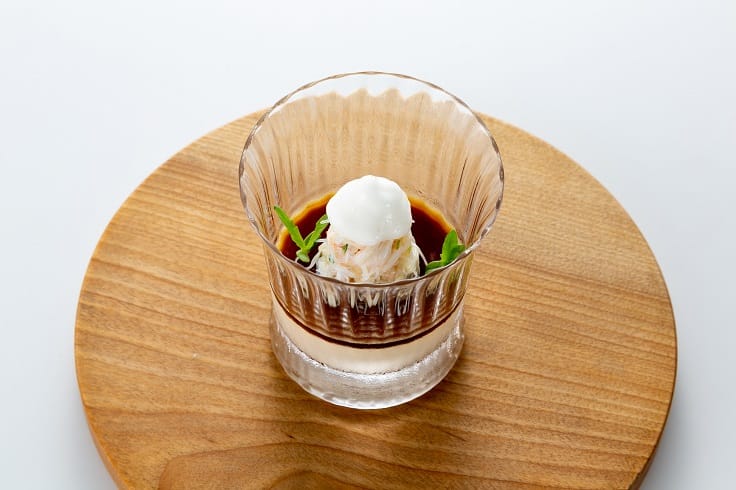 Takayama's dishes are a flawless display of impeccable French cooking techniques combined with the elegance of Japanese subtlety. A signature dish of Crab Pudding With Ginger And Tarragon Essence involves placing a layer of tomato consommé foam on top of a delicate pudding made with lobster and crayfish.

Another dish of Three-spot Swimming Crab Salad is seasoned with vinegar made from Japanese ginger, delivering a well-balanced dish with an explosion of flavours. The desserts too, do not disappoint. All made in-house, the Mille-feuille With White Chocolate And Matcha Cream comprises of layers of flaky pastry, cream flavoured with matcha from the Yame district of Fukuoka and premium white chocolate. Light and crispy, the pastry is served warm with the almost herbaceous aroma of Matcha.

Taiwanese touches are prominent in his creations. For instance, taking inspiration from his Bocuse d'Or award-winning dish, Taiwanese fruit such as dragon fruit, guava and Asian pears are added into his sushi dishes while his pan-fried rosy sea bass is seasoned with an indigenous mountain peppercorn called maqaw and buckwheat. 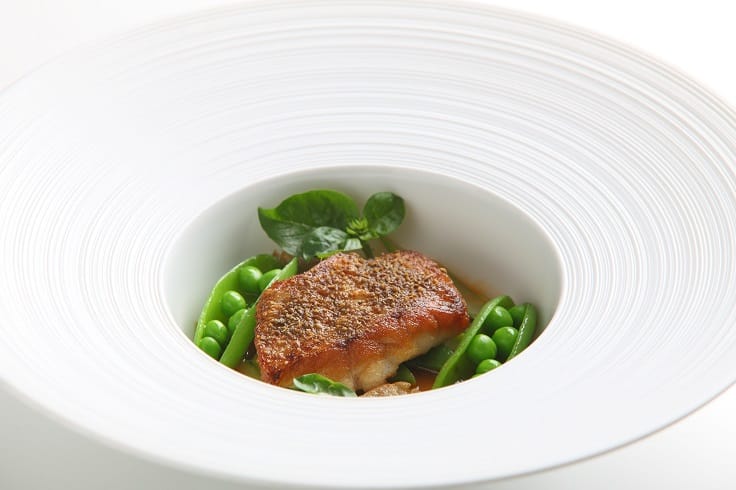 Taiwanese Tea: A Kaleidoscope Of Flavours

The subtle flavour and aromas of Taiwanese tea on the palate is one of the most distinct features of the dishes served at Paris 1930 de Hideki Takayama. As an orientation to Taiwan when he first relocated, Takayama was brought on a special culinary tour around the country by The Landis Taipei team to experience local food culture. It was on this sojourn that the chef was deeply impressed by the rich tea varieties growing in Taiwan and the spectrum of flavours it offered — influenced by the terroir, climate and handling methods. Prior to this trip, he had only tasted Oolong from Alisan, which he had received as a gift from his patrons, as well as Taiwanese tea served at three-MICHELIN-starred Ryugin in Tokyo, which was brought over from its two-MICHELIN-starred sister restaurant Shoun RyuGin in Taipei.

“Taiwanese tea runs the whole gamut of flavours, which are intimately influenced by many factors: whether the tea is fermented or not, its duration of fermentation as well as the presence of insects during the growing process. All this is very much like wine,” says the chef, also a wine connoisseur with a collection of over 5000 wines in his cellar.

Matching tea with food or infusing tea into the dishes are not uncommon practices. But Yamanaka has his creative sights set higher: not only does he want to incorporate tea in every dish, he is determined not to repeat any variety of tea or cooking method within the set menu. For instance, tea leaves can be grounded into powder, brewed in water, made into a foam, steamed or used to smoke the ingredients. Oriental Beauty tea is added while slow cooking lobster and crayfish; Tie Guanyin and Red Oolong are grounded together with mountain peppercorn and sprinkled onto beef; smoked Pu'Er Tea leaves and powdered leaves lend fragrance to the Cèpe Mushroom Consommé Flan. Even the bread course is not exempt: three varieties of tea are brewed to replace water when kneading the dough. 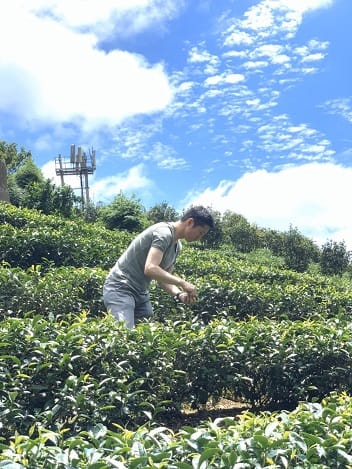 Having fallen in love with Taiwanese tea, Yamanaka incorporated tea leaf motifs in his restaurant's logo and even on the plates. At his request, the local team brought him to the best tea-producing regions to visit the farmers and handpick the finest leaves personally. Situated 400 to 500 metres above sea level, the warm and humid climate of Pinglin district in New Taipei City are best suited for tea growing. Surrounded by clouds all year round and gifted with well-irrigated soil, Pinglin is home to the renowned Baozhong Oolong Tea of Wen Shan region.

Here, he shares about his recent trip to Pinglin, giving us insight into the local culture and the culinary inspirations that arise from a chef's perspective.

Why did you feel so strongly about visiting Pinglin in person?

Upon my arrival in Taiwan, I was brought around by my team to dine at various restaurants to understand the local dining scene. I thought to myself: what can I do to create something unique here? I came upon the idea of infusing tea into my dishes and hoped to dive deeper into the topic so as to create more outstanding dishes. I’d been visiting the farmers and producers regularly back in Japan to have a better understanding of how the ingredients are produced. During my one-and-a-half-year stay in Burgundy, I visited over a hundred farms on my bicycle. Once you have a clear picture of the production process and the producers, you'll be able to integrate the ingredients into your dishes in a way that allows you to express yourself clearer to your diners. 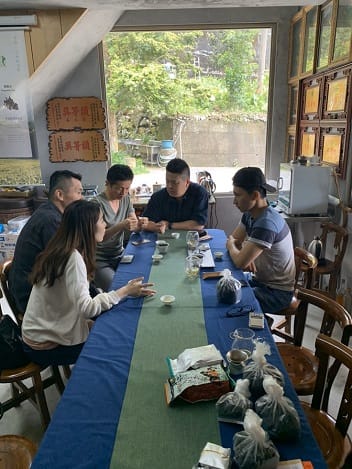 What were some highlights of the trip for you?

We visited Pinglin late in May and stayed for half a day. We had some discussions with the tea farmers (Third from the left in grey is Yamanaka), brewed some good tea and learnt how to handpick tea leaves as well. I had only heard about high-altitude tea growing regions, such as Alisan or Lisan prior to this trip. During this trip, I’ve come to know that low-altitude regions are also capable of producing a great variety of teas. I'd always thought that tea leaves are spherical (Oolong tea leaves are usually rolled into spheres during the production process), but I've learnt from this trip that tea leaves can also come in the form of strips (Baozhong tea usually comes in the form of strips, while black teas are might come loose).

What were your greatest discoveries about Taiwanese tea? How did it inspire your cooking?

Before coming to Taiwan, I was unaware of the rich and extensive knowledge and culture surrounding Taiwanese tea. All I had tried were an Oolong tea which I’ve received from my patrons as a gift, and the Taiwanese tea served in Ryugin in Tokyo. Since then, I have tasted a wide variety of tea in Taiwan and now better understand the uniqueness of each variety. It is difficult for me to pick one as my favourite, as each of them is special in their own way. For instance, Tie Guanyin has a more profound and robust flavour as compared to Oolong. Among the different Oolong teas, the Alisan varieties are slightly milder in flavour, while the Lishan varieties have a more delicate taste. As for Bi Luo Chun, it carries the mellow aroma of tropical fruits such as peaches.

French cuisine places great emphasis on balance, harmony and layers of flavours, which is exactly what I've discovered in Taiwanese tea. For instance, roasted Tie Guan Yin exudes the flavour of kelp, which makes it a suitable pairing for seafood. The delicate taste of Oriental Beauty matches my crab pudding better than Ruby Black Tea, as it will not overpower the flavour of the crustacean and instead, compliments the tomatoes well.

What is the one thing that you have to do when visiting a new place?

I will definitely visit the wet markets, as it's a place where you can really experience the seasonal changes, as they are expressed in the produce available. I'd like to visit more tea-producing regions in the future. But to be honest, I usually drink water more often when I'm off work. It is because when I drink tea, I can’t help but think about work! (laughs)

This story is written by Hsieh Ming-ling and translated by Tang Jie. Click here to read the original article.
Advertisement
Advertisement