The Bib Gourmand selection of the MICHELIN Guide Taipei & Taichung 2021 has been announced, and it consists of eateries that all offer a “value for money” experience. In Taipei and Taichung, this means that diners can enjoy a high-quality three-course meal for less than 1,000 Taiwan dollars (excluding drinks).

In this year’s Bib Gourmand selection, there are 33 locations in Taichung; 13 of them are new. Let’s take a look at what our Michelin inspectors said about them. 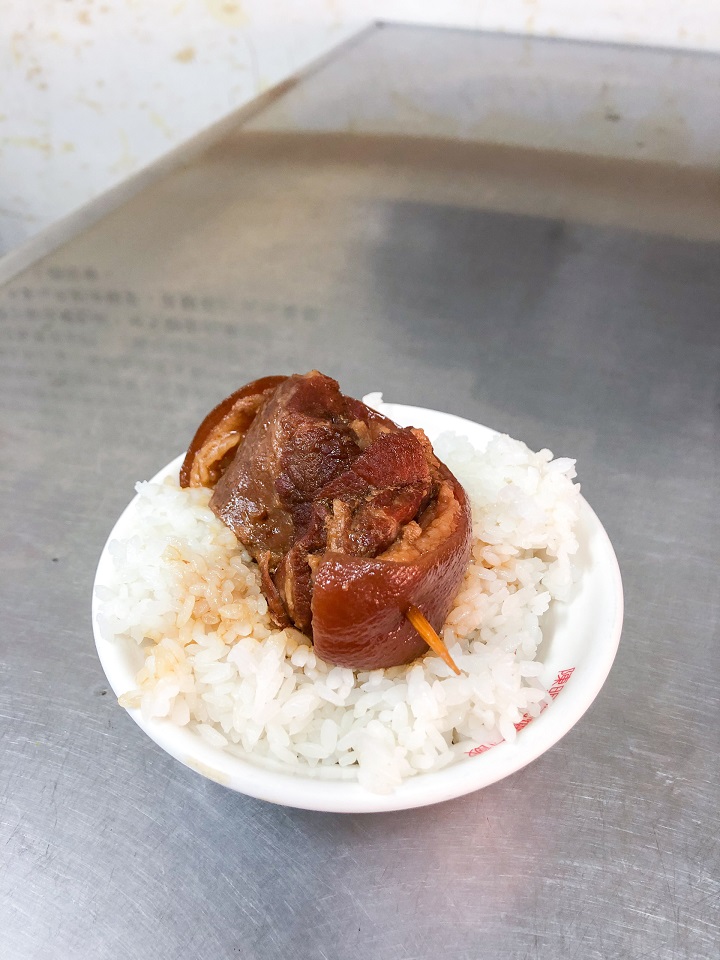 What The Inspectors Say: Steeped in history and in the collective memory of generations of Taichung citizens, this shop has been the mandatory go-to place for frugal eats for over 5 decades. Signature braised pork rice is naturally the must-order item – regulars in the know always ask for the upper thigh or belly cut; the pork is slow-cooked in earthenware pots with a secret soy marinade for three hours. Traditional sides such as braised cabbage are also great. 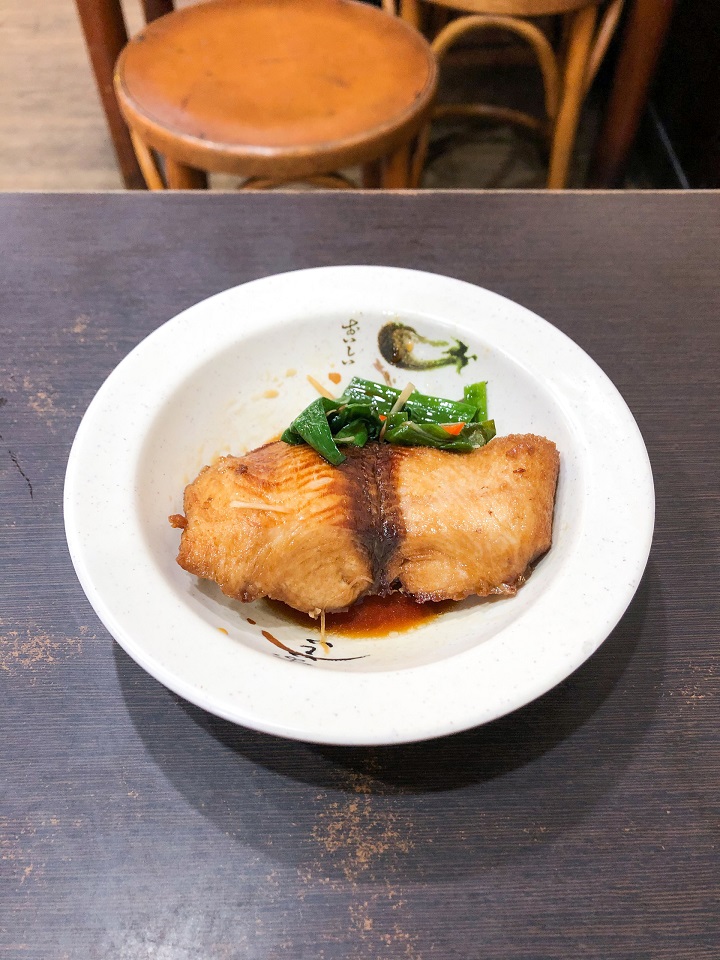 What The Inspectors Say: This simple shop specialising in Tainan cooking has been a staple on Taichung’s food scene for over 30 years. The glistening shrimp rice is flavoursome and the tiny morsels of ham pack savoury oomph. Milkfish shipped daily from the south is cooked nose-to-tail – try milkfish soup, braised milkfish belly or head, or milkfish congee. Cold sides such as braised pork sinew, and seafood like oyster, grouper and tenpounder are also popular with diners.

What The Inspectors Say: Next to a tree-lined boulevard, Gulu Gulu exudes rustic chic with its generous display of driftwood and art pieces by indigenous tribes. For over 20 years it has been serving traditional Paiwan cooking famous for chargrilled dishes such as spring chicken. Try also maqaw sausage and avay – steamed millet dumpling with pork filling wrapped in khasya trichodesma leaves. Nightly performances by indigenous singers add to the experience. 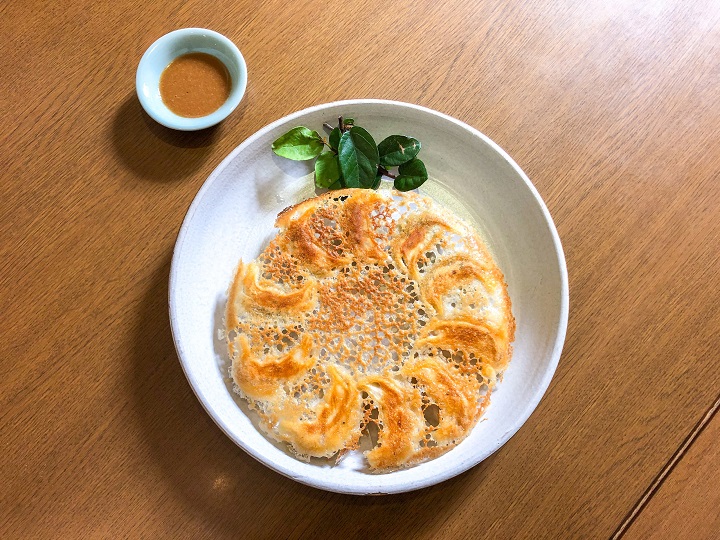 House of Dawn serves vegetarian cuisine with a keen attention to the ingredients' source and details.

What The Inspectors Say: With just 8 tables, this little gem is its owner’s pride and joy. Much effort went into the fine details – red bricks against terrazzo walls, bespoke hand-thrown ceramic dinnerware against sleek wood furniture. The aptly named "noodles extraordinaire", artisan ramen dressed in a secret chilli and sesame sauce, are quite unique. Golden, crispy potstickers take 30 minutes to prepare but are well worth the wait; don’t miss the fennel variety in winter. 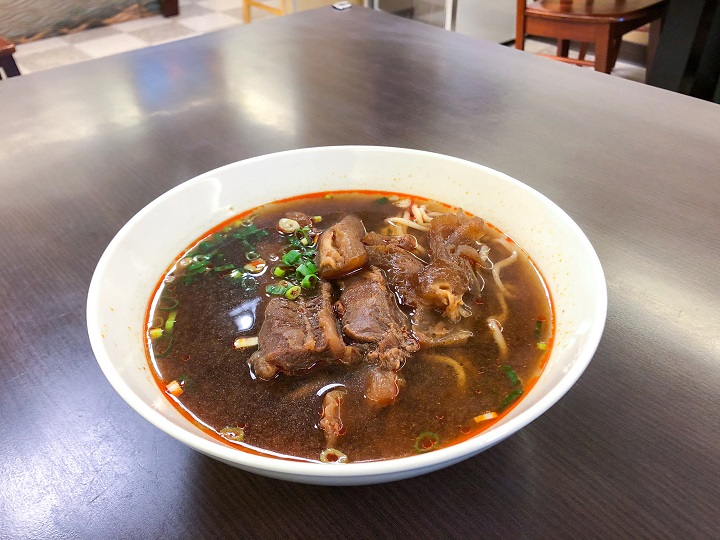 It's worth mentioning that the delicious beef noodle soup at Ke Kou Beef Noodles is boiled with more than 30 kinds of traditional Chinese herbs.

What The Inspectors Say: Both the owner and his wife are beef lovers and Ke Kou is their brainchild. The signature noodle soup with red braised beef and sinew boasts a complex and rich broth – simmered for hours with 35 different Chinese herbs – that complements the springy noodles and tender Australian beef shin perfectly. Braised ox tripe perfumed with spices and herbs, and the seemingly simple kelp that imparts an intense savoury-sweet flavour are recommended. 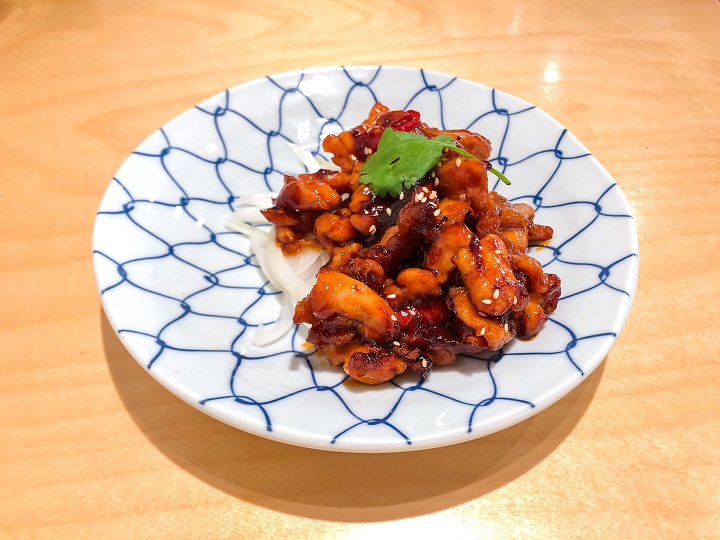 What The Inspectors Say: The unpretentious Küisine emphasises home-like cosiness and intimacy. It’s tucked away in a residential alley and the room feels serene and relaxing. Apart from Taiwanese classics such as plum chicken, and braised beef and fried tofu, Southeast Asian and Japanese influences are also evident in curry, shogayaki and miso dishes. Portion sizes are on the small side so that guests can sample more variety. 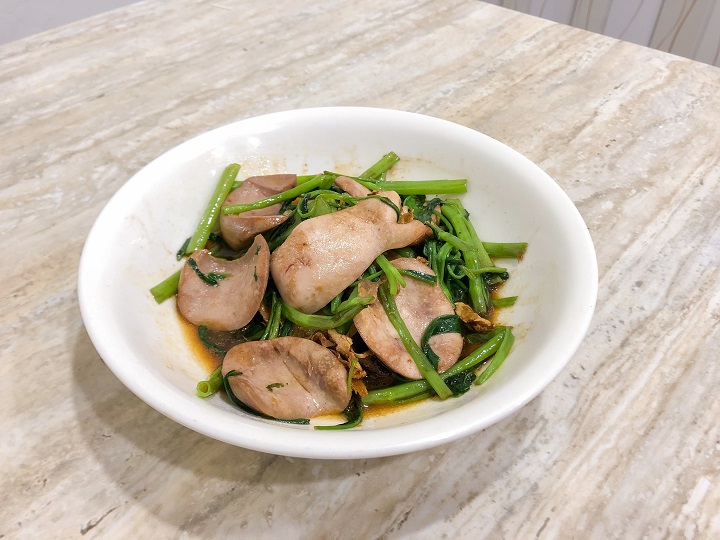 What The Inspectors Say: Sesame oil lover alert: with a bright yellow sign that’s impossible to miss, this no-frills shop is famous for dishes cooked with the earthy, nutty liquid gold. Signature sesame oil chicken leg soup is simmered for a whole day and emits a mild winey aroma and a variety of herbal scents; throw in noodles for a complete meal. Stir-fries such as pork liver, heart and shoulder butt, or offal like pork kidney in sesame oil broth are also impeccably made. 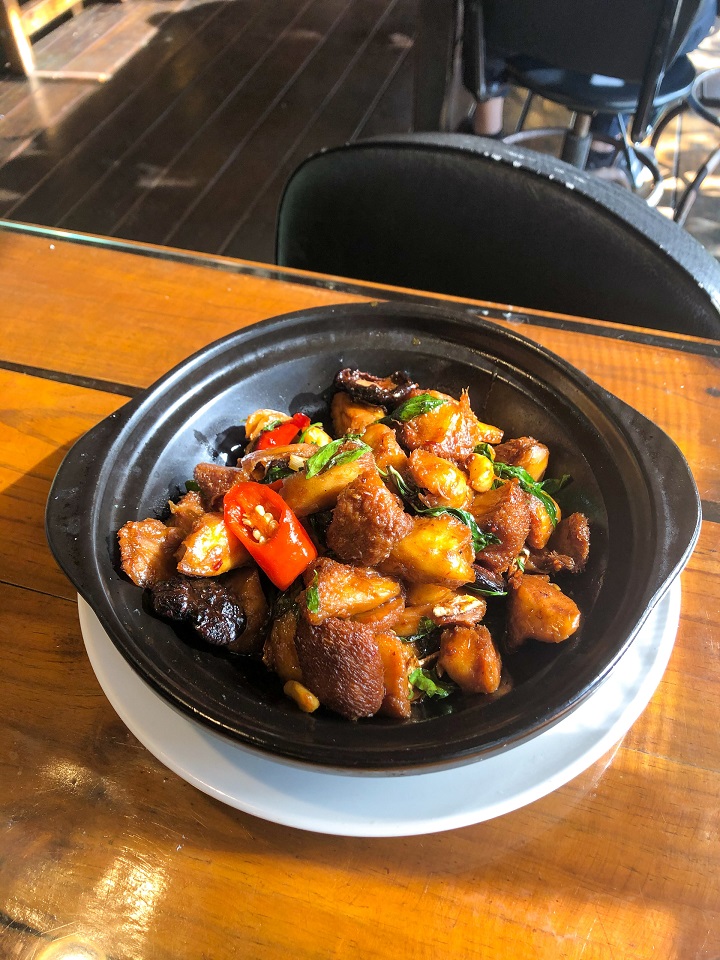 What The Inspectors Say: In 2006, a mushroom farmer opened this mushroom-themed restaurant in Xinshe, the mushroom capital of Taiwan. Free-range chicken soup with shiitake tastes rich and flavoursome, while dried day lily flowers and assorted mushrooms add to the complex taste profile. Try also three-cup monkey-head mushrooms, and mushroom minced pork rice. Adjacent to the Sea of Flowers and Dakeng, it makes a great stop to recharge your body after a day out. 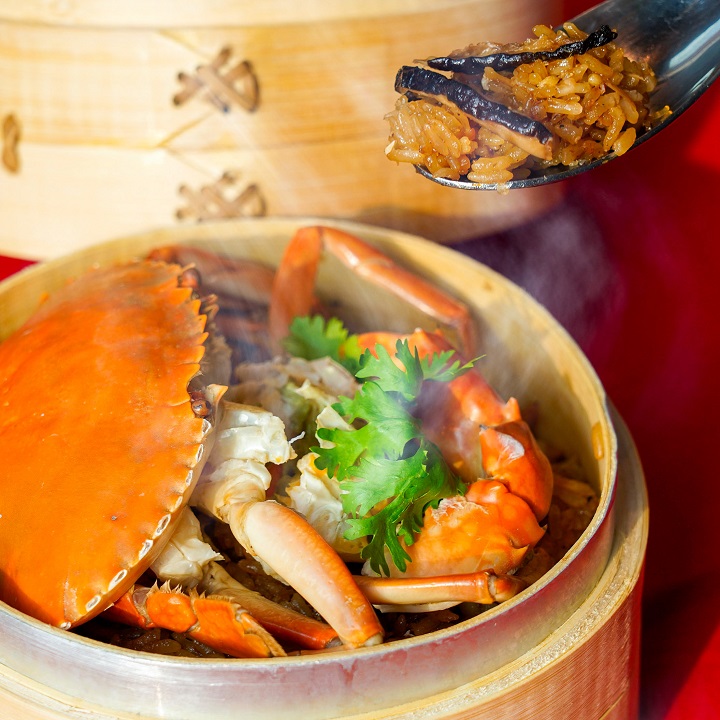 What The Inspectors Say: In a restored century-old eye clinic, Moon Pavilion juxtaposes colourful velvet banquettes with original wrought iron and red bricks for an interesting clash between the industrial and the Victorian. The food pays tribute to the old-time Taiwanese palate, showing delicate balance and shrewd judgment. Pan-fried butterfish over rice noodles, and three-cup chicken are the must-tries. Save room for the famous ice cream with countless toppings. 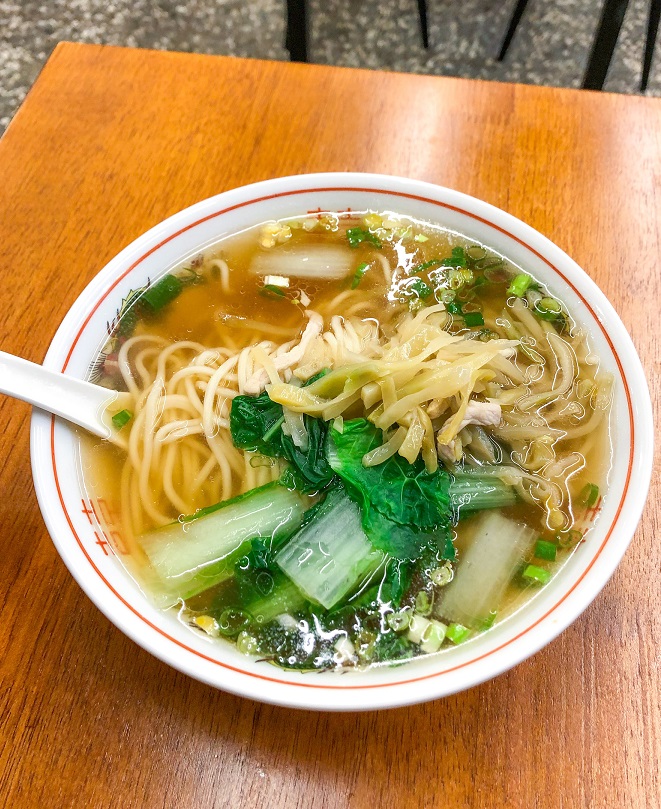 What The Inspectors Say: Thanks to terrazzo floor tiles, metal tube frame furniture, and golden oldies on shuffle, the ambiance is unmistakably 1960s. The teacher-turned owner opened this shop as he missed the authentic Jiangzhe noodles his father-in-law used to make. The springy noodles swim in an aromatic broth that has exceptional depth. Order noodle soup with fried pork chop, shredded pork and pickled mustard stem, or a side of soy-marinated meat. 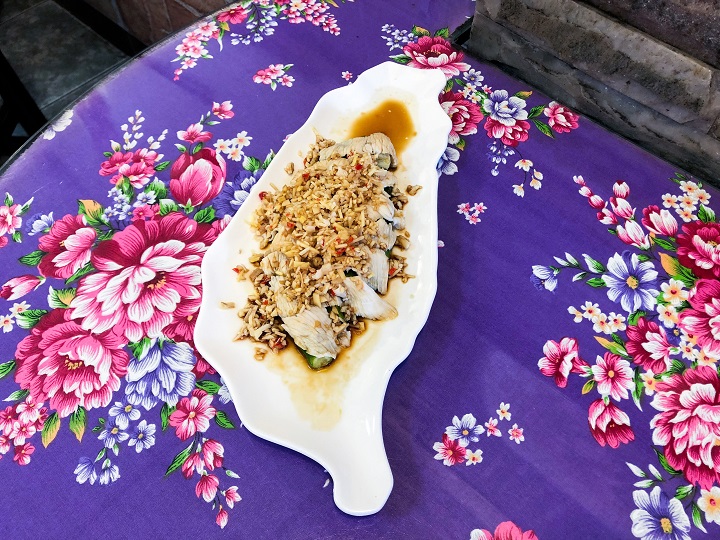 What The Inspectors Say: This 60-year-old household name was seriously damaged in the 921 earthquake. The third-generation owner then spent two years on reconstruction and hired graffiti artists to paint the colourful murals. Today, it still prides itself on the traditional Hakkanese way to cook local yellow beef nose-to-tail. The offal is unmissable – try scallion bone marrow, and cold beef tripe dressed in sweet and sour sauce. And take home some beef jerky and offal chips. 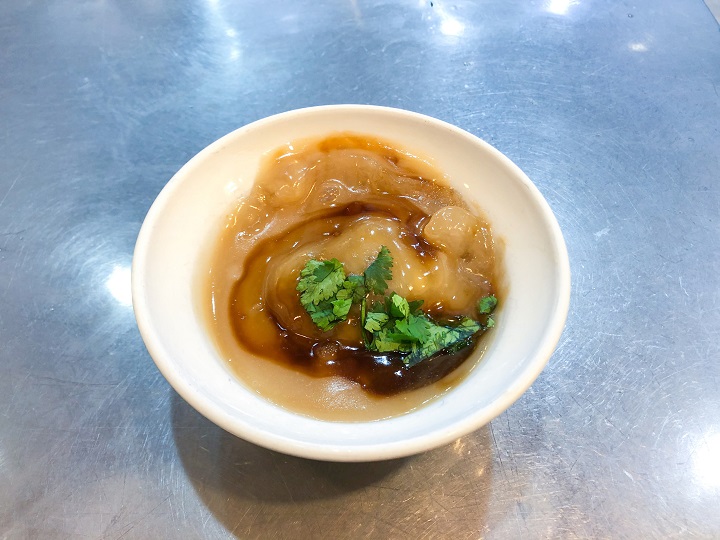 What The Inspectors Say: One of the best known places for frugal eats, this veritable institution has been around since 1933 and holds a special place in every Taichungese’s heart because of its no-frills tasty food. There are only three items on the menu – the meatball, fish ball soup and glass noodle soup. The meatball is something of a misnomer as it’s closer to a big translucent dumpling with peppery ground pork filling topped with thick soy and sweet sauces. 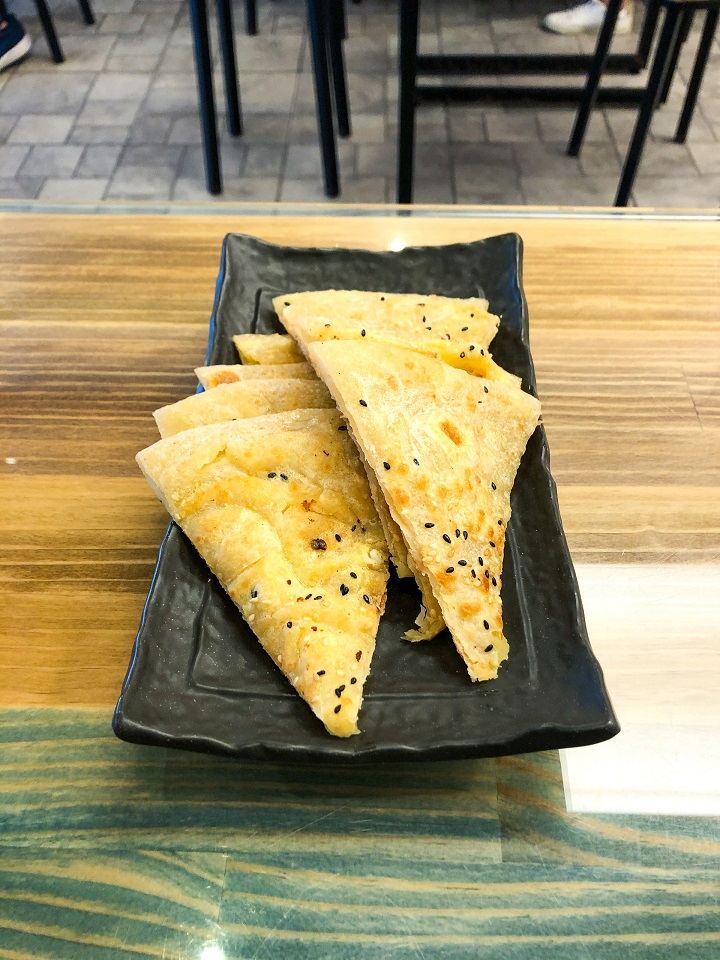 What The Inspectors Say: Once a street stall, this shop has been feeding hungry locals with no-frills noodles and dumplings at affordable prices for over 20 years. Signature xiao long bao boast soupy pork filling wrapped in pleated translucent skin – choose from the 20 different sides offered each day and make sure you snatch the sliced pork liver if you see it. Mung bean paste pancake, noodles tossed in mala sauce, and Fuzhou tossed noodles are also popular.

The full selection of the MICHELIN Guide Taipei & Taichung 2021, including its Starred restaurant selection, was announced online via a digital ceremony on August 25, 2021. Watch the replay.